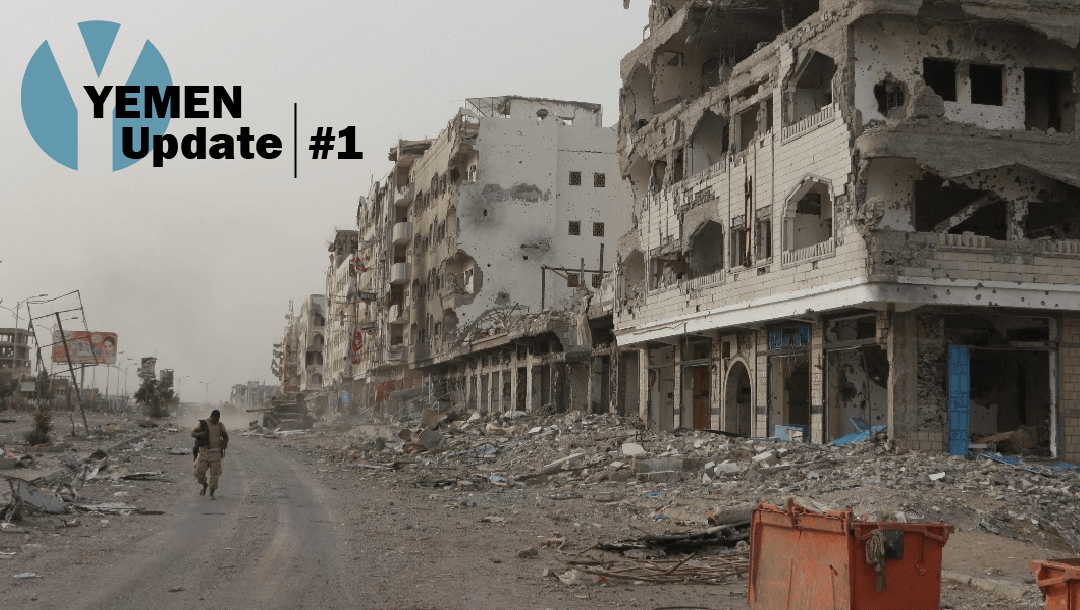 As part of its Yemen Campaign, Crisis Group will be publishing a weekly update on Yemen, providing up-to-the minute insight and analysis of the latest events in the country’s four-year-old civil war, which has sparked the biggest humanitarian crisis in the world. This is the first update.

For more than six months the primary focus for diplomats, policy makers and analysts working on Yemen has been the now-frozen offensive on the Red Sea port city of Hodeida. Then, in December, the Yemeni government and Huthi rebels who overthrew the government’s leader, President Abed-Rabbo Mansour Hadi, in January 2015, agreed to a deal, the so-called Stockholm Agreement, that prevented a battle for the port and city.

(You can read our analysis of why Hodeida is important here, and what was in the agreement here. The UN, which brokered the deal, has since struggled to turn the agreement into a reality. You can learn more about the barriers to implementation here.)

Even if the Stockholm Agreement can be made to stick, fighting is likely to continue in other frontline areas, while tensions also remain high among ostensibly allied pro-government Yemeni groups across the south and in Taiz city.

The Yemeni government and the Huthis have told UN Special Envoy Martin Griffiths that they do not want to hold a second round of talks, originally scheduled for the end of January, until progress had been made on the Hodeida agreement – and Griffiths agrees. Preparations for the next round are continuing, with Germany, Kuwait and Switzerland mentioned as possible locations.

Meanwhile, the UN held meetings between Huthi and Hadi government delegations in Jordan to discuss a planned prisoner swap of as many as 16,000 people, as agreed in Sweden in December. These talks ended amid all-too-familiar mutual recriminations. Yet Griffiths described the discussions as “upbeat”, and another round of meetings on a prisoner exchange is likely to take place in February.

The Redeployment Coordination Committee (RCC), a Huthi-Hadi working group formed to work out the details needed to implement the Hodeida part of the Stockholm Agreement, has met only twice thus far: in late December and in early January. The committee, which is chaired by the UN’s Patrick Cammaert, has not met since, because Huthi participants refused to cross frontlines into territory controlled by their rivals, citing security concerns (Hadi government representatives had crossed the frontlines into Huthi-controlled territory for the previous two meetings). Cammaert subsequently shuttled between the parties but soon reached an impasse. A key sticking point was the thorny issue of which “local forces” will control Hodeida port and city and nearby port facilities at Salif and Ras Issa following a Huthi withdrawal. Both sides have a different interpretation of what they agreed to in Sweden.

Cammaert has now submitted a proposal to the RCC on how to move things forward, which is yet to be made public. Griffiths then flew to Sanaa on 21 January to obtain Huthi buy-in for Cammaert’s proposal before heading to Riyadh to get the Saudis on board. Both the Huthis and the Saudis reportedly indicated their approval.

Fresh momentum cannot come soon enough. Coalition officials, particularly from the United Arab Emirates (UAE), have warned that if the parties fail to make progress soon on redeployments from Hodeida, the coalition parties and their Yemeni allies will return to hostilities. While this could be a tactical move to maintain pressure on the Huthis, it could well turn into military action if a negative momentum builds. For now, however, coalition officials remain committed to seeing the Stockholm Agreement implemented.

Even as rival forces have traded accusations of hundreds of ceasefire breaches since the truce was announced on 18 December (read more here), developments outside of Hodeida continue to arouse concern. The coalition launched a blistering series of airstrikes in and around Sanaa overnight between 19 and 20 January, in apparent retaliation for Huthi drone and ballistic missile attacks on Yemeni government and coalition positions in Lahj and Taiz governorates, as well as Saudi Arabia’s Asir province, over the previous days and weeks. The air war has been accompanied by heavy fighting at key frontlines: Buqa and Baqim on the Saudi-Yemeni border, al-Jawf, Nihm and Sirwa on the easternmost edge of the Huthi area of territorial control, around Taiz city, and in Damt district in al-Dhalea governorate, along the old north-south border.

Local media reports suggest that clashes also occurred between rival southern Yemen groups in Shabwa governorate in early January, continuing a pattern of skirmishes involving ostensible allies on the government/coalition side that may foreshadow future internal conflict if not carefully managed.

On 16 January, the UN Security Council adopted Resolution 2452, the second of two resolutions on Yemen in a month, approving the United Nations Mission to support the Hodeida Agreement (UNMHA), to be composed of as many as 75 persons, with a six-month mandate, as Secretary-General António Guterres had requested. There is a good possibility that Cammaert will not stay on to lead it, and a successor is currently being sought. The UAE sent a letter to Security Council member states on 17 January, restating its commitment to the ceasefire and the Stockholm Agreement but condemning alleged Huthi infractions and hinting at a potential military response.

In Washington, deliberations continue in Congress over new legislation on Yemen. Members and their staff in the House and Senate are discussing different possible bills, but right now the furthest advanced appears to be a new version of the war powers–related legislation that the Senate passed late in the last Congress, and that House progressives are working to refine. This legislation would invoke the War Powers Resolution of 1973 in directing the U.S. to remove armed forces from hostilities in Yemen. (The executive branch has claimed, however, that U.S. forces aren’t participating in hostilities.)  Separately, it remains to be seen who will take up the leadership in the executive branch of pushing the peace process forward with Jim Mattis’ departure from the Department of Defence.

In Brussels, the EU Foreign Affairs Council briefly tabled the situation in Yemen at a meeting on 21 January. EU ministers discussed preparations for a ministerial meeting with representatives of the League of Arab States (LAS) in Brussels on 4 February and the first ever summit between the EU and the LAS scheduled to take place in Sharm el-Sheikh, Egypt, on 24-25 February, with the Yemen war on the agenda along with other Middle East conflicts.