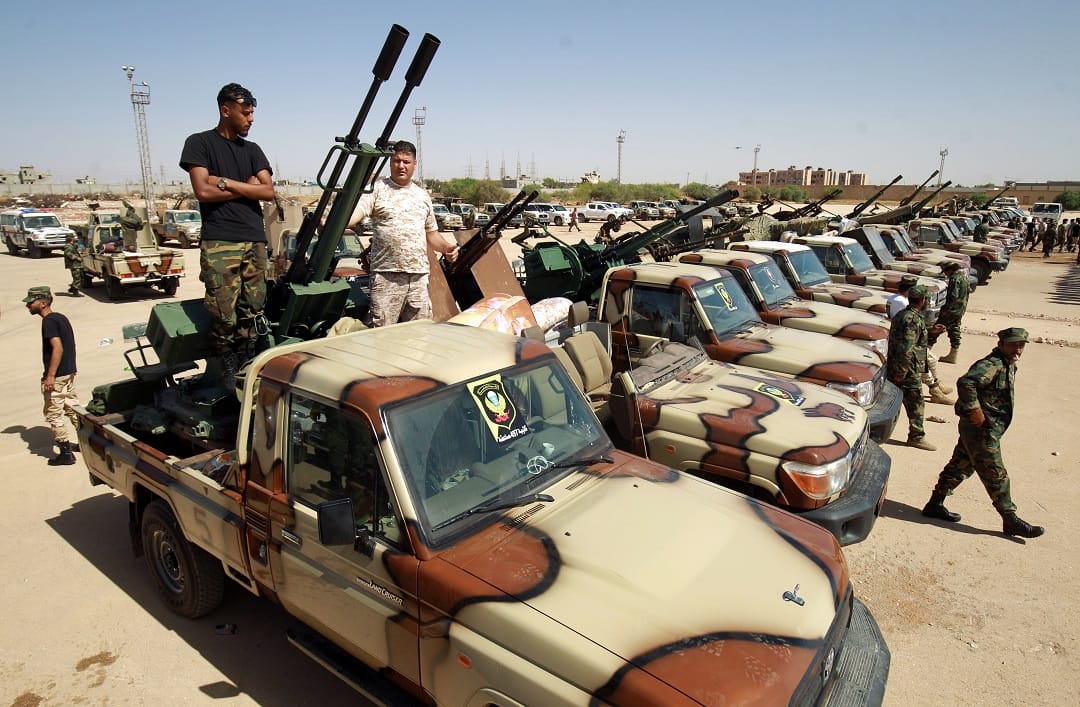 Members of the self-proclaimed eastern Libyan National Army (LNA) special forces gather in the city of Benghazi, on their way to reportedly back up fellow LNA fighters on the frontline west of the city of Sirte. Abdullah DOMA / AFP
Statement / Middle East & North Africa 27 July 2020

On 20 July, Egyptian legislators authorised sending combat troops to Libya, where Cairo’s ally Field Marshal Khalifa Haftar is on the defensive. Following Turkey’s intervention on the Tripoli government’s behalf, Egypt’s involvement could escalate the war dramatically. All parties should seek a compromise.

Egypt’s threat to send its army into neighbouring Libya is a predictable and understandable but dangerous response to Turkey’s deepening military involvement that risks embroiling both countries in a costly war. Cairo has warned that it will intervene directly should Turkish-backed forces loyal to the Tripoli-based government try to retake key locations in central Libya and nearby oil installations now under the control of an Egyptian-backed rival coalition led by Field Marshal Khalifa Haftar. As Egypt sees it, a Turkish-backed advance into central Libya would cross a red line, endangering its border and national security. Both Ankara and Cairo should take a step back and seek a settlement on the status of central Libya’s strategic sites, including its prized oil assets. Foreign capitals with close ties to both countries should help them de-escalate tensions and reach such an accommodation. The alternative is to further regionalise what has become an unwinnable war.

The latest tipping point in the six-year Libyan conflict came on the heels of the pro-Tripoli coalition’s successful counteroffensive in western Libya, made possible by support from the Turkish army and the Syrian fighters on its payroll. Ankara’s deployment came in response to a request for help from the government of Prime Minister Fayez al-Serraj in Tripoli in early 2020. The overt nature of its intervention, sanctioned by a Turkish parliamentary vote, enabled Turkey to dispatch military assets more rapidly and with greater freedom than its regional adversaries.

Fresh from its military win, the Tripoli government is now insisting that Haftar’s troops pull back from the former Qadhafist stronghold of Sirte and the Jufra air base in central Libya, both used by Haftar’s foreign backers as operational hubs. In addition, Tripoli wants Haftar’s forces to withdraw from the nearby “oil crescent” as a precondition for a ceasefire. These requests mark a shift from the Serraj government’s previous demand that Haftar move his troops back to their pre-April 2019 positions, before the Tripoli offensive, when both the oil crescent and Jufra were still under his coalition’s control. The explanation for this change is not hard to discern: Ankara and Tripoli now believe they can not only beat back but defeat Haftar, despite the support he enjoys from Egypt, the United Arab Emirates (UAE), Saudi Arabia, Jordan, Russia and France. Although Tripoli has nominally laid out its conditions for a ceasefire, it continues to reject political negotiations with the Haftar camp, blaming it for waging a year-long offensive that killed at least 3,000 people, both civilians and combatants. By imposing new ceasefire terms that it knows will be hard for the Haftar camp to accept, Tripoli is hoping to legitimise its refusal to negotiate.

A major driver behind a new flare-up in fighting would be the desire to control oil facilities and revenues.

A major driver behind a new flare-up in fighting would be the desire to control oil facilities and revenues. Haftar’s withdrawal from the oil crescent would amount to handing over the country’s main oil facilities to Tripoli. Haftar’s forces imposed a blockade on oil exports in January to protest Tripoli’s alleged misuse of oil revenues, including purportedly to fund Turkish military efforts in Libya. The blockade has almost completely halted oil exports, bringing down daily production from around one million barrels to just 100,000 barrels, and causing revenues (already affected by low international oil prices) to plummet.

For regional actors, Egypt in particular, the stakes transcend Libya and its oil sector. Their main concern is defending their vision of the regional order. Egypt and its Arab allies – Saudi Arabia (which has provided political and financial support), Jordan (under-the-radar military support) and the UAE (financial and military assistance) – oppose the presence of Turkish forces and pro-Ankara Syrian fighters in Libya and see the Syrians, in particular, as militant Islamists. Egypt considers an expanded Turkish military presence in central Libya to be a potential threat to its own national security. It fears that a Turkish-backed offensive could alter the power balance in eastern Libya, allowing pro-Tripoli forces to use this area as a staging ground for attacks inside Egypt. Egypt’s Arab allies share these views, while France is especially concerned with the conflict’s ripple effects in southern Libya, which borders Chad, an important ally.

These preoccupations have pushed Cairo to take the unprecedented step of preparing for an openly declared military intervention, rather than continuing to back Haftar’s forces covertly. Egypt did not consider taking this step even in 2015, when the Islamic State took over Sirte and established a presence in Benghazi. Cairo is now trying to match and counter Ankara, which it sees as a regional sponsor of the Muslim Brotherhood, the Egyptian government’s mortal enemy.

Egypt is relying on eastern Libya’s parallel governing institutions to provide a veneer of legitimacy for its intervention. On 13 July, the Tobruk-based House of Representatives officially asked Cairo to intervene. A few days later, President Abdelfattah al-Sisi met with a delegation of tribal leaders from eastern Libya in Cairo, who likewise called on Egypt to step in. Tripoli slammed both appeals as illegal, pointing out that tribal leaders have no official authority and that the east-based parliament, whose active members number no more than 40 of the 200 nominal parliamentarians, held no vote on its request. Regardless, on 20 July, the Egyptian parliament responded by authorising the deployment of Egyptian troops for combat missions outside the country to defend its national security against “criminal armed militias and foreign terrorist elements”. In escalating rhetoric, the Tripoli government condemned this decision as “a hostile act and direct interference, amounting to a declaration of war”.

Military experts believe that Cairo is likely to limit its intervention to securing the border area inside Libya. It could back up such an operation with airstrikes upon pro-Tripoli forces, should they seek to advance. With Sirte located 1,000km from the Egyptian border, deploying troops to central Libya would pose significant logistical challenges for the Egyptian army, lengthening supply lines and promising only inconsistent air cover to ground troops. A more expansive intervention should not be excluded, however, one that could expose Egyptian troops to a direct confrontation with the Turkish military and affiliated Syrian fighters in central Libya. Private military contractors of the Russian-owned Wagner company are also consolidating a presence in central Libya, reportedly operating fighter jets in Jufra and bringing in reinforcements to Sirte and the oil terminal areas in a bid to bolster the Haftar forces’ positions there.

The repercussions of a resumption of hostilities for the local civilian population would be catastrophic.

The repercussions of a resumption of hostilities for the local civilian population would be catastrophic. The growing involvement of conventional armies raises the spectre of intensified violence, particularly in the residential areas of Sirte. Likewise, Egypt’s rumoured plan to transfer weapons to eastern Libyan tribal groups risks unleashing even more local violence and retaliatory measures against civilians. Renewed fighting in the oil crescent could also result in hard-to-reverse damage to hydrocarbon facilities; while secondary to humanitarian concerns, such damage would be worrying, as it could stanch the flow of financing critical for Libya’s long-term economic viability and standing. Finally, with Turkish and Egyptian troops potentially coming into close contact and pro-Russia private military fighters also in the fray, the risk of a wider regional confrontation looms.

All sides ought to take immediate de-escalatory steps to minimise these risks and save civilian lives. Tripoli should freeze its military advance in central Libya and pursue a negotiated agreement on Sirte and Jufra, both now under the control of pro-Haftar forces aided by Wagner fighters. In Sirte, such an accord could entail Haftar and the forces backing him withdrawing from the area, to be replaced by a limited pro-Tripoli military presence that would leave out Turkish-backed forces and hardware; in Jufra, an agreement could allow for a symbolic presence of Haftar-aligned fighters with guarantees that foreign forces currently operating there move out. This would be one step toward a partial demilitarisation of central Libya rather than the full demilitarisation that Berlin and Washington have advocated but which would be difficult to achieve.

At the same time, the sides should come to a resolution to the oil sector standoff. Egypt should seek to convince Haftar and its other regional allies to drop their demand to see profits redistributed between western, eastern and southern Libya (in the absence of a legal framework that would regulate this arrangement), and instead accept a compromise agreement put forward by the U.S., UN and Libya’s National Oil Corporation (NOC). This proposal envisages reopening oil production and exports in exchange for placing future oil revenues in a NOC-held account for 120 days rather than in the Tripoli-based central bank, as a means of reassuring Haftar as to how such funds would be used. Supporters of this plan believe that the timeframe would allow for negotiating a new line-up of the central bank’s top management as a possible precursor to reunification of the bank, which split into two parallel and competing institutions after 2014. This deal would also mean that, for now, Haftar-led forces remain in charge of the sites.

Such arrangements would fall short of what each side wants, but they could pave the way for a negotiated way forward. Moreover, acceptance of these arrangements would help build much-needed confidence between the two coalitions and their respective backers. From Cairo’s perspective, conceding on Sirte and Jufra and persuading the Haftar camp to accept an oil deal would also spare Egypt and its Libyan allies from the many unknowns that a military adventure would entail. For Ankara and Tripoli, a symbolic return to Sirte and acceptance of a semi-demilitarised Jufra would guarantee that these sites would not be used for military offensives aimed at taking Tripoli or Misrata, while an oil deal would provide much-needed revenues to sustain public-sector salary payments.

As for Turkey, it should be wary of overreach. Its authorities have made clear that they will not consider Haftar, or anybody else in his camp, as negotiating partners. Instead, they say they want to restore the Tripoli government’s control over all of Libyan territory. Their strategy is wearily familiar: reestablishing their proxy’s military superiority with the aim of going back to the negotiating table from a position of strength. The problem with this approach is that the other side and its foreign backers are unlikely to accept a lopsided negotiation, as the past years of conflict and diplomacy in Libya have shown. Eventually, a new cycle of violence almost certainly will emerge, as the opposing side tries to level the playing field by counter-escalating. Turkey should avoid falling into this trap and instead push its allies in Tripoli to accept a compromise solution on central Libya’s security arrangements and oil revenues that could lead, at a later stage, to a comprehensive military and political agreement to reunify the country.

With each new intensification of the conflict, the opportunity for compromise seems ever more remote, while the risk of a larger regional war looks ever greater. If there still is a chance to reverse course, regional actors should jointly take it – now – or find themselves mired in an endless regional confrontation.