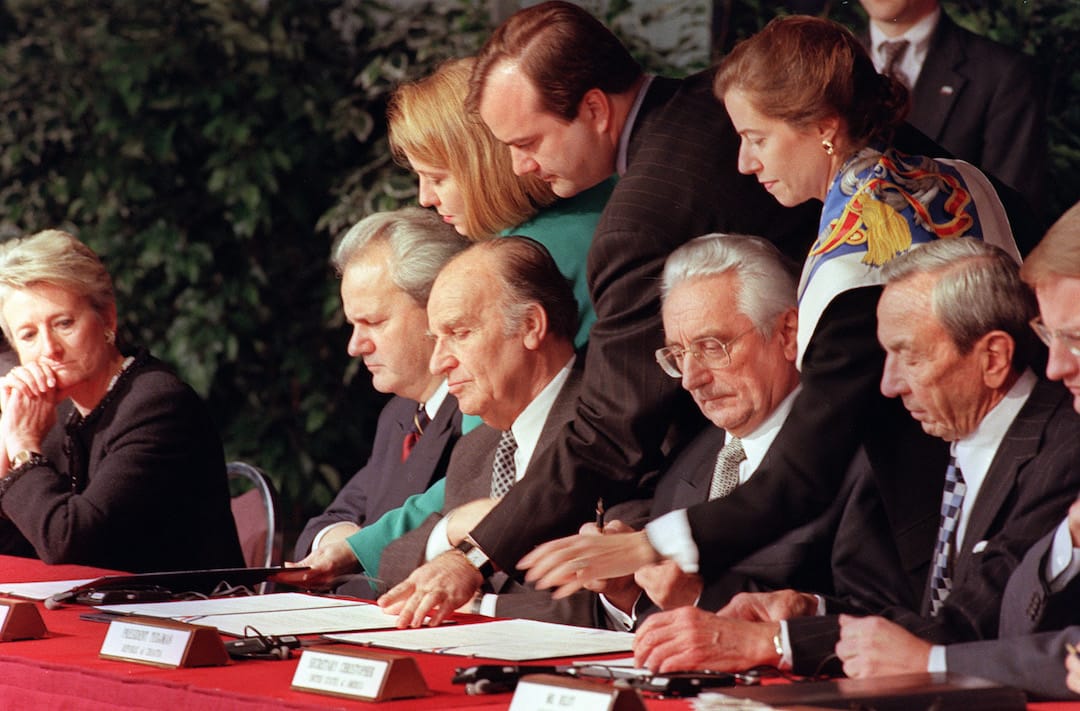 Once Upon a Time, There Was a U.S. Foreign Policy Triumph

Laurel Miller, our Asia Program Director, draws from her experience of the 1995 Dayton negotiations to highlight key components of a past U.S. foreign policy success. She served in the U.S. State Department under three administrations, most recently as acting Special Representative for Afghanistan and Pakistan.

American foreign policy in the last two decades has produced more spectacular disasters, decidedly mixed outcomes and rapidly reversed feats than significant and enduring achievements. Iraq, Afghanistan and the Iran nuclear deal are only the leading examples of these poor results. Fault can be found in bad policy choices, especially over-reliance on force, irrational exuberance about U.S. ability to impose its will after winning the Cold War and domestic political polarisation.

As a new administration reconsiders what the U.S.’s role in the world can and should be in the aftermath of Trump’s myopic and stingy outlook, these much-debated failures will surely get a close look. But past successes also should be mined, to try to understand how they happened and why their numbers have diminished.

With few exceptions, the last grand U.S. foreign policy achievement was brokering an end to the Bosnian war.

With few exceptions, the last grand U.S. foreign policy achievement was brokering an end to the Bosnian war, a quarter-century ago this month. As an adjunct to that success, the U.S. subsequently consolidated the regional settlement begun with the Dayton Peace Agreement by liberating Kosovo and heading off civil war in what is now North Macedonia.

Bosnia continues to be a political and economic mess and the Kosovo-Serbia divorce is still contested. But the guns have remained silent. After wars in which more than 100,000 lives were lost, the lasting peacefulness is an undeniable accomplishment.

The centrality of the U.S. contribution to that accomplishment is undeniable, too. As Yugoslavia began disintegrating and violence erupted in 1991, the U.S. remained largely aloof. Europeans led diplomatic attempts to head off fighting and, when that failed, to mediate a political settlement. The UN deployed a civilian protection force, without American participation. As the war dragged on, however, U.S. diplomatic involvement stepped up, and by early 1995, star envoy Richard Holbrooke was leading a concerted effort to end the war in Bosnia.

After months of Holbrooke’s shuttle diplomacy laying the groundwork, a remarkable assemblage of characters agreed to sequester for peace talks at an Air Force base in Dayton, Ohio, in November 1995: the presidents of Serbia and Croatia, leaders of the Bosnian factions and senior European and Russian diplomats, with U.S. Secretary of State Warren Christopher joining at key moments. As a young member of the U.S. delegation’s small squad of lawyers, I took it for granted – too much I now know – that this sort of high-stakes, high-wattage negotiation is how diplomacy is done. Twenty-one days of talks produced a comprehensive accord, formally signed in Paris on December 14.

The U.S. dove into Balkan diplomacy because decision-makers at the time defined U.S. interests in a broad light.

The U.S. dove into Balkan diplomacy because decision-makers at the time defined U.S. interests in a broad light. A humanitarian motivation, because of the tragedy unfolding, was part of it. But more significantly, leaders saw that close security, economic and cultural ties meant that what is good for Europe and the trans-Atlantic alliance is good for America – and the Balkans was a bleeding wound within Europe.

In ending the wars that ended Yugoslavia, the U.S. demonstrated leadership in pursuit of shared interests, and allies bent toward American leadership to a degree that is jarring to recall in the present moment of American unilateralism.

That’s not to say that Washington was starry-eyed about the bond with Europe. New to diplomacy, I was startled by U.S. officials’ private tendency toward snarkiness about their European counterparts being indecisive, disunited and overly consensus-driven. At Dayton, collaboration with allies was more performance than reality; the U.S. catalysed the talks, and Holbrooke was their undisputed ringmaster.

But, at the same time, in the lead-up to Dayton and even more so during the tortuously difficult implementation of the peace agreement, there was genuine and intensive coordination of objectives, tactics and public messages. The Dayton agreement created, and the U.S. participated in, a complex multilateral international oversight and security mechanism to ensure that the new constitution would remain supported and viable. The diplomacy that resolved the conflicts in Kosovo and Macedonia involved even closer U.S.-European collaboration, reaching a level of joint venture in the latter case. For Kosovo, the U.S. worked with key European allies in using the UN Security Council to authorise the creation of an international civilian and security mission that would oversee transition to self-governance. The authorising resolution, which was negotiated at the foreign minister level, was de facto the peace agreement that settled the conflict. In other words, the U.S. utilised, and led efforts in, a variety of multilateral institutions and mechanisms to achieve foreign policy successes in the Balkans.

Crucially, the U.S. also pursued realistic objectives. Success seemed far from a foregone conclusion during the Bosnia negotiations, but U.S. diplomats recognised that the task was to end a war, not to perfect a society, and they did not over-reach in the deal they forged. The Dayton agreement, with the convoluted and stalemate-prone constitutional structure it emplaced, is imperfect because the warring parties weren’t willing to better it. But it was sufficient to stop the bloodshed.

Ambitions for pacifying Bosnia were scaled to the amenability of conditions in the country – in contrast to later nation-building misadventures in Iraq and Afghanistan.

Ambitions for pacifying Bosnia were also scaled to the amenability of conditions in the country – in contrast to later nation-building misadventures in Iraq and Afghanistan. Deployment of a large (compared to the population) NATO peace implementation force and delivery of relatively lavish reconstruction aid were feasible for a middle-income country, slightly smaller than the U.S. state of West Virginia, with just a few million people. And there was the likelihood that European governments’ interest in consolidating the peace in their own orbit would be sustained for a long time.

Washington mounted its peacemaking project the right way, too, with a fully empowered envoy, leading a team drawn from across the national security agencies and manifestly backed by the president. In other words, it brought together all the levers of American power in service of diplomacy. By committing 20,000 of its own to the initial 60,000-strong implementation force, the U.S. also put its own skin in the game for the hard work of getting the peace agreement to stick. This enhanced U.S. credibility as a serious and honest broker.

It also helped that, because the U.S was not a party to the conflict and arguably did not have direct security interests at stake, the compromises American diplomats pressured and cajoled the parties to make were not going to draw great controversy at home.

That the Dayton peace process worked does not mean it provides a blueprint for other contexts. But it does provide a touchstone, by exemplifying the potential effectiveness of the instruments of U.S. power working together, with diplomacy at the forefront, political backing, realistic goals and in concert with allies.