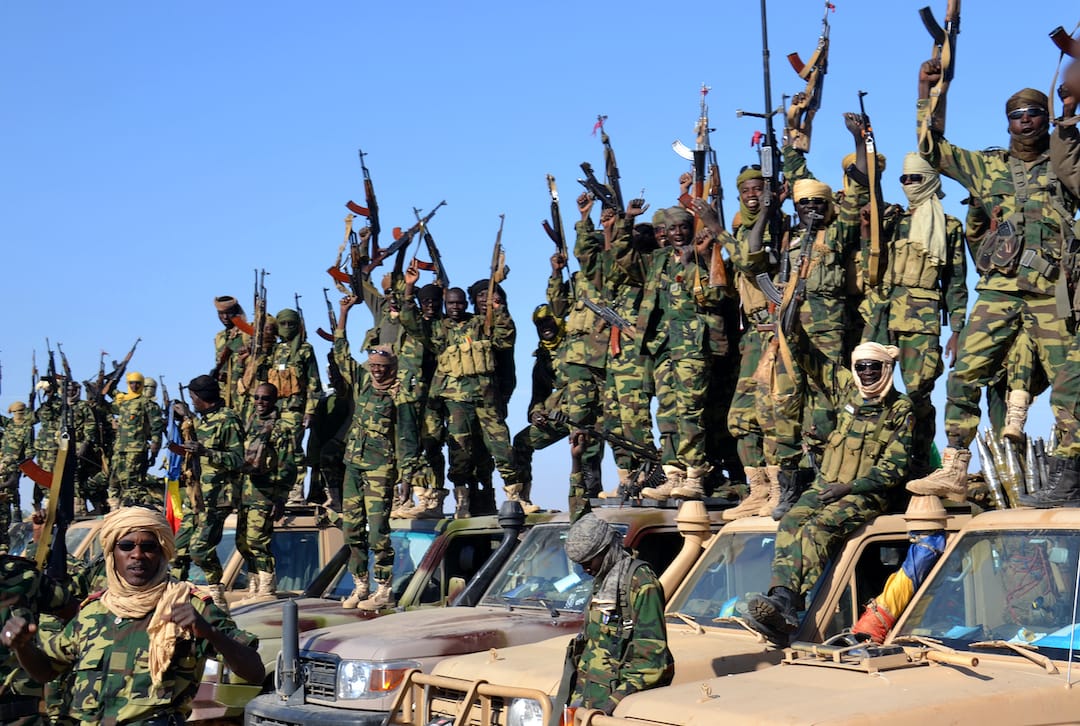 Chadian soldiers gather on 1 February 2015 near the Nigerian town of Gamboru, just across the border from Cameroon. AFP / MARLE
Report 298 / Africa 22 January 2021

The Chadian army, while essential to counter-terrorism operations in the Sahel, is also a source of potential instability for the country. Chadian authorities, supported by their international partners, should build a more representative and professional army, and establish safeguards to discourage violence in the event of a succession crisis.

What’s new? The Chadian army is often called upon by its neighbours and Western partners to help carry out counter-terrorism operations in the Sahel. But its general cohesion is weak, with recurring ethnic tensions and lack of discipline. Of late, dissenting voices have emerged from its ranks.

Why does it matter? The army’s future is a pressing question since Chad will soon enter a period of uncertainty: in the short term, the 2021 presidential election will take place amid growing social tension; in the medium or long term, there are risks of a violent succession if the president leaves power.

What should be done? With support from outside partners, Chadian authorities should work to build a more representative, professional army, responding to the discontent within it and allowing for debate about its future. Finally, Chad’s allies should help reinforce safeguards to discourage violence in the event of a power vacuum.

Chad’s army plays a central role in the international counter-terrorism operations in the Sahel, but it is a source of potential instability at home. Its cohesion is undermined by discrepancies in the treatment of elite troops compared to other soldiers, and by the lack of regional and ethnic diversity in command positions. Moreover, in recent years, new forms of dissent have arisen. Some officers have refused to fight their rebel “kin”, while others, admittedly few in number, have publicly criticised the management of military affairs. Many Chadians worry about the risks of a violent succession and strife within a divided army if 68-year-old President Idriss Déby were to leave power. In the months and years to come, and with the help of outside partners, the Chadian authorities should respond to discontent within the army, improve representation of different national communities within its ranks and, above all, identify safeguards to avoid a violent transition.

Long considered an impoverished country with no real regional clout and in the grip of rebellion, over the past decade Chad has gained new standing on the African scene. It owes this renewed influence above all to the deployment of its army abroad to combat jihadists in the Sahel and Lake Chad basin. Having become a key actor in the counter-terrorism fight, the Chadian government has played the military diplomacy card and consolidated its political alliances and security partnerships with Western countries, in particular France and the United States.

But while Chad’s army has displayed its strength abroad, it is by no means a factor of national unity on its home turf. When President Déby came to power in 1990, he expressed a desire to create a national, professional army. This has never materialised. Over the past 30 years, the authorities have carried out several reforms, but none has allowed for a real restructuring of the security and defence forces, which remain organised along ethnic lines. In addition, a lack of meritocracy and disparities in the treatment of troops undermine the army’s cohesion. While elite troops (mainly led by members of the president’s clan) are better trained, equipped and paid, the authorities leave other soldiers considerably worse off. This situation leaves many soldiers with strong feelings of injustice and frustration.

Relations between the population and the defence forces are ambivalent. In areas where insecurity is high, such as in Lake Chad province, the army is sometimes seen as providing security. Yet in other regions, like the south, it is often considered intrusive. In recent years, parts of the population have grown to distrust the military. Frequent cases of abuse and corruption have harmed the army’s image, and the impunity of some soldiers perceived as being close to power is less and less tolerated, especially by young people.

The issue is especially pressing today because the army is under particular strain, due both to internal issues and the challenges it faces. While Chadians agree on the need to fight terrorism, the country is also in the grip of “fraternal” conflicts, in which rebels and soldiers are sometimes related by blood. Thus, in February 2019, during the incursion of the rebel Union of Resistance Forces from Libya into Chad, some high-ranking Chadian officers refused to fight their kin within the rebellion. In the same year, and for similar reasons, some soldiers were reluctant to combat self-defence groups in the northern gold-mining area of Miski. It is clear that military loyalties fluctuate and largely depend on circumstances.

The army’s current state and deeper structure pose a risk to the country’s stability. In the short term, the presidential election scheduled for April 2021 will likely take place in a tense social climate and may test security forces. In the medium term – notably since Déby’s health is the subject of recurring speculation – many Chadians and diplomats are especially worried about the risks of a violent succession crisis once the president leaves office. Many of the challenges and power imbalances that divide Chadian society are also found within the army. If Déby’s reign came to an abrupt end, the army could break apart, and struggles among rival factions, especially along communal lines, could erupt with unforeseeable and even dangerous consequences for the country’s stability.

President Déby is unlikely to initiate a major transformation of the army, as it could weaken his support base and give more influence to communities perceived as hostile to his leadership, thus threatening his rule. Yet Déby and some in government, much like civil society, some political parties and Chad’s partners, are aware that the army carries the seeds of a future crisis, and that it must evolve. While large-scale reform is highly unlikely in the short term, limited progress could be made through several initiatives:

The authorities should make the army more representative of the population and strengthen its internal cohesion. They should make recruitment more diverse and transparent, ending sudden and unjustified promotions, and allowing for more formal and linear career development. In addition, Chad’s authorities and international partners should ensure that investments, especially in training, are not focused solely on elite troops.

To restore the image of the army and security forces and reduce popular distrust of the institution, authorities should quickly sanction abuses by soldiers. Moreover, to avoid conflicts of interest in rural zones, the authorities should not deploy high-ranking army officers to areas where they own large livestock herds. This measure would avoid the risk of these officers taking sides in disputes between farmers and herders.

The Chadian authorities should include the subject of the army on the agenda of the next inclusive national forum scheduled for 2022. The country’s political parties and other major stakeholders could discuss the state of the defence forces and attempt to build consensus around necessary medium-term changes to the military. In the meantime, civil society organisations could work on these issues by creating spaces for dialogue and formulating constructive recommendations. Political parties could also use the run-up to the April 2021 election to present their medium- and long-term visions for the Chadian army.

Civil society organisations responsible for monitoring human rights violations should try to deter armed actors from resorting to violence in the event of a power vacuum, even if the current context precludes significant ambition. They could do so by documenting human rights abuses on the part of soldiers and other Chadian combatants. Chad’s donors and partners should do their utmost to ensure that these organisations can operate in a secure environment and without facing threats. Civil society should also build closer relationships with traditional and religious authorities who, in the event of a conflict, could play a stabilising role and urge young people not to take up arms.

B. Vers une armée plus représentative et plus professionnelle 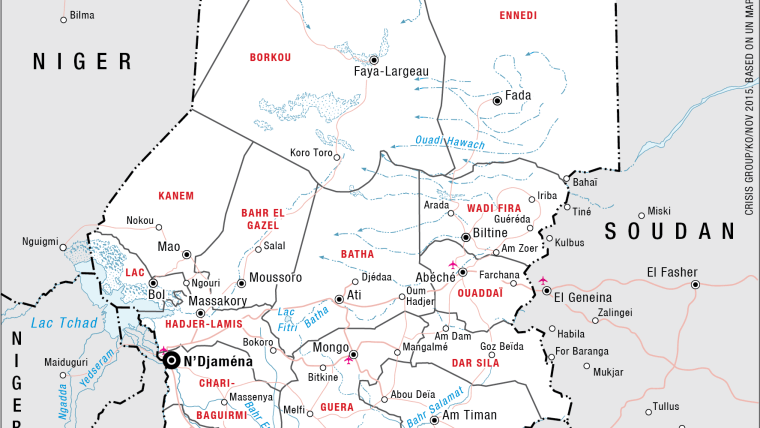 This week on Hold Your Fire!, Richard Atwood speaks with Enrica Picco, Crisis Group’s Central Africa director, about the security forces’ crackdown on protesters in Chad last week, prospects for a return to civilian rule and whether more violence is likely.

On 20 October, Chadian security forces killed more than 50 protesters on the streets of Chad’s capital N’Djamena and other cities and towns. Demonstrators had taken to the streets in anger at an extension of the country’s transitional period that allows President Mahamat Déby to hold power for another two years and then possibly contest elections, despite his previous pledges to stand down. Mahamat Déby assumed power at the head of a transitional military council after his father, Idriss Déby, who had ruled Chad for 30 years, died when Chadian forces were fighting rebels in the country’s north. Initially, Mahamat Déby seemed to mark a break from the past: space for political debate opened up, some exiled opposition leaders returned to Chad, and talks with rebels got under way. Over the past few months, though, the most powerful rebel groups have rejected the deal that emerged from those talks and, when a national dialogue started in N’Djamena, the main opposition party and civil society organisations chose not to participate. Then came the announcement that junta members, including Déby, could run for elections, which triggered protests and the crackdown.

In this episode of Hold Your Fire!, Richard Atwood speaks with Enrica Picco, Crisis Group’s Central Africa director, about where Chad’s transition is headed. They look at the violence against protesters and what options remain for the country’s political opposition. They also talk about the various Chadian rebel groups, many based in Libya and some of whose leaders are part of Deby’s family, that arguably pose a graver threat to Deby’s rule than his civilian opponents. They discuss Mahamat Déby’s ascendancy to power after the death of his father, the influence of Chad’s powerful military in backing him and how Déby has shaped politics in the country thus far. They also look at how regional actors, including the African Union, and other foreign powers, notably France, which traditionally enjoys close ties to the Chadian government, have responded to the violence. They discuss what people should be watching in the months ahead.

For more on the situation in Chad, check out Crisis Group’s extensive analysis on our Chad country page.