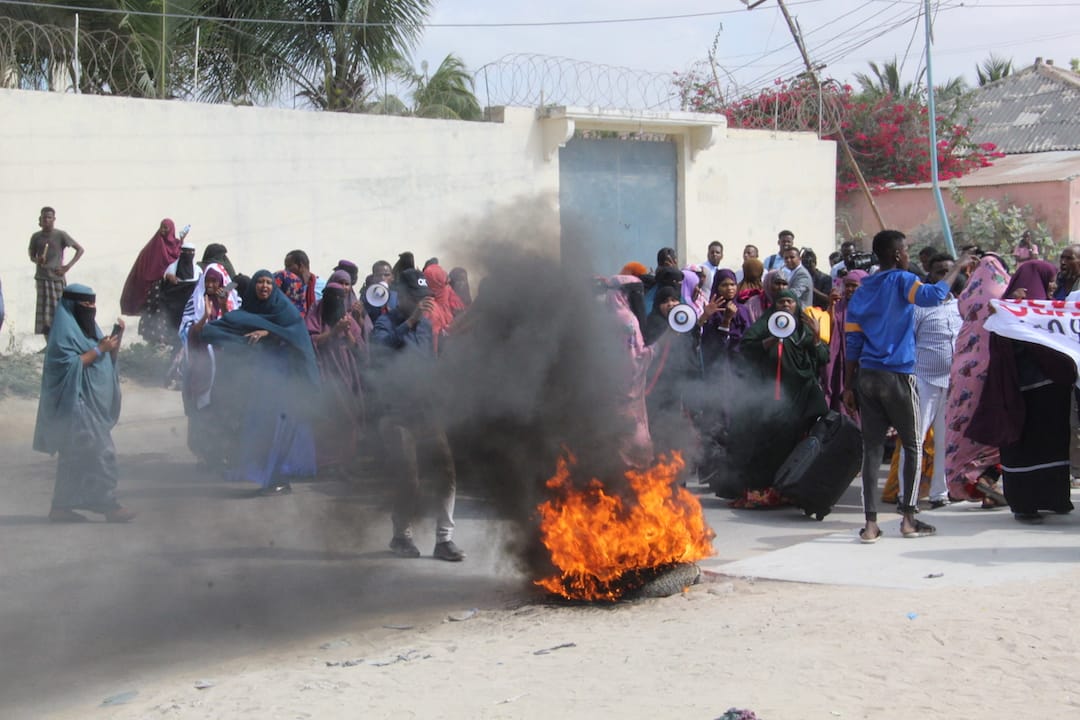 Women take part in a demonstration against the Somali President Mohamed Abdulahi Farmajo in Mogadishu on December 15, 2020 accused of interferences in the electoral process. STRINGER / AFP
Statement / Africa 16 April 2021

Tensions are running high following the Somali parliament’s decision to extend the incumbent president’s mandate by two years. External partners should urgently convene – and mediate – talks among the country’s bitterly divided elites, to prevent its worst political crisis in years from escalating.

Somalia’s long-running political crisis has entered a new, dangerous phase. In a hastily convened session on 12 April, members of parliament overwhelmingly endorsed a bill that would delay elections by two years, in effect extending the term in office of President Mohamed Abdullahi “Farmajo”. The move is an alarming escalation of a dispute that could well spiral into widespread violence unless Somalia’s political elites return to the negotiating table. The opposition is said to be considering forming a parallel government; cracks have deepened in a security apparatus long divided along clan lines; and the president’s opponents have vowed to resist extension of his rule. But even though the hour is late, it is not too late for the parties to reverse course. Somalia’s external partners, led by the African Union (AU) and backed by the U.S., the UN Security Council and the European Union, should step in to organise – and lead – fresh talks among all stakeholders to craft a roadmap to timely elections. All external actors should unambiguously signal readiness to impose sanctions on parties who obstruct a new initiative to find a consensual path forward.

The distrust that has prevented Somalia’s politicians from preparing elections has been on full display over the last few months. President Farmajo and leaders of Somalia’s subnational units, known as federal member states, agreed on a framework for indirect elections on 17 September 2020. But despite several rounds of subsequent talks, they have repeatedly failed to work out the voting system. Following the expiry of Farmajo’s four-year term on 8 February, the opposition demanded that he hand power to an interim government headed by the prime minister. An attempt by Farmajo’s rivals to hold demonstrations to press home this point was met with lethal force, with clashes between police and demonstrators leaving at least eight people dead. Somalia’s external partners then urged talks to resolve the deadlock. But the parties argued bitterly over the venue, the agenda and the security arrangements. When they finally convened on 3 April at Mogadishu’s international airport, which is guarded by AU troops, negotiations collapsed after four days.

In response, Farmajo and his supporters decided to raise the stakes by summoning parliament to initiate the term extension his opponents had consistently accused him of planning. During a special session convened by lower house Speaker Mohamed Abdirahman Mursal, MPs argued that the failure to reach a compromise made the 17 September agreement impossible to fulfil. They subsequently mandated the National Independent Electoral Commission to hold elections by universal suffrage in two years. The president signed the bill into law two days later.

The parliamentary decision has sent political tensions soaring to levels not seen in Somalia for years – and which could snowball into violence due to two key factors. First, the de facto term extension has shattered already low levels of trust among Somalia’s rival political actors. Farmajo’s opponents have rallied under the banner of the Council of Presidential Candidates, an alliance that includes two former presidents and a former prime minister. They represent important clan constituencies, including in Mogadishu, and have vehemently denounced the extension of Farmajo’s mandate, pledging unspecified action. These opposition candidates are allied with the presidents of the Puntland and Jubaland federal member states. Farmajo, for his part, enjoys the support of leaders from the federal regions of Galmudug, Hirshabelle and South West. With lines of communication cut between duelling parties and with the opposition said to be considering formation of a parallel government, the risk is high that parties will use force to secure political concessions.

The crisis has sorely tested the cohesion of Somalia’s fragile army and police.

Secondly, the crisis has sorely tested the cohesion of Somalia’s fragile army and police. Hours before parliament convened to vote on the term extension, Mogadishu police chief Sadiq “John” Omar condemned what he described as a power grab and ordered his men to block the entrance to the building, arguing that parliament’s term had expired. Police Commissioner General Hassan Hijar Abdi immediately dismissed Omar and sent forces to secure the venue. Well-placed security sources told Crisis Group that a number of soldiers from Somalia’s elite Turkish-trained Gorgor army units have since abandoned base and retreated to their clan strongholds. Elders from these clans also told Crisis Group that any attempt by authorities to disarm their troops will trigger full-scale fighting. The longer the crisis lasts, the greater the danger that these rifts will grow, raising the spectre of a return to civil war.

Resolving the crisis will not be easy. Farmajo has dug in, warning outside actors to stay out of Somalia’s internal affairs. The timing of the parliamentary decision – two days before the Muslim holy month of Ramadan began – was likely designed to limit the opposition’s capacity to hold demonstrations at a time when most Somalis are observing the fast. Publicly, the opposition has reacted with restraint. Privately, however, it is working to ensure that Farmajo does not get his way. If opposition politicians go ahead to form a parallel government, they will add fuel to the fire and send tensions soaring higher.

As Crisis Group has consistently advocated, there is no alternative to concerted third-party mediation to break the electoral impasse, given the distrust among Somalia’s actors. In the past, the reluctance of external partners to engage directly was understandable, not least due to Mogadishu’s insistence that it could broker a compromise through Somali-led talks. That claim no longer holds. Instead, the spiralling crisis threatens to undo all the progress made in establishing a degree of political stability in Somalia over the last two decades. Moreover, the political stalemate and the wrangling among security forces have offered an opening to Al-Shabaab militants. Emboldened by the partial withdrawals of Ethiopian and U.S. troops at the end of 2020, militants have already stepped up attacks and resumed the large-scale assaults on Somali and foreign military targets that outside forces had prevented them from staging for several years. The crisis has also offered a propaganda coup for the militants, who have boasted that it vindicates their depiction of elites as power-obsessed incompetents.

Somalia’s key external partners need to do more. They have shown admirable unity in rejecting the term extension, with the U.S., UN, AU, EU, UK and regional bloc IGAD all issuing strong statements to express opposition. Now they should urge all Somali actors to resume talks. Ideally the AU, through the office of Commissioner for Political Affairs, Peace and Security Bankole Adeoye, who has already shown interest in resolving the standoff, would mobilise external partners to step up their diplomacy. First, the AU, with the backing of key external partners, should appoint an envoy who, working in concert with the UN envoy, should meet the main parties separately and urge a return to talks. In particular, these emissaries should emphasise to Farmajo that he will need to accept external mediation, given that the opposition will not agree to talks under his supervision. To improve the chances of Farmajo shifting his position, the U.S. could engage directly with his key backers in Qatar and Turkey and urge them to prevail on the president to show greater flexibility, given the risk the crisis poses to Somalia’s stability.

External actors should make clear that they are prepared to impose targeted sanctions.

Next, external actors will need to coordinate with Somalia’s political elite in calling for an inclusive summit to discuss a pathway to elections. Convened by the AU, with the U.S., EU and UN acting as guarantors, such a meeting should focus on delivering a timeframe for elections within weeks, rather than months. Talks could build on the 17 September agreement, but would not necessarily be bound by it, as only a narrow section of the political elite – Farmajo and the presidents of federal member states – crafted the document. Realistically, however, any election would need to broadly follow the contours of the 17 September agreement, given that an indirect election is the only feasible way to hold a vote in today’s security environment, in which Al-Shabaab controls swathes of territory in the south-central Somali countryside. Ideally, new talks would involve more participants, particularly representatives of the Council of Presidential Candidates and civil society.

To ensure that parties stick to their commitments, external actors should make clear that they are prepared to impose targeted sanctions. The U.S. has signalled a willingness to take action and urged key actors to change course in response to the latest developments. The EU has also promised to take “concrete measures” if authorities do not reverse the term extension. These are positive early steps. Somalia’s elites crave the legitimacy that comes with international recognition. Many use foreign passports to travel, hold assets outside Somalia, and keep their families in the U.S. or EU countries. Credible threats to impose visa bans and asset freezes might well concentrate minds.

Despite its many domestic challenges, Somalia has managed to establish a degree of political stability in the past decade and a half. Most strikingly, political elites have fashioned consensus on election management in past electoral cycles and found a way to both hold regular votes and oversee peaceful transitions of power. The current impasse – which could easily tip into major violence – threatens to unravel those gains. Somalia’s elites must return to dialogue.