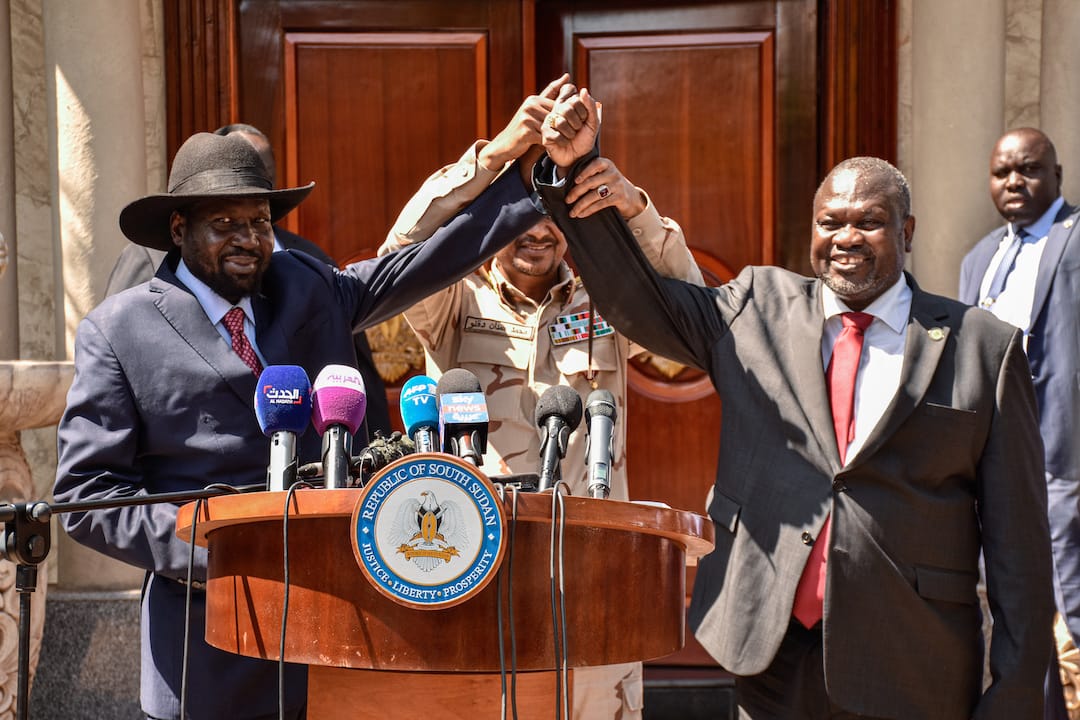 After months of delays and deadlock, bitter rivals Salva Kiir and Riek Machar finally clinched an agreement to form a unity government in South Sudan. Regional leaders must now maintain pressure on both men and other conflict parties to keep the fragile deal on track.

On 22 February, Riek Machar and other opposition leaders were sworn in as vice presidents in a new South Sudan unity government. This step came as part of a deal aimed at ending six years of conflict. President Salva Kiir declared the war officially over and asked for forgiveness from his long-time archrival, Machar, who in turn pledged to work in partnership with Kiir. The unity government’s formation, delayed twice over the last nine months amid political deadlock, is a major advance that gives the country’s leaders a chance to build upon a ceasefire between Kiir’s forces and Machar’s that has largely held for over a year. While the news is encouraging, South Sudan is hardly out of the woods. Kiir and Machar – whose past attempts to share power have foundered – will now need to work in concert to unify the national army, resolve disputes over control of key cities and make peace with holdout rebel groups. Continued pressure from regional leaders who played a key role in pushing the two leaders to strike a bargain will almost certainly be critical to the new arrangement’s success.

The deal came not a moment too soon. The fragile ceasefire dating back to the September 2018 accord that lays out a peace framework might well have started to unwind had the parties not reached a deal by the 22 February deadline they set for themselves. A return to fighting would have been devastating for a population that is exhausted by war and a country that lies shattered. Even a year after the two main belligerents stopped fighting, major towns are in ruins, emptied of most of their inhabitants. Ghost neighbourhoods stretch on and on in settlements across the country, the homes stripped of roofs and walls caved in. Up to 400,000 may have died in the conflict that started in December 2013, a staggering number in any country, but especially in one of only twelve million. Millions more were displaced. Bringing the South Sudanese people together will require the work of generations, but the first task is to preserve the new government’s unity.

Kiir and Machar have for years been, and may always remain, bitter political rivals.

That will be no small task. Kiir and Machar have for years been, and may always remain, bitter political rivals. Each is under pressure from hardliners in his camp to extract as much benefit as he can from the new government. The resulting wrangling could throw their respective forces back into conflict. Yet there are also reasons to believe that progress is possible. Both have shown more commitment to the peace process than in the past. That the ceasefire held as long as it did is encouraging, as are the compromises the two rivals reached to enable the 22 February swearing-in ceremony.

One major sticking point that required compromise concerned the number and demarcation of states within South Sudan, which has major consequences for the distribution of power across the country. During the war, largely in an attempt to appease demands from within his Dinka ethnic group, the country’s largest, Kiir had redrawn the boundaries to create first 28 and then 32 states. In order to reach a deal, he agreed to revert largely to the country’s pre-war internal boundaries, demarcating ten states and creating three “administrative areas”, one of them new. Kiir’s change of mind required him to fire 32 governors and reverse some of his most hotly contested gerrymandering.

To be sure, Kiir made this concession only under high-level pressure from the Intergovernmental Authority on Development (IGAD), the regional bloc mediating the peace deal, and, the man who by some accounts is his strongest ally, President Yoweri Museveni of neighbouring Uganda. But that does not diminish the magnitude of the concession or its significance to the peace process. It succeeded in breaking the deadlock, giving Machar the political space to return to the capital Juba without losing grip of his factious coalition, some of whose members had threatened to keep fighting if Kiir’s wartime state boundaries stayed unchanged.

A second hurdle was finding a responsible answer to the sticky question of Machar’s personal security in Juba. Crisis Group had previously warned that Machar should not bring his own forces into the capital, as he did in 2016, when the two men last tried to form a unity government under the terms of an earlier peace agreement. On that occasion, his forces clashed with Kiir’s amid political disagreements, scuttling the peace deal and reigniting the war. In the present context, Machar asked Kiir to allow UN peacekeepers to provide security in Juba. Kiir refused, but regional and international pressure on Machar to compromise following Kiir’s concession on state demarcation was successful. Machar returned to Juba without his own security force, relying on Kiir’s personal guarantee for his safety, at least for the time being. It was a bold move for Machar given that twice, in 2013 and again in 2016, Kiir’s forces have chased him out of the capital.

With those two contentious issues out of the way, the parties were able to close the deal by 22 February even though they left other major sticking points – including how to speed up the lagging unification of troops loyal to Kiir or to Machar in a single army – to be addressed as the new government moves into action to cement the peace. Although the two leaders will no doubt be focused for days, weeks or even longer on horse trading over who should occupy government positions and influential governorships under the peace deal’s power-sharing formula, they cannot afford to put aside these substantive matters for long.

Managing the many armed groups across the country is a particularly pressing concern.

Managing the many armed groups across the country is a particularly pressing concern. The promised army reform is a huge challenge, the first phase alone meant to bring together 83,000 troops. While the process of melding the erstwhile antagonists into a single force will likely last for years, fighters will be watching closely in the short term for signs of progress. Thousands of Machar’s troops have already amassed at designated training sites near Juba and elsewhere in anticipation of unification, but they are also a reminder of how quickly peace could unravel if Kiir and Machar do not keep their competition in check. Also sobering is that rival rebel commanders have refused to assemble together and that both sides have embarked on new recruitment drives to inflate their respective ranks. In order to create needed momentum for unification, the forces already at joint training sites should proceed to graduation and unified deployment so that sceptics, particularly in the opposition forces, do not lose faith in the process.

The unity government will also need to work with the new governors being installed to address long-simmering conflicts that predate this civil war, particularly over control and inclusive governance of two major cities, Wau and Malakal. The government will also need to reach peace deals with insurgencies that did not sign the 2018 agreement, particularly Equatorian rebels led by Thomas Cirillo, and maintain the ceasefire reached with Cirillo and other holdout parties in January. Encouragingly, the government has committed to proceeding with political negotiations with these groups in the Rome peace track, mediated by the Sant’Egidio community.

The regional powers that pushed Kiir and Machar to make the compromises enabling the 22 February deal likewise cannot rest. History has shown that only pressure from South Sudan’s neighbours can compel its two top leaders to make major concessions. Certainly, that was the case in the run-up to 22 February. Two weeks earlier, IGAD met in Addis Ababa on the sidelines of the African Union (AU) summit, as the two warring leaders remained locked in their positions. Museveni, along with Sudanese Prime Minister Abdalla Hamdok, reportedly pushed Kiir to return to the pre-war state demarcation of ten states. South African President Cyril Ramaphosa, who chairs the AU’s C5 countries mandated to support the South Sudanese peace process, also conducted his own shuttle diplomacy in Addis Ababa following the months of mediation efforts by his deputy, David Mabuza, on the dispute over states. The Kenyan special envoy, Kalonzo Musyoka, reinforced these efforts. It worked. Now, their collective attention and effort will be needed to help the unity government get on its feet and prevent any future fallout between Kiir and Machar from derailing South Sudan’s journey back from war.

Donors also have a role to play. Top donor countries, including the Troika of the U.S., UK and Norway, as well as the EU and others, applied important diplomatic pressure in the run-up to last week’s compromises. Escalating U.S. sanctions on Kiir’s government and threats to levy more on both sides added to the pressure. Continued unity of purpose among donors, in both the carrots they offer and the sticks they wield, will be key to pushing Kiir and Machar to keep their commitments to peace.

Church leaders, global and local, should lobby South Sudanese and regional leaders publicly and privately to keep the peace accord on track.

Meanwhile, church leaders, global and local, should lobby South Sudanese and regional leaders publicly and privately to keep the peace accord on track, as they did before the unity government was formed. Vatican City could have a particularly important part to play. Kiir continues to refer to his April 2019 visit to the Vatican, where in a striking gesture, Pope Francis knelt on the ground and kissed his and his rival’s feet. The president now hopes for a papal visit to South Sudan to commemorate the country’s move toward peace.

Many South Sudanese reasonably doubt that Kiir and Machar can ever work together. With elections looming in three years, and Machar planning to challenge Kiir for the presidency, the relationship will remain fraught. Still, there are grounds for some cautious optimism. Fatigued by the long war, many South Sudanese fervently wish to put the years of bloody conflict behind them once and for all. The parties have thus far avoided repeating some of the mistakes of the past – such as dividing Juba between duelling security forces. Moreover, although it took substantial external pressure to arrive at this point, the magnitude of the compromises they have made suggest that both Kiir and Machar are more willing participants in this unity government than in the last failed one. The two long-time belligerents will now have to make a habit of the kinds of concessions that made last weekend’s deal possible, striking the bargains that are necessary to keep the fragile unification process on track and to allow their young country to end the brutal war that has already gone on far too long.