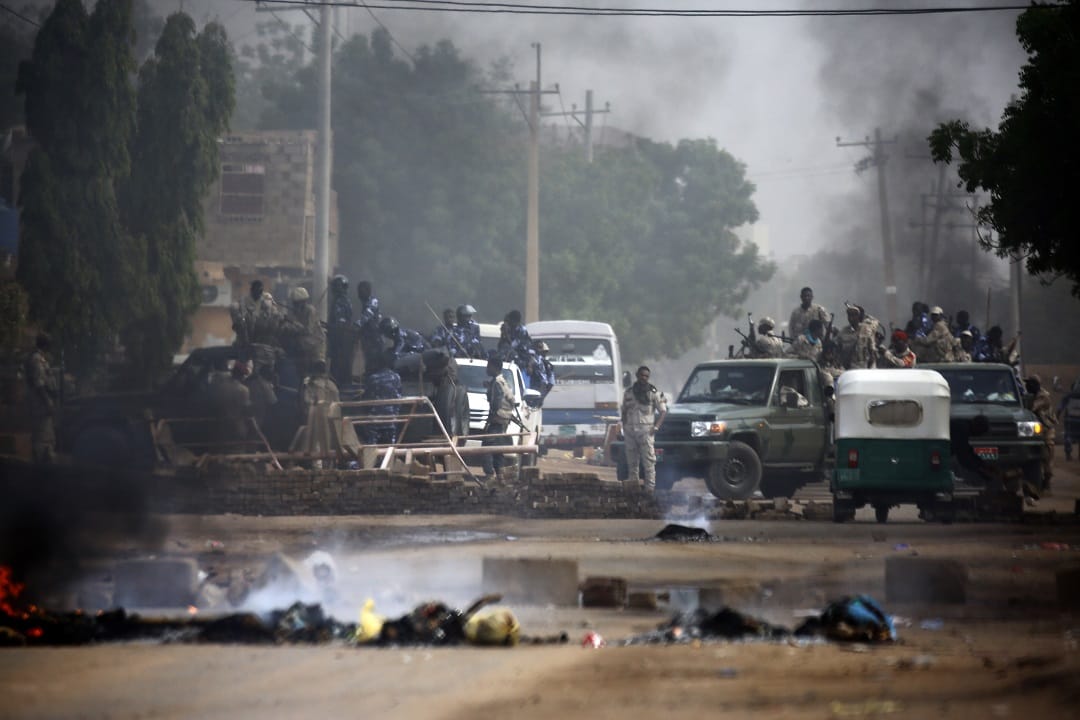 Sudan’s political transition is in great peril following the unprovoked killing of dozens of protesters. The African Union has rightly suspended the country’s membership. Western and Gulf powers should take urgent steps to compel Sudan’s interim leaders to accept a civilian-led transitional administration.

On 3 June, Sudan’s security forces launched a bloody crackdown on unarmed protesters in Khartoum, clearing a sit-in outside the country’s military headquarters and bringing its political transition to a screeching halt. The horrific rampage left dozens dead and many more injured. State-affiliated militias now roam the streets of the capital and other major cities, with residents sheltering at home. Many Sudanese fear the prospect of fractures among the army, intelligence services and Rapid Support Forces (RSF), the paramilitaries blamed for the attacks. The risk of widespread conflict is at its highest since the military removed Omar al-Bashir on 11 April. But the alarming course of events is reversible. On 6 June, the African Union’s Peace and Security Council took an important first step in the right direction, suspending Sudan’s African Union (AU) membership until authorities put a civilian administration in place. Other world leaders, including Sudan’s backers in the Arab world, must now follow suit, quickly and in concert, to force the military junta to resume talks aimed at handing power to a civilian-led transitional authority.

The ouster of Bashir was set in motion by a remarkable, non-violent campaign, which began in the provinces in mid-December and quickly spread countrywide, eventually forcing the toppling of one of Africa’s longest-ruling leaders. Since 11 April talks have been marked by periods of apparent progress, only to be followed by stalemate. On one side is the Transitional Military Council – an awkward marriage of the Sudan Armed Forces, now led by General Abdel Fattah al-Burhan, and the RSF, a rural militia primarily from Darfur led by General Muhammad Hamdan Dagalo, known as Hemedti, who many consider the true power behind the scenes. (The RSF rose to prominence as a counter-insurgency force during the civil war in Darfur.) On the other side is the opposition – the Forces of the Declaration for Freedom and Change, comprising traditional parties and active rebel movements as well as a coalition of professional trade unions known as the Sudanese Professionals Association.

There had been hopeful signs: the two sides agreed on the outlines of a deal built around a civilian-led executive overseen by a sovereign council for a three-year transitional period leading up to elections. The sovereign council’s composition and chairmanship remained in dispute, but the parties reportedly came close to a compromise under which they would have had an equal number of seats, with the chair rotating between the two sides, and with the civilian-dominated council of ministers and legislative council wielding more power in any case.

What happened next is not entirely clear. According to various reports, parts of the military council were unhappy with the tentative deal, fearing it ceded too much power. The RSF and other disgruntled elements scrapped the deal and moved to disperse the protesters. On 4 June, Burhan announced plans to form a government and hold elections in nine months.  That the crackdown came immediately on the heels of the junta leaders’ first state visits from 23 May, including to Egypt, Saudi Arabia and the United Arab Emirates (UAE), fuelled protesters’ suspicions that external actors encouraged the Sudanese officers down the path of violence instead of compromise.

All concerned with peace and stability in Sudan should take every possible step to stop this prospect in its tracks and press for a genuine transition to a civilian-led transitional administration.

The attacks on the protesters have muddied the road ahead. The RSF now patrols the streets of Khartoum as residents hole up at home, fearing to go out and without internet access, which the state has cut off. The crackdown could in principle bring together the factious opposition against the military council, which had been quietly trying to peel off some of the established opposition parties. Protesters say they will continue their campaign of civil disobedience rather than negotiate to share power with the military rulers responsible for the mass killings. They have demanded that the junta step down.

The junta’s most powerful constituency lies, by all appearances, outside Sudan – in Cairo, Riyadh and Abu Dhabi. The Saudis and Emiratis know Burhan and Hemedti well due to their command of Sudanese forces in the Yemen war. They trust the generals to shepherd the country through a managed transition from one military-led regime to another, avoiding the interlude that occurred in Egypt – elections with uncertain outcomes followed by brief Muslim Brotherhood rule – by sidelining those favouring more wholesale reform among civilian protesters. This gambit is risky, however: it could lead to greater unrest, or perhaps even civil war, precisely the outcomes Arab allies say they dread. The recent two-day general strike has made clear that popular protest can continue to render the country ungovernable. Sudan’s economic troubles are already severe, and both Saudi Arabia and the UAE would be on the hook for open-ended subsidies to keep the ship of state afloat.

The gambit also appears based on a faulty analogy. An Egyptian-style managed transition in Sudan lacks a critical ingredient: a cohesive military. Bashir gutted the Sudan Armed Forces, gradually outsourcing security tasks to a dysfunctional array of state-backed militias and paramilitaries, in order to forestall a coordinated challenge to his rule. In recent years he bolstered the RSF in particular to counterbalance other elements of the security apparatus. The RSF also gained influence as it contributed to the Saudi-led war in Yemen. Indeed, Bashir so divided his security forces that, in the end, he could only be ousted through a coup-by-committee. Today, many of Sudan’s officer corps would sooner trust their fate to Khartoum’s opposition elite than to Hemedti, whom they view as a thuggish provincial warlord and who lacks the legitimacy and political constituency to rule on his own. In short, this bloated and fissiparous security apparatus offers no clear foundation for a political regime.

A key to a peaceful settlement thus lies in prompting the junta’s Arab backers to rapidly shift tack. There are signs that they and their Gulf backers have softened their position in the face of widespread condemnation and revulsion at the attack on unarmed protesters. On 5 June, Saudi Arabia publicly expressed “great concern” over the loss of life in Sudan, calling for a resumption of dialogue. As if in response, Burhan quickly changed his tune, calling on 5 June for the opposition to return to talks. A day earlier, the U.S. State Department released an unusually blunt readout from a call between Under Secretary of State for Political Affairs David Hale and Saudi Deputy Defence Minister Khalid bin Salman in which the Americans pressed for a transition to a civilian-led government “in accordance with the will of the Sudanese people”. This call may be directly related to the softening of Riyadh’s stance – and Khartoum’s.

As early as 2012, Crisis Group had warned that the security forces might fly apart in a post-Bashir Sudan. The danger of such a split – and the conflict it portends – is real and growing. All concerned with peace and stability in Sudan should take every possible step to stop this prospect in its tracks and press for a genuine transition to a civilian-led transitional administration.