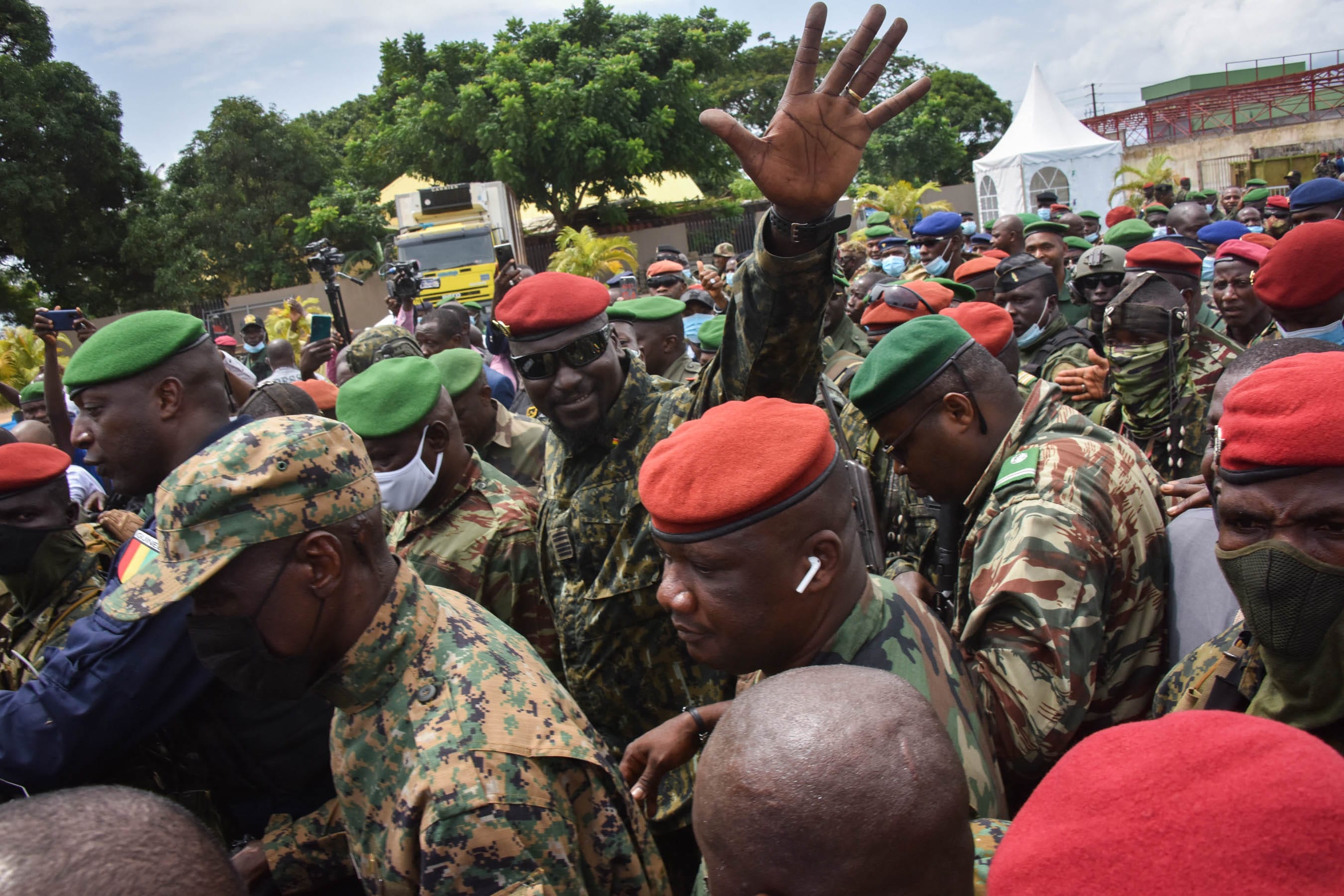 Lieutenant Colonel Mamady Doumbouya, head of the Army’s special forces and coup leader, waves to the crowd as he arrives at the Palace of the People in Conakry on 6 September 2021. CELLOU BINANI / AFP
Q&A / Africa 09 September 2021

President Alpha Condé’s unwillingness to give up power set the stage for a military takeover on 5 September. In this Q&A, Crisis Group experts Vincent Foucher and Rinaldo Depagne show how this latest coup d’état is part of a worrying trend in West Africa.

Guinea’s special forces arrested President Alpha Condé on 5 September after skirmishes in a government district in the capital, Conakry. Colonel Mamady Doumbouya announced the government’s dissolution and the suspension of the country’s constitution. What are the latest developments?

Calm has returned to Conakry for the moment, and violence has not broken out in the rest of the country. According to available reports, fighting in the capital has claimed the lives of around ten people, mainly soldiers from the presidential security guard. At the time of writing, President Alpha Condé remains in the custody of the coup’s organisers. Spontaneous street celebrations (sometimes attracting hundreds) broke out in the hours after Condé’s removal, particularly but not exclusively in the strongholds of the main opposition party, the Union of Democratic Forces of Guinea (UFDG), in Conakry’s suburbs and Labé. The absence of reported protests against the coup indicates that few regret the president’s ouster. In 2020, Condé won a third term after a contentious constitutional amendment and electoral process that sparked protests in which dozens of his opponents lost their lives.

In his statement on behalf of the National Rally and Development Committee (CNRD), the executive structure established following the coup, Colonel Mamady Doumbouya ticked all the boxes by calling for national unity, an end to corruption, reconciliation, good governance and respect for the rule of law. He also announced a series of initial measures to strengthen his grip on power and to reassure the international community and the Guinean population. On the day after the coup, local military commanders replaced regional governors. Government ministries’ general secretaries substituted themselves for ministers, who also had to surrender their passports and official cars on CNRD orders. Political adversaries detained for protesting Condé’s third term in office are starting to be released. After temporary closure, air borders reopened on 5 September, and the new authorities have dismantled some of the notoriously intimidating checkpoints that had been set up in Conakry after the electoral crisis. Doumbouya has also stated that mining permits – Guinea is heavily dependent on revenues from mineral extraction – are not at risk.

Why did the coup happen?

The putsch was sparked by frictions within the country’s military apparatus over recent months and President Condé’s loss of legitimacy, a bad situation made worse by his disputed re-election for a third term in office. Competing clientelist interests are rife within the murky security forces; certain groups are even implicated in illicit business, in particular drug trafficking. Under Doumbouya’s command, the special forces – set up “to combat terrorism” in 2018 – had become staunch defenders of Condé’s regime. They subdued a mutiny in October 2020 in Kindia, and some sources suggest that they also played a part in putting down demonstrations against Condé’s third term. But the special forces’ rapid increase in power troubled senior government officials. On 1 June 2021, President Condé issued a decree to create a new security unit called the Rapid Intervention Battalion as a counterweight; rumours circulated that Doumbouya had even been arrested. Doumbouya may therefore have led the coup pre-emptively, taking advantage of Condé’s eroded legitimacy to protect himself.

Aside from individual motivations, this putsch stemmed from the weakening of Alpha Condé’s regime. Its popular support and legitimacy crumbled after the October 2020 re-election. In his attempt to cling to power at all costs, Condé in effect cleared the way for the army to regain control of the country. After serving two terms – the maximum period allowed by the country’s constitution – the president decided to amend the constitution. This action triggered a backlash from many Guineans; broad sectors of society as well as members of the international community questioned the validity of his electoral victory. He responded with extreme repression: following the presidential election, the authorities arrested and imprisoned more than 400 people, several of whom died in custody. Guinea’s social and economic situation remains dire, and the COVID-19 pandemic has further increased inequality. Fuel prices rose by 20 per cent in early August, causing a sharp rise in the costs of foodstuffs while high-ranking members of the political regime lead extravagant lifestyles after signing lucrative mining contracts with foreign companies. The extreme fragility of Condé’s regime is readily apparent in the ease of his overthrow and the population’s complete acquiescence following the plotters’ show of force.

What explains the spate of coups in Francophone Africa?

This coup d’état is the third in Francophone Africa in 2021, following Assimi Goïta’s putsch in Mali and the anti-constitutional succession in Chad by the late Idriss Déby’s son. A third coup attempt, in Niger, was thwarted last March, one day before the president-elect, Mohamed Bazoum, took office. Certainly, successful coups have given encouragement to potential plotters in neighbouring countries.

Theoretically, coups in this region belong to the past: nominally competitive elections now take place on a more regular basis in West Africa, regional and continental institutions running according to democratic principles are stronger, and a policy of “zero tolerance” applies to anti-constitutional changes in government. In practice, however, elected heads of state often seek to retain their grip on power by overriding electoral and constitutional limitations. Putsches have again become viable after the failure of official democratic means to guarantee political alternation or to reinforce governments’ legitimacy.

The turbulence affecting institutions in West Africa is reminiscent of the 1970s and 1980s, when subaltern military officers challenged ageing and corrupt authorities. In his televised speech on 5 September, Doumbouya even referred to Ghana’s Jerry Rawlings, who came to power through a coup in that period and remained in power for the following twenty years.

In Mali and Guinea, international and regional actors seem to be left little choice but to bear such use of force against presidents who have overstayed their welcome and lost credibility, and whose barely democratic methods and style of government are difficult to sustain or reestablish.

Before the coup, Alpha Condé was isolated diplomatically, cut off from neighbouring West African countries, notably Senegal and Nigeria, both very influential within the Economic Community of West African States (ECOWAS). After remaining actively engaged with the Guinean authorities during Condé’s first two terms, Western international partners – particularly the European Union, France and the United States – were also growing weary of the ousted president’s political intransigence and bad faith. The international and regional response to recent events has been simply to condemn the coup on principle. Despite Condé’s close relationships with Turkey, China and Russia, it is unlikely that these countries will step in to rescue his regime. Therefore, for want of anything better, this coup will lead to a transition.

What risks does this coup pose for Guinea’s future?

As shown by Guinea’s history, military regimes (even during transitional periods) often generate a climate of uncertainty and lawlessness. Periodic outbreaks of violence have affected the country in the past, especially after the 2009-2010 military transition when some soldiers gave themselves carte blanche to engage in racketeering and abuses of the civilian population. The country’s security forces have a deeply entrenched culture of impunity and violence, and Colonel Doumbouya must now go beyond merely proclaiming his good intentions.

A counter-coup is also a real possibility

A counter-coup is also a real possibility. The security forces are unruly and fragmented into competing factions. Doumbouya remains an outsider in the Guinean political and military scene; he is young, relatively unknown and has only recently returned to the country after a career in the French army. The prospect of Condé’s succession has already exposed tensions, notably within the president’s inner circle. A political grouping could form an alliance with an army faction and attempt to grab power. Guinea has a record of such situations. When the former general of the army, Lansana Conté, seized power in 1984 following the death of president Sékou Touré, a subsequent counter-coup was brutally repressed. Similarly, after Conté’s death in 2008, a fellow officer attempted to assassinate the military junta’s leader, Moussa Dadis Camara.

The increasing number of coups and the return of juntas to power is a very worrying phenomenon for West Africa. The Guinean situation should give pause for thought to leaders seeking to retain their grip on power by any means, whether by manipulating electoral systems, amending constitutions, or installing authoritarian regimes that silence opposition figures.

International and regional actors should not simply take notice of this latest coup but also reflect on the dangers of accepting, endorsing or even encouraging for the sake of stability regimes ushered in after flagrant constitutional violations or questionable elections. ECOWAS and Guinea’s partners have little choice but to exert intense pressure for rapid reinstatement of a civilian, elected government. They must do everything in their power to prevent the coup’s leaders from single-handedly deciding how the transition takes place.

Gbagbo’s Return to Côte d’Ivoire: A New Opportunity for Reconciliation