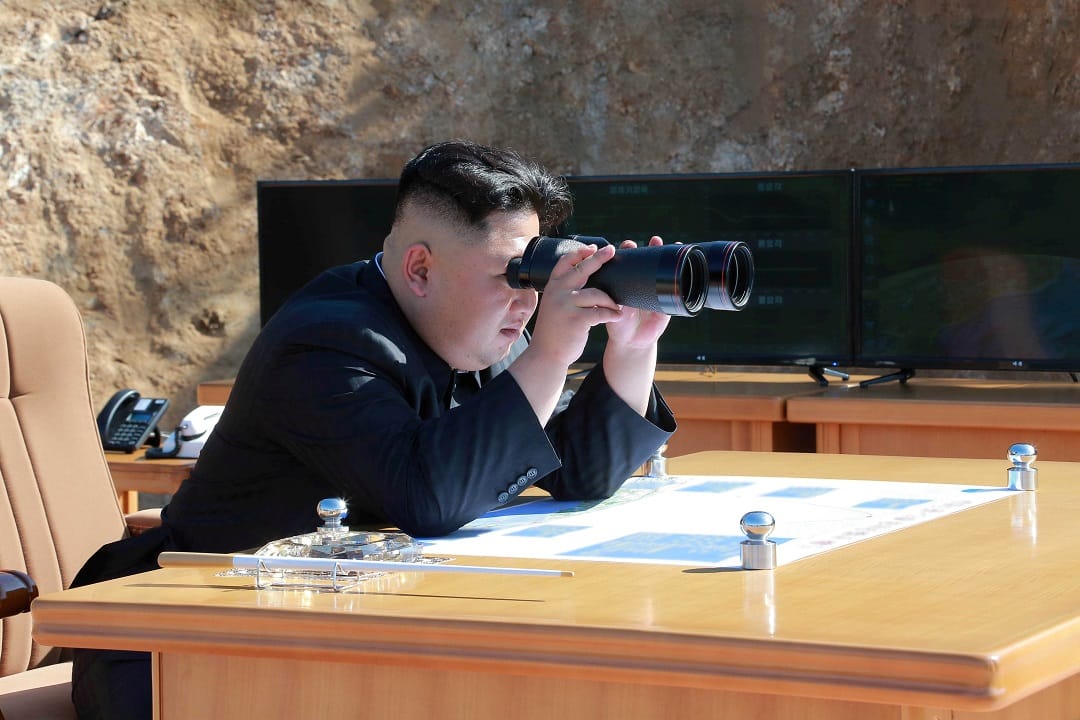 Fiery rhetoric between North Korea and the U.S. adds risks to Korean peninsula tensions, but should not cause panic. Outside players should maximise the potential benefit of an established pattern of de-escalation in the fall. They – and Pyongyang – should also back South Korea’s offers of dialogue.

North Korea once again captured the world’s attention when it boldly warned that it is ready to fire missiles over Japan toward the U.S. territory of Guam. The unusually specific and unacceptable North Korean declaration rattled governments in Seoul, Tokyo and Washington. But Pyongyang’s real target is not Guam, but to ensure it remains at the centre of the conversation. In this it has been significantly aided and abetted by U.S. President Donald Trump, who took with gusto to the unwise practice of trading direct threats with the Kim Jong-un regime.

Both sides have been contributing to an unhelpfully febrile and tense atmosphere. North Korea’s threat to launch missiles into the sea off Guam followed President Donald Trump’s alarming injunction that North Korea would face “fire and fury the likes of which the world has never seen” if it were to continue to threaten the U.S. Pyongyang’s statement in turn prompted President Trump to assert that his comment about “fire and fury” may in fact not have been “tough enough”. As the logic of one-upmanship intensifies, risks of miscalculation and misinterpretation inexorably are driven upward.

Amid the rhetorical escalation, some U.S. officials sought to introduce a sense of measure. Defense Secretary James Mattis, speaking in California on 10 August, reiterated that the U.S. seeks a diplomatic solution to the current standoff, echoing Secretary of State Rex Tillerson’s words from a week prior that the U.S. does not want regime change in Pyongyang. The two men then joined forces to make the same point in a Wall Street Journal op-ed. The Chairman of the U.S. Joint Chiefs of Staff, Gen. Joseph Dunford, declared in South Korea (Republic of Korea, ROK) last Monday that the current standoff should be resolved “without a war”.

In other words, by looking beyond Trump – not always an easy thing to do – there is evidence of a U.S. wish to talk its way out of the current crisis. Less so in the Democratic People’s Republic of Korea (DPRK). In the DPRK, regime officials are obliged to speak in one voice, that of the supreme leader, Kim Jong-un, and that voice regularly has chosen to respond to most forms of pressure with extreme vitriol.

Still, in its own way, North Korea also has conveyed signs of its desire to keep the Korean peninsula situation under control. Like the Trump administration, Pyongyang has been showing two faces at once. This is cause for confusion, but also of some reassurance.

[North Korea] intends to try to divide global opinion and keep the world guessing about its intent.

Take the recent release from detention of a Canadian pastor, Lim Hyeon-soo. Lim’s release suggests that, North Korea’s extreme bellicosity aside, the regime neither wants nor plans to fight or lose control of the situation. Rather, it intends to try to divide global opinion and keep the world guessing about its intent. For Pyongyang, foreign captives are an insurance policy of sorts. They are not ordinarily allowed to leave on the cheap. By letting pastor Lim go – a step that, upon his return to the pulpit last Sunday, Lim called a “gesture of goodwill in the face of so much rhetoric” – the implicit message from North Korea is that it seeks to keep events from going too far.

A few relatively moderate statements by Trump’s subordinates to counterbalance the U.S. president’s own repeated and dangerous bluster, coupled with a detainee’s release in the midst of North Korea’s highly incendiary words and actions, hardly are cause for comfort. But they are indications on which the international community should build.

However, that building will have to wait, at least for a while. Over the past several weeks and months, analysts and policymakers have offered a range of intriguing proposals for addressing the nuclear conundrum in a manner that addresses Pyongyang’s security concerns. But such proposals ignore Pyongyang’s and the peninsula’s peculiar calendar at their peril, since bad timing risks dooming them to failure. In the immediate future, dynamics are very likely to remain negative and North Korea impervious to forward-leaning ideas. On Monday, the U.S. and South Korea will begin the Ulchi Freedom Guardian joint military exercises that Mattis and Tillerson went the extra mile to defend in their op-ed. North Korea, unavoidably, will react to what it will perceive as a provocative action in the southern half of the peninsula.

Afterward, however, if history repeats itself, a degree of de-escalation could follow in the fall. In April 2013, when North Korea went so far as to unilaterally close down the Kaesong Industrial Complex, a deal eventually was reached and the manufacturing zone jointly run with South Korea returned to full operation in the middle of September. Likewise, after a feverish summer in 2014, three senior North Korean officials – Hwang Pyong-so, Choe Ryong-hae and Kim Yang-gon – made an unexpected appearance at the 17th Asian Games in Incheon, South Korea at the beginning of October. The visit resulted in the highest-level inter-Korean dialogue to take place during the term of former President Park Geun-hye.

No matter how insightful, proposals must take into account the fact that North Korea moves to its own rhythm.

No matter how insightful, proposals must take into account the fact that North Korea moves to its own rhythm. Putting forward a creative suggestion today risks eroding the credibility of those who make them, as they assume that North Korea is an object entirely responsive to outside forces. As the country moves to harvest season – corn, potatoes and soybeans at the turn of September, and then rice in late September and October – the country’s military will be mobilised to assist. This in turn will compel local media to shift the focus of their propaganda. It is hard to maintain a sense of strain and imminent conflict in the ranks while ordering units out into the fields.

History might not be a perfect guide, of course, given the unusual circumstances we now face. North Korea has reached the point of perfecting its missile systems. It may well be unwilling to subordinate the pace of testing to political calculations when it is so close to the goal-line. As for the U.S., whose president has elevated unpredictability to an art form, it is hard to turn to the past for reliable instruction regarding the future.

But other actors can and should play their part in pushing for restraint as soon as the time is ripe. That begins with South Korea. South Korean officials I have met in Seoul in the past weeks clearly believe that wild words are no substitute for a measured approach. Nobody in the political world or civil society here in South Korea has an appetite for further deterioration. That is not surprising. The pain and suffering of any misstep would fall disproportionately on South Korea. That is why the government is holding to a strategy that combines deterrence with patient outreach. The approach includes ongoing inter-Korean discussion on a range of matters, including sporting exchanges in taekwondo and the remote possibility of North Korean involvement in the 2018 Winter Olympics, which will be held in the South Korean mountain town of Pyeongchang early next year.

It is important for the U.S. to stand four-square behind South Korea’s attempts to spur dialogue.

True, South Korea has a weak hand to play, and North Korea has been dismissive of its efforts to date. The North’s representative on the International Olympic Committee, Chang Ung, said during a visit to the South in late June that time is running out, even if the political will to work together is there (which it currently is not). In the same vein, the North’s foreign minister told his South Korean counterpart at the ASEAN Regional Forum in early August that the South Korean policy “lacks sincerity”. But, remote as the prospects may seem today, it is important for the U.S. to stand four-square behind South Korea’s attempts to spur dialogue. Should Washington convey the impression that it is ignoring its alliance partner, it will only further diminish any incentive for – or pressure on – Pyongyang to pay it any heed.

Ultimately, a robust U.S.-ROK alliance, and the joint message that they have the will and capacity to defend themselves, is essential to avoid any dangerous miscalculation in Pyongyang. But deterrence alone cannot suffice. The apparent decision to scale back modestly the U.S.’s participation in the Ulchi Freedom Guardian military exercises – in terms of numbers of personnel and types of deployed military assets – is one way of sending a de-escalatory message. When tensions abate, as they should, the focus should shift to actively seeking new avenues for dialogue with South Korea in the lead, and to supporting inter-Korean engagement in the sporting arena and elsewhere. For its part, Kim Jong-un’s North Korean regime should show a modest degree of responsibility and accept the small steps forward publicly offered by Seoul.

North Korea: Beyond the Six-Party Talks