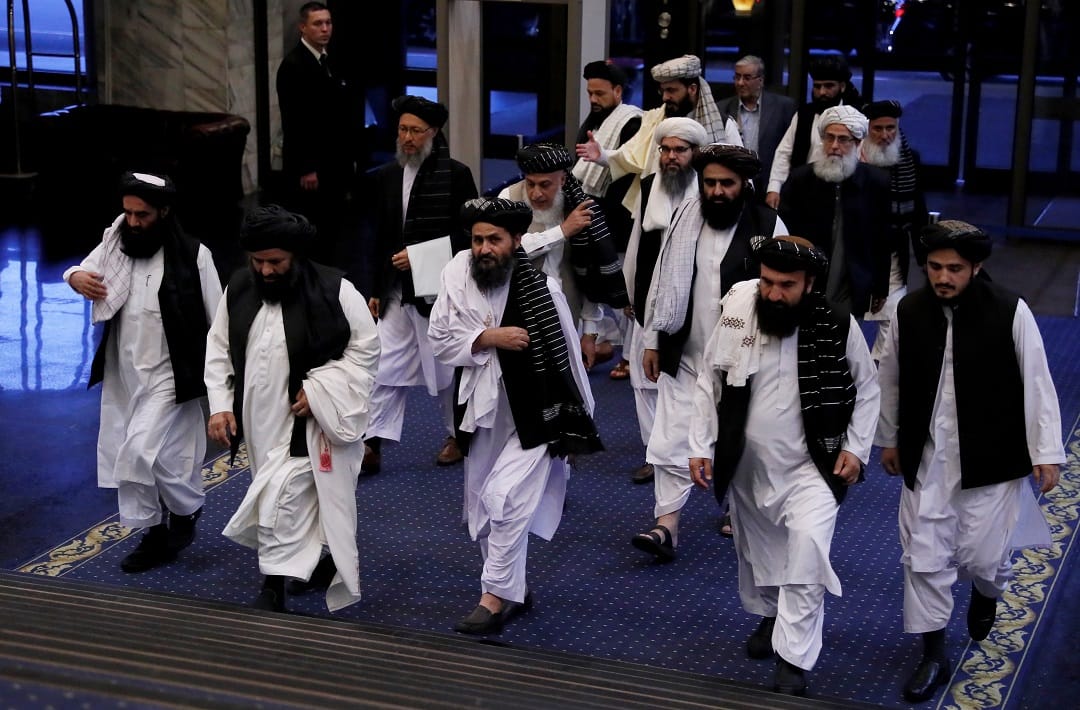 This week the Afghan government and Taliban met publicly for the first time – albeit informally – for a peace dialogue. Crisis Group’s Senior Afghanistan Analyst Borhan Osman explains what the talks mean and what may lie ahead.

What happened in Afghan peace talks in Doha?

Negotiations to end the Afghanistan war took a step forward on 7 and 8 July as more than 60 delegates, including Taliban and Afghan government officials as well as pro-government civil society representatives, gathered in the Qatari capital, Doha, for a peace dialogue. All participants joined the discussion in their personal capacities, which allowed the Taliban to continue refusing direct talks with the Islamic Republic of Afghanistan, as the Afghan government is formally known. The format also circumvented longstanding concerns in Kabul about giving recognition to the Taliban’s preferred name for themselves: the Islamic Emirate of Afghanistan. Setting aside the dispute over names and the underlying contestation of legitimacy, the two sides entered their first major – albeit informal – meeting.

Participants told Crisis Group that the atmosphere was respectful and constructive. A joint statement issued late on the second day struck a positive tone and outlined some shared principles but did not delve into specifics or point toward a follow-up meeting. Unlike previous events, which excluded Afghan government officials, and in which Taliban delegates generally restricted themselves to prepared statements, the Doha gathering turned into a conversation among Afghans about their shared future. Whether and how this ice-breaker event evolves into substantive negotiations on difficult issues, including the state’s structure and power-sharing in politics and security, remains to be seen.

Will the Taliban formally negotiate with the Afghan government?

The governments of Germany and Qatar facilitated the two-day dialogue in hopes that it would lead to direct negotiations. Afghan President Ashraf Ghani and Chief Executive Officer Abdullah Abdullah both responded to the Doha event with optimism that the Taliban would formally engage with their government. The Taliban, however, will be reluctant to sit down with Kabul’s representatives since they view that step as implying recognition of the government’s legitimacy. Taliban negotiators told Crisis Group that reaching even the current stage of informal talks represented a significant compromise on their part. Still, further shifts in the Taliban position remain possible, as the insurgents seem hopeful about progress on a related set of talks with the United States on withdrawal of troops.

"An agreement that is ambiguous about the Afghan peacemaking might hasten the U.S. withdrawal without a high probability of stability in its wake."

How are talks proceeding between the U.S. and the Taliban?

U.S. Special Representative for Afghanistan Reconciliation Zalmay Khalilzad met again with the Taliban on 9 July, amid growing anticipation that the parties could soon announce a preliminary deal. Khalilzad then departed for travel to China and Washington. Participants say the talks have been tough but appear to be building toward an agreement that would include Washington’s declaration of a timeline for withdrawal of U.S. troops from Afghanistan in return for Taliban guarantees not to harbour foreign militants. The emerging deal would link these two issues with two other conditions: a Taliban commitment to negotiate with the Afghan government and other political factions, and mutual commitment to military de-escalation or perhaps even a full ceasefire. The strength of the linkages between the first two items and the two more difficult parts – intra-Afghan talks and a ceasefire – would be the litmus test of any agreement. An agreement that is clear on the U.S.-Taliban deal but ambiguous about the Afghan peacemaking to follow might hasten the U.S. withdrawal without a high probability of stability in its wake.

How quickly could the U.S. and Taliban strike such a deal?

During his June visit to Kabul, U.S. Secretary of State Mike Pompeo said the U.S. wants a peace deal by September, before the Afghan presidential election planned for late that month. Some U.S. officials appear hopeful that, once a peace process starts moving ahead, Afghans from all political factions would prioritise Taliban negotiations over the planned election. Otherwise, the campaigning and voting risk distracting the parties from peace efforts, particularly as electoral disputes could drag on for months. Senior Afghan officials in Kabul told Crisis Group that the September goal for a peace agreement seems unrealistic. The government has been focusing on the election schedule, while expressing less urgency about peace talks. Breakthroughs in peace talks that push the election off centre stage in Afghan politics thus seem unlikely this summer. But diplomacy is proceeding at breakneck speed – putting great pressure on the Afghan conflict parties – and the outcome is hard to predict.

"Many people find it puzzling that progress in peace talks is coinciding with intensified violence on the battlefield."

Why is there a surge in violence?

Escalating violence on both sides has punctuated the peace negotiations. On 1 July, for example, a Taliban attack in downtown Kabul killed at least 35 people, drawing the UN Security Council’s condemnation. Following the incident, the Taliban published two online commentaries describing the attack as a response to the Afghan government’s growing campaign of airstrikes and night raids. Two days before the Kabul attack, an airstrike killed religious students as young as ten years old in Wardak province.

Many people living through the surge of attacks find it puzzling that progress in peace talks is coinciding with intensified violence on the battlefield. The combatant parties, however, seem to see logic where civilians see a contradiction. U.S. and Afghan officials told Crisis Group that increased military pressure on the Taliban would improve the U.S. and Afghan negotiating positions at the peace talks. As for the Taliban, members of both the military and political wings claim that they are not coordinating their actions in response to events in Doha. Still, at a minimum, the rising Taliban attacks do seem to be an effort to demonstrate that mounting military pressure will not set the movement back on its heels.

Escalating violence risks hardening positions at the negotiating table. Following the Taliban’s Kabul attack, for example, social media users in the capital called upon government officials to pull out of the peace dialogue event in Doha. Similarly, Crisis Group has observed a small, more radical segment of the Taliban trying to use the increased airstrikes, particularly the bombing of mosques and religious schools, to discredit the entire political process. The more violence intensifies, the more such naysaying will resonate.

What will be the main sticking points as talks proceed?

In the talks between the U.S. and Taliban, the most difficult issue is the troop drawdown timetable – both how stretched out the drawdown will be, and whether it will commence and proceed unconditionally or be tied to progress in the peace process or other requirements. Both sides have been tight-lipped on progress in negotiating over this issue, but reportedly the Taliban have insisted on a nine-month timeline, whereas the U.S. has offered one two and half years long.

Among Afghan negotiating parties, reaching consensus on changes to the form of government is likely to be difficult. The Taliban insist on establishing an Islamic government, without as yet clarifying how, in their view, that would differ from the current Islamic republic. The parties will also sharply contest the timing for a comprehensive ceasefire. The Taliban prefer to continue fighting during negotiations in order to maintain their leverage, while the pro-government side seeks an early suspension of hostilities. For Afghan political groups and ordinary people who are sceptical of the Taliban’s sincerity in negotiations, progress would require the insurgents at least to commit firmly to an eventual ceasefire. Many Afghans consider a ceasefire the most visible proof that the Taliban are ready to make the transition to mainstream politics.

Interpreting the U.S. Talks with the Taliban

Up Next
Op-Ed / Asia

In August 2021, Afghanistan was thrust back into the headlines. Taliban forces rapidly closed in on Kabul, and the United States began making its final military withdrawal. Suddenly, the world was confronted with images of desperate people squeezing their way into Kabul’s airport for a chance to flee. Almost overnight, nearly everything that the United States and its allies had accomplished in 20 years of fighting, spending, and building in Afghanistan disintegrated. For the one million or so Americans who had taken part in those failed endeavors, and for the millions of young Afghans who had grown up under a Western-backed democracy, flawed though it was, such losses were head spinning. With their livelihoods imperiled, and with many fearful for their lives, hundreds of thousands of Afghans sought to leave the country, posing a new challenge for withdrawing Western forces.

The United States didn’t expect to mount such a large evacuation, or at least not so quickly. Over ten days, the U.S. military and its allies airlifted about 120,000 people, including 80,000 Afghans, from Kabul, mostly to military bases in the Middle East, from where they eventually left for the United States and elsewhere. The effort was chaotic. For those without a U.S. passport or visa, often the only ticket out was a personal connection to someone who could pull strings with U.S. personnel on the ground. American veterans, former diplomats, aid workers, and journalists scrambled to find passage for vulnerable Afghans. Many Afghans who wanted to leave were turned away. Amid this crisis, many Americans who had served in Afghanistan were angry that the evacuation was so haphazard and left behind so many Afghans they believed to be at risk.

One of those Americans was Elliot Ackerman, who served in Afghanistan as a marine and later as an adviser to Afghan counterterrorism teams under a CIA-led program. In the final weeks before the U.S. withdrawal, he joined a series of impromptu efforts to help evacuate small groups of Afghans. Ackerman used his connections to the U.S. military and other agencies involved in the evacuation to help Afghans get into Kabul Airport and onto planes. In The Fifth Act, Ackerman describes these efforts, interweaving the account of the withdrawal with his combat experiences and views on what went wrong with the war.