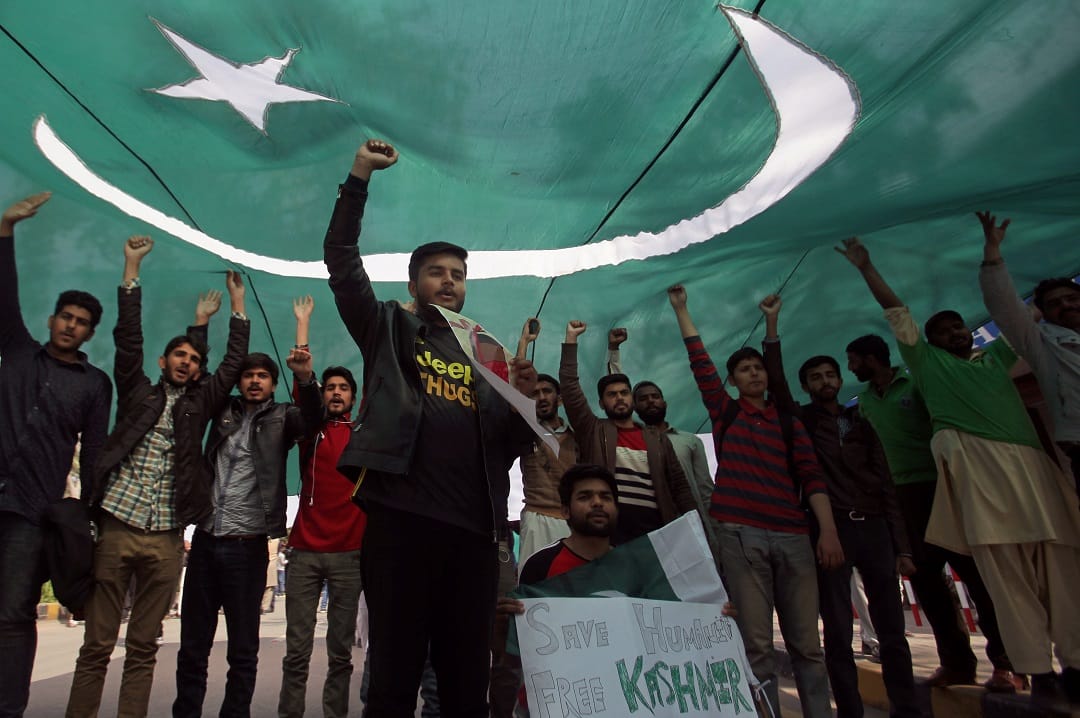 Students chant slogans under the shade of national flag, after Pakistan shot down two Indian military aircrafts, according to Pakistani officials, during a march in Lahore, Pakistan 28 February 2019. REUTERS/Mohsin Raza
Q&A / Asia 01 March 2019

Reciprocal airstrikes by India and Pakistan have been accompanied by shelling, troop reinforcements and small arms fire. In this Q&A calling for restraint between the nuclear-armed neighbours, Crisis Group’s Asia Program Director Laurel Miller notes that the airspace violations alone were the worst for 50 years.

On Tuesday, 26 February, India claimed that its air force had targeted “the biggest training camp of the Jaish-e-Mohammed … in Balakot”. The strikes – the most significant airspace violations in nearly 50 years – followed a deadly 14 February suicide car bombing in Pulwama in Indian-administered Jammu and Kashmir (J&K), which had been claimed by the Pakistan-based Jaish-e-Mohammed militant group. India said it launched a “preventive strike” based on intelligence that Jaish intended to attack again. At a press conference, Foreign Secretary VK Gokhale said Pakistan “failed to take any concrete action against terrorists” and that the strike on the training facility had “killed a large number”. In its official statement on the airstrike in Pakistan-administered Kashmir, the Indian government said, “The existence of such massive training facilities, capable of training hundreds of jihadists could not have functioned without the knowledge of Pakistani authorities”.

Pakistan refutes Indian officials’ claims that more than 300 Jaish militants were killed in the attack. It acknowledges however that eight Indian Air Force jets had violated the Line of Control, which divides Pakistan’s Azad Jammu and Kashmir (AJK) and Indian-controlled J&K. The Pakistan military’s spokesperson said that its Air Force’s “timely and effective response” had forced the Indian planes to retreat, dropping their bombs in an uninhabited area near Balakot in Pakistan’s Khyber Pakhtunkhwa province, causing no casualty or damage.

On 27 February, Pakistan’s foreign ministry said its Air Force had conducted six strikes on “non-military targets” in India to demonstrate the country’s “right, will and capability for self-defence”. Pakistan downed an Indian jet that entered its airspace in pursuit of the Pakistani aircraft, leading to the pilot’s capture. India claimed to have downed one of the intruding Pakistani jets.

Resort to military force for political ends increases the risks of escalation, no matter how unintended.

Although it is clear that cross-Line of Control attacks and aerial skirmishes between the two sides occurred, it is difficult to verify both countries’ claims and counter-claims of targets and impact. Pakistani officials have provided evidence, also circulated on social media, of the downed Indian jet and the captured pilot, but claims of six successful strikes conducted in Indian-controlled Kashmir are more difficult to verify. Despite ample evidence of its cross-Line of Control attacks, Indian claims of killing hundreds in the airstrike on a Jaish training base and downing a Pakistani jet lack credence since New Delhi did not provide any evidence.

Why did it happen?

India’s and Pakistan’s latest skirmishes are as much aimed at assuaging domestic constituency concerns as they are at convincing each other of their capacity to strike and seriousness of intent. Still, resort to military force for political ends increases the risks of escalation, no matter how unintended.

In the Indian context, Narendra Modi’s Bharatiya Janata Party (BJP) government felt compelled to react in light of the countrywide outrage in the wake of the 14 February Jaish suicide car bombing. With elections months away, Modi, responding to domestic opinion – particularly that of his hardline BJP constituency – vowed to avenge the dead in Pulwama, including at least 40 Indian paramilitary police officers. “We will give a befitting reply; our neighbour will not be allowed to destabilise us,” he said, giving his security forces “permission to take decisions about the timing, place and nature of their response”. That response came in the shape of the 26 February airstrikes across the Line of Control.

Within Pakistan, given a long history of distrust toward, and war with India, the powerful military establishment had to demonstrate to constituencies at home that India’s hostile designs would be forcefully thwarted. On 22 February, days before the Indian Air Force strikes, the military’s spokesperson warned that, if India were to attack, Pakistan would never “fall short of capacity” and would “dominate the escalation ladder”. The day of the 26 February Indian attack, reiterating these warnings, the spokesperson referred to a meeting of the National Command Authority (NCA), which oversees Pakistan’s nuclear arsenal, saying to India, “I hope you know what the NCA means and what it constitutes”.

What could happen next and why does it matter?

Both sides have left themselves room to climb down. Pakistani and Indian officials insist that their governments have no intention to escalate hostilities further. On 27 February, Pakistan’s military spokesperson said the Pakistan Air Force could have targeted a major Indian military installation in the strike area but chose to attack “in open space”, causing no casualties, so as to avoid escalation. The same day, speaking at a Russia-India-China foreign ministers meeting in Beijing, Indian Minister of External Affairs Sushma Swaraj said the 26 February strike, meant to pre-empt another terror attack, “wasn’t a military operation, no military installation was targeted”. India, she said, “doesn’t wish to see further escalation of the situation”.

For his part, Pakistani Prime Minister Imran Khan called for restraint and diplomatic engagement and at the same time vividly highlighted the risks inherent in the current situation. The same day as his country’s planes launched strikes across the Line of Control, Khan elliptically referenced the nuclear capabilities in a television interview and said, “With the weapons you have and the weapons we have, can we afford miscalculation? Shouldn’t we think that, if this escalates, what will it lead to?” He also offered to release the captured Indian pilot and to cooperate with India in investigating the Pulwama attack.

New Delhi and Islamabad should immediately and urgently revive the hotline between their Directors General for Military Operations, a crucial mechanism to prevent unintended and inadvertent conflict escalation.

Despite Khan’s acknowledgement of escalation risks, and Indian and Pakistani claims of responsibility and restraint, their armies are continuing to clash with artillery shelling and small arms fire along the Line of Control. Meanwhile, tensions are also high within J&K due to an Indian crackdown on Kashmiri dissidents, which could provoke more alienated youth to join militants. This apparently was the case of the 14 February suicide bomber, who came from a village close to the site of the Pulwama attack.

What should be done?

The international community, including China, the EU and European governments, have called on India and Pakistan to exercise restraint and prevent further escalation. In Washington, expressing U.S. concern about the tit-for-tat attacks, a White House official said, “The potential risks associated with further military action by either side are unacceptably high for both countries, their neighbours, and the international community”.

If the two sides are to step down from the brink, their leaders, civil and military, should resist the temptation to pander to domestic constituencies and tone down hostile rhetoric.

There is little foreseeable prospect, no matter how desirable, of the top Indian and Pakistani leaderships re-establishing direct communication channels and bilateral dialogue. These have been frozen since the 2016 terror attacks in Indian Punjab and Indian-administered Kashmir, which New Delhi attributed to Pakistan-based militants. Nevertheless, New Delhi and Islamabad should immediately and urgently revive the hotline between their Directors General for Military Operations, a crucial mechanism to prevent unintended and inadvertent conflict escalation.

In the short and medium terms, New Delhi should rethink its approach toward and within J&K, ending the heavy-handed militarised response that has contributed to growing local alienation and disaffection. Pakistan should rethink its longstanding policy of supporting anti-India jihadist proxies, such as Jaish, that – as this latest round of escalation shows – are far more of a threat to national security than an asset.

This article was corrected on 2 March 2019 to place Balakot in Pakistan's Khyber Pakhtunkhwa province, not Azad Jammu and Kashmir, as first reported by Pakistan.

Pakistan: Challenges of a Weak Democracy