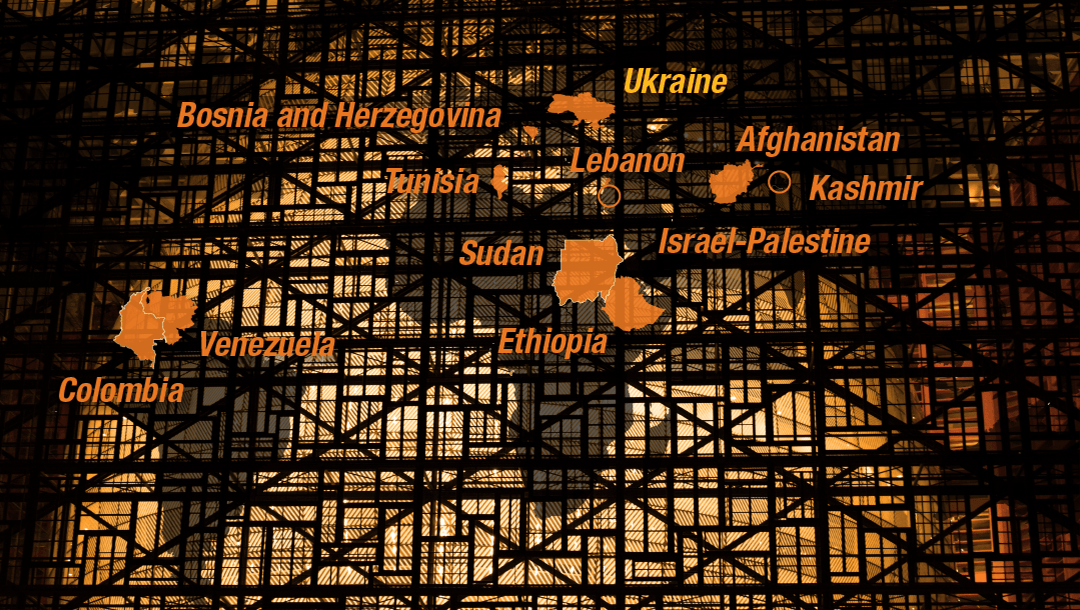 Europe and the Ukraine Crisis

Russian troops are gathering in ever larger numbers at Ukraine’s border. If the crisis escalates, it could pose the gravest threat to European security in decades, which is why Ukraine topped our global rundown of the world’s most pressing conflicts in 2022 and why I’m covering it here. One can only hope that the frantic diplomacy currently under way will avert what could be an enormously destructive war. Already, though, the crisis poses European leaders thorny questions about how to maintain a united front against Moscow’s intimidation, about what would happen were Russia to escalate in Ukraine and about the continent’s security architecture more broadly.

While Ukraine has been at war since 2014, when Russia helped separatists seize part of Ukraine’s east, this latest military buildup could herald a confrontation on a vastly different scale. Eight years ago, Russia, angry at what it saw as the Western-backed overthrow of a leader in Kyiv friendly to Moscow, annexed Crimea and helped separatists seize territory in Donetsk and Luhansk, in Ukraine’s eastern Donbas region. Russia still holds Crimea, while low-intensity fighting continues along front lines in Donbas. In March and April 2021, Moscow placed substantial infrastructure and forces near Ukraine, but pulled back the troops within weeks. In the autumn, it commenced a new buildup, notably on Ukraine’s northern and eastern flanks.

While Moscow insists that Western media and governments are overhyping the threat, denying that anything out of the ordinary is afoot, Russia has, in the course of negotiations with Western powers, put forward demands that make clear what it wants: in short, to recoup a sphere of influence that Moscow feels is its due. Some demands explicitly concern Ukraine, but most are broader. Russia wants iron-clad guarantees that the North Atlantic Treaty Organization (NATO) will not expand further, including into Ukraine, and that the alliance’s military drills with Russia’s neighbours in eastern Europe and the Caucasus will cease. Moscow also wants NATO to pull forces and infrastructure out of countries that joined the alliance after 1997. It has reiterated its desire for a mutual ban on the deployment of intermediate-range missiles in Europe and the removal of U.S. nuclear weapons from the continent.

Russia also has demands of Ukraine itself, which date back some years. These focus on implementation of the Minsk agreements, signed in 2014 and 2015 with the aim of ending fighting in Donbas. Those accords’ terms, according to Russia’s understanding, would grant separatist-held areas “special status” that, in effect, gives them and therefore Moscow a veto over aspects of Ukrainian security and foreign policy. Moscow thus aims to curtail and reverse Ukraine’s growing closeness to Western states and aspirations for NATO and European Union (EU) membership.

[Member states] agree that conceding to Russian gunboat diplomacy would set a dangerous precedent for future encounters with ... Moscow.

Nothing suggests that Ukraine or its Western supporters will capitulate. Although Kyiv’s official line is that Ukraine will implement the Minsk agreements when and if Moscow holds up its side of the deal, many officials view those accords as setting the terms for an unjust victor’s peace. Russia’s policies since 2014, particularly its support for the separatists, have only deepened hostility to Moscow among Ukrainians. As for NATO’s leaders, accepting curbs on the alliance’s membership and rolling back to the 1997 balance of force are out of the question. The alliance has no present plans to bring Ukraine into NATO, but its longstanding policy is that it will make such decisions itself, not be forced into them by outside powers. Meanwhile, newer member states see Moscow’s proposed restrictions on force presence as intended explicitly to leave them undefended. Finally, members agree that conceding to Russian gunboat diplomacy would set a dangerous precedent for future encounters with a Moscow eager to assert itself across the global stage.

Nor, however, do Western states intend to go to war with Russia over Ukraine – which does not benefit from the security guarantees that bind NATO members. Instead, working together and communicating both unilaterally and through NATO and the European Union, they have threatened to impose dramatic costs on Moscow if it escalates, without upping the stakes so high that a global conflagration is in the offing. At the same time, they have opened the door to negotiations that, while not giving Moscow what it demands, could lay the building blocks for exercise and deployment limitations that might leave everyone more secure. If, however, Russia concludes that escalation will strengthen, rather than weaken, its negotiating hand vis-à-vis both Ukraine and its Western friends, then negotiations may come only after it has made a move.

That would mean more, and potentially greater, war. What that will look like and how long it will last is unclear. Admittedly, thus far there is no drumbeat in the Russian media. But Russia’s buildup gives Moscow many options. It could reprise its 2014 and 2015 interventions, backing separatist forces to pressure front lines or sending in Russian forces to carve off more territory. The size and scope of the buildup would also allow for an all-out assault that sees Russian forces attempt to seize and occupy wider tracts or even all of Ukraine. The core goal of military action would likely be to force Ukraine to comply with Russia’s understanding of the Minsk agreements, or to force the Ukrainian president himself from office in favour of a government friendlier to Moscow.

However much Russia believes it could improve its hand with another escalation, such a step ... would leave everyone far worse off.

However much Russia believes it could improve its hand with another escalation, such a step – whether small or large – would leave everyone far worse off. Ukraine will suffer most grievously. Alongside the bloody, destructive mayhem of war, vulnerable Ukrainian civilians will surely flee their homes, creating flows of displaced people within Ukraine and in all probability into Poland, Russia and perhaps other neighbours. Moscow, for its part, will face stronger Ukrainian opposition than it expects, especially if it tries to occupy all or part of Ukraine, with attendant human and economic costs. Its own economy will suffer as a result of the sanctions Western states have threatened and will impose. EU member states, too, will suffer economically, especially if an energy crunch results. World markets and economies, already volatile after two years of pandemic, could be hit by the proposed sanctions. Moreover, if Moscow expects a conflict to improve its negotiating position with the West it is sure to be disappointed. Western powers will instead focus on precisely the military buildups on NATO’s eastern flank that Russia wants to avoid, potentially making the continent as a whole more unstable and future crises involving NATO and Russia all the more dangerous.

But if diplomacy succeeds in averting conflict in the near term, more crises will follow unless Western leaders and Moscow commit to what will likely be even harder negotiations aimed at laying the groundwork for a more stable European security architecture, one that reflects today’s fears, interests and weapons technologies rather than those of three decades ago. As Crisis Group laid out in a December 2021 briefing, the resulting new arrangements might include the military exercise and other limits Western states have already put on the table, as well as a pledge to limit intermediate-range and other weapons and military activities in volatile zones, like the Black Sea and Baltic Sea regions. NATO could reaffirm prior commitments to not station substantial combat forces on the territories of new members (and work with Moscow to define what substantial means in this instance). NATO leaders cannot and should not guarantee that the alliance will never enlarge, but they could make clear that they have no plans to admit Ukraine or Georgia in the foreseeable future. All parties could pledge not to place weaponry or infrastructure on the territory of non-allies (with provisions for agreed-upon exceptions). All could also agree that their promises will be null and void if and when another party violates its own pledges.

Sketching out the notional contours of a deal is, of course, much easier than negotiating one. Even if Russia agrees to talks, exchanges of views to date show how far apart its and NATO’s positions are. Western powers may also struggle to come to unified positions on issues where European states – facing a wide range of security threats and economic risks – have very different perspectives.

That said, for now Western powers have been reasonably united. Although the potential costs of sanctions will not be equally borne within NATO or the EU, European member states have spoken with one voice on the need to respond to aggression and support Ukrainian sovereignty. To be sure, there are differences on tactics, some countries preferring to send lethal assistance, others, including EU institutions, leaning toward other forms of support. But such efforts can and should be seen as complementary. Maintaining overall policy coherence is critical, as is contributing to both diplomacy and deterrence in cooperation with their counterparts in Washington and Ottawa. If that happens, the approach so far – forging a path between capitulation and the risk of a dangerous military confrontation between NATO and Moscow – is the right way forward. As for Russia, it now faces a decision that could shape security dynamics in Europe for years to come. It can make a move toward negotiations and the prospect of a more secure and stable environment for all Europeans. Or it can place its bets on more war and all the risk and horror that entails. For Ukraine’s sake, and for all of Europe, Russia included, we must hope that President Vladimir Putin opts for talks.