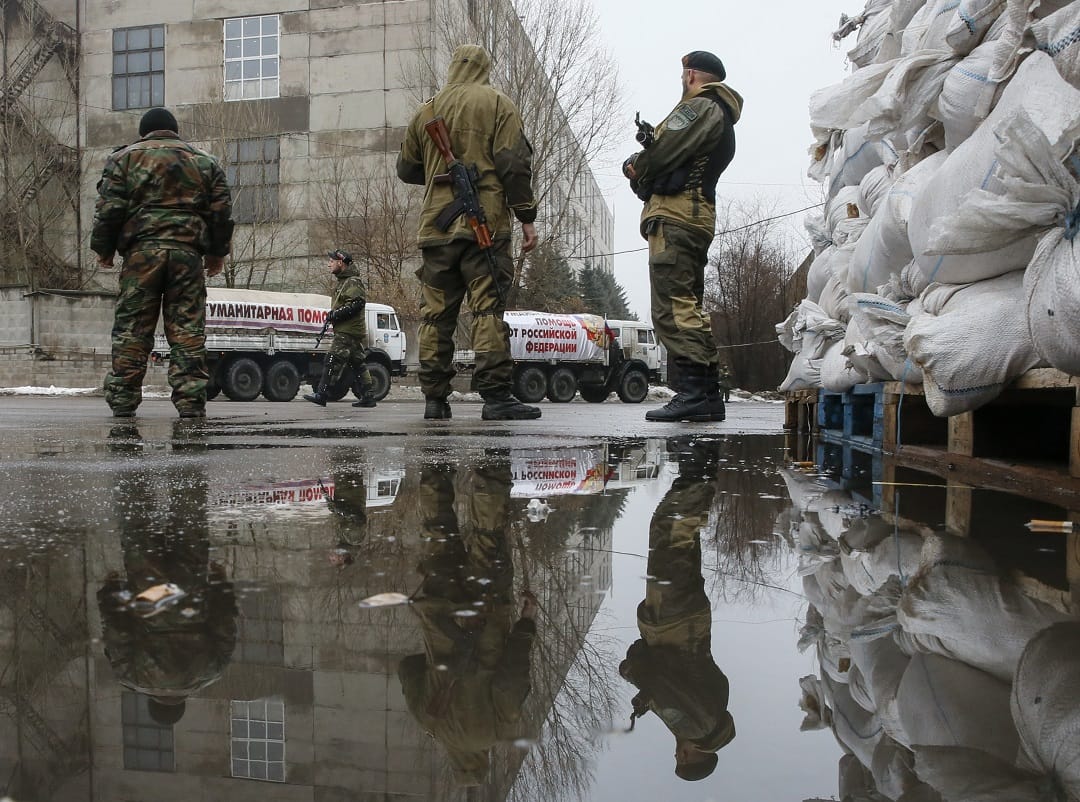 Getting Aid to Separatist-held Ukraine

The front lines in eastern Ukraine are slowly freezing in place, as is civilian deprivation in the conflict zone. An embargo, bureaucracy and distrust conspire to keep humanitarian aid out. Russia and Ukraine should find politically neutral ways to unblock the flow of assistance.

After five years of war, a humanitarian crisis drags on in the self-proclaimed Luhansk and Donetsk People’s Republics (L/DPR), the parts of eastern Ukraine nominally governed by Russian-backed separatists. More than 3.5 million people in eastern Ukraine are in need of aid, according to UN figures. The need is particularly dire in the rebel-held territories, which confront a Ukrainian economic blockade as well as isolation imposed by the rebels themselves. The aging segment of the L/DPR’s population is hardest-hit of all, struggling to get by on pensions as low as $30 per month. But humanitarian groups face several obstacles in getting these people the aid they need.

All sides are erecting hurdles. Citing obstruction by the L/DPR authorities, the UN has scaled back its humanitarian response in rebel-controlled areas, focusing on the less hard-hit but still in need people on the government-controlled side of the line. Ukraine’s trade blockade of the L/DPR limits aid access. Russian humanitarian groups say indiscriminate shelling from the Ukrainian side of the contact line makes aid distribution dangerous, and that they also face obstacles from L/DPR authorities whom they decry as corrupt. They perceive the Russian government as doing too little to coordinate assistance efforts and say they cannot trust anyone in power.

Humanitarian aid could yet be a rare, vital avenue of cooperation among the Russian, Ukrainian and European governments.

“The Russians, they have forgotten about them [people in eastern Ukraine]”, said Marina (not her real name), a Muscovite who regularly travels to Donetsk to deliver goods and help families buy groceries. After trying to work through established charities operating in Russia, she decided to go solo, citing a lack of transparency and corruption. “The government of L/DPR, when it comes to big convoys there, they just steal the goods”, she added. Another aid worker in Rostov-on-Don, a Russian city not far from the separatist-controlled areas, told a similar story. Exasperated, she founded her own charity, which distributes food, money, toys and animated films to children in affected areas.

Many of the independent Russian aid workers who raise these concerns sympathise with the separatist cause. But the depth and frankness of their frustration reflects their belief that both Kyiv and Moscow have abandoned the people whom the workers are trying to serve. As the conflict stagnates, and contact across the front lines becomes ever more difficult, humanitarian aid could yet be a rare, vital avenue of cooperation among the Russian, Ukrainian and European governments. That, however, will require all sides to focus on the residents’ plight rather than tactical gains vis-à-vis their adversaries.

Over five years of conflict, humanitarian access to the east has shrunk. Early in the war, militias supporting the Ukrainian government, such as Dnipro-1 and Aidar, were known to intercept humanitarian convoys headed to L/DPR territories because they did not want supplies getting through to people they regarded as the enemy. In 2017, Kyiv imposed an economic blockade on the separatist-controlled areas, not only paralysing what remained of the war-shattered L/DPR economy, but also in effect slashing the volume of assistance distributed there. As Crisis Group has reported, the embargo made an explicit exception for humanitarian convoys crossing the contact line. Yet in practice it kept aid out, because charities legally registered in Ukraine could no longer function in the L/DPR due to a combination of Ukrainian and L/DPR regulations, and to the ways in which L/DPR authorities adapted to the embargo. Before the blockade, for instance, one of the chief aid distributors in these territories was a foundation run by steel magnate and Kyiv loyalist Rinat Akhmetov. After the embargo, self-declared DPR authorities seized Akhmetov’s assets, causing aid distribution to fall precipitously. Meanwhile, these authorities have also interdicted aid shipments from politically neutral parties: as late as this year, forces loyal to the self-proclaimed republics reportedly blocked Red Cross convoys, giving no explanation.

Self-proclaimed L/DPR authorities obstruct efforts by groups entering from Ukrainian-controlled territories on the grounds that they are not humanitarian agencies, but enemies.

Today, many humanitarian organisations cannot reach people in need, according to aid workers from Russian and international groups interviewed by Crisis Group. Ukrainian authorities will often refuse accreditation to organisations trying to deliver aid to the L/DPR from the western, Ukrainian side if in the past they have crossed into the L/DPR from the eastern, Russian side. Kyiv distrusts such groups, viewing them as collaborators with L/DPR de facto authorities. For their part, self-proclaimed L/DPR authorities obstruct efforts by groups entering from Ukrainian-controlled territories on the grounds that they are not humanitarian agencies, but enemies.

Russian groups, which enter through Russia and therefore should be both free of Ukrainian red tape and trusted by the L/DPR, also face problems. Alexei Smirnov runs the crowdfunded Angel Humanitarian Group, based in Moscow. Angel volunteers travel to residential areas along the contact line on the L/DPR side as often as twice a week to deliver goods and medicine. Smirnov does not deny that some of his foundation’s personnel may have fought alongside pro-Russian rebels in the past. He says they no longer do so, however, and adds that his organisation seeks to be politically neutral. Smirnov complains that Ukraine nonetheless treats his staff like combatants. “We get shot at [by the Ukrainian forces] because they think we are enemies and because we show what it is like in those residential areas”, he said, referring to Ukrainian forces’ shelling of civilian areas.

Smirnov insists that his group does not seek support from Russian authorities. “We don’t accept help from Russia because that would only increase suspicion. Or they could take advantage of us”.

The economic strangulation of these isolated territories dims prospects for their peaceful reintegration into Ukraine.

Meanwhile, Russian aid groups find that coordination with Russia’s Emergencies Ministry, which gathers medical and food aid supplied by federal and regional bodies and ships it to L/DPR, is difficult or non-existent. “There is no documentational framework for us to coordinate together with [the Ministry]”, said one independent Russian aid worker. “We can’t really track the aid they send there or verify that it has actually reached civilians”. Amid the lack of both coordination and common guidelines, grassroots groups distrust each other as well as Moscow, trading accusations that some workers are merely enriching themselves instead of delivering aid to needy people. This mistrust, the aid worker said, dominates the sector and keeps grassroots groups from getting along. “There is no friendship. No coordination”. The inability to get along hampers the formation of more effective networks that could work with government agencies to maximise access.

As a result, the overwhelming bulk of aid to rebel-held areas comes from the Russian government, via regular convoys sent by the Emergencies Ministry, but independent aid workers say it’s unclear how many of those goods actually reach the people in need. Since the conflict began, the Ministry reports, it has dispatched more than 80 convoys, each carrying up to 500 tonnes of goods. Though these numbers seem impressive, other figures point to huge unmet needs: as of late 2018, also according to Ministry figures, 160,000 of the DPR’s 2.3 million people were able to receive aid packages at distribution points. The UN estimates that over 20 per cent of the L/DPR’s population is food-insecure. Indeed, independent Russian aid workers who travel regularly to the affected areas say that Emergencies Ministry aid is, in their words, barely keeping civilians on life support. Moreover, its convoys are part of the reason why Smirnov and his volunteers have such a hard time: Ukrainian and international groups accuse Russia of secreting undeclared weapons and ammunition amid the supplies. Ukrainian authorities assume that independent Russian aid workers are doing the same – and thus treat them like combatants.

Aside from the humanitarian implications, the economic strangulation of these isolated territories dims prospects for their peaceful reintegration into Ukraine. Reliance on Russian aid, insufficient though it is, makes both the civilians and authorities of L/DPR more dependent on Moscow and more alienated from Kyiv. But it is also bad for Russia. The trickle of assistance from Russia and the lack of coordination with grassroots groups undermines the morale of once dedicated aid workers, leading to even fewer aid deliveries and greater dissatisfaction with Russia’s efforts both at home and in L/DPR. Russia is already seeking ways to pay less for assistance, local media reports suggest, and the Emergencies Ministry recently postponed a planned column of its aid trucks amid plans to “restructure” aid. The more difficult it is for grassroots groups and international agencies to deliver aid, the larger the burden for Moscow in feeding a hungry region outside its borders.

Both Russia and Ukraine should explore politically neutral options for getting more humanitarian aid into the affected regions. Facilitating aid to civilians in the unrecognised statelets could open up avenues of bilateral cooperation that, with time, could make political dialogue easier.

Kyiv in particular should explore ways to facilitate aid as part of a wider policy of treating civilians of the east as Ukrainian citizens in dire need of aid, rather than as combatants or instruments in political battles.

One way to ease access for aid groups might be to set up an independent observer body staffed by Russians, Ukrainians and nationals of a third European country perceived as relatively neutral, such as Austria, Germany or Italy. This body could establish transparent guidelines to verify the neutrality of aid groups regardless of their country of origin, while ensuring aid, not weapons, are delivered. The body could work together with the Organization for Security and Cooperation in Europe (OSCE) – which is monitoring the ceasefire at the contact line and overseeing negotiations that are part of the Minsk peace plan – in accrediting aid providers.

Even such a body, however, will not be enough absent a broader shift toward reconciliation. Kyiv in particular should explore ways to facilitate aid as part of a wider policy of treating civilians of the east, regardless of their political affinities, as Ukrainian citizens in dire need of aid, rather than as combatants or instruments in political battles. There are many ways to signal this, and a new president means new opportunities to do so. Ukrainian President-elect Volodymyr Zelensky has argued in favor of re-engaging with Ukrainians in the east. One concrete way to start could be for Kyiv to make a concerted effort to ensure that pensions reach civilians in rebel-held territories, in accordance with Ukrainian laws. Kyiv should also explore ways to ease the embargo – something that may also indicate Kyiv’s newfound interest in reintegrating the rebel-held territories rather than isolating them or pushing them toward Russia.

As matters stand, as Alexei Smirnov put it, aid provision “is in a state of chaos. It doesn’t work”.

A Shadow over Ukraine’s Presidential Election