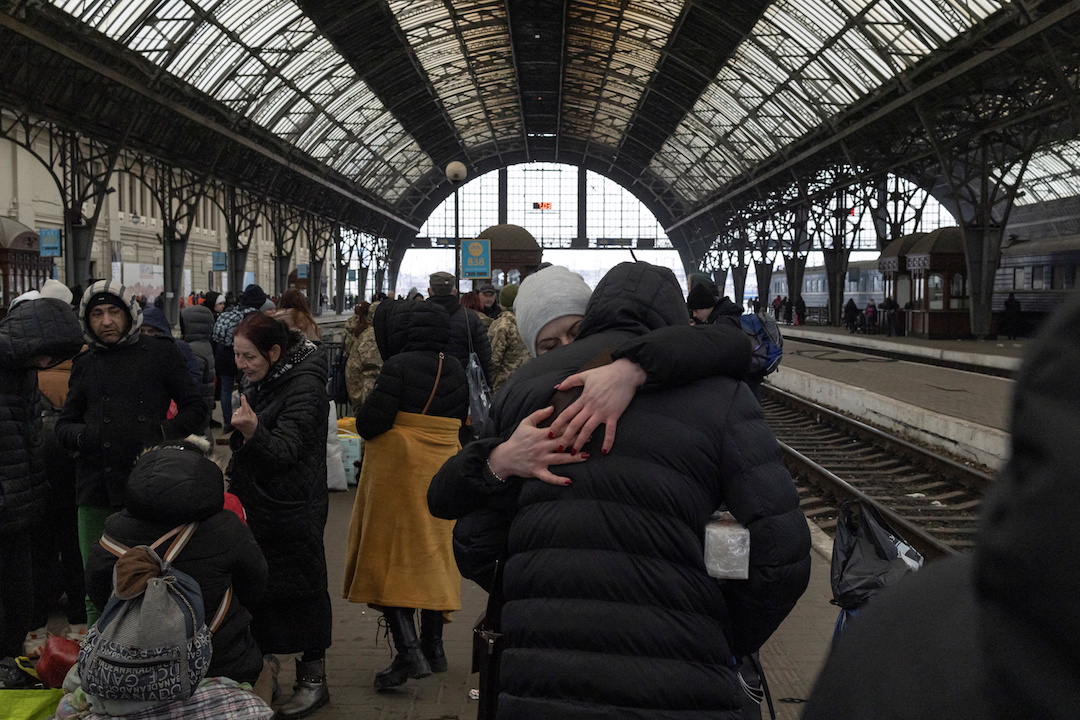 Over three million Ukrainians have fled the Russian invasion that began on 24 February. While EU states have granted arrivals real benefits, Kyiv’s rule holding back conscription-age men increases dangers to the families leaving. States should ensure that all refugees get the help they need.

More than three million refugees have left Ukraine since Russia launched its full-scale invasion in the early hours of 24 February. The people fleeing are mostly women, children and the elderly, because Kyiv has forbidden men between the ages of eighteen and 60 to leave. This policy is understandable in the face of the existential threat the invasion poses to the country. But it may make the refugees’ journey into the unknown more dangerous and the task of rebuilding their lives much harder. Nor does it appear yet to have contributed much to Ukraine’s actual fighting capacity, since so many women and men have voluntarily stayed behind, eager to take up arms in their country’s defence. In the long run, Ukraine’s defence will depend as much on the morale of its troops and their willingness to fight as on sheer numbers – though, for now, Ukraine appears unlikely to be short of volunteers any time soon. The Ukrainian government should reconsider its approach and work with partner nations to make sure that its citizens continue to be welcomed regardless of age or gender.

Generally, the Ukrainians now arriving in European Union (EU) countries are finding better conditions than refugees in earlier crises. Amid an outpouring of solidarity with Ukraine throughout Europe, the European Commission on 2 March adopted a right to stay approach for the first time since the measure was developed in 2001. This legal instrument allows Ukrainian refugees to travel freely within the EU’s borders, to stay where they choose, to work legally and to get access to social services. The right to stay, although limited to one year, will spare Ukrainian refugees the experience of being trapped for months in the asylum systems of the country in which they first arrive. State railway companies in many EU countries and some airlines have made Ukrainian refugees’ travel easier by letting them ride for free.

Only women, children and the elderly can profit from Europe’s open doors.

In practice, however, only women, children and the elderly can profit from Europe’s open doors. The Ukrainian government declared martial law right away on 24 February, and the border guard announced, without further explanation, that it would not allow men of military age out of the country as long as martial law remains in force.

These restrictions, meant to reinforce Ukraine’s fighting capability, instead have deepened the unfolding humanitarian crisis. In principle, it might make sense to subordinate humanitarian considerations to the military logic that able-bodied men must be on standby should they be needed at the front. But so far, there is little indication that this logic is right. Outside Russian state media, whose reporting on the war is obviously suspect, there is no sign that Ukrainian soldiers are abandoning their positions. To the contrary, the Ukrainian ministry of defence reports that more than 60,000 citizens have returned from the diaspora to enlist. Many thousands of other Ukrainian volunteers have chosen to fight.

The emphasis on men also seems outdated. Nearly a quarter of the army’s work force are women, and the ratio of female soldiers in combat roles almost doubled from around 6 per cent in 2014, when war began with Russian-backed separatists in eastern Ukraine, to over 10 per cent in 2019. The Territorial Defence Units, civilian reserves that signed up tens of thousands of new recruits during the first week of the present Russian attack, assign women and men the same sets of duties. From the invasion’s early days, women have played a significant role in civilian resistance as well, in some cases by literally standing in the way of Russian troops. Facilitating the evacuation of women and children while making men stay behind against their will seems unnecessary. 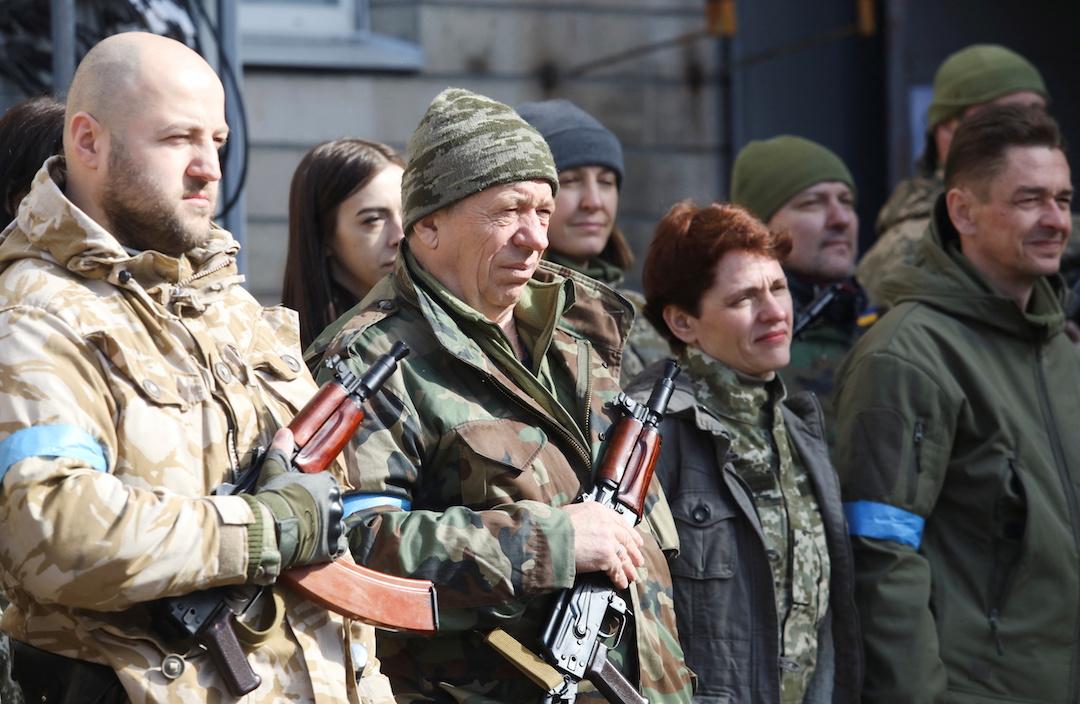 The EU’s guidance on border checks suggests waiving restrictions on taking pets across the border so that refugees do not have to choose between seeking safety and leaving beloved cats or dogs behind. In contrast, due to Kyiv’s travel ban for men, many Ukrainian families have faced the agonising choice between finding refuge and splitting up. Some affected families postpone this decision and remain in harm’s way.

For people who have to make such quick, consequential decisions, the ins and outs of travel bans and mobilisation require more transparent communication by the army. Whether and under what circumstances men can be involuntarily enlisted remains the subject of rumour. For instance, in the western border town of Uzhgorod, stories circulate that recruiters are seeking out single men staying at hotels. At a press conference on 15 March, the army’s chief recruiter had to deny accusations that internally displaced men were targeted more often than locals. Even if one has sorted out the rules, the soldiers operating some fifteen military checkpoints now dotting the road from Kyiv to the western border may not agree with one’s interpretation. A Kyiv man who drove his family to safety reported that every checkpoint not only creates its own traffic jam, but also comes with the fear of ending up on a conscription list.

These dynamics create new vulnerabilities. In the few cases where men have been caught trying to buy their way out of Ukraine, the bribes reached $2,100, about five times the average monthly pay in the country. Those who did not get caught likely paid a higher price, meaning that the poorest men may be the most vulnerable to dubious smuggling schemes. Those who left the most dangerous cities for the relative safety of western Ukraine may lie low, hoping to avoid conscription. Amid the swelling numbers of internally displaced people, these men will struggle to find work and housing. One NGO worker who helps those displaced to small towns and villages in the western Ivano-Frankivsk region observed that internally displaced men who cannot leave the country but are not subject to mobilisation often face hostility from locals who perceive them as draft dodgers.

For the women, children and elderly people allowed to leave, family separation will make it harder to start from scratch in the receiving country (although it will also help ensure they have a strong incentive to return). The separated families will need to cover living expenses in two locations, while refugee mothers will have to shoulder child care responsibilities and earn an income by themselves. On the journey to refuge, separated families are in greater peril of being targeted by thieves and other predators, in part because they are perceived as “unprotected” by men. Women and children arriving in a foreign country with few assets and no social network may face dangers from human trafficking, exploitation and sexual violence. As the perils of travel through a war zone are so unpredictable, many people may opt for the known risk of staying in their homes in increasingly beleaguered cities. 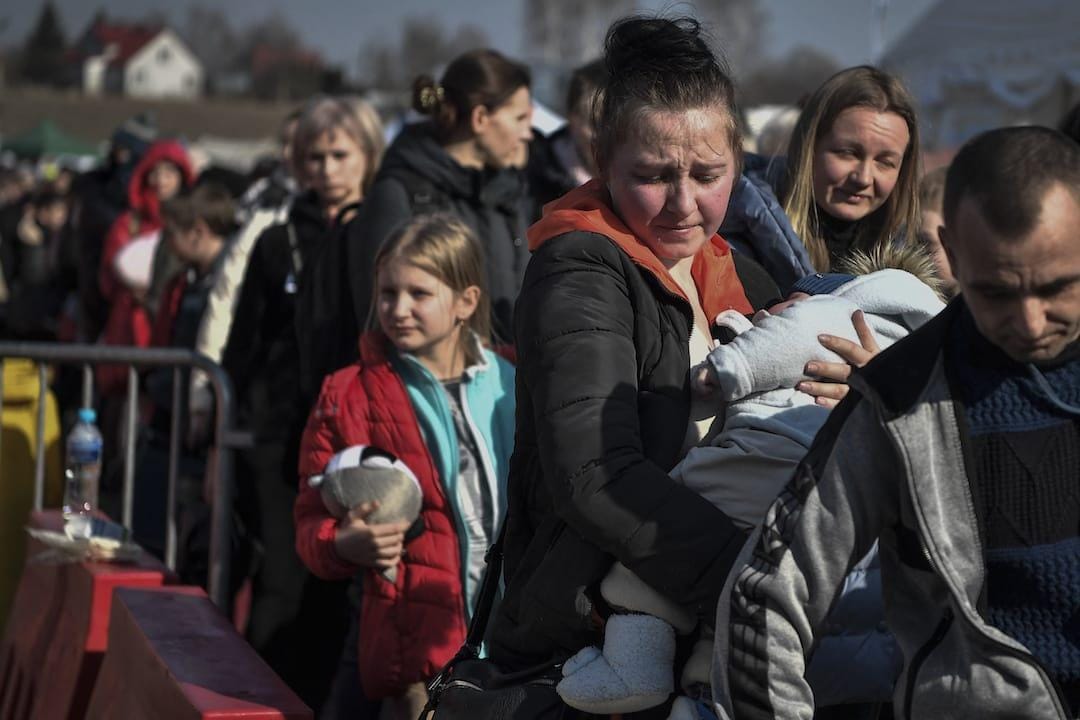 People stand as they wait to board buses for their further transportation after crossing from Ukraine into Poland at the Medyka border crossing on March 15, 2022. AFP / Louisa GOULIAMAKI

Various ethnic and social groups face very specific challenges as they seek refuge. Many Ukrainians of Roma origin, who often suffer discrimination in Ukraine, may have no documentation of identity or citizenship. Ukrainians and non-Ukrainians of colour have reported mistreatment from both Ukrainian authorities and those in host countries as they flee. LGBTQI people risk a less warm welcome in Poland and Hungary, the two largest receiving countries. Both the Polish and Hungarian governments have adopted homophobic and transphobic legislation. Trans women are forbidden to leave Ukraine if their documents identify them as men.

Kyiv should rescind its ban on travel for men of military age.

As the victim of an unprovoked assault, Ukraine has remained firmly on the right side of the moral narrative. Now, in the focus of the world’s attention as never before, it should guard this position. The overwhelming readiness of Ukrainian men and women to fight for their country to the best of their abilities should instil confidence in the government that it will not run out of committed defenders. Kyiv should rescind its ban on travel for men of military age. Men wanting to leave can make the country more resilient by remaining with their families and contributing to their safety and well-being. Kyiv should also do everything in its power to ensure that everyone fleeing receives equal treatment.

Europe was right to lower the barriers for Ukrainian refugees. As the war intensifies, granting safe passage to civilians who want to leave should become a matter of course. As Ukrainian policymakers reverse measures leading to involuntary family separations, their counterparts in host countries should ensure that everyone arriving from Ukraine receives adequate protection, with special care for those who might face specific risks. As more refugees come to EU countries and their financial needs mount, the welcome mat may begin to wear thin. Giving those who arrive now as good a start as possible is essential in preparing for the long haul.