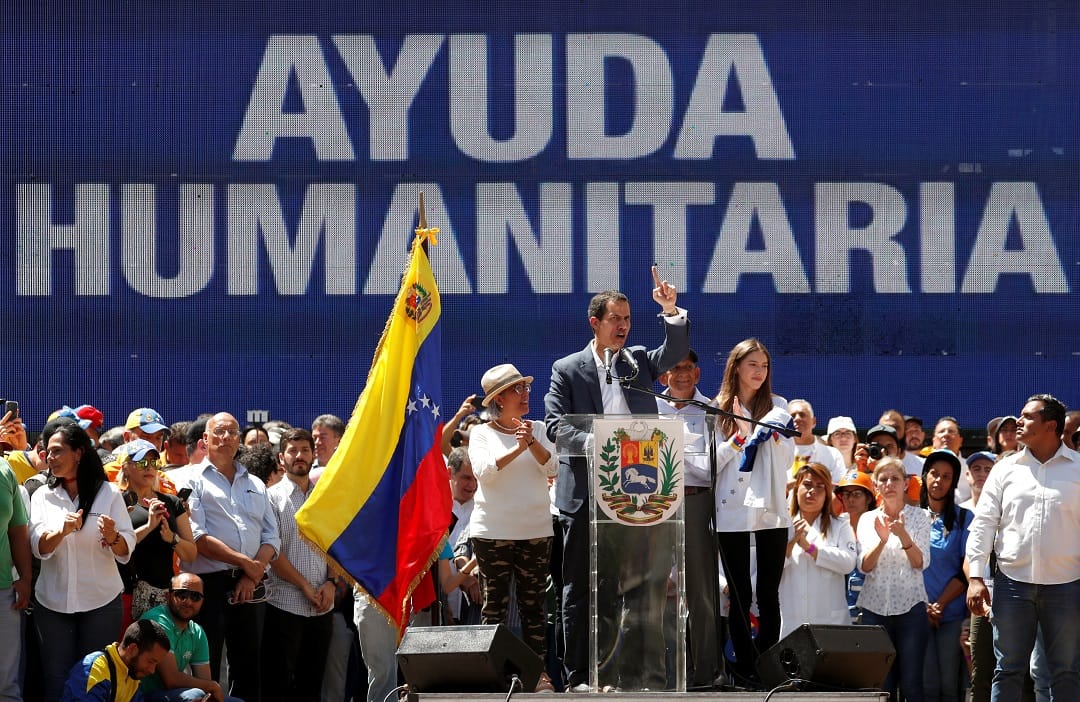 Venezuela’s constitutional crisis continues to unfold, with the opposition amassing food and medicine on the borders with the stated intent of turning the military against President Nicolás Maduro, who is refusing the aid. In this Q&A, our Senior Analyst for Venezuela Phil Gunson explains the standoff.

Venezuela’s opposition leader Juan Guaidó, recognised as the country’s interim president by dozens of countries including the U.S., has promised that on 23 February a “humanitarian avalanche”, comprising hundreds of thousands of volunteers and heavy transport vehicles, will begin importing and distributing food and medical aid that is accumulating at various points outside the country. An aid concert, featuring a number of high-profile Latin music stars, is planned for 22 February in the Colombian border town of Cúcuta, while the government has announced its own rival festival across the frontier. Pointing to the vigorous U.S. government campaign to force him out of power, President Nicolás Maduro has called the aid distribution plan a show devised by Washington to provide an excuse for a military intervention. He has vowed to stop it.

What is the conflict about?

President Maduro was sworn in for a second six-year term on 10 January, but the opposition, which says his 20 May 2018 election was a sham, regards him as a “usurper”. Along with the U.S., Canada, almost all member states of the EU and most of Latin America, it argues that the country’s constitution requires Guaidó, elected president of the opposition-controlled National Assembly just five days earlier, to assume the interim presidency pending fresh presidential elections. Under the article they invoke, these should be held within 30 days, though supporters of Guaidó argue that this timetable is neither feasible nor desirable, and that fair elections cannot be held so soon even though the constitution demands it.

In addition to the confrontation over the presidency, Venezuela is facing an increasingly severe social crisis brought on by a collapsing economy and exacerbated by financial and trade sanctions imposed by the U.S. In the past two years, as Latin America and the Caribbean in particular have begun to feel the impact of mass emigration of Venezuelans, the crisis has taken on a regional dimension. And since the Trump administration assumed a leadership role in the coalition of countries pushing for Maduro’s removal, it is inextricably entwined with global geopolitics. In a speech in Miami on 18 February dedicated to Venezuela, President Donald Trump depicted the struggle as a key part of a regional, even global effort to roll back socialism, evoking the Cold War. Omitting any reference to other countries in the coalition, he said the Venezuelan opposition would win “because the United States, a truly great nation, is behind you”.

Do Venezuelans need the aid?

Aid organisations in Venezuela say the country is suffering a “complex humanitarian emergency” due to severe shortages of food and medicine and the government’s refusal to adopt adequate measures to combat hunger and disease. The gross domestic product has fallen by around half since Maduro took office in 2013, according to some estimates, and annual inflation in 2018 was over one million per cent. The government does not publish statistics, but according to a regular survey by three local universities, more than nine out of ten Venezuelans earn too little to buy sufficient food. Most essential medicines are unobtainable and the health system has effectively broken down. For example, in a survey of 40 public hospitals released this month, 75 per cent had no morphine and over half had no insulin. Doctors calculated that over 1,500 patients had died in these hospitals alone in recent months for lack of medicines or equipment. Almost 80 died as a result of power cuts. Diseases such as malaria, measles and diphtheria – once nearly eradicated in Venezuela – are spreading out of control, and patients with chronic conditions such as heart disease, cancer and HIV/AIDS are mostly unable to obtain treatment.

Aid for the needy is a critical political symbol and source of power in Venezuela, where Maduro’s government claims to be carrying out a revolution that benefits the poor.

Even large-scale humanitarian aid, however, will not solve the crisis, which requires economic recovery and the reconstruction of health infrastructure and the country’s food and agriculture sector. Experts acknowledge that a few hundred tonnes of aid, were it to be allowed in, would still be just a drop in the bucket.

Will the government let the aid in?

No, at least it says it will not. The government admits that it has encountered economic difficulties, which it attributes to a decline in the price of oil, virtually the country’s only source of foreign exchange, and to U.S. sanctions, which intensified at the end of January when Washington moved to withhold the proceeds of oil purchases from the state oil corporation PDVSA. U.S. government figures show that oil sales to the country from Venezuela at the start of February were less than a quarter of what they were in the last week of January. Belatedly, the Maduro government has started to acknowledge the scale of public misery in Venezuela, announcing that its ally Russia is sending 300 tonnes of emergency aid (a claim about which President Putin said he knew nothing), and on 15 January signing an agreement with UNICEF and the UN Food and Agriculture Organization to assist with child nutrition.

At the same time, Maduro’s government says talk of a humanitarian crisis and plans for the February 23rd provision of humanitarian aid are merely pretexts for a U.S. military intervention, potentially supported by other South American countries such as Colombia. In reality, it seems to fear that the aid the opposition wants to bring in will result in a challenge to Maduro’s authority over the armed forces. The opposition has been explicit in this regard, voicing its hope – and expectation­ ­– that military officers will turn against the sitting president to pave the way for a political transition, starting by refusing to obey orders to block the aid’s entry. Any attempt to thwart the aid delivery, some opposition sources say, would qualify as a crime against humanity, regardless of whether violence was used.

For the Maduro government, the provision of aid also has acute political significance, which is another reason why it will resist the opposition’s efforts. Aid for the needy is a critical political symbol and source of power in Venezuela, where Maduro’s government claims to be carrying out a revolution that benefits the poor while its detractors insist that it uses welfare handouts to reinforce its hold over deprived barrios. The government distributes cheap but basic food rations to an estimated 7.3 million Venezuelan households via a program known as CLAP.

As tensions have risen, both sides have resorted to sabre-rattling. On 15 February, Maduro announced a “special plan for permanent deployment” (of the armed forces), “to defend our border against Colombian provocations”. Sources in Caracas downplay the threat, however, indicating that the government’s priority is to avoid a military flare-up at the border while controlling opposition protests through tough policing measures. The U.S., meanwhile, has refused to rule out military action, repeating that “all options are on the table”, while insisting that Maduro should leave office immediately. At a meeting in Miami on 20 February, the commander of the Colombian Armed Forces, General Luis Navarro, and the head of U.S. Southern Command, General Craig Faller, jointly called on their Venezuelan counterparts to “do the right thing” and let the aid through.

Does the government’s argument stand up?

Under international law, governments must give consent to the distribution of food and medical supplies when a population’s survival is threatened, but only if the aid is of an exclusively humanitarian and impartial nature. This aid operation, however, is primarily political, in that it is intended to undermine Maduro and bring about a change of government. “Aid that sits on the border while US officials taunt the regime is there for political showmanship, not humanitarian aims”, tweeted Jeremy Konyndyk, the former U.S. foreign disaster assistance chief. In private, some of those behind the “humanitarian avalanche” admit that the relief of suffering is a secondary consideration.

One possible outcome would see some of the aid gaining entry to Venezuela at the same time as Caracas claims that it has successfully resisted an attempt at foreign intervention.

This matter is of great concern to humanitarian organisations that have been working inside Venezuela over recent years to bring in and distribute food and medicines. They fear that the government may target their operations as a result. On 15 February, for example, police took the unusual step of raiding the offices of the private charity Manos Amigas por la Vida (Fundación Mavid), seizing medicines and other supplies intended for HIV/AIDS patients in an operation that some feared may be a sign of things to come. They also arrested some of the staff. The police later announced that the charity had been found to be providing its clients with expired medicines.

That said, the humanitarian emergency the government denies is all too real. It is the single biggest factor forcing millions of Venezuelans to flee the country. According to the latest figures from the UN High Commissioner for Refugees, at least 3.4 million people – more than a tenth of the population – now live abroad. Most have fled in the past two years.

What is likely to happen?

Juan Guaidó has declared that the aid cannot be stopped, but many observers doubt that much will get across the border on the declared date of 23 February. Most attention is focused on the border near Cúcuta. Hundreds of tonnes of U.S.-funded aid have already been stockpiled there, ready to be taken into Venezuela. But the Venezuelan government has deployed troops and police to stop it and has even blocked a new, and so far unused, multi-lane cross-border bridge with shipping containers and part of a tanker truck. There are also doubts as to whether the opposition will be able to gather a large enough rally on its side of the border to force the authorities to accept the aid consignments. Border towns such as San Antonio de Táchira and Ureña are relatively small, and road access from the rest of the country to the border would be fairly easy for Venezuelan security forces to regulate.

Other potential crossing points include the far south east of the country on the Brazilian border, and the northern coast, the likely destination of aid stored on the Dutch Antillean island of Curaçao or heading from Puerto Rico. In recent days, however, Maduro has ordered a temporary closure of both routes of entry, and indicated that he might do the same on the Colombian border. Despite Maduro’s military manoeuvres, as well as the Trump administration’s pointed refusal to rule out the eventual use of force, both sides seem keen to avoid a military conflict, at least for now. One possible outcome would see some of the aid gaining entry to Venezuela at the same time as Caracas claims that it has successfully resisted an attempt at foreign intervention. But if the aid ploy fails to prompt the Venezuelan armed forces to withdraw support from Maduro, the opposition hopes that the oil sanctions, which are already beginning to nip, will bite hard enough to persuade the president that his time is up.