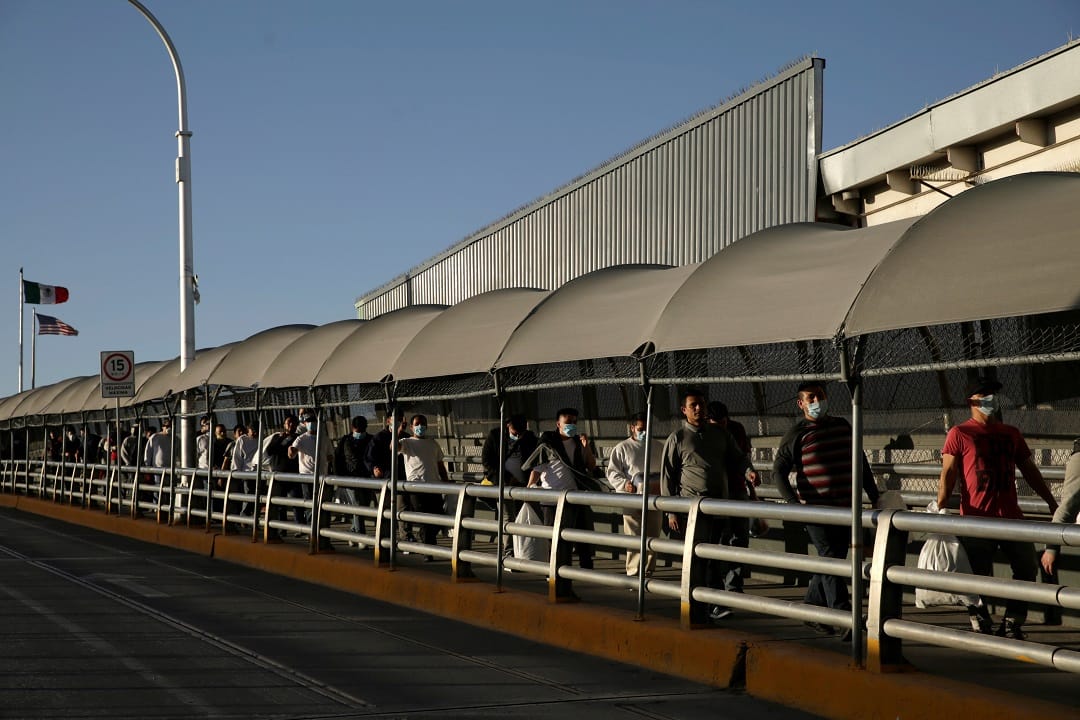 Under-resourced health systems and poverty, along with the grassroots power of criminal groups and gangs, make Central American countries highly vulnerable to COVID-19 and the knock-on effects of national lockdowns on people’s livelihoods and security. But it is the region’s relentless migratory flows, whether legal or undocumented, forced or voluntary, that are shaping up to be the weakest links in virus prevention campaigns. Above all, deportations from the U.S. and Mexico now threaten to become leading vectors of southward transmission and could spark worsening unrest among fearful residents. Central American governments should respond by urging the U.S. either to pause deportations or to reform how they are handled, ensuring that strict health checks are in place before any more migrants are sent back.

While all three northern Central American countries – El Salvador, Guatemala and Honduras – have banned passenger air and land travel in and out of their countries, deportations have not stopped. U.S. flights carrying deportees to Guatemala, Honduras and El Salvador have proceeded on and off over the past few weeks, though they are now on hold in Guatemala at its government’s request. Meanwhile, deportations overland from Mexico have continued unabated. In total, the U.S. and Mexico have returned at least 6,500 Guatemalans, 5,000 Hondurans and 1,600 Salvadorans between March and mid-April, according to available figures.

Virus testing by U.S. and Mexican migration authorities before deportation, however, has been far from being reliable or robust. Although mass testing in South Korea and elsewhere has consistently shown that most carriers of COVID-19 are asymptomatic, the U.S. Centers for Disease Control and Prevention have been testing only those deportees who report symptoms, mainly fever (efforts will reportedly now be made to test up to 2,000 migrants in custody per month). The Guatemalan government has already confirmed that 100 deportees have tested positive for the virus, one fifth of the entire tally of recorded cases in the country. But the real total could be higher, as Guatemala only started widespread testing of returning migrants, and setting up ad hoc reception centres, after a 26 March deportation flight arrived bearing various infected passengers. Before that, migrants had been invited to observe a two-week voluntary quarantine. Mexico has identified at least sixteen Central American migrants with coronavirus in its northern Tamaulipas department, fourteen of them infected by one migrant previously deported from Houston, Texas.

Immigration and Customs Enforcement (ICE) detention facilities in the U.S., which host more than 32,000 convicted or illegal migrants, are turning into a hot-spot for COVID-19, intensifying concerns as to the risk of contagion via deportees. At least 360 migrants held by ICE of only 425 who had access to a test turned out to have been infected, while at least 9,000 Department of Homeland Security (DHS) officials have been sidelined from their official duties after testing positive or having been exposed to the virus. The Mexican government has been slow to react to the pandemic and has taken virtually no preventive measures in its migrant detention centres, according to UN officials and humanitarian workers to whom Crisis Group spoke.

The squalid conditions, coupled with fear of exposure to the virus, have already sparked mutinies in the U.S. and Mexico.

The squalid conditions, coupled with fear of exposure to the virus, have already sparked mutinies in the U.S. and Mexico, where a Guatemalan migrant died in a revolt at a migrant detention centre in Tenosique, Tabasco, at the end of March. After this episode, Mexican authorities started releasing most of the 6,000 migrants stranded in detention facilities, and even shut down the Tenosique facility. One humanitarian worker stated that most of these released migrants have been put on buses heading south, and are sometimes abandoned in the town of Tapachula on the southern Mexican border with Guatemala, a migration bottleneck. Authorities give them no shelter and have blocked access to public spaces where migrants used to gather. In some cases, Mexican officials reportedly have even incited them to return to their home countries via illegal crossings often employed by criminal traffickers. Meanwhile, representatives of shelters run by non-governmental organisations told Crisis Group that, due to the pandemic, they have scaled down their operations and are unable to receive more incoming migrants.

Guatemalan President Alejandro Giammattei has asserted that, alongside deportees and detained migrants, higher numbers of Central Americans are independently heading back to their homelands overland from the U.S. and through Mexico, using illegal crossings. UN officials consulted by Crisis Group have identified at least 700 Central Americans trying to return to their countries through various blind spots in Guatemala’s borders with Mexico, El Salvador and Honduras in the past two weeks alone.

U.S. determination to press ahead with deportations of Central American migrants and refugees despite the pandemic follows years of tightening border and migration policies, notably under President Donald Trump. The draconian migration policy adopted by the Trump administration, to which Mexico signed up fearing tariff reprisals, has aimed above all to stem rising flows of migrants out of Guatemala, Honduras and El Salvador, which together account for around 8 per cent of the total legal immigrant population in the U.S., and 15 per cent of the illegal, according to Migration Policy Institute estimates.

Migration toward the U.S. has long been an escape valve for hundreds of thousands of Central Americans fleeing grim living conditions and chronic insecurity. But over the past couple of years, the lethal mix of gang-related violence, economic stagnation and prolonged, climate change-induced drought has spurred a sharp increase in northward migration, urged along further by concern that the Trump administration will completely prohibit entry into the U.S. U.S. authorities apprehended more than 600,000 Central American migrants – or almost 2 per cent of the region’s entire population – at the southern border with Mexico between October 2018 and September 2019, according to U.S. Customs and Border Protection figures. Between 27 and 48 of the Guatemalan, Honduran and Salvadoran interviewees in a recent survey by the Inter-American Development Bank cited violence or insecurity as their main reason for making the journey.

In response, the Trump administration has increased border patrols, established stricter requirements for obtaining asylum or visas, and put pressure on Mexico and Central American countries to process asylum requests filed in the U.S. (through so-called Migrant Protection Protocols and the Asylum Cooperation Agreements). According to U.S. Secretary of State Mike Pompeo, these measures have helped reduce the number of Central Americans arriving at the U.S. southern border by 70 per cent since numbers peaked in May 2019. Mexico’s deployment of the National Guard to its southern border with Guatemala in June 2019 also curbed the flow northward. In 2019 alone, the U.S. and Mexico deported more than 250,000 Central Americans, according to figures from the International Organization for Migration.

Since the COVID-19 outbreak began, the Trump administration has redoubled its efforts to impede would-be migrants from reaching the U.S.

Since the COVID-19 outbreak began, the Trump administration has redoubled its efforts to impede would-be migrants from reaching the U.S. On 21 March, the president allowed Department of Homeland Security (DHS) officials to immediately expel illegal migrants found at the border. As a result, they have turned back at least 10,000 migrants to Mexico in a matter of weeks. On 22 April, Trump went further, signing an executive order halting immigration for green card seekers for at least 60 days.

Tough measures imposed by the Guatemalan, Honduran and Salvadoran governments to contain the pandemic, including border shutdowns, curfews and restrictions on internal movement, have further complicated the journey north. These measures have “only raised the cost of bribes officials expect from those who can afford it”, said a humanitarian worker in a shelter in southern Mexico. “And they’ve pushed those who can’t to more dangerous and remote trails, where they risk getting extorted or kidnapped”.

The Need for a Coordinated Response

Poor coordination among the U.S., Mexico, Central American states and UN agencies, as well as the lack of proper health checks in U.S. and Mexico migrant facilities, could have dire effects across a region ill prepared to combat the pandemic. None of Guatemala, Honduras or El Salvador has ever managed to provide returnees with proper resettlement and protection services, and all three are now channelling most available resources toward strengthening health systems. Undetected COVID-19 cases among deportees could spread the virus in the poor and often violent areas which they left and to which they often return. This risk is already triggering unease, violence and stigmatisation of returnees. In one recent episode in Quetzaltenango, Guatemala, locals first threatened to set fire to a centre designed to host some 80 deportees, and then set off in hot pursuit of several who had reportedly tried to escape.

Ideally, the U.S. and Mexico should immediately pause all deportations.

Ideally, the U.S. and Mexico should immediately pause all deportations. Both countries, however, are likely to keep toughening law enforcement, including deportations, to curb migration north, especially in view of Trump’s re-election bid. Therefore, the urgent priority for Central American countries should be to negotiate with the U.S. and Mexico a safer, more orderly and coordinated return process, including far stricter health measures in U.S. and Mexico migrant detention facilities, stepped-up testing and possibly a quarantine period prior to deportation. In parallel, the region’s governments should seek UN agencies’ and humanitarian organisations’ assistance in setting up decent reception centres and improving protocols that ensure fair treatment and resettlement of returnees. They should also maintain channels of dialogue with communities that receive returning migrants, ensuring that they follow strict quarantine rules so as to minimise the risk of violent backlash. Continuing to deport migrants without taking these steps and in disregard of the potential for contagion is a recipe for turmoil.