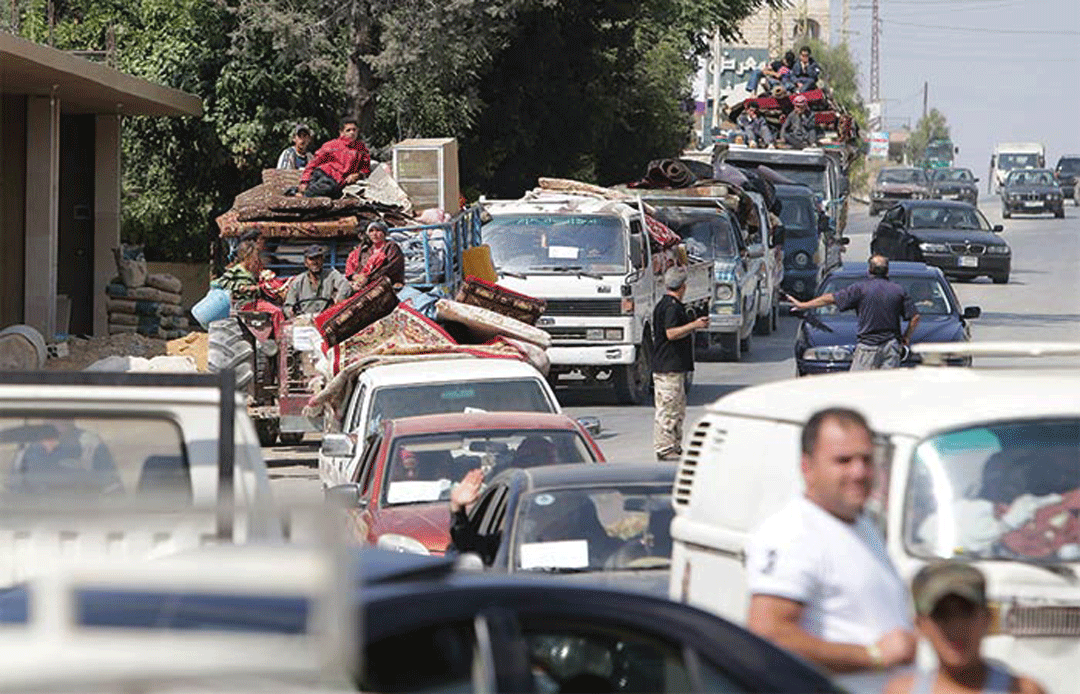 Lebanon’s Resilience under the Weight of Syria’s War

Lebanon and Syria have always been closely intertwined, from the days when they were both provinces of the Ottoman Empire, to a shared experience of French colonial rule, to the 1975-1990 civil war and post-war period during which Syria claimed a big brother role.

Lebanon has now failed to elect a new president for a year. Who are the actors and why can’t they agree?

Since President Michel Suleiman stepped down in May 2014, parliament has convened more than 20 times without electing a new president, a post that holds important political and symbolic power. The backroom dealing that has become the Lebanese political norm has failed to yield a successor.

According to the traditional sectarian formula that balances Lebanese politics, the president must be a Maronite Christian. But there is a stalemate between the two main Christian groups. One is the Free Patriotic Movement, led by Michel Aoun, 80, a former president and army general. The other is the Lebanese Forces, led by Samir Geagea, 62, a controversial former war commander.

Two pan-Lebanese groupings are aligned with these two men: behind Aoun stands what is known as the “March 8 alliance”, which is backed by Lebanon’s powerful Shiite Hizbollah party and the Syrian regime in Damascus. Geagea meanwhile is part of the “March 14 alliance”, which viscerally opposes the Syrian regime and Hizbollah; this grouping is allied to the Sunni Future Movement led by Saad Hariri – who accuses Syria of being behind the February 2005 assassination of his father, former Prime Minister Rafic Hariri. The two coalitions derive their names from huge rallies each camp organised after the assassination, the former on 8 March to support Syria and the latter on 14 March to protest Damascus’ role in Lebanon and call for the withdrawal of its troops then stationed in the country.

How is Lebanon dealing with the political impasse and what are the likely end scenarios?

There are three possible scenarios to end the impasse on the presidency, although all three seem unlikely to materialise in the immediate future. First, deep polarisation within the Christian community makes it hard to believe that the inter-Christian dialogue will yield an agreement. Second, it is unrealistic to expect sufficient outside pressure for compromise by Lebanon’s main two backers, Saudi Arabia and Iran, at a time where the two are intensifying their proxy wars regionwide. Finally, the situation in Lebanon is not ripe for the selection of a consensual president, one who would be equidistant from both the anti-Syrian 14 March alliance and the pro-Syrian 8 March alliance.

Who are the likely candidates and how are their backers influencing the election process?

While there are no official candidates, both Aoun and Geagea have presidential ambitions. However, both are very polarising figures among both Lebanese Christians and also Lebanon’s society in general. Aoun and Geagea’s main domestic backers, respectively Shiite Hizbollah and the Sunni Future Movement, are themselves too deeply divided to agree on a president, so to save face they have put the onus on the Christians to agree among themselves.

The Lebanese political class seems to believe that the wait-and-see approach is their best bet to fend off the war in Syria and other threats from a volatile region.But the result is that all sides are avoiding taking responsibility, or undermining democratic processes. This has also resulted in the current prolonged decision-making paralysis that is further undermining Lebanese state institutions.

Is the Syria war likely to spread to Lebanon?

Concerns that the Syria war can drag down neighbouring Lebanon remain real. Lebanon has always been to some extent the backyard of its bigger neighbour, and similar sectarian and geopolitical faultlines make it easy for conflict to jump the border. Hizbollah has taken on an ever-growing military role in Syria since the end of 2012. In 2013 and 2014, several suicide attacks by Lebanese Sunni jihadi extremists targeted Shiite neighbourhoods, Hizbollah targets and the Iranian embassy. There have also been sectarian armed clashes in the north Lebanese port city of Tripoli, the southern port city of Saida (Sidon), and elsewhere.

Yet Lebanon remains resilient, despite the large numbers of Syrian refugees, the regional turmoil, current tensions over the presidency, political paralysis, deep crises over the past decade, and the fact that its institutions are barely functioning.

This precarious calm can be attributed to three main factors. First, regional conflicts are being played out by violent means much less in Lebanon. Instead, proxy wars have shifted toward Syria, Iraq, Yemen and Libya. Second, Hizbollah’s locally superior military force discourages its foes from challenging it. Finally, bitter memories of the 1975-1990 civil war still deter important segments of Lebanese society from going down this road again.

What is Lebanon doing about its huge number of Syrian refugees?

To date, there are nearly 1.2 million refugees in Lebanon – around 20 per cent of its estimated population of five to six million people, which would be a huge burden for any country, let alone one with Lebanon’s problems. The authorities and relevant institutions paid little heed to the flow of refugees from its onset, which allowed the situation to fester. And to a large extent, Lebanon is still in denial about the medium- to long-term nature of its Syrian refugee crisis.

Today, Syrian refugees are spread around more than 1,500 locations including informal refugee camps, towns and cities. Many have little or no access to basic necessities like food, water, shelter and clothing or medicine. The influx of refugees has also created tensions with host communities. A growing number are suffering human rights abuses.

The economic burden is another important issue. In the past, the vast majority of Syrians in Lebanon worked in unskilled jobs such as construction and agriculture. Today, with a broad range of Syrians having fled their homes, refugees are competing with wider segments of the Lebanese labour market and better skilled workers, which in turn is creating new tensions.

Since there is no end in sight to the refugee crisis, the Lebanese government, with the help of regional and international partners, would be wise to adopt a policy that both deflates pressures and ensures respect of refugees’ dignity and rights. As laid out in Crisis Group’s May 2013 report, Too Close for Comfort: Syrians in Lebanon, the presence of Syrian refugees is exacerbating existing political, social and communal tensions and exposing Lebanon’s own dysfunction.

How has life changed for ordinary Lebanese since the start of the Syria war?

The Syrian war has affected virtually all aspects of daily life in Lebanon. It is the major topic of conversation. Coffee shops buzz with a mix of Syrian and Lebanese dialects. TV talk-show discussions over Syria sometimes have come to physical blows on air. Even more cars now clog the streets of Lebanon’s cities, and Syrians, mostly women and children, have joined the ranks of beggars on pavements and at traffic lights.

Since the war closed Lebanon’s borders with Syria, farmers have lost their primary export market and merchants have seen their only overland trade route cut. As a result, the price of many goods imported or smuggled from Syria has increased. The greater demand sparked by refugees has added to inflationary pressures. The enormous influx puts additional strain on a state that was already struggling to fulfil its basic duties. Hospitals and other health facilities are overstretched, power blackouts have increased in some areas, and water supplies have decreased.

Several commercial air carriers changed their routes, flying over Egypt instead of directly towards Lebanon over Syria, extending usual flight times by one hour.

However, the Lebanese themselves remain inventive. Hardened by endless crises over four decades, they have lowered their expectations of the state. For power, they often resort to alternatives such as privately-owned generators that distribute power to households and businesses, or privately-owned cisterns that sell tap water. The Lebanese diaspora numbers more than the resident population, and its generosity has made Lebanon one of the largest remittance-receiving countries in the world. This support helps many families survive, and by extension is critical for the country as a whole.

What is the impact in Lebanon of Hizbollah’s role as an armed force fighting in Syria?

As Crisis Group argued in its May 2014 report, Lebanon’s Hizbollah Turns Eastward to Syria, Lebanese society is deeply polarised over Hizbollah’s military involvement there. Many segments of the Sunni community, previously supportive of Hizbollah’s struggle against Israel, have grown antagonistic toward the Shiite group. There is scepticism among some Shiites about Hizbollah’s external engagement, but it is rarely heard outside the community.

At the same time, Syria, Iran and Hizbollah have succeeded in portraying Sunni extremism, and the Islamic State in particular, as an existential threat for Lebanese beyond the Shiite community. There are some Lebanese Sunni voices who now believe that Hizbollah’s fight inside Syria prevents the “black threat”, named for the colour of the Islamic State’s flag, from penetrating into Lebanon. Shiites are closing ranks behind the party despite the heavy death toll the community is suffering in Syria. Tellingly, fighters killed there are now publicly celebrated in ceremonies and posters in Shiite villages, enjoying the same treatment that was once afforded to fighters against Israel. Of course, news and videos of the Islamic State’s brutality only reinforce support for Hizbollah.

For now, the Shiite party remains hegemonic, particularly in cities in the northeast bordering Syria. The fighting on both sides of the border in that area – in the Qalamoun and rugged Arsal mountains – has spilled over only to adjacent areas in the Bekaa Valley, where military deployments are widespread and sectarian tensions palpable. However, in other parts of the country, battles across the borders remain largely invisible, and the population is rarely exposed to any direct consequences.

Has Lebanon’s role as stage for the region’s proxy wars really ended? How is Saudi-Iranian rivalry manifesting itself?

Saudi-Iranian rivalry peaked in Lebanon between 2005 and 2011, when Riyadh and Tehran invested heavily in building up their Lebanese allies, the Future Movement and Hizbollah respectively. In May 2008, Hizbollah took control of parts of Beirut considered strongholds of the Future Movement, even forcing the Saudi ambassador to flee by boat. The Shiite party more recently took this to the regional level too, with its leader openly criticising the Saudi royal family and its military operations in Yemen.

Despite the heightened regional rivalry, Saudi Arabia seems to have calculated that it would need too much training, time and money to challenge Hizbollah militarily in Lebanon, making this an unrealistic scenario.

At the same time, at the local level and motivated by their common fear of Sunni extremists and the possibility that intra-Lebanese conflicts might spin out of control,Hizbollah and the Future Movement have increased their cooperation. Despite their deep political differences, have even agreed on a security plan to contain the worsening security situation.

For now, at least, there appears to be an indirect convergence of interest between Riyadh and Teheran and their respective Lebanese allies to preserve the country’s status quo. Neither Lebanon nor its backers can afford a new open confrontation in a region already deep in bloody conflict.