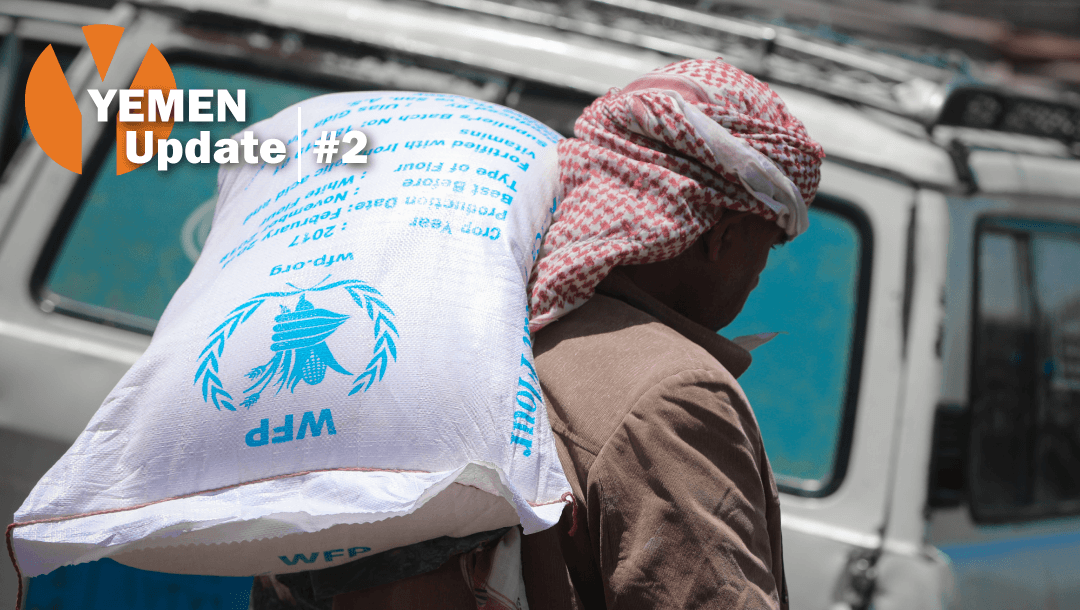 This is Crisis Group’s second weekly update published as part of our Yemen Campaign. Prefaced with a new introductory trendline – this week, fear of famine – it provides up-to-the minute insights into the four-year-old civil war and the world’s biggest humanitarian crisis.

For more than six months the primary focus for diplomats, policymakers and analysts working on Yemen has been the now-frozen offensive on the Red Sea port city of Hodeida. (You can read our analysis of why Hodeida is important here, and what was in the agreement here. The UN, which brokered the deal, has since struggled to turn the agreement into a reality. You can learn more about the barriers to implementation here.) Even if the Stockholm Agreement can be made to stick, fighting is likely to continue in other frontline areas while tensions also remain high among ostensibly allied pro-government Yemeni groups across the south and in Taiz city.

A deal brokered by the UN in December between the government of Abed-Rabbo Mansour Hadi and Ansar Allah, better known as the Huthis, was agreed largely on humanitarian grounds. The Stockholm Agreement was a success in that it prevented a battle for the Red Sea port and city of Hodeida that would likely have sparked a major famine. But six weeks on, the ceasefire agreed in Sweden is still on shaky ground and aid agencies are warning that unless they can access a wheat storage and milling plant on the outskirts of Hodeida they will struggle to ward off mass starvation.

A fire, which the United Arab Emirates (UAE) alleges was caused by a Huthi mortar, damaged two silos at Red Sea Mills, a vital wheat storage, milling and distribution hub for the World Food Programme (WFP) on Hodeida’s outskirts, on 24 January. Any disruption at the facility endangers around a quarter of all WFP wheat supplies in Yemen, as well as milling capacity for further food assistance. It comes just as the organisation attempts to double what is already the world’s largest food aid program. As many as 14 million people have so little to eat that they are “one step away from starvation”, the WFP says; it aims to deliver food to just that number this year.

The WFP has not been able to enter or directly assess damage to the storage facility, which has been on the edge of one of the main frontlines around Hodeida since fighting broke out nearby in September. The Huthis have mined the area around the mill, cutting off road access from the city. They claim that they have begun the demining process, but that engineers doing this work have come under fire from nearby UAE-backed forces; on 29 January, a deminer working near Red Sea Mills was killed by what the Huthis claim was gunfire from coalition-controlled territory but may in fact have been unexploded ordnance. The coalition, for its part, says it was prepared to allow an aid convoy to pass on that date, but could not because the Huthis failed to demine portions of the main highway to Sanaa they control at Hodeida.

UN officials worry that they have no way of knowing how much wheat is still in storage and how much of it is still consumable, while lack of access has made food import and distribution exceptionally difficult. Although Aden port in the south has the capacity to process more food imports than it does at present, logistical and security constraints along with insurance costs for goods being shipped into Yemen have caused so many challenges that a number of traders and humanitarian organisations have been transporting goods into Yemen via Salala port in western Oman. This route has its own problems, however; the UN is trying to work out an arrangement on cross-border transfers that satisfies Muscat, the Yemeni government and the Saudi-led coalition.

Bottom Line: Assuming the ceasefire holds and a fight for Hodeida does not take place, current logistical bottlenecks could still tip Yemen into famine, as humanitarian agencies are unwilling to be drawn deeper into the conflict’s murky politics. Indeed, even if progress is made on opening the Red Sea Mills access road and in Aden, the spectre of famine will loom large for some time to come. This is why moving beyond a humanitarian-inspired Hodeida ceasefire toward a negotiated end of the war should be the international community’s top priority in Yemen.

Martin Griffiths, the UN special envoy to Yemen, and Patrick Cammaert, the Dutch general who has been overseeing efforts to implement the ceasefire and redeployments in Hodeida, continued shuttling between the Huthis, government of Yemen and Riyadh in an attempt to get buy-in for the redeployment of Huthi and rival forces from Hodeida port and city, as the parties continued to test the limits of a fragile ceasefire.

As noted, the UAE blamed the Red Sea Mills fire on a Huthi mortar, and claims the Huthis have now violated the ceasefire more than a thousand times, killing 71 and injuring hundreds. For their part, the Huthis allege that the other side has committed a similar number of breaches; on 30 January, they reported that the Saudi-led coalition had launched airstrikes in Hodeida governorate in what would constitute a clear breach of the ceasefire. With a full-scale monitoring mission of the kind the UN Security Council approved earlier in January still not in place, it is impossible to verify the various claims and counter-claims.

The UAE confirmed the airstrikes, for example, but said that they hit targets outside Hodeida governorate. UAE Minister of State for Foreign Affairs Anwar Gargash described this as using “calibrated force” to push the Huthis into fulfilling their part of the Stockholm Agreement. More broadly, UAE officials – who are now more optimistic about prospects for political progress in 2019 – nonetheless warn that they will return to hostilities if the Huthis continue to block implementation.

On 31 January, the UN announced the appointment of a Danish general, Michael Anker Lollesgaard, who will assume control of the newly-constituted UN Mission to Support the Hodeida Agreement (UNMHA). Lollesgaard replaces Patrick Cammaert, a Dutch former Marine general who led the UN advance team tasked with assessing the situation in Hodeida, planning for the deployment of a full monitoring mission and chairing the joint Huthi-Yemeni government Redeployment Coordination Committee established to implement the Hodeida aspects of the Stockholm Agreement. Lollesgaard is certain to face the same challenges as his predecessor: ceasefire violations, differences in interpreting the Stockholm Agreement and obstruction by all sides in implementation. He may also struggle to overcome some of the internal UN tussles that have reportedly plagued attempts to turn the Stockholm Agreement into a reality on the ground.

But most importantly, he will need to overcome the trust deficit that is a significant barrier to progress. The Huthis fear that by demining the Sanaa-Hodeida highway they will make themselves vulnerable to coalition attack using airstrikes and armoured vehicles, and that once they have redeployed key forces they may gradually lose control of Hodeida and the Red Sea ports to their coalition-backed opponents. The coalition in turn worries that the Huthis are attempting a bait-and-switch: redeploying front-line fighters and replacing them with security forces that are little different in real terms, maintaining the Huthi stranglehold on the Red Sea ports and Hodeida city, and then using the eventual presence of UN monitors to prevent any coalition attack.

Beyond Hodeida, the past week has seen a sudden increase in violence in Hajja governorate, which sits on the western edge of the Saudi-Yemeni border, and is the site of a key frontline around another port, Midi. The Huthis had agreed on a truce with the local Al-Hajour tribe at the beginning of the war, but started moving aggressively into their territory in mid-January. The tribe responded by detaining Huthi loyalists, spurring fierce clashes and shelling, later augmented by coalition airstrikes. This continued a pattern seen elsewhere since December, with the Huthis and coalition-backed forces moving to consolidate territory or retake lost ground in strategic areas at or near frontlines. Over the past month the Huthis and rival forces have been involved in attacks and counter-offensives in Haradh, Midi and now Kushar (in Hajja governorate), Kitaf and Buqa (in Saada), Khab wa Sha’af and Astor (in Al-Jawf), Nihm (north east of Sanaa), Sirwa (in western Mareb), and Damt (in northern Al-Dhale governorate).

Yemen is also likely to feature prominently in discussions at a U.S.-led meeting on the Middle East in Warsaw in February that will focus heavily on Iran.

Griffiths meanwhile has said that he hopes to announce another round of direct talks between the Huthis and the Hadi government “soon”, projecting confidence that the current deadlock can be broken. Diplomats see a 30 January prisoner swap facilitated by the International Committee of the Red Cross – of a Saudi soldier for seven Huthi fighters – as a sign that compromise and deal making are possible.

Bottom Line: As the Huthis, rival Yemeni forces and the coalition continue to jostle for position on the ground, the likelihood increases that the Hodeida ceasefire will collapse, not just due to its non-implementation but also to escalations elsewhere. This makes Hodeida implementation crucial, as it could create momentum for a more durable nationwide ceasefire to take hold and peace talks to commence.

The UN Security Council’s Yemen Sanctions Committee met on 18 January to discuss the latest Panel of Experts report, which although not public has been circulated widely. The report documents transfers of Iranian fuel to the Huthis, the manufacture and deployment of long-range drones by the Huthis in Yemen and the transfer by unnamed foreign experts of ballistic missile capabilities. Some UN member states anticipate that the U.S. will once again single out Iran during negotiations on the Security Council’s Yemen sanctions regime (due to be renewed by 28 February). Last year’s sanctions renewal negotiations included a Russian veto of a UK-sponsored draft resolution because of disagreements over Iran-related language; the text included a reference to the panel’s conclusion that Iran was in non-compliance with the arms embargo established under Resolution 2216 (2015). The Security Council eventually adopted a Russian-drafted text that did not include any references to Iran.

Yemen is also likely to feature prominently in discussions at a U.S.-led meeting on the Middle East in Warsaw in February that will focus heavily on Iran. It will be followed by a meeting of the so-called “Quad” on Yemen, comprising the U.S., UK, Saudi Arabia and the UAE. The UK reportedly agreed to send its foreign secretary to the Warsaw event only if the organisers promised to put Yemen on the agenda as well.

Bottom Line: A last-minute U.S. intervention pushed the Stockholm Agreement over the finish line in December. Yet the new focus on finding a way to end Yemen’s civil war, evident in Washington in late 2018, risks being lost amid the Trump administration’s fixation on pressuring Iran. Without James Mattis, whose steadying hand as secretary of defence helped bring about the agreement and the resulting ceasefire around Hodeida, the risk that U.S. policymakers frame the Yemen war as simply another front in its campaign against Iran can only increase.