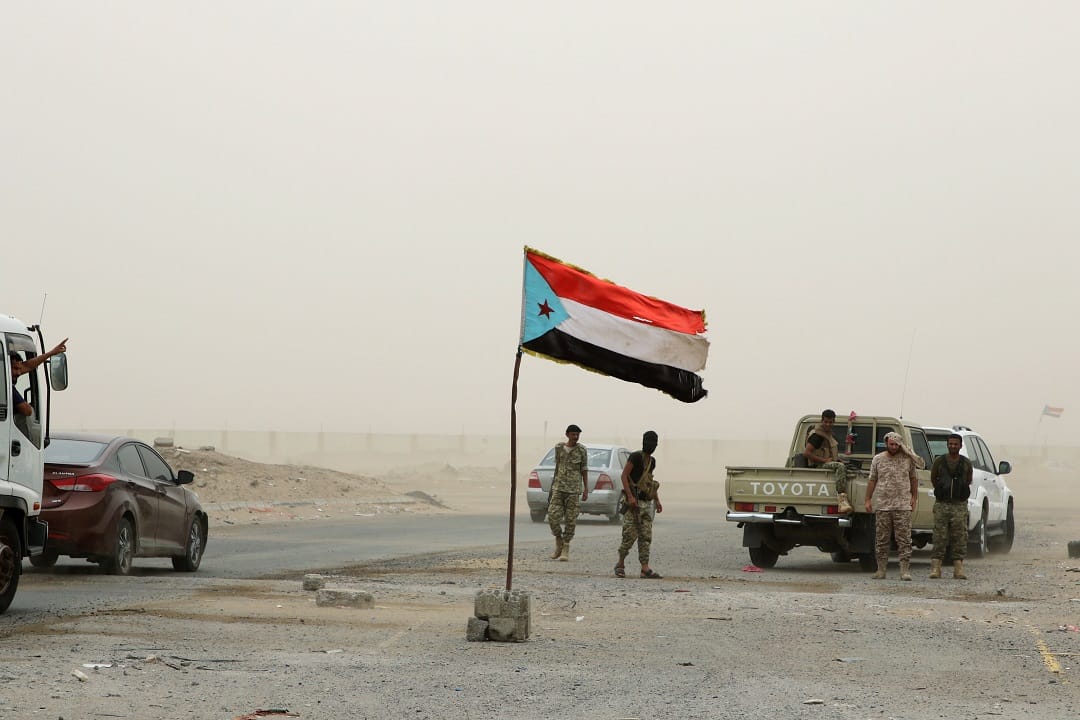 Fighting within the anti-Huthi front threatens to make an already multi-faceted conflict even more complex and intractable. Clashes in Aden reveal tensions within the Saudi-led coalition and highlight the pressing need to address Yemen’s “southern question” now rather than wait until a post-conflict political transition.

Clashes in the port city of Aden between secessionists and loyalists of the internationally recognised president, Abed Rabbo Mansour Hadi, threaten to tip southern Yemen into a civil war within a civil war. Such a conflict would deepen what is already the world’s worst humanitarian crisis and make a national political settlement harder to achieve. In the past, half-measures helped de-escalate simmering tensions in the south; today’s circumstances require robust diplomatic intervention from the UN, Saudi Arabia and the United Arab Emirates to avoid the worst and help forge a durable solution.

The fighting broke out on 7 August during the funeral of Munir “Abu al-Yamama” al-Yafei. Al-Yafei was a leading commander of the Security Belts, a UAE-backed paramilitary grouping that has battled the Hadi government’s forces before, despite technically falling under its interior ministry’s command. He was killed by a missile that hit a parade ground in western Aden on 1 August. The Huthis claimed responsibility for the strike. But members of the Southern Transitional Council (STC), secessionists who see themselves as a southern government-in-waiting and claim control of the Security Belts, blamed it on Islah, Yemen’s main Sunni Islamist political party, which is sometimes described – not entirely accurately – as “Yemen’s Muslim Brotherhood”. STC media outlets speculate that Islah and the Huthis are conspiring to destabilise the south together, despite the fact that they are on opposite sides of the wider war.

STC officials further claim that while they respect Hadi’s legitimacy, Islah members, whom they describe as terrorists, have infiltrated Hadi-aligned military forces, including the Presidential Guard, as well as other government institutions. The Presidential Guard is stationed at the presidential palace, near the location of al-Yafei’s funeral. After reports of gunshots directed at the mourners, STC-aligned fighters and Guardsmen exchanged fire at the palace entrance and near the airport. The STC claims that eleven of its members were killed. By the early evening of 7 August, Aden residents reported that the fighting had subsided, giving rise to hopes of a ceasefire. But Hani bin Breik, the STC vice president who is widely seen as the Security Belts’ founder, called that night for the overthrow of what he described as the “terrorist” and “corrupt” government. Fighting erupted again on 8 August. It was ongoing at the time of publication after a failed Yemeni-Yemeni initiative to negotiate a truce.

STC-aligned forces have become the dominant power on the ground.

The parties have issued a welter of statements that may seem contradictory. Bin Breik reaffirmed the STC’s affiliation with the Saudi-led coalition, the force that intervened in Yemen’s civil war in 2015 to restore the president. Ahmed al-Maysari, the Hadi loyalist interior minister, claimed on 7 August that his forces had fended off a coup attempt and that the Saudi-led coalition continued to support the Hadi government. For their part, Mohammed al-Jaber, the Saudi ambassador to Yemen, and Anwar Gargash, the UAE minister of state for foreign affairs, each called for calm without expressing support for either side.

Aden’s convoluted situation reflects the internal politics of Yemen’s anti-Huthi coalition, united against a common enemy but fragmented and lacking a shared identity. The Hadi government wishes to regain control of all Yemen. The STC, giving voice to southern grievances against perceived northern domination dating to the end of Yemen’s brief 1994 civil war, wants an independent south. Framing Islah and the Huthis as two sides of one “northern” coin, the STC alleges Islahi infiltration of the Hadi loyalists when in fact these forces are largely southerners only loosely allied with Islah. The group’s rhetoric is also likely designed to garner support from the UAE, which reviles the Muslim Brotherhood.

South Yemen’s tangled politics, in turn, reveal the differing interests of Riyadh and Abu Dhabi, the heavyweights in the Saudi-led coalition. Though the two sides in Aden both claim the coalition’s full support, forces loyal to Hadi are Saudi-backed while the STC and Security Belts are backed by the UAE. The UAE entered Yemen as part of Saudi Arabia’s campaign to oust the Huthis and restore Hadi to power. Abu Dhabi recognises that Riyadh depends on Islah-affiliated figures such as Vice President Ali Mohsen al-Ahmar to sustain the anti-Huthi war effort. But UAE officials also view the Saudis’ relationship with Ali Mohsen and other Islamists warily, and consider the STC to be a vital non-Islamist counterweight. In turn, Saudi officials concede that the UAE and its southern allies have produced most of the war’s notable military successes, including the push toward the Red Sea port city of Hodeida in 2018. Yet some in Riyadh are nonetheless displeased by Abu Dhabi’s support for the STC, which they worry undermines Hadi and diverts attention from the fight against the Huthis.

The imperative of defeating the Huthis explains why the sides struck a balance in Aden, which Hadi named Yemen’s temporary capital after fleeing Huthi-controlled Sanaa in 2015. On the one hand, the UAE and its allies have allowed the government to retain a physical presence in Aden; on the other hand, STC-aligned forces have become the dominant power on the ground. But, with so many divergent interests inside the coalition, it is an unstable equilibrium.

If tensions in Aden cannot be eased, the risk is high that they will spread to other parts of the south.

At the moment, the balance of power on the ground appears to lie with the STC but outright victory is by no means assured for the secessionists. Both the STC and the Hadi government claim to have the upper hand militarily. While the STC has a larger number of affiliated forces in Aden and across the south, it is not clear that all its supporters will answer bin Breik’s call to overthrow the government. In the past, many STC commanders remained neutral during other STC units’ clashes with Hadi loyalists and even threatened to take the government’s side. Many other secessionist groups are wary of the STC, which they worry hopes to build a one-party state modelled on the People’s Democratic Republic of Yemen that governed the south before the 1990 unification. The STC denies having this ambition. Other southerners view the STC and especially its leadership as biased toward al-Dhale, a part of the south whose military forces were pitted against those from Abyan, President Hadi’s home governorate, in the brutal southern civil war of 1986. There are echoes of the past in today’s political alignments and fighting.

Full-fledged support from Abu Dhabi or Riyadh for either side could be a game changer. Hadi government officials claim that Saudi Arabia warned the STC that its jets would strike anyone attempting to enter the presidential palace. This claim cannot be confirmed, but Saudi armoured vehicles reportedly have been deployed at the palace entrance. The STC leadership will likely seek to avoid any action that might place it in direct conflict with Riyadh, consistent with the UAE’s views.

The fighting in Aden is not the first standoff between Saudi-backed and UAE-backed forces in Yemen, but if it continues, it could be the most destructive. If tensions in Aden cannot be eased, the risk is high that they will spread to other parts of the south. A battle in Aden or the wider south could also draw in southern forces engaged in the fight against the Huthis on the Red Sea coast and Islah-aligned forces from northern governorates. More broadly, such a turn of events could hurt UN-led efforts to broker a deal to end the war with the Huthis who, facing less military pressure, could be in a stronger position to question both the Hadi government’s credibility as its sole negotiating partner and its ability to deliver on any putative political agreement. Intensified clashes in the south also would have serious humanitarian implications. To begin, they likely would shut off access to Aden’s airport, many Yemenis’ only reliable gateway to the outside world. Flights have already halted temporarily. Moreover, clashes would stem the flow of goods coming into the country from Aden’s port, pushing up prices of fuel, food and other staples nationwide. Millions of Yemenis already cannot afford to meet their basic daily needs.

To head off further clashes, damage to UN-led negotiations and an even more pressing humanitarian emergency, Crisis Group recommends the following steps:

For too long, Yemen’s southern question has been an afterthought for diplomats. Even after the street battles of January 2018, little was done to resolve local tensions. The principal international stakeholders in Yemen have strong relationships with the rival sides in Aden, and now they have an opportunity to deal both with the immediate threat of conflict and its underlying causes. It is an opportunity they are unlikely to have again if they fail to seize it.

Saving the Stockholm Agreement and Averting a Regional Conflagration in Yemen

Ending the Yemen Quagmire: Lessons for Washington from Four Years of War