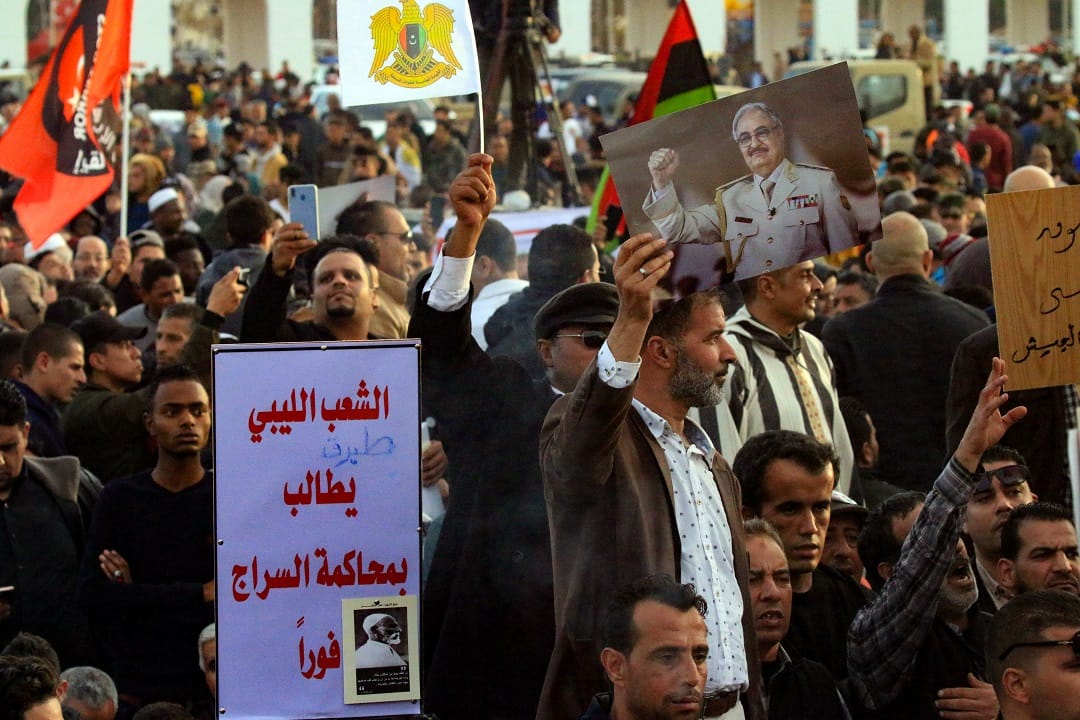 Supporters of Libyan military strongman Khalika Haftar (image) take part in a demonstration in the coastal city of Benghazi in eastern Libya, against Turkish intervention in the country's affairs on February 14, 2020. Abdullah DOMA / AFP
Commentary / Middle East & North Africa 04 May 2020

Khalifa Haftar, who commands forces besieging Tripoli, has announced he will replace UN-backed mediation in Libya with a new political roadmap and government. His proposal divided supporters; adversaries called it a coup. To stop a power struggle, Haftar’s regional backers should press him to reconsider.

In a short televised speech late on 27 April, Khalifa Haftar declared that he accepted the people’s “mandate” to scrap the 2015 UN-mediated Libyan Political Agreement (LPA) and empower the General Command of the Arab Libyan Armed Forces (ALAF), the military force he heads, to take charge of the country’s governing institutions.

The LPA gives international recognition to the Tripoli-based Government of National Accord, against which Haftar has waged a deadly war since April 2019. While neither Haftar nor the allied Tobruk-based House of Representatives and its government has recognised the LPA, they have accepted it as the basis for negotiations. In rejecting the LPA now, Haftar is implying that he is no longer committed to international efforts to mediate an end to the war – and will pursue an alternative political project.

In his speech, Haftar provided no details of what he has in mind. Instead, he repeatedly cited “the will of the Libyan people” and the “mandate” he claims they had given him. These were references to an address four days earlier, in which he had called on the Libyan people and local councils to reject the LPA and choose which institution should govern them. In the following days, a handful of local councils and tribal groups invited Haftar-led forces to take over the country’s institutions. It appears that Haftar used these calls to claim that his political proposal enjoys popular support.

Given the lack of details, it is hard to say exactly what Haftar is hoping to accomplish with this move.

Given the lack of details, it is hard to say exactly what Haftar is hoping to accomplish with this move. His principal objective may be to consolidate power in the ALAF’s hands in areas already under his control. Some of his supporters have suggested that Haftar may soon unveil a “constitutional document” that would serve as the basis for a transitional roadmap and new governing structures for these areas. Although the content of such a document is yet unknown, a political proposal that pro-Haftar politicians in Benghazi have been discussing over the past months may provide a hint. It includes appointing a military council or joint civilian-military body to replace the House of Representatives during this transitional phase and task it with appointing a new government in the east as a substitute for the current one led by Abdullah al-Thinni.

Haftar may also have been motivated by a desire to pre-empt any possible political negotiation between the House of Representatives and Tripoli – and perhaps sideline the House altogether. Although House Speaker Aghela Saleh and Haftar are allies, the military and Tobruk parliament have not always been perfectly aligned.

The most contentious issue between them appears to be a scheme suggested by Saleh on 23 April, the same day Haftar made his call on the Libyan people to “express” themselves. Saleh proposed to form a three-member Presidency Council (with one representative for each of Libya’s three historical provinces) that would appoint a new unity government to replace the current Tripoli-based council headed by Prime Minister Faiez Serraj; the House of Representatives in Tobruk would continue as Libya’s sole legislative body, and be charged with appointing a committee to draft a new constitution.

At the time, many Libyans interpreted Saleh’s statement as an opening toward Tripoli and UN mediation efforts, and thus directly at odds with Haftar’s simultaneous announcement. In the subsequent days, however, Saleh told Libyan media that his political proposal did not contradict Haftar’s statement but rather “complemented” it. He explained that both were aimed at achieving the same result: ending the LPA and replacing the “unconstitutional”, “unelected” Tripoli-based government with a new one.

At this point it is unclear whether Haftar still hopes to turn to the House of Representatives to supply a legal basis for his own proposal, for example by persuading its members to impose martial law or by demanding that they formally adopt the new constitutional declaration when it is unveiled.

Finally, Haftar may also be trying to deflect public attention from the Tripoli battlefield, where his forces have suffered setbacks in recent weeks. Pro-Tripoli forces have managed to regain ground since early April, in large part owing to Turkish military support. 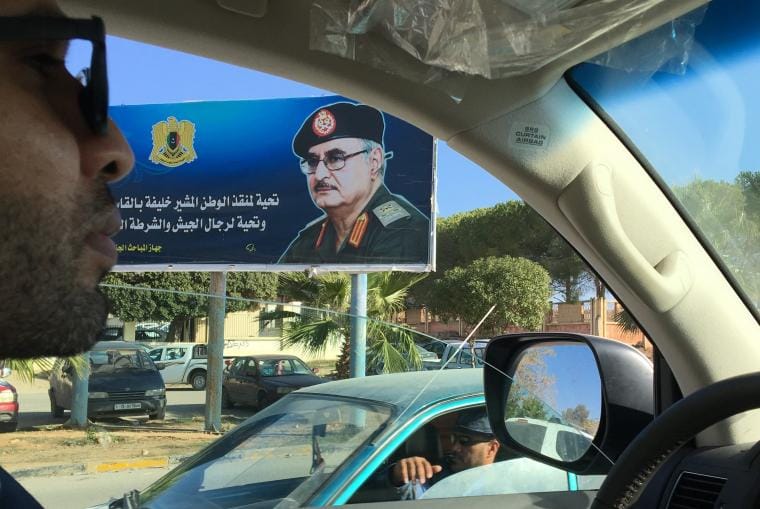 Posters of Field Marshall Khalifa Haftar line the streets of the eastern Libyan city of al-Bayda, where the (unrecognised) interim government in located, November 2018. CRISISGROUP
Haftar’s move has left his allies divided.

Haftar’s move has left his allies divided. The House of Representatives, which represents about one third of parliamentarians elected in 2014 and most of whom are Haftar supporters, has not officially responded to Haftar’s announcement, and consultations between Saleh and the military appear to be ongoing. But several House members have confirmed their support of Haftar’s proposal, while others have privately expressed dismay at this apparent authoritarian drift.

Eastern Libya has seen demonstrations backing Haftar’s proposal in recent days, but it is unclear whether these are choreographed or genuine expressions of support. Other groups in the east are on the fence, largely because they fear a new form of governance that could shunt aside the House of Representatives and lead to military rule, which they oppose.

Nor is it clear whether Haftar’s initiative has the support of all the ALAF commanders. The likelihood that his rank and file will stray from his preferred course is slight, but if popular mobilisation against it grows, cracks within the ALAF could emerge.

Several government officials cited Haftar’s speech as further proof that he intends to carry out a military coup.

The Tripoli government called Haftar’s remarks “a comedic play” and reaffirmed its intention “to defeat his project and eliminate his illusion of taking over power”. Several government officials, including the interior minister, cited Haftar’s speech as further proof that he intends to carry out a military coup. Many government supporters already consider Haftar a putschist following his first appearance as a military leader, his refusal to accept the LPA and his declaration of war on Tripoli.

None of Haftar’s external backers has publicly expressed support for his proposal. Egypt’s foreign ministry issued an ambiguous statement, renewing its praise for Haftar’s contribution to fighting “terrorism” in Libya, while reaffirming its commitment to a political solution to the crisis. Yet the ministry also stressed that its support for a political solution “does not mean and should not lead to complacency in facing the extremist terrorist currents supported by Turkey or entering into negotiations with them regarding the future of Libya”, which could be read as a reference to the Muslim Brotherhood, which Cairo considers a terrorist group and Ankara supports.

Like Egypt, the United Arab Emirates issued a statement that stayed silent on Haftar’s call for the army to take power. Instead, Abu Dhabi reiterated its commitment to a UN-supervised political process and expressed “its categorical rejection of the Turkish military intervention” in support of the Tripoli government.

Another Haftar backer, Russia, was more explicit in distancing itself: Foreign Minister Sergei Lavrov rejected Haftar’s “move to seize control of the country”, and reaffirmed his country’s commitment to a solution “through politics and diplomacy”.

France and the U.S., two countries that have previously supported Haftar but do not back his siege on Tripoli, issued relatively mild statements. The U.S. embassy in Tripoli took to Twitter to express its “regret” that Haftar had suggested that Libya’s political structure could be changed through a unilateral declaration. France likewise said no solution can be achieved “through unilateral decisions”, reaffirming its support for talks under UN auspices.

Both Italy and the UN Support Mission for Libya distanced themselves from Haftar’s remarks and again made explicit their support for the LPA and the institutions emanating from it, including the Serraj-led Presidency Council.

Turkey, Tripoli’s military ally, was most vocal in its condemnation.

Turkey, Tripoli’s military ally, was most vocal in its condemnation. Its foreign ministry declared that “Haftar once again revealed that he does not want the crisis in Libya to be resolved via political dialogue, that he does not support international efforts in this direction, including the outcome of the Berlin Conference, and aims to establish a military dictatorship”. Qatar – which also backs the Serraj government – followed suit by condemning Haftar’s declaration.

It is too early to say how Haftar’s declaration will play out on the ground, whether in eastern Libya or along the front lines around Tripoli. His ability to carry out what he proposes and to sustain the war in Tripoli will depend in large part on whether his local and foreign supporters continue to stand behind him.

In a surprise development on 29 April, Haftar’s spokesperson announced that the ALAF would cease hostilities around Tripoli for what remains of the month of Ramadan, adding that this temporary offer of truce comes at the international community’s request. The Tripoli government turned down the offer, and in a 30 April press statement affirmed its “steadfast resolve” to continue its “legitimate defence” of the city, “strike at the sources of threat wherever they exist” and “finish off the outlaw groups that disregard the lives of Libyans throughout the country”.

For Haftar’s Libyan critics, his 27 April political declaration has only reinforced the notion that he cannot be a partner in negotiations. By giving them yet another reason to continue to fight him, Haftar’s latest gambit risks further perpetuating this tragic war. His allies should quickly and forcefully press him to both reconsider and commit himself to the UN-led process.