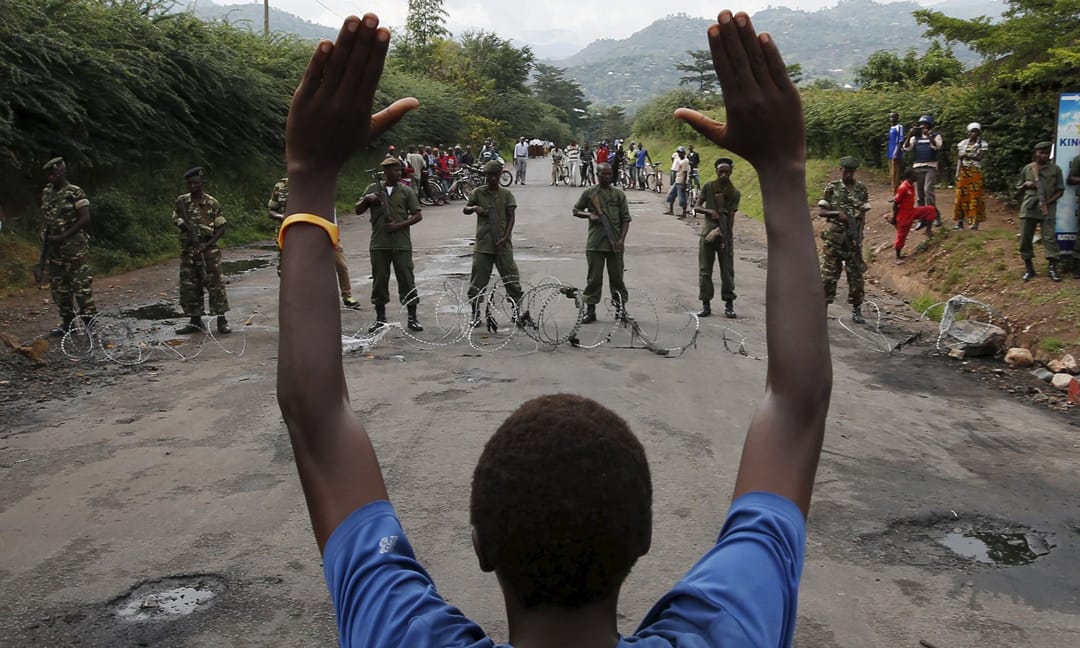 A protester holds his hands up in front of soldiers during a protest against Burundi President Pierre Nkurunziza and his bid for a third term in Bujumbura, May 2015. REUTERS/Goran Tomasevic
Alert / Africa 05 November 2015

Burundi again faces the possibility of mass atrocities and civil war. Escalating violence, increasingly hardline rhetoric and the continued stream of refugees (more than 200,000) indicate that divisions are widening, and the “national dialogue” is doing little to relieve the mounting tensions. According to Crisis Group’s sources as well as media reports, it appears that President Pierre Nkurunziza and those around him intend to use force to end the protests that have been held in Bujumbura since April. The president made public an ultimatum giving the “criminals” seven days to lay down arms. Révérien Ndikuriyo, the Senate president, cryptically warned on 1 November that the police would soon go to “work” and asked district heads to identify “elements which are not in order”. The language is unambiguous to Burundians and chillingly similar to that used in Rwanda in the 1990s before the genocide.

The one national institution capable of arresting the slide, the army, is fracturing and nearing breaking point. Firm and decisive diplomatic intervention at a minimum is required to prevent a civil war and its inevitable massacres.

U.S. President Barack Obama’s 27 October decision to exclude Burundi from the “African Growth and Opportunity Act” is an important signal of his country’s growing concern, but it is not enough. The African Union (AU) Peace and Security Council (PSC) issued a strong communiqué on 17 October but is still deferring to the East African Community. However, that regional body may be too divided, and its chief mediator, Ugandan President Yoweri Museveni, may be too preoccupied with forthcoming elections at home and the implementation of the struggling peace deal in South Sudan. The AU PSC, with the active support of the U.S., UK, and European Union, should, therefore, follow through on the decision expressed in its communiqué and convene a meeting of Burundian government and opposition representatives in Addis Ababa, if such a meeting cannot be quickly convened in Kampala under the chairmanship of President Museveni. It should make clear that the current situation is unacceptable and that it will intervene if President Nkurunziza does not change course.

In particular, the AU PSC’s threat of an African-led peace implementation mission in the event of further deterioration must be made more credible through member-state support and public pledges of donor support by the U.S. and others. In addition, the AU, the U.S., UK and other concerned members of the international community should quietly stress to the Rwandan and Tanzanian governments that they are needed to play more constructive roles.