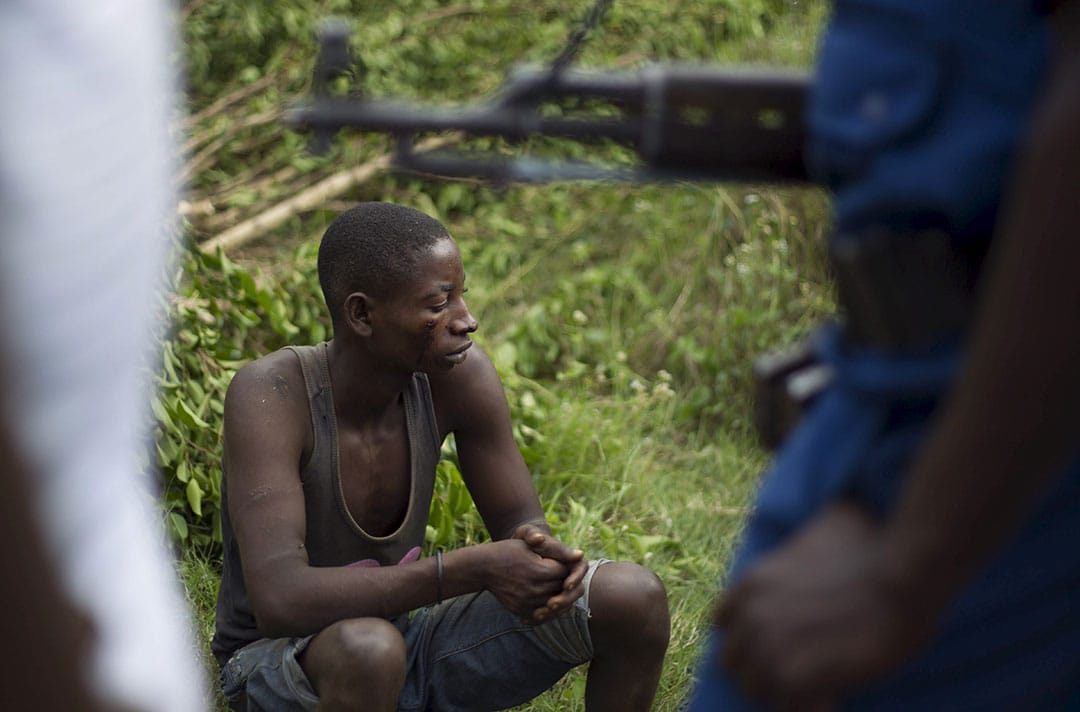 A suspect identified by a former rebel as being involved in the burial of bodies at a mass grave is detained by police officers at the scene of the grave in Mutakura, Burundi, 29 February 2016. REUTERS/Evrard Ngendakumana
Report 235 / Africa 20 May 2016

The current political crisis has reopened the wounds of Burundi’s past. Hardliners now dominant in the government brutally stifle dissent, fuel ethnic hatred, and undermine the Arusha accord that framed Burundi’s peace for the past decade. The international community should push toward real dialogue, and prepare to intervene if violence escalates.

One year after President Pierre Nkurunziza’s decision to run for a third term sparked the crisis, the situation remains critical. The radicalisation of the regime, which had been steadily increasing since the second post-conflict elections in 2010 and intensified by tensions over the third term in 2015, has seen the rise of the most hard-line leaders of the ruling party. These figures are determined to do away with the institutional system established by the Arusha accord – an agreement between Hutu and Tutsi elites in 2000 which put in place an ethnic quota system for state institutions, including the army, and established a two-term presidential limit. This political strategy to dismantle the accord and the return of violent rhetoric and tactics reminiscent of the civil war, have generated great fear within Burundian society – which, although deeply alarmed, has not yet given in to politicians’ tactics of inciting ethnic hatred. With the government and opposition invited to meet in Tanzania on 21 May, it is imperative that the guarantors of the Arusha accord call on them to engage in a meaningful dialogue on the future of the peace agreement and avoid a repeat of the country’s tragic past.

Violence, fear, socio-economic decline and deepening social fractures have characterised the beginning of the president’s third term. Following protests in April 2015 and Nkurunziza’s re-election in July, confrontation has taken the form of urban guerrilla warfare which, beyond the targeted assassinations, torture and disappearances, has had an insidious and devastating impact. By using ethnically-charged rhetoric and demonstrating an obvious desire to bring the democratic consensus of the Arusha accord to an end, the regime has ruptured its relations with part of the population. Some 250,000 Burundians have fled, including a significant portion of the political and economic establishment as well as civil society activists. The flight has drained Burundi of its most dynamic citizens and exposed divisions between the regime on one hand, and the army, the capital and the Tutsi community on the other. Trade between Bujumbura and the countryside has also been disrupted and, according to recent estimates, 10 per cent of the population (1.1 million people) are in need of humanitarian assistance of some kind.

The paradox at the heart of this confrontation is that while Burundi has democratised, the ruling party, the Council for the Defence of Democracy – Forces for the Defence of Democracy (CNDD-FDD), has not. An institutionalised ethnic power-sharing system is completely divorced from a radicalised ethnically-homogenous party reverting to its historical roots (rebel leaders of the civil war era). As the opposition, now forced into exile, seems unable to overcome its own longstanding ethnic cleavages, the regime’s current strategy of repression (alleging a Tutsi conspiracy, breaking up the security services and creating units loyal to the regime) has revived fears of genocidal violence within the Tutsi community. There are no signs at present that the population is ready to be mobilised for violence on ethnic grounds. But the simmering social and humanitarian crisis, part of the population’s physical, political and economic insecurity, and fear itself, have created the perfect conditions for the situation’s further deterioration and ethnic polarisation.

While many Burundians and the international community believed the ethnic problem had been solved with the Arusha accord, it has returned to the fore with President Nkurunziza’s third term. To reverse this trend, a debate should be organised on the necessary amendments to the peace agreement. The regime is presently staging sham debates through a “national dialogue” which remains completely under its control. Ideally, a debate on the Arusha accord would take place in Burundi. This, however, would require the government to lift current restrictions on civil liberties (freedom of expression, press and assembly, etc.) and allow the opposition to return from exile.

Before these conditions are met and in order to overcome the current impasse, a discussion between the opposition and the government on the future of the Arusha accord should take place outside of the country under the auspices of the guarantors of the peace agreement. The meeting called by former Tanzanian President Benjamin Mkapa on 21 May should be the first step in the dialogue on the future of the Arusha accord. In parallel, international actors, the UN and the African Union (AU) in particular, should take measures to prevent the crisis from descending into ethnic conflict and a humanitarian emergency, and prepare for an immediate intervention to prevent large-scale violence.

To reduce tensions, restart the dialogue and convince the government and the opposition to participate

To the guarantors of the Arusha accord (in particular Tanzania and South Africa):

To the AU and the EU:

To donors who suspended part of their financial aid (the EU, Belgium, France, Germany, the Netherlands, the U.S. and Switzerland):

To the UN, the AU, the EU and bilateral partners:

To Burundian and international NGOs involved in local conflict resolution before the current crisis with local mediation structures in place:

To donors who suspended part of their financial aid (the EU, Belgium, France, Germany, the Netherlands, the U.S. and Switzerland):