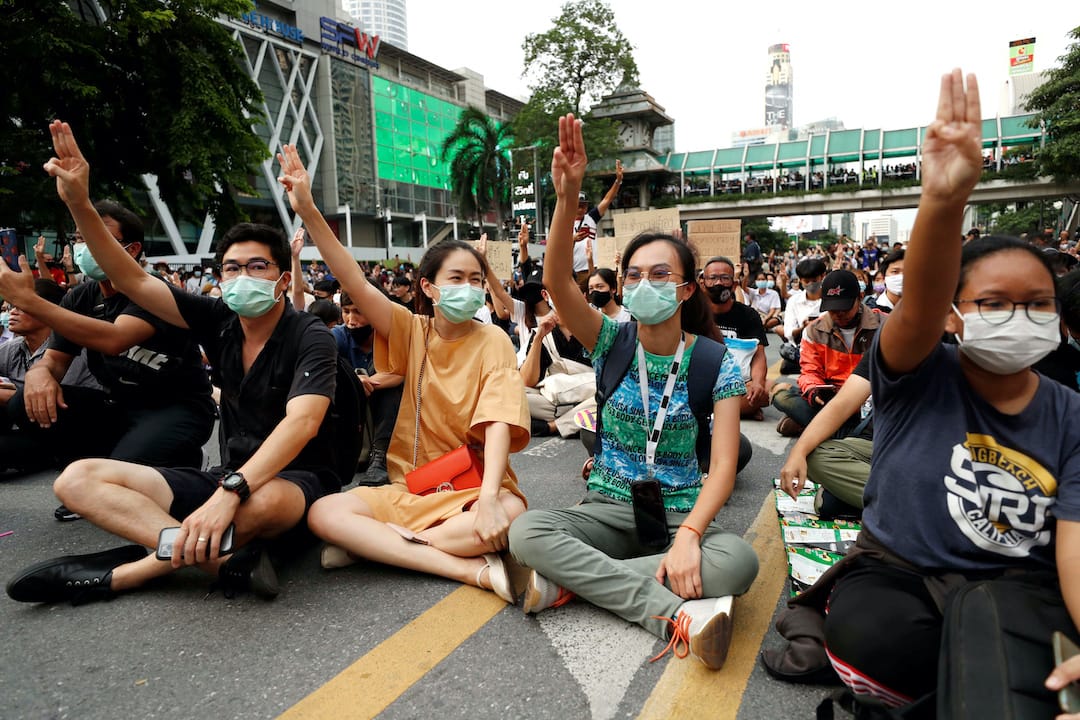 Anti-government protests and popular demands for reform, including of the once-sacrosanct monarchy, have accelerated in Thailand. In this Q&A, Crisis Group’s senior analyst for South East Asia, Matt Wheeler, explains how this crisis over political legitimacy has now reached a dangerous impasse.

Why are this week’s protests significant?

On the evening of 16 October, riot police used water cannons in central Bangkok to break up a crowd of several thousand mostly young protesters who were assembling for the second day in defiance of a ban on public gatherings. The episode marked a violent escalation in a series of pro-democracy protests that has been gaining momentum over the past three months and intensifying further over the past three days.

A day earlier, more than 10,000 demonstrators had gathered a few blocks away, defying measures announced the same morning under a “serious state of emergency”, which prohibits gatherings of over four people in the capital. The government put the extraordinary measures in place to “maintain peace and order” after marchers reached the prime minister’s office and held a large rally the day before. Despite threats that anyone attending or even promoting the protest online would be arrested, thousands flooded the Rachaprasong intersection, in the heart of the city’s shopping centre district, soon overwhelming the sizeable police deployment. The protesters occupied the area all evening, cheering a succession of speakers before dispersing peacefully. Rachaprasong is a place redolent with symbolism: it was the locus of 2010 protests demanding a new election, which were suppressed in a deadly crackdown by Thai army troops that May.

Protesters called for the release of more than twenty activist leaders who had been arrested earlier in the day. Soon after authorities announced the new emergency decree, in the pre-dawn hours, the police had also chased hundreds of protesters away from the streets around Government House, where they had set up camp following a day-long march on 14 October. Much better attended than the government had expected, that march was also of symbolic significance as it coincided with the anniversary of the 1973 student-led uprising that toppled a military dictatorship.

The enhanced state of emergency failed to quash the popular movement.

The large turnout at Rachaprasong – on short notice and in defiance of authorities’ threats to arrest anyone joining – signalled that the enhanced state of emergency had failed to quash the popular movement. While most recent protests appeared to include a representative sample of the young, middle-aged and old, the crowd on 15 and 16 October was decidedly youthful, with most demonstrators appearing to be in their early twenties. Some in the crowd were high school students and first-time protesters, driven to join by what they saw as an unjust emergency decree clamping down on any expression of dissent.

Who are the protesters and what do they want?

Street protests are a regular feature of Thai politics, but the 2020 gatherings are different from earlier rounds of collective action in two ways. First, students and young people, who were largely absent from the Red Shirt and Yellow Shirt movements that shook the country between 2006 and 2014, are the driving force of the present mobilisation. The youth accuse the current government of being a reincarnation of the junta that ruled between 2014 and 2019, laundered by the 2017 constitution and a slanted general election in March 2019. They insist that the government – particularly the (unelected) prime minister and ex-junta leader, Prayuth Chan-ocha – resign. Other demands include dissolution of parliament and a new constitution drafted with public consultation.

Secondly, and more strikingly, activists are calling for reform of the monarchy – namely, that it be brought under the constitution. Anon Nampa, a human rights lawyer, thrust the country into a new era on 3 August when he called for palace reform at a small demonstration in Bangkok. On 10 August, at a rally at a university campus north of the capital, a young student activist, Panusaya Sithijirawattanakul, read a ten-point manifesto on reforming the monarchy, including an end to royal endorsement of coups d’état. Both of them were arrested on 15 October, along with other prominent and vocal students.

Activists are calling for reform of the monarchy – namely, that it be brought under the constitution.

Since these controversial speeches, protesters have criticised King Maha Vajiralongkorn, or Rama X, with unprecedented candour – for residing in Germany while the country faces the COVID-19 pandemic and for squandering the people’s taxes, among other issues. Until recently, such open criticism of the monarchy was unheard of in Thailand. It is punishable by up to fifteen years of prison. But while the harsh lèse-majesté law remains on the books, in practice, the longstanding taboo on public discussion of the monarchy has eroded surprisingly quickly over the last two months. Some protesters now openly lampoon the king, who acceded to the throne three years ago after his father, who had reigned for 70 years, died.

Despite this unprecedented criticism, which distresses many Thais, the government had refrained until 15 October from using the lèse-majesté law to curtail the protests. Police had arrested some student leaders for violating an earlier emergency decree imposed to support public health measures amid the pandemic and other laws, but then released them on bail. The students immediately returned to giving fiery speeches, and protests proliferated across the country, including a series of rallies by high school students demanding reform of the country’s stodgy and outmoded educational system.

The government’s tolerance now appears exhausted. The immediate pretext for the imposition of the “serious state of emergency” was alleged threats to Queen Suthida, whose motorcade passed anti-government protesters on 14 October, after apparently diverging from a planned route earlier cleared by police. Protesters raised three-finger salutes inspired by the popular Hunger Games film series – in which oppressed masses adopt the gesture as a symbol of defiance of tyranny – and jeered as the royal convoy passed, but there was no violence or obvious threat thereof. Two activists have since been arrested and charged with endangering the queen, which carries a potential sentence of life in prison.

Rallies calling for far-reaching political change started to escalate earlier this year, particularly on university campuses, after the Constitutional Court dissolved the upstart Future Forward Party in February. Established in 2018, the party had surprisingly come in third in last year’s general election, proving to be extremely popular with young voters. The COVID-19 pandemic stifled burgeoning demonstrations, but rallies resumed as the lockdown eased. The abduction of exiled activist Wanchalerm Satsakit in Cambodia in June – following the unexplained disappearance of at least eight others since 2016 – also sparked public outrage and galvanised a new generation of activists.

Faced with growing protests, the government seemed to relent on amending the 2017 constitution, a document drafted by junta appointees primarily to facilitate continued junta rule with a sheen of electoral legitimacy. But on 24 September, a two-day parliamentary debate on six amendment bills proposed by various parties ended without a vote, as the legislature went into recess until November. Any move to amend the constitution requires support from two thirds of the 250 appointed senators, which did not materialise. Instead, the governing Phalang Pracharat Party proposed a committee to study the bills for 30 days. Opposition parties walked out, denouncing what they viewed as a delaying tactic. Government officials have since hinted that charter amendment could take years, leading many to believe nothing will happen until the next general election in 2023. Protesters have little confidence in the government’s willingness to revise its bespoke political order.

What are the risks of a government crackdown?

Thailand holds the world record for number of military coups, and its history is checkered with political violence. Many observers thus fear that the government – run largely by ex-generals – could opt for repression to quell the rising protests. The 15 October state of emergency, arrests of activists, and deployment of riot police against peaceful protesters mark a clear shift in the government’s response. With protesters emboldened by the 15 October rally’s success, they are likely to stage further demonstrations in Bangkok, in spite of warnings from senior government officials that all who participate face arrest and charges of violating the emergency decree. In view of the scale of recent rallies, more stringent government actions present a risk of violence greater than at any point since the April-May 2010 army crackdown that killed more than 90 people.

The stakes of the conflict, including the monarchy’s role in Thai society, and the terms in which both sides are speaking about it, are elemental and fraught. For many Thais, the current moment evokes memories of 6 October 1976, when police and right-wing paramilitaries – set off by an alleged insult to Vajiralongkorn, who was then crown prince –massacred dozens of pro-democracy students at Thammasat University.

What can be done to reduce tensions?

The conflict between proponents of popular sovereignty, on one hand, and a hierarchical order underpinned by the monarchy, on the other, is swiftly coming into sharp relief. There is no evident mechanism in Thai society for addressing this conflict, but there are actions that each side can take now to reduce tensions and move toward consensus. First, the protesters should continue to adhere to their pledge of non-violence. Secondly, the government should refrain from using force to disperse peaceful crowds, lift the state of emergency, and protect rights of assembly and free speech. Thirdly, the government should publicly commit to a brisk timetable for amending the constitution and paving the way for a constitutional drafting assembly.

More daunting is the need for a fresh concord on the monarchy’s changing role. Government officials and royalists insist that public discussion of this role is off limits, but their position is, in light of recent events, anachronistic. The degree of repression necessary to effectively reinstate the prohibition, including online, would tarnish both the government and the monarchy. Given the propensity of the army to abrogate charters, a new constitution alone will not resolve Thailand’s crisis of political legitimacy, but it could be a starting point in the search for a new consensus on how political power should be acquired, exercised and held to account.

COVID-19 and a Possible Political Reckoning in Thailand