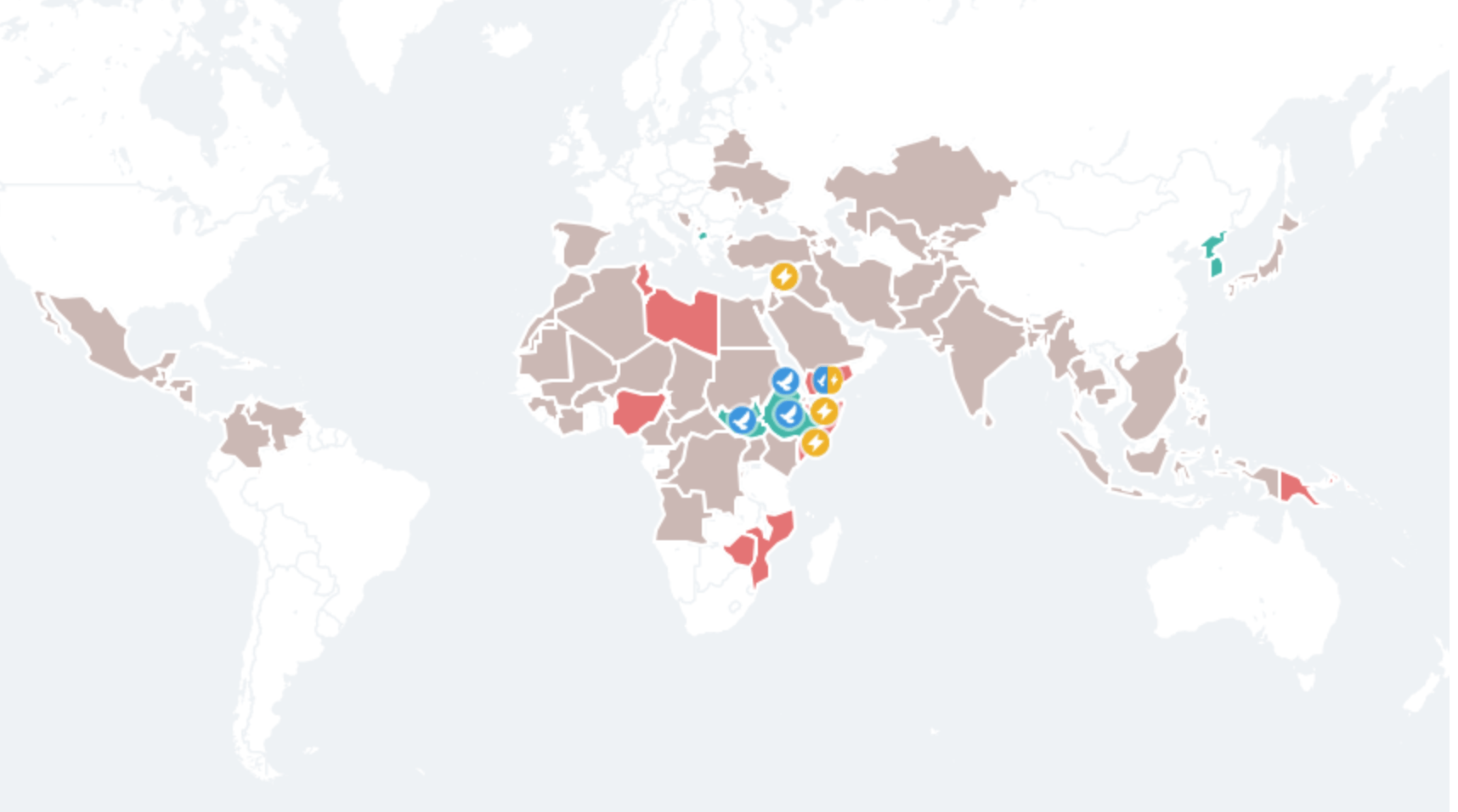 In June, Yemeni forces backed by the United Arab Emirates accelerated their offensive to take the Huthi-held city of Hodeida. A fleeting opportunity exists to find a mediated settlement and avoid prolonged urban warfare. In Syria, pro-government forces intensified efforts to retake territory in the south west, risking worse violence in July, while in Libya, new fighting over oil facilities aggravated tensions. The conflict between Somalia’s Puntland and Somaliland spread, and looks set to escalate; attacks linked to Nigeria’s farmer-herder conflict left over 200 dead; and radical Islamists in Mozambique stepped up attacks. The month saw heightened political rivalry in Tunisia, and election-related violence in Zimbabwe and Papua New Guinea. High-level engagement between North Korea and the U.S. paved the way for a diplomatic process, and Macedonia and Greece reached an agreement on their name dispute. Opportunities to advance peace opened up in Africa with Ethiopia and Eritrea taking tentative steps to address their border dispute, and South Sudan’s warring leaders signing an initial framework agreement.

In Yemen, forces backed by the United Arab Emirates stepped up their offensive to take the port city of Hodeida from Huthi rebels, pushing up to the city’s southern suburbs. As we explained, mediation efforts led by UN Special Envoy Martin Griffiths toward a solution that safeguards all sides’ vital interests could – with strong international pressure on the warring parties – produce a settlement for the city, and serve as a basis for talks on a way out of the wider conflict. But if the belligerents continue to reject his proposals, a battle for Hodeida – home to 600,000 – would likely have devastating humanitarian consequences. 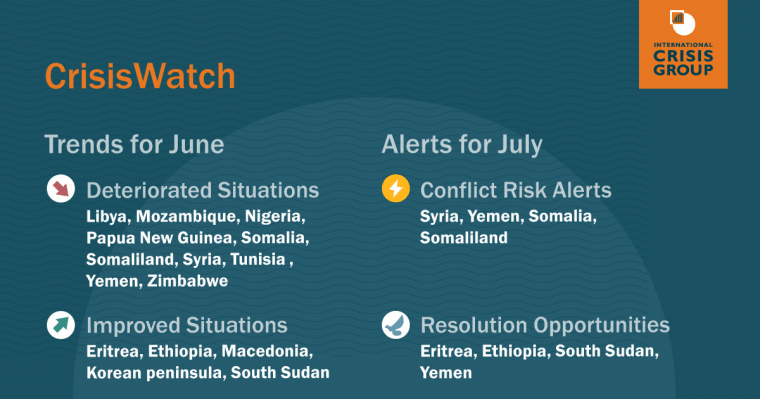 A feud between Tunisia’s prime minister, Youssef Chahed, and President Essebsi intensified, with Chahed firing the interior minister, Essebsi’s ally. Ahead of the 2019 presidential election, the rivalry is polarising the political field and could hamper much needed legislative reform.

Fighting between Somaliland and Somalia’s semi-autonomous Puntland region over contested territory spread from Tukaraq – where both sides continued to beef up their positions – to Las Anod, capital of the disputed Sool area. Incendiary rhetoric from both sides bodes ill. To stave off war, the UN – backed by Somalia and Ethiopia – should renew its mediation to broker a ceasefire, ensure both sides commit to withdraw troops, allow in humanitarian aid and launch talks aimed at a long-term settlement.

In Mozambique’s neglected and predominantly Muslim far north, Islamist militants, active since October, stepped up the rate of attacks, raiding some seven villages and killing at least 39 people. Ahead of Zimbabwe’s elections in July, an explosion at a rally for President Mnangagwa killed two and raised concerns for security around the vote. In Nigeria, attacks linked to the conflict between herding and farming communities took a yet more horrifying toll; over 200 are thought to have been killed in attacks and reprisals over five days in Plateau state.

Violence erupted in Papua New Guinea’s Southern Highlands province as protesters, angry about a failed court challenge to the 2017 provincial election result, set fire to an aeroplane and official buildings in the provincial capital, prompting the government to declare a state of emergency and deploy troops.

A historic summit between North Korean leader Kim Jong-un and U.S. President Donald Trump on 12 June produced a vague statement including a reaffirmation by Pyongyang of its commitment to work toward “complete denuclearization” of the peninsula. As Crisis Group wrote, the summit represented a shift from a confrontational track to a diplomatic one, but needs to be followed by the hard work of hammering out a path toward denuclearisation. Later in the month, U.S. officials were quoted saying that Pyongyang has been stepping up production of enriched uranium at secret sites.

Macedonia and Greece signed a historic agreement resolving their decades-long dispute over Macedonia’s official name, now to be the Republic of North Macedonia. The deal, which still needs to be ratified in the face of opposition in both countries, unblocks Greek opposition to Macedonia joining the European Union and NATO.

Relations between Ethiopia and Eritrea, hostile since the 1998-2000 border war, began to thaw. Ethiopian Prime Minister Abiy’s pledge to cede contested territory and initial talks opened the door to greater neighbourliness and regional stability. In another boon for the region, South Sudan’s warring leaders, President Salva Kiir and former Vice President Riek Machar, signed an initial framework agreement to enact a ceasefire, work toward a new transitional government and, with Sudan, secure the oil fields. We welcomed this best, and only, hope for a breakthrough and urged other African leaders to lend it cautious support.