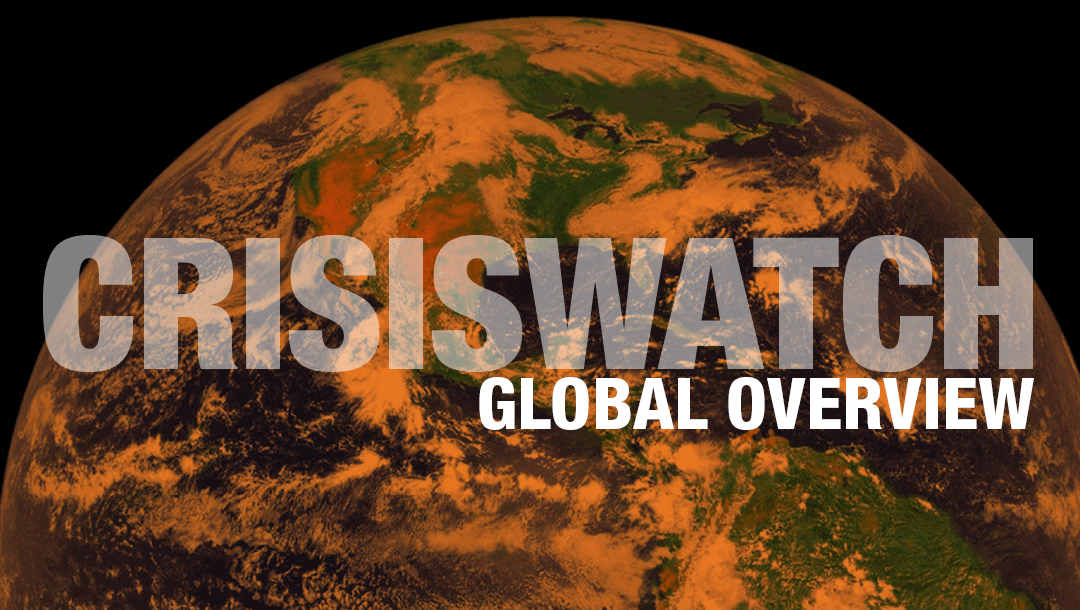 The latest edition of Crisis Group's monthly conflict tracker highlights dangers of escalating conflict in Burkina Faso, Guinea-Bissau and Iraq, and a resolution opportunity in Bolivia.

In November, security forces in both Iraq and Iran brutally suppressed mass protests, with over 100 killed in both places; Iraq’s political instability could lead to more violence in coming weeks. In Syria, fighting escalated between Russian-backed government forces and rebels in the north west, and the standoff between Algeria’s authorities and protesters intensified as demonstrators turned up their calls to cancel December’s presidential polls. Violence against civilians surged in DR Congo’s east and Guinea-Bissau’s run-off elections in a few weeks’ time could spark unrest. In Burkina Faso and Mali, jihadists inflicted heavy losses on security forces and civilians, while in Tajikistan suspected ISIS militants reportedly attacked a border post in the south. In Asia, the victory of Gotabaya Rajapaksa in Sri Lanka’s presidential polls sparked fears of ethnic polarisation and repression. Political confrontation heightened in Somaliland, Somalia’s Galmudug state, Georgia and Nicaragua; and Bolivia’s crisis worsened, with security forces cracking down on protesters. Tensions rose on the Korean peninsula after an apparent resumption of North Korean missile launches. On a positive note, Bosnia named a prime minister after a thirteen-months hiatus. Chad’s government and a community defence group in the north signed a peace deal, and Yemen’s government entered a power-sharing agreement with separatists to end hostilities in the south. 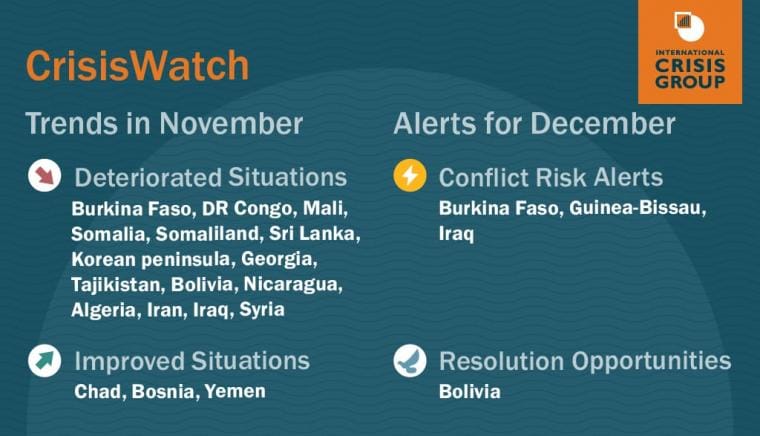 In the Middle East and North Africa, Iraqi security forces continued to brutally suppress protests against the ruling elite leaving over 100 dead, and Prime Minister Mahdi resigned; the political vacuum could lead to greater unrest in December. In Iran, a violent crackdown on protests sparked by a rise in fuel prices led to the deaths of at least 161 civilians, and the government further breached the 2015 nuclear deal. In Syria, fighting intensified in the north west as Russian-backed government forces ramped up their offensive in the last remaining rebel stronghold. In Algeria, the standoff between protesters and security forces intensified as demonstrators called on the government to cancel the presidential election planned for 12 December. In Yemen, in an unexpected turn of events, the government and southern separatists signed an agreement to end hostilities in the south, and Saudi Arabia scaled back its airstrikes in Huthi-controlled areas in the north.

In Africa, suspected jihadist attacks against civilians, officials and security forces rose markedly in Burkina Faso, and President Kaboré’s call for volunteers to help counter the jihadist threat could lead to greater violence in December. In Mali, jihadists continued to inflict heavy losses on the military fuelling further protests against the government and foreign forces, while intercommunal violence persisted in the centre. Tensions rose between Somalia’s federal government and a local militia in Galmudug federal member state ahead of local elections, and between Somaliland’s government and opposition party Waddani over delayed polls, while Al-Shabaab, for the first time, briefly captured a village in Somaliland. In DR Congo, the military ramped up its offensive in the east against armed group Allied Democratic Forces (ADF), which in response killed about 100 civilians. In Guinea-Bissau, violence could escalate around the second round of presidential elections between former Prime Ministers Domingos Simões Pereira and Umaro Sissoco Embaló, scheduled for 29 December. In Chad, the government and a community self-defence militia in the north signed a peace agreement ending a year-long conflict.

In Asia, the decisive victory of polarising wartime figure Gotabaya Rajapaksa in Sri Lanka’s presidential elections, along with his appointment of controversial figures associated with the atrocities during the civil war, prompted fears over a rise in political repression and ethnic tensions, and an end of reconciliation and transitional justice efforts. Tensions increased in the Korean peninsula, with another round of what Japan said appeared to be North Korea missile launches in late November.

In Latin America, the political crisis engulfing Bolivia following controversial general elections in October worsened; 29 people are reported to have been killed since the polls as security forces cracked down on protesters supporting former President Morales. An agreement between the interim government and Morales supporters late month offered hopes for de-escalation. In Nicaragua, the government intensified threats and attacks on political opponents and churches, despite mounting international pressure.

In Europe and Central Asia, thousands of people joined protests across Georgia after the parliament failed to adopt promised legislation for a new electoral system that would allow the opposition to gain more parliamentary seats during elections scheduled for late 2020, and clashed with the police and government supporters. In Tajikistan, authorities reported that twenty alleged ISIS-linked militants attacked a Tajik border post in the south near the border with Uzbekistan, with security personnel and militants killed in a subsequent clash. Thirteen months after Bosnia’s October 2018 elections, members of the country’s tripartite presidency agreed on a new prime minister, paving the way for a new government.