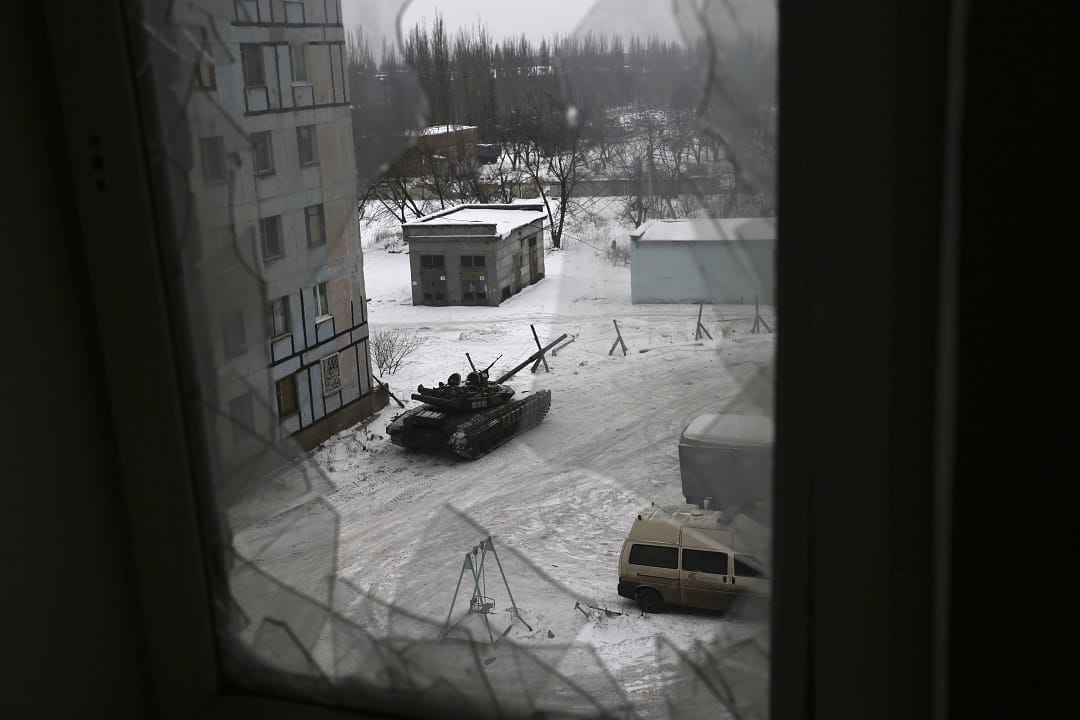 A tank from the Ukrainian Forces is stationed outside a building in the flashpoint eastern town of Avdiivka, just north of the pro-Russian rebels' de facto capital of Donetsk, on 2 February 2017. AFP/Alexey Filippov
Commentary / Europe & Central Asia 03 February 2017

Renewed fighting in eastern Ukraine is quickly turning into a litmus test of Russia’s intentions in backing Ukrainian separatist rebels, and the real willingness of the West, in particular the United States, to support Kyiv. Fears over Washington’s wavering may also cause positions to harden in the protracted conflicts in Europe’s East, most immediately in Georgia.

Renewed fighting in eastern Ukraine in the first weeks of U.S. President Donald Trump’s administration has laid bare fears in Europe's East about Russia’s declared intent to restore its former dominance in the region – and about whether or not the U.S. will continue to provide a counterweight to Moscow’s assertiveness.

Fighting that broke out on 29 January in eastern Ukraine, around the Kyiv government-controlled industrial town of Avdiivka and separatist-controlled railway hub of Yasynuvata, has continued for six days. Violence has also swept from this traditional hotspot across the whole Donetsk region: the Special Monitoring Mission of the Organization for Security and Cooperation in Europe (OSCE) has registered more than 7,000 ceasefire violations in the area on 1 February alone.

Some things seem clear for now: most of the fighting is being carried out at a distance, using artillery and rockets. But neither side has crossed the front line and tried to seize territory, which could fatefully undermine the Minsk peace process. As they have done in the past, both sides seem to be testing their adversaries’ resolve. Kyiv probably hopes that the fighting will once again convince their U.S. and European backers that any reduction of support would be disastrous. Moscow is probably trying to remind Kyiv that it is not going to give up the separatist entities. As usual, however, politicians are scoring points at the price of civilian deaths and further destruction of vital infrastructure in the war zone.

The current fighting has destroyed power lines and water systems, producing a new humanitarian emergency. People in and around Avdiivka, long among the most directly affected by the conflict, are without electricity. Around 1 million people in the region have suffered from disrupted water supplies or lack of heating in temperatures that are well below freezing. More water infrastructure damage could lead to an environmental disaster if chlorine supplies were to leak.

The two sides trade accusations on who is to blame for the new violence in the nearly three-year-old conflict, which has killed almost 10,000 people and pits Ukrainian government forces against Russian-backed separatists in a band of territory across eastern Ukraine. Rebels, and their backers in Moscow, may simply be testing how far they can go and how much Western support the Ukrainians have.

Kyiv’s positions are bound to get more entrenched if U.S. support weakens. If the U.S. were to lift sanctions on Moscow relating to its actions since 2014 in Crimea and eastern Ukraine, some in Kyiv have informally told Crisis Group that Ukraine’s only choice may be to escalate.

An official close to the Minsk talks said, and many commentators agree, that the escalation is directly linked to shifts in the geostrategic environment since the election of President Trump in November. The local, regional and geostrategic levels at which conflicts in Europe’s east play out are all directly linked, as must be any resolution.

Ukraine, which seeks to integrate into Euro-Atlantic political and economic institutions, was concerned about lessening support from Washington even before the new U.S. administration took office. The European Union’s reach is weakening as its own challenges grow, and Russia is seen as undermining Western unity on sanctions by multiple means, including both open and covert support to populist and nationalist parties ahead of key 2017 elections in France, Germany and the Netherlands. In late 2016, a former senior Kyiv official told Crisis Group that Ukraine feels abandoned, especially on security matters. Kyiv, for its part, could have done more to increase Ukraine’s resilience, including by addressing corruption that is chipping away support for President Petro Poroshenko’s government.

The dangers for Kyiv increase if it loses resolute Western support, and especially if the U.S. wavers or drops its backing for continued sanctions on Moscow. President Trump has hinted that a deal is possible if Moscow cooperates on the anti-terrorism front. Trump refused to rule out the dropping of the sanctions in a press conference with United Kingdom Prime Minister Theresa May on 27 January. The next day, the first call between Trump and Russian President Vladimir Putin covered opportunities for closer cooperation, and reportedly touched on the war in Ukraine with no public reference to sanctions.  U.S. Ambassador to the UN Nikki Haley’s 2 February remarks to the Security Council stressed that the U.S. would not lift the sanctions until Crimea is returned to Ukraine. Her words need to be backed up by President Trump’s unambiguous statements and actions. Otherwise, the U.S. role will remain open to speculation, and continued uncertainty will further increase tensions.

Any more general escalation of fighting would have unpredictable political repercussions throughout Europe. Ukrainian families have borne the brunt of displacement of 3.8 million people within the country, but their capacity is overstretched. Those displaced internally today could well become the next wave of refugees pushed into Central and Western Europe.

From the Western Balkans to Central Asia, the wider geostrategic shifts are creating insecurity and entrenching positions. Georgia is a good example. Its conflicts have been protracted: the breakaway regions of Abkhazia and South Ossetia have defied Tbilisi’s control for over twenty years, but Moscow’s direct role reached a new level with recognition of their independence in 2008 after the Russian-Georgian war.

Hopes rose that there could be some progress towards reconciliation in the Georgian-Abkhaz and Georgian-Ossetian disputes after the Georgian Dream party overwhelmingly won last autumn’s parliamentary election. The ruling party’s constitutional majority has provided space to advance its long-discussed plan to reach out to the Abkhaz and Ossetians and start addressing divisive issues. Meanwhile, Tbilisi is trying to cope internationally with what it sees as Russian occupation, which Moscow has shown no interest in discontinuing.

Any steps to address local conflict legacies are welcome. Any future settlement must address longstanding grievances in mutually acceptable ways and build bridges between divided societies. But this is only possible if Georgia is securely fixed and supported within a predictable international framework that will help address its own grievances vis-à-vis Russia.

If the Ukrainian and Georgian governments feel that they cannot genuinely trust the West to protect them against Russia, they are likely to become increasingly nervous and unpredictable.  They may also be less willing to invest in reconciliation with those living in breakaway areas, whom they too often see as willing Kremlin proxies.

There is an immediate need for all international actors to prevent the present escalation in eastern Ukraine from getting out of hand and to address the growing humanitarian needs of the affected population. The primary responsibility for this lies with Russia. At the same time, however, the U.S. should join the European Union in giving their partners in the East strong reassurances of firm backing. The West must make clear that it will not compromise on their territorial integrity — nor will it hypocritically say the right things while in fact looking away, which is perhaps more plausible and scarier. With the U.S. course being far from certain, the EU’s confident and undivided support is more important than ever.

If Western backing is solid, Ukraine and Georgia – each with their different conflicts and in different ways – may have the geopolitical space to start addressing existing local divides. This is not a given and would not alone deliver a full-fledged settlement – for that, Moscow would have to change its calculations and course.  But without Western backing, Ukraine and Georgia will find themselves getting ever more deeply enmeshed in insoluble conflicts, with dire consequences for affected populations and increasing risks for security on the continent.