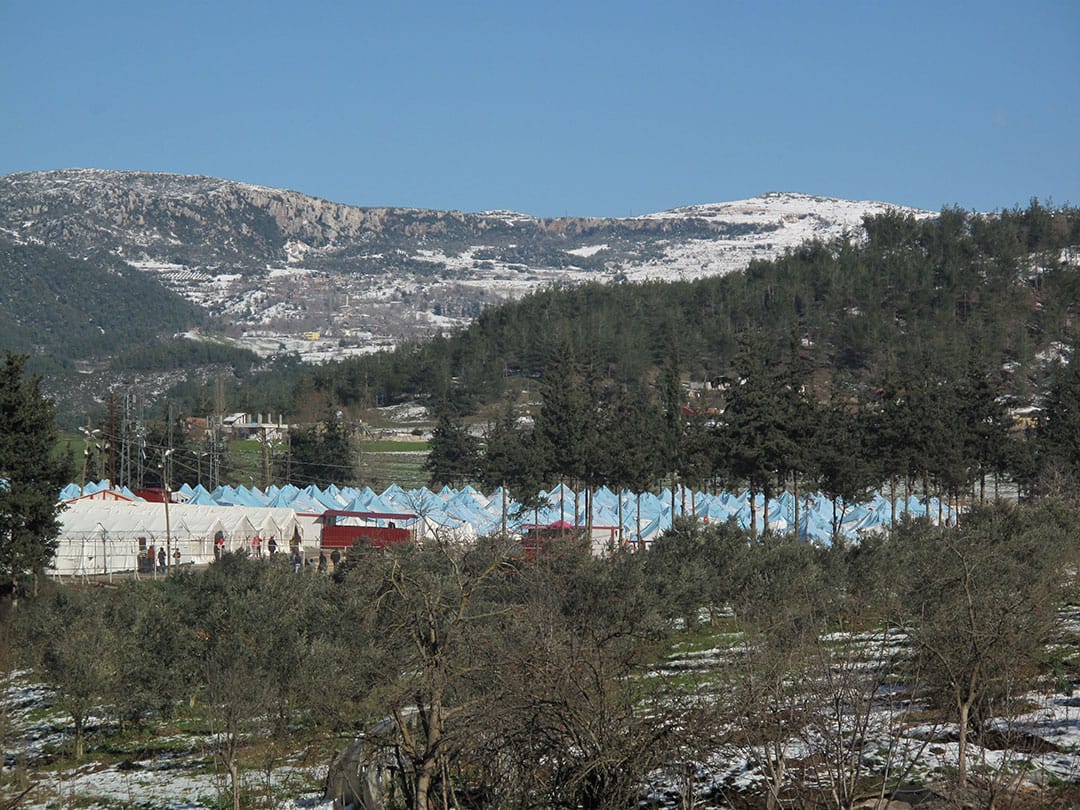 In early January, we spent several days criss-crossing Turkey’s Hatay province on the border with Syria. The visit left us in little doubt that here, at least, Turkey is coping well with the extraordinary inrush of Syrians displaced by the conflict since April 2011. Refugee camps are clean and orderly, people seem in good shape despite many months in tents, and many enjoy a freedom to come and go that is rare in conflict situations. 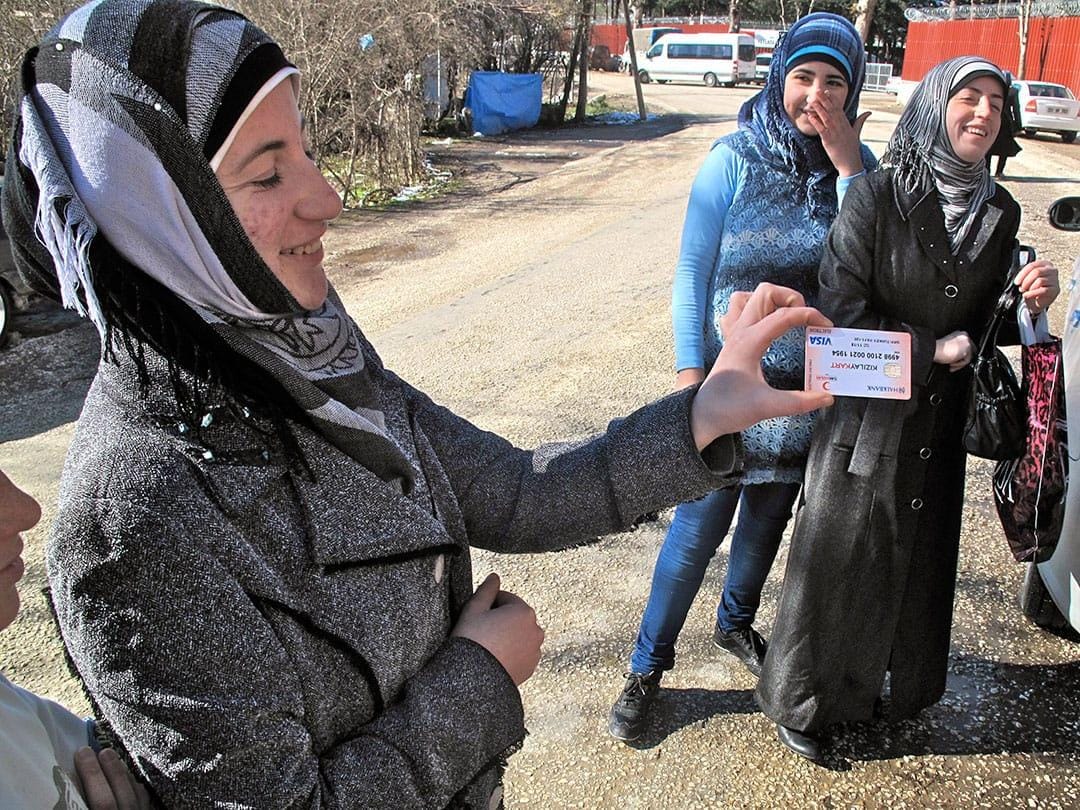 We did not cross the icy passes and snow-capped mountains on the Turkish border into Syria, where the humanitarian situation is much worse. Several Turkish aid agencies are however sending over aid despite the fighting, and are the primary donors for the 14,000 Syrians huddled in the tents of Atmeh camp in Syria, up against the barbed wire of the border. Hot food is served there most days, they say, but the displaced families have no electricity, no heat, no running water, mud sticks to everything, it has snowed and these nights the temperature falls below freezing. Many would like to come to Turkey, but those in Atmeh camp are stuck either because they have no documentation or no money to come on their own, or because Turkey has no more space in its camps. 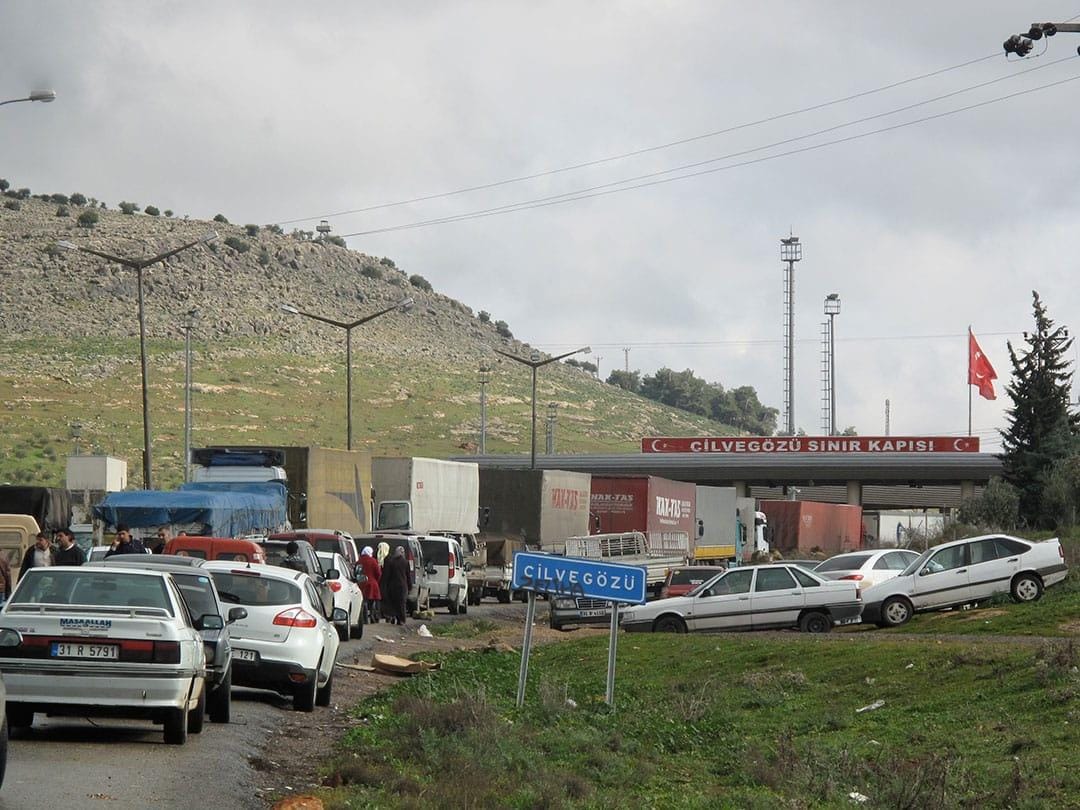 At the Turkish border gate of Cilvegözü, a medley of vehicles from motorbikes to articulated trucks take in a trickle of aid into rebel-held areas of Syria every day. Many are funded by Turkey’s state-run Red Crescent, religious communities or civil society organizations. The goods are unloaded and picked up by Syrian trucks in the barren no-man’s-land between the Turkish border post and the rebel-controlled Syrian side. The representative of the biggest of the aid suppliers – Insani Yardım Vakfı, a pro-Islamic Turkish group that helped launch an international appeal for help in December – says it is able to send flour, conserves, blankets, diapers to 80 per cent of Syria, as far as Deir al-Zor in the far east of the country and even to the outskirts of Damascus.

Small-scale Syrian merchants also queue to cross the Cilvegözü border. The driver of one pick-up had stacked it high with bottled water, cola, refilled cooking gas bottles, diapers, sacks of flour, bags of pulses and boxes of candy bars; he said he was going to sell them in rebel-held villages near central Hama. Other Syrian cars carry families coming back from medical treatment in Turkey and the occasional ambulance brings the bodies of the dead for burial in their homeland. On one main road, a delegation of international Syrian businessmen shepherded several long trucks weighed down with a special mix of flour and yeast to an unofficial border crossing, where it would be transferred to smaller vehicles for distribution through rebel-controlled areas. 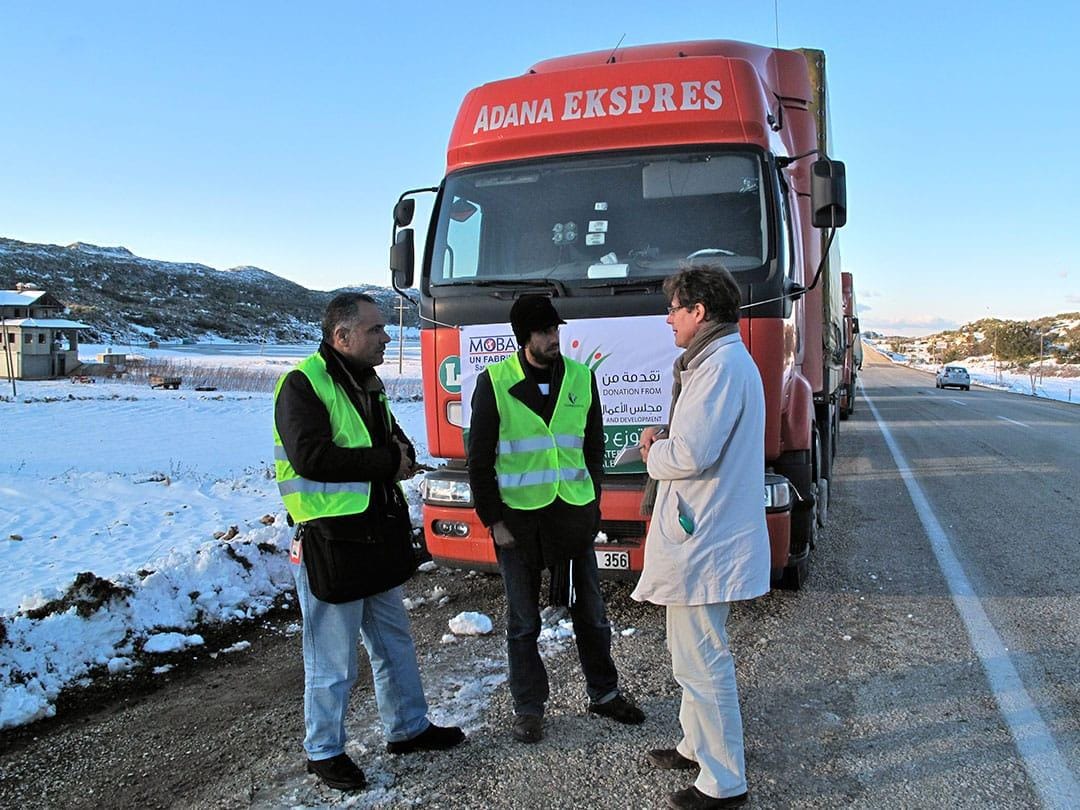 Trucks of flour donated by the Syrian Business Council. CRISIS GROUP/Didem A. Collinsworth

Further south in Hatay province, at the Yayladaǧ border leading to the Syrian city of Lattakia, Syrian government troops still hold the border post. The crossing point is also open, although customs agents say that only a dozen cars go through each day, drastically down from the hundreds that used to cross before the Syria conflict broke out. Remarkably, Ankara has maintained a visa-free crossing system to both rebels and the government, despite Turkey’s public backing of the Syrian opposition.

Much also goes on at unofficial gaps in the border wire. Indeed the rebels, often bearded, partly in camouflage uniform and with muddy boots from crossing over the snowy mountain tracks, are everywhere in border towns. They buy supplies like flour and chickens from markets, visit relatives in camps and enjoy what some fighters say is their regular four-days-per-month break from the fighting. The mayor of Yayladaǧ says around 2,000 FSA fighters and their families are wandering about the small town of 6,000 on any given day. No weapons can be seen, apparently having been left with the fighters’ units in Syria; their first complaint is invariably that Turkey is not giving them enough military support. 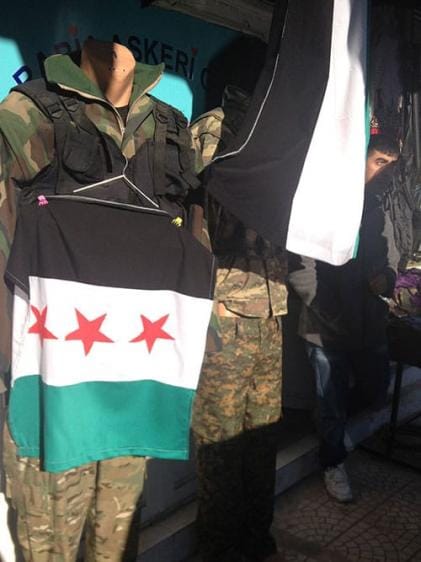 Still, Turkey’s relatively open-door policy seems to work, even if this independent stance has cost the country perhaps 500 million dollars already and will be hard to sustain. (EU and U.S. officials say that they can only directly fund agencies or NGOs that they have accredited and meet their stringent reporting and audit requirements. No Turkish groups fall in this category and Turkey is not allowing international or non-Turkish Red Crescent organizations to work in the camps either, a rule officials say is to maintain uniform standards throughout the camps. Turkey also officially describes the refugees as temporary “guests”, apparently for fear of losing control, creating a long-term refugee population with greater rights and triggering a massive new inrush of Syrians.)

Still, the official tent camps in Hatay are highly organised. Camp families are given pre-paid electronic cash cards funded by the World Food Program that allow them to buy about $50 of food per person per month from the local stores. Shop owners are pleased, and while the Syrians complain that the locals overcharge them, they say they still prefer buying their own food and supplies to eating government-provided meals in the camps. 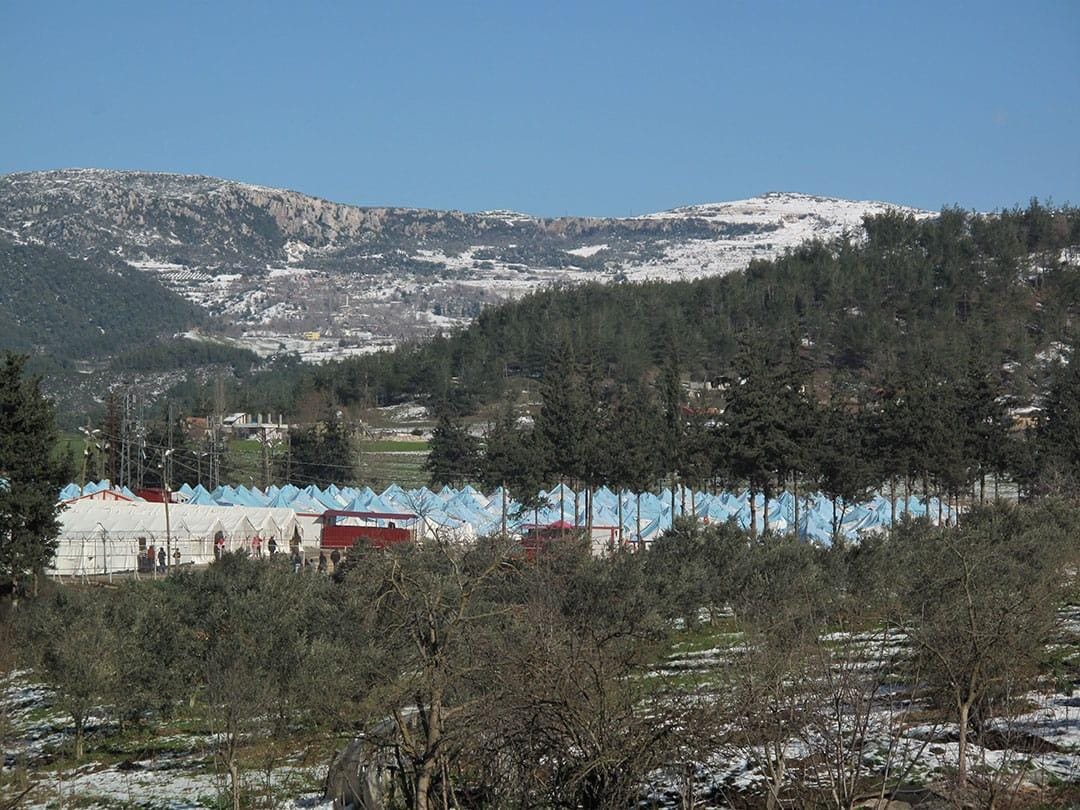 Those Syrians with their own money, or able to rely on remittances from relatives elsewhere, live in rented accommodation and even unofficially find work. Refugees we met all said that, among the 800,000 Syrians the UN says have been forced out of their country by the conflict by early January, they feel better off than most in Jordan, Lebanon and Iraq. Some Syrians even seem well-off, touting iPhones and patronizing Hatay’s legendary sweet künefe pastry shops. Others are increasingly struggling, welcoming help from local Turkish associations and persons who provide limited assistance to those in private lodgings. In the remote mountain town of Yayladaǧ, a cheerful muhtar (the locally elected district headman) says that over 500 illegal Syrians living in the small town have tripled rent prices and even caused a shortage of housing. Doubling as a fruit vendor, he has taken the twelve year old Syrian refugee under his wing and helps her family pay rent for their one-bedroom apartment housing fourteen people. 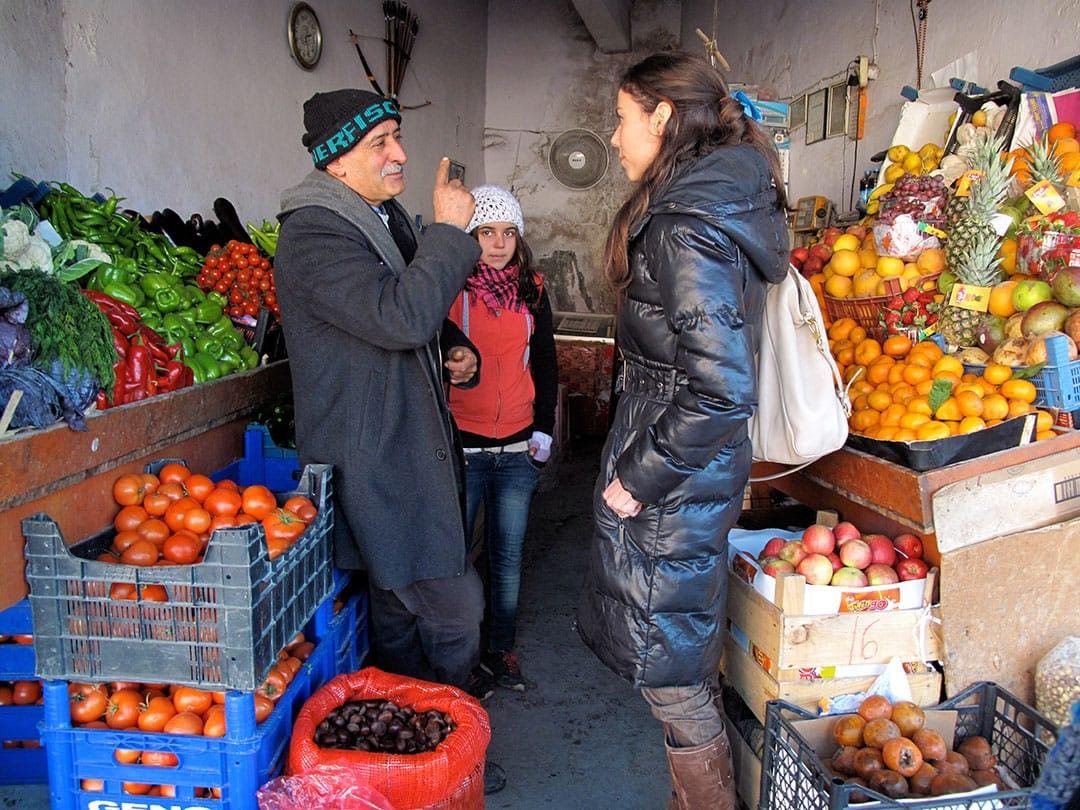 Local people in the ancient city Antakya – a mixture of Sunnis and Arab Alevis sprinkled with Orthodox Christians, Armenians and Jews – have largely weathered, at least thus far, the social and economic impact of the crisis. Some do harbour mixed and even hostile feelings towards the Syrians who flooded into the camps of Hatay, about 13,000 of a total 154,000 Syrians in camps all along the 900 km border. Nobody knows the total of those living unofficially in Turkey, but estimates start at another 50,000. In the Turkish-Syrian border town of Reyhanlı alone, the mayor says the city’s infrastructure must now serve 30,000 Syrians who have joined the pre-existing population of 60,000. But the town still operates normally. Syrians have set up hospitals to care for the wounded, and to a limited extent started restaurants and set up schools. 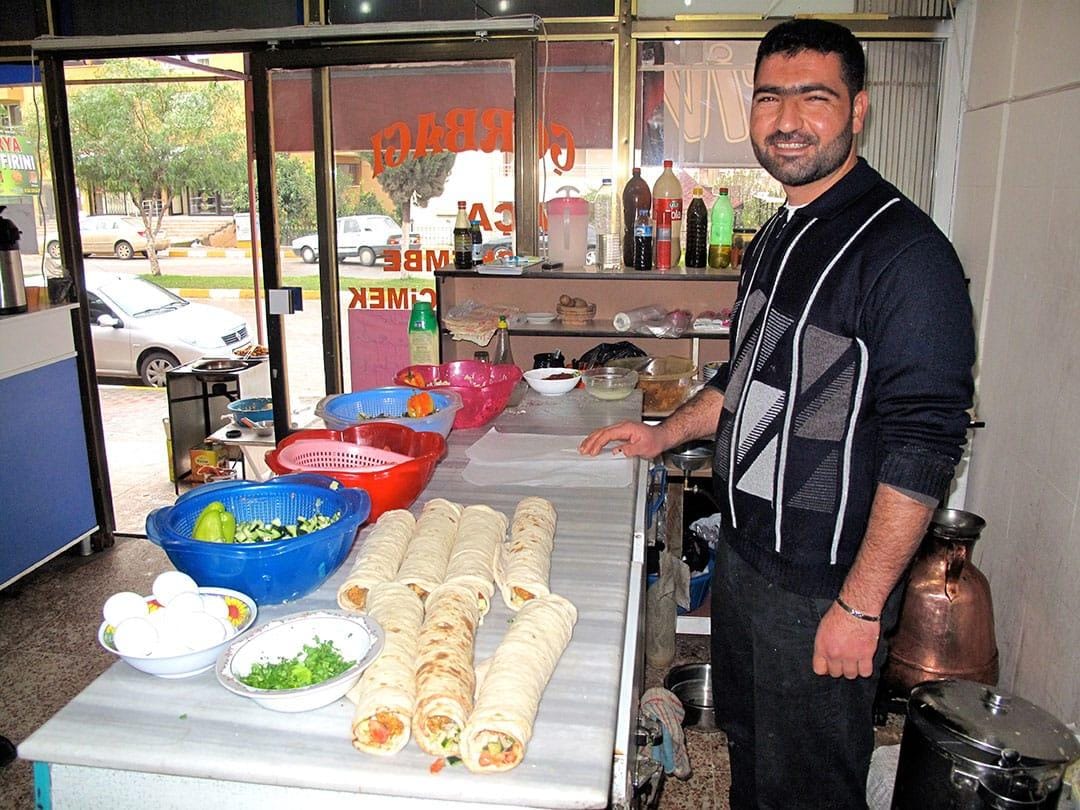 Turkish businesses however have had to adapt sharply to the loss of Syrian markets and transport routes, and there are sometimes frictions between the populations and complaints on both sides. In the provincial capital, Antakya, in September 2012, local people, largely Arab Alevi relatives of Syria’s Alawites across the border, mounted a big demonstration against the growing numbers of Syrians and off-duty FSA fighters, almost all of whom are Sunni Muslims. The Turkish government quietly moved some refugees on to Sunni-majority provinces, and the FSA fighters lowered their profile.

All sides agree that, for now at least, sectarian tensions have abated – and that a widely believed rumour that the governor of Antakya ordered the FSA men to shave off their beards is just another of many new urban legends.