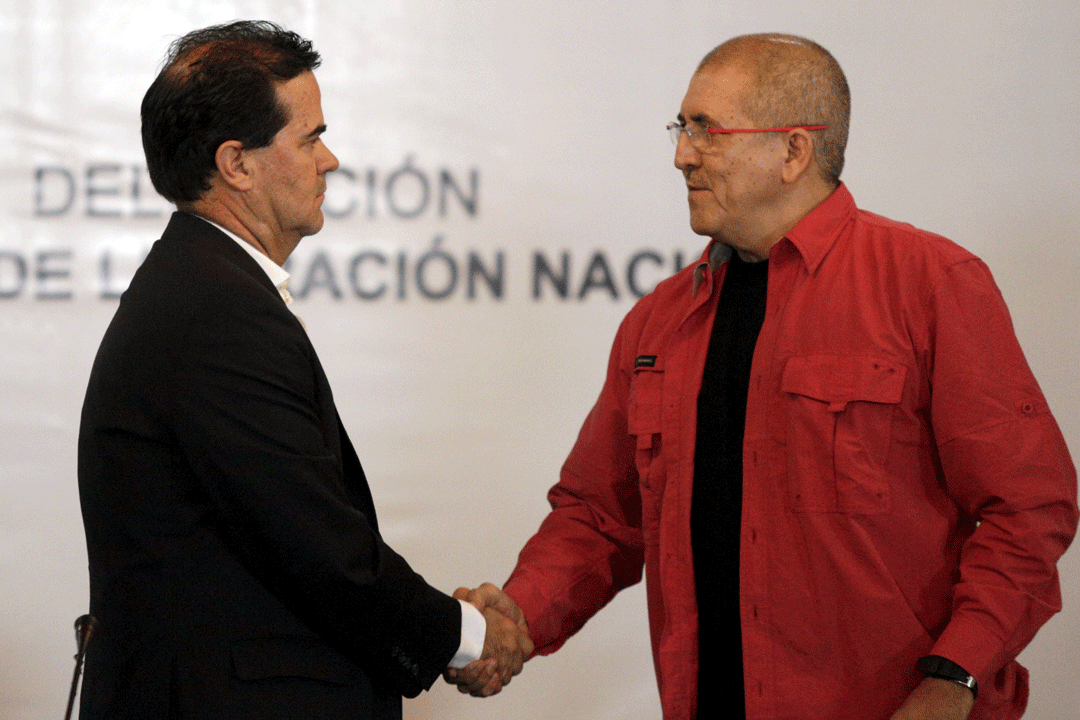 The Colombian government announced on 30 March the beginning of the formal phase of peace negotiations with the National Liberation Army (ELN), the second largest guerrilla group in Colombia. These talks, together with those nearing completion with the Revolutionary Armed Forces of Colombia (FARC) in Havana, are the country’s greatest opportunity yet to end 52 years of armed conflict. But how different will this peace process be compared to the one with the FARC? What lessons can be learned from the latter, and what incentives do ELN leaders have to achieve a substantive agreement? In this Q&A, Crisis Group’s Colombia Senior Analyst Kyle Johnson explains why the history of the ELN and its horizontal political structure make it such a unique negotiating actor.

How would you describe the ELN as a group, and where does it operate?

The ELN is a leftist guerrilla group founded in 1964 that operates mostly on the Colombia/Venezuelan border, where it controls many informal border crossings. It is also present along the Pacific coast and in north-central Colombia. It is involved in illegal economic activities such as kidnapping, extortion, illegal mining and drug trafficking. Its principal strategy is to carry out “armed resistance” against what it terms the oligarchies from Bogotá and multinational corporations that want to extract or exploit Colombian natural resources without supporting local communities. The group has about 2,000 fighters, but its real strength comes from unarmed activists and communities who are somehow connected with the ELN. It is a very horizontal organisation and it makes decisions based on internal consensus.

That’s a common way to explain how different the two groups are. The FARC has a vertical hierarchy, with a leader heading a seven-person Secretariat and a somewhat larger High Command, and it has long prioritised military tactics over politics, without completely ignoring the latter. The ELN, by contrast, has high-level decision-making bodies, which make decisions based on consensus, and below them, everyone at a certain level gets an equal voice. The ELN sees political action as the best way to strengthen the organisation. It also sees political action as a way of strengthening their military side. For three decades, the ELN has focused on building local “popular power”, while the FARC has aimed to take power in Bogotá. Also, the FARC is larger, with close to 8,000 fighters and perhaps 20,000 militia members, and it controls more territory. Despite their differences, both groups have had a good enough relationship historically. However, there were costly military confrontations between them between 2006 and 2010.

Why did the FARC enter into peace negotiations with the Colombian government before the ELN?

Policies toward the FARC – whether to pursue its defeat or make peace with it – have been a central factor in the election of almost every Colombian president since the 1980s. The current government was no exception. Benefitting from the weakening of guerrilla forces by the military campaign pursued by President Álvaro Uribe (2002-2010) yet recognising the state’s inability to secure an end to the armed conflict by military means alone, President Juan Manuel Santos has pursued negotiations with both groups, but with priority given to the FARC process.

This focus makes sense. FARC has inflicted the most political pain on Colombia’s central government, and in the past has been perceived as threatening to take over the country. Whether that is true or not, the existence of this perception is important. Nobody has ever thought that the ELN could seize the capital.

Meanwhile, although both the FARC and ELN have realised they will not win the war, their response to this new awareness has been quite different. The FARC, which experienced a generational shift in its leadership after the death of its founder, Manuel Marulanda, in 2008, made a strategic decision to negotiate. The ELN adjusted its strategy to one of “armed resistance” on a local level, where winning the war is no longer the goal, and so peace negotiations were not as necessary from their perspective. Also, while the FARC seized the opportunity presented by Santos’ determined pursuit of a negotiated solution, the ELN saw Santos as just another member of Colombia’s oligarchy: they argued nothing had changed politically in Colombia and therefore negotiations were not justified.

It took six months for the Colombian government and the FARC to work out a peace agenda, while with the ELN, the same process lasted almost three years. Why so?

The FARC’s clear decision to pursue negotiations meant that in many respects the process was simpler with the FARC. It was a question of agreeing to the points to be discussed, the right language to define the issues and a methodology. Also, it was fairly clear which issues were important to the FARC and where common ground could be found. The group was ready and had the political will to quickly define an agenda and take important early steps like ending economically-motivated kidnappings. The ELN, on the other hand, took almost two years just to arrive at a very weak and fragile internal consensus that negotiations with the government were a good idea.

Talks with the ELN are scheduled to begin at the end of May in Ecuador. President Santos, though, has stated that dialogue will not begin until the ELN stops kidnapping and releases all its kidnap victims. The group has rejected this demand stating that the government should not set conditions for the negotiations, putting this starting date somewhat in doubt.

What incentive does the ELN have to make peace right now?

The ELN has three main incentives to negotiate peace. First, it may simply not get another opportunity for talks in the near future. Second, without the FARC in the picture, the group may not be able to survive a government military offensive. And finally, as the country moves forward with the FARC in a post-conflict arrangement, the ELN risks becoming politically irrelevant. Time is also pressing. The ELN effectively only has until 2018, when the mandate of the Santos government ends, to sign or come close to reaching a peace agreement.

Have there been many attempts by the ELN to negotiate the end of the conflict?

Indeed, there have been many failed attempts to negotiate peace with the ELN, which, because of its relative openness, was often assumed to be a potentially easier negotiating partner than the FARC. The first one started in 1985, when some of the group’s units agreed to a ceasefire with the government, but nothing more was achieved. Later, in 1987, the government negotiated with six guerrilla groups, including the ELN, united under the umbrella of the Simón Bolívar Guerrilla Coordinating Group. But the ELN was very resistant to negotiations, so they missed this opportunity. There were three more attempts in the 1990s: the first one in 1991-92, when the two sides held talks in Venezuela and Mexico, which eventually fell apart; the second in 1994, when a dissident group of the ELN was able to negotiate with the government and join Colombian civil society; and then in the late 90s, there were some attempts at negotiations in Spain and Germany.

Later in the decade and at the beginning of the 2000s, the ELN pushed again for talks with the Colombian government. Those talks never took place because of pressure in Colombia from right-wing political elements including paramilitaries. The last attempt was between 2004-2007 with the government of Uribe, but although they met in Cuba they were not even able to define an agenda. All of these attempts should however be seen as rounds of exploratory talks. Therefore, it is good news that now we finally have a defined agenda that will be formally discussed.

How engaged is Colombian society with the ELN peace process?

One of the agenda points in the ELN peace process is societal participation, and there we will see just how much society at large is engaged beyond the local, rural level at which the ELN operates. In Colombian urban society, little is known about the ELN. An average person from Bogotá or Medellín has not been as exposed to conflict as other parts of the country. For such people, peace is important but it won’t affect their day-to-day lives. In the countryside, where the ELN operates, it’s a very different story. It is hard to imagine how someone from a small community on the border with Venezuela would believe that he/she is in a post-conflict situation because there is an agreement with the FARC, if at the same time there are clashes taking place with the ELN a few kilometres away from their house.

Do you think the talks with the ELN will succeed?

In order for the talks with the ELN to succeed, they will have to overcome some serious challenges. First, the agenda to be discussed is quite broad and imprecise. It is unclear exactly what will be discussed, and how, and the details that can help guide the negotiations are in general missing. The peace talks with the ELN do not have the political importance as do those with the FARC, so they will not be able to withstand as much political pressure if things are not going well. The ELN also has credibility issues, especially regarding the issue of kidnapping. The failure to declare an end to kidnapping weakens the political strength of the talks from the outset, and undermines the ELN’s legitimacy in Colombian society as a whole.

Finally, there is a clear time constraint as Santos will be president of Colombia until 2018, but there is no guarantee right now that the next Colombian president will continue talks with the group. Electoral dynamics in Colombia mean that the talks will have to have advanced quite a bit by mid-2017, simply because time will be running out. Even so, it is too late for the ELN talks to catch up with the talks with the FARC; preliminary talks took almost three years, and it is hard to imagine formal talks going rapidly.

Peace deals with the two groups are therefore unlikely to be reached at the same time. Nonetheless, Colombia’s chances to have a sustainable peace-building process and end its half-century of armed conflict are much improved by the negotiations with the ELN. Despite the challenges, the prospect of signing agreements with both the FARC and ELN heralds great changes for this South American nation.

Launch event of Crisis Group’s report Trapped in Conflict: Reforming Military Strategy to Save Lives in Colombia, based on extensive fieldwork in different regions of Colombia and dozens of interviews with the military and communities. It was held in Bogotá on Tuesday 27 September 2022 at 8:30 am. In the report, Crisis Group analyses why military strategy in Colombia’s rural areas has failed to contain the conflicts that arose following the 2016 peace accord with its largest guerrilla movement (FARC). Crisis Group also proposes new civilian government leaders to prioritise community protection in rural areas and embrace new indicators for gauging the military’s success. The panel was composed of Martha Maya, Latin America Program Director at the Institute for Integrated Transitions (IFI), Elizabeth Dickinson, Crisis Group's Senior Analyst for Colombia, and Ivan Briscoe, Crisis Group's Director for Latin America and the Caribbean. Alberto Lara Losada couldn't attend.