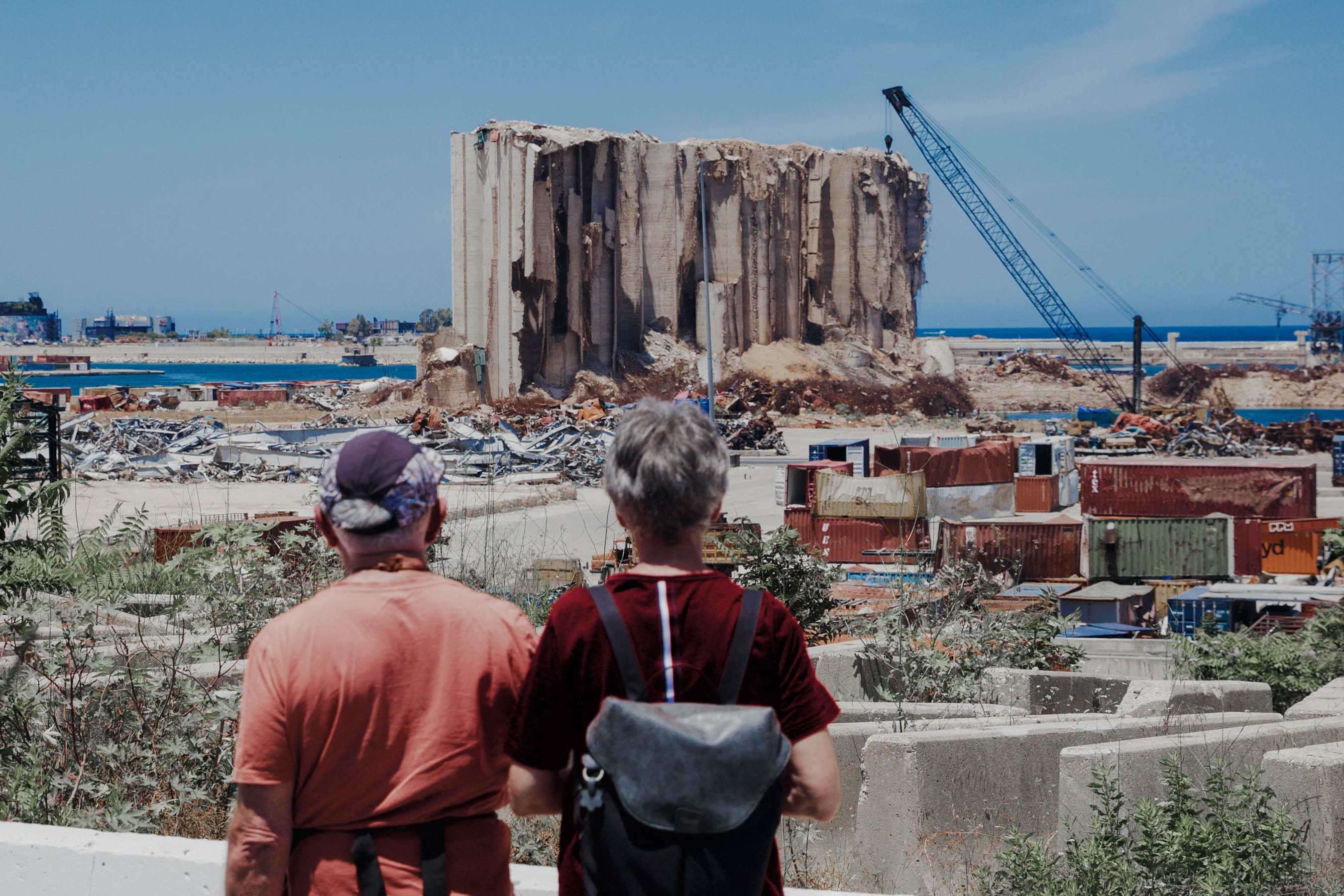 On 4 August 2021, the Lebanese will commemorate the first anniversary of the terrible blast in the port of Beirut. Laurent Perpigna Iban / Hans Lucas via AFP.
Commentary / Middle East & North Africa 04 August 2021

Picking Up the Pieces One Year After the Beirut Port Blast

The enormous explosion that ripped through Lebanon’s capital one year ago left deep socio-economic and political damage as well as physical devastation. The challenge today is not only to rebuild but also to establish accountability for the disaster and ensure better governance in the future.

The glass carpeting the streets of central Beirut on 4 August 2020 was not the only thing the port blast shattered. It decimated livelihoods, tore the city’s social fabric and broke whatever tenuous trust people still had in the political elite. One year later, the broken glass has been swept off Beirut’s streets, but little else has been fixed. The country faces an economic crisis that the World Bank describes as one of the worst in modern history. A nine-month effort by former Prime Minister Saad Hariri to form a government collapsed in mid-July, and the lack of a functioning government has impeded efforts to negotiate a much-needed International Monetary Fund stabilisation program. Mechanisms to create some measure of accountability for the devastating incident are foundering. Against this backdrop, Beirut’s reconstruction has not meaningfully progressed, beyond a handful of proposals from outside actors who seem to have no clear sense of the city’s needs. These three challenges – governance, accountability and reconstruction – must be tackled together if the city and the country are to pull themselves out of their morass.

For now, the immense and immediate storm of economic collapse, hyperinflation and political deadlock that Lebanon faces dwarfs all other issues. Without a government to formulate a coherent strategy or the political will to form one, any initiative by the Lebanese state to reconstruct Beirut or its port is unthinkable. International institutions are unwilling to disburse funds beyond immediate humanitarian relief and recovery needs without meaningful political reform. The response framework and financing strategy launched by the World Bank, European Union and UN in December 2020 demands substantial systemic change and a government to deliver on recovery and reconstruction – both of which appear a distant hope. While private companies from various countries have expressed their interest in rebuilding Beirut’s port, Lebanon’s political, economic and financial collapse does not make it a welcome investment environment for private-sector enterprises.

One year after the port explosion shattered Beirut’s centre, the search for accountability is ... stalling.

One year after the port explosion shattered Beirut’s centre, the search for accountability is also stalling. Despite government promises to shed light on the causes of the blast and hold those responsible to account, politicians have done little more than trade accusations. A domestic investigation launched days after the explosion has raised more questions about its lack of transparency and political interference than it has provided answers about the blast. While the new lead judge has requested lifting the immunity of several high-ranking politicians, the elites in power are closing ranks to protect a system that is dysfunctional in all ways but preserving their own interests.

As for reconstruction, with the political elites responsible for forming a government unable to overcome their inertia, it has fallen to ordinary Lebanese to pick up the pieces of their broken city. The blast not only destroyed vital infrastructure, leaving the port at one fifth of its normal capacity to import wheat and grains and damaging nine out of Beirut’s sixteen operating hospitals, it also razed homes, shuttered businesses and crushed much of the city’s soul. The city’s woes have been compounded by the country’s economic collapse and the shortages that flow from it. An average two to three hours of electricity a day plunge the country into darkness, as shortages and prohibitive fuel prices silence the whir of the generators on which many rely to make up for Lebanon’s failing electricity provision. With pharmacies and hospitals lacking basic medicines, the lucky Lebanese with families abroad depend on periodic care packages in the form of suitcases filled with pills and sanitary products. There is no question that to restore Beirut’s life and Beirutis’ livelihoods, urban reconstruction is imperative. The question is how to go about it.

Beirut’s urban landscape is a mirror of its multicultural society – and of its sectarian and socio-economic divisions. Sectarian symbols demarcate neighbourhoods, announcing political party affiliation and religious identity, and reproducing a divided society in a divided cityscape. The stark contrast between Bourj Hammoud’s working-class settlements and downtown Beirut’s glitzy streets and shopping malls exposes another divide – between rich and poor – that exists on a larger scale throughout the city. In Beirut, urban space is political; how it is reconstructed matters.

Here, there are lessons to learn from the past. The city is no stranger to large-scale urban reconstruction. While the civil war (1975-1990) destroyed much of Beirut’s urban and social fabric in addition to the city itself, the plan to rebuild it tore up what little remained. Post-war reconstruction was handled under an exclusive mandate awarded to the construction company Solidère, founded by then-Prime Minister Rafiq al-Hariri, which was mired in allegations of corruption. Solidère’s project to create a commercial centre and tourist hub dispossessed thousands of people and erected socio-economic barriers to the high-end retail and business facilities dominating the area. The project further entrenched social divisions and highlighted the stark difference between government priorities and the people’s needs.

It is imperative that the city’s rebuilding today does not reproduce the mismanaged reconstruction that followed the civil war.

It is imperative that the city’s rebuilding today does not reproduce the mismanaged reconstruction that followed the civil war. So far, the only concrete proposal, put forward by German construction companies, risks doing just that by focusing on high-end real estate. Instead, reconstruction plans should be informed by the needs of all of Beirut’s residents and prioritise giving local businesses the opportunity to revitalise an economy decimated by the blast, COVID-19 lockdowns and hyperinflation. These plans should allow the local population to participate in development. Most importantly, they must create spaces of inclusion rather than exclusion by enabling residents, business owners and workers to return to and rehabilitate their neighbourhoods, creating shared public spaces and preserving the social fabric of the affected areas.

In the face of the country’s slide toward collapse, many young Beirutis and others across the country are confronted with the question their parents faced a generation ago: to stay or to leave? Many with the financial means or networks to do so have already chosen to emigrate. For those who stay, things may well get worse before they get better. The city’s fate cannot be divorced from broader challenges that, so far, the country’s leaders show no signs of meeting. To place its future on a solid foundation, Lebanon’s political elites will need to come together in a government that can deliver political and economic reform and win the trust of international partners and investors. They will also need to ensure that those who bear responsibility for the explosion and the country’s literal and metaphorical collapse are held accountable. Finally, they will need to avoid the mistakes of past reconstruction efforts, so that when rebuilding eventually takes place, it prioritises the Lebanese people.

How Europe Can Help Lebanon Overcome Its Economic Implosion