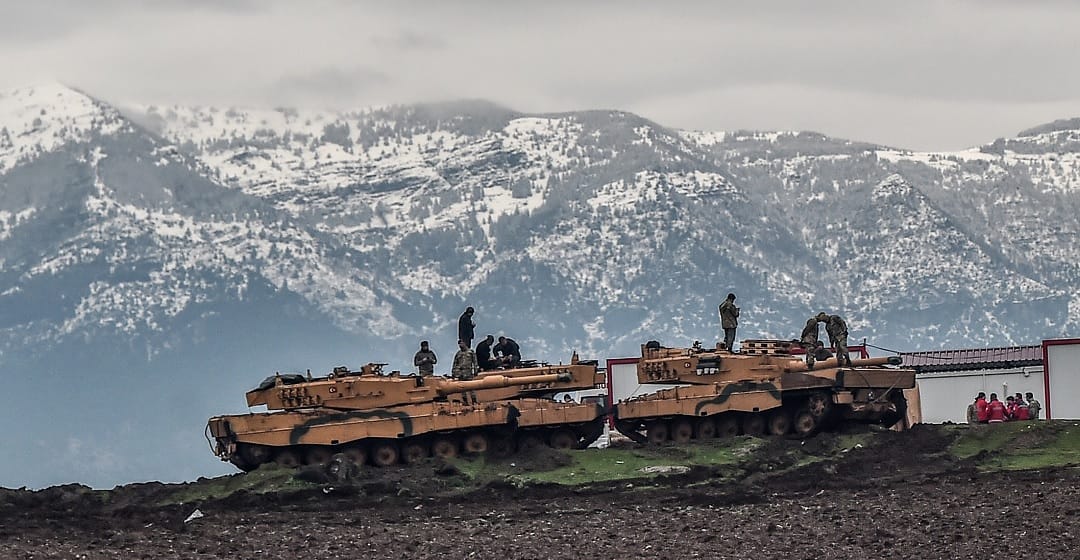 No Winners in Turkey’s New Offensive into Syria

No victor is likely in costly new battles between Turkey and Syrian Kurdish forces in north-western Syria. Difficulties faced by Turkish troops include a hostile population and hilly territory that favours its battle-hardened insurgent foes, and the offensive puts new stress on Turkey’s already strained relationship with its main strategic ally, the U.S.

A Turkish attack on the Kurdish “People’s Protection Units” (YPG), the Syrian affiliate of the Kurdistan Workers’ Party (PKK), was long expected. For most observers, the question was not if, but when, where, and under what circumstances.

Now we have the answers: seizing on an inflammatory (and subsequently amended) U.S. statement concerning Washington’s cooperation with the YPG-led Syrian Democratic Forces (SDF), Turkey has launched an aerial and ground offensive against the YPG-held enclave of Afrin in north-west Syria.

The battle is likely to prove indecisive and costly for both sides. It is already a tremendous headache for Washington, their mutual ally, and putting huge strain on North Atlantic Treaty Organisation (NATO)-member Turkey’s relations with the U.S. Unless all involved adjust their strategies, including a return to a broader peace process in the PKK’s decades-old insurgency in Turkey, it may also prove a sign of worse to come.

It has long been clear that the conclusion of major U.S.-backed offensives against the Islamic State (ISIS) would prove a sensitive moment in northern Syria. Ankara, furious since 2015 that U.S. backing has empowered the YPG as the military backbone of the SDF even as the PKK wages active insurgency in Turkey, hoped that its NATO ally would wind down support for the SDF following the capture of ISIS strongholds.

Washington appears to have decided to do quite the opposite: to stay and continue to invest in its partners on the ground. The U.S. views the “stabilisation” of areas captured from ISIS as essential to prevent jihadist resurgence; does not want to abandon a reliable ally in the fight against ISIS to regime assault; and hopes to leverage its military presence to promote a political transition in Damascus and contain Iranian influence. The YPG’s coherent internal structures, efficient decision-making and capable performance make it the U.S.’ only plausible local counterpart for maintaining security and delivering governance. There is little reason to believe that the SDF and local bodies could hold up without it.

The U.S. made its intentions public on 11 January 2018 in a testimony by Assistant Secretary of State David Satterfield, and in Secretary of State Rex Tillerson’s speech six days later. It was this statement of policy, rather than the poorly-conceived 13 January U.S. statement about building “border security forces”, that heightened Turkey’s frustration. Ankara strongly opposes continued U.S. support for the YPG, which it sees as enabling the PKK to consolidate and legitimise its affiliate’s de facto rule along a large part of its southern border, bestowing diplomatic clout and respectability on the mother organisation in the process.

In response, Ankara has launched its most significant action yet against the YPG, in the one place it can do so without directly confronting its NATO ally: Afrin. The U.S. has no military presence in this geographically isolated YPG-held canton in north-west Syria, which Washington has always described as outside the framework of its counter-ISIS efforts.

Unprotected by the U.S. security umbrella in northern Syria, Afrin is an easier target for Turkey than SDF-held territory to the east. It is Moscow, not Washington, that had previously provided some degree of implicit protection for the area. Russia dominates the airspace over that part of Syria, and has maintained a small military presence in Afrin. Its approval (or at least acquiescence) was widely perceived as a prerequisite for any major Turkish operation there. Indeed, Turkish intelligence head Hakan Fidan and Chief of the General Staff Hulusi Akar visited Moscow immediately prior to the offensive. After the visit, Russia acknowledged Turkey’s security concerns, blamed the crisis on U.S. “unilateral action” (an apparent reference to the policy announced by Tillerson), and moved its troops in Afrin out of harm’s way. For now, this decision has severely damaged its previously cordial relations with the YPG but for Moscow that apparently was a small price to pay: proving the U.S.’ unreliability and, by contrast, Russia’s ability to control events on the ground in tandem with Turkey, was of greater value.

Militarily, however, Afrin presents particularly challenging terrain for Turkey. The YPG has both military control and deep local roots. Unlike most of the SDF-held north east, Afrin is wooded, partially mountainous and densely populated. And while the YPG is surrounded by rival forces – Turkey to the west and north, Turkey-backed rebels to the east, the Syrian regime to the south east and the jihadists of Hei’at Tahrir al-Sham to the south – a road connects Afrin to SDF-held territory in the north east via regime-held areas; the YPG may be able to negotiate with Damascus use of that road to transport reinforcements.

Things could get especially messy if Turkey expands operations to Manbij.

Turkey and its rebel allies, who at times struggled to gain ground during their “Euphrates Shield” offensive against ISIS in late 2016 and early 2017, are likely to find the going much tougher against the better-trained, better-led YPG. Even if they seize the enclave, it remains unclear how Ankara hopes to secure an area inhabited by a hostile population and with a topography suitable for guerrilla warfare. More likely, Turkey will end up in a prolonged fight against a potent, deeply-motivated insurgency.

Things could get especially messy if Turkey expands operations to Manbij, a city at the western edge of the SDF’s north-eastern territory, which President Erdoğan has suggested could be Ankara’s next target. Manbij is sensitive, disputed territory. The U.S. helped the SDF seize it from ISIS in 2016, and assured Turkey that the YPG would withdraw from the city and adjacent areas west of the Euphrates River following their capture. In practice, however, the YPG has retained control there via local partners. Washington, aware that its pledge was not fully implemented, has on some occasions deployed its own forces to the area to deter Turkish attack. If Ankara decides to extend its current offensive there, it will broaden its exposure to YPG insurgency and risk far deeper damage to its relationship with Washington, as U.S. and Turkish forces could collide.

The Afrin offensive may boost temporarily the Turkish leadership at home. But it entails major risks and is unlikely to significantly weaken the YPG overall. The attack may even encourage the PKK to revert to bombings in Turkish cities – a tactic the organisation has shied away from over the past year (likely due in part to Washington’s exhortations, delivered via the YPG). This fight is unlikely to end well for anyone, and it highlights the urgency of addressing the Turkey-PKK/YPG conflict – and the associated contradictions of U.S. policy – more constructively.

Ankara has largely routed the PKK in the three years of fighting in south-eastern Turkey that have followed the breakdown of peace efforts in 2015. However, it did so at great human cost. The PKK is still confident in its northern Iraq headquarters, and Turkey faces much bleaker prospects – and formidable geopolitical constraints – inside Syria. Turkey can mount damaging attacks against and destabilise YPG-held areas, but it has no discernible path to military victory there.

For its part, the PKK has lost “a generation” of fighters (as one of its cadres told Crisis Group) in combat that has arguably strengthened its adversaries politically. It has no reason to expect better results from future insurgent campaigns in Turkey. It can take heart in the continued success of its Syrian affiliate, which has brighter political and military prospects – but, as Crisis Group reported in May 2017, that depends on it finding sustainable means of averting prolonged Turkish attack.

Rather than costly pursuits of quixotic objectives where their respective hands are weaker, Turkey and the PKK/YPG would be better served by a quid pro quo: PKK military concessions in Turkey (eg, an immediate ceasefire and withdrawal of arms from Turkish soil) in exchange for Ankara’s returning to the peace process and acquiescence to continued YPG control within much of northern Syria.

The obstacles are formidable, but not insurmountable. Even as U.S. officials shuttle between their warring allies in an attempt to contain the fighting, they should begin exploring the potential for an eventual deal in which the PKK makes concessions on one side of the border in exchange for a compromise from Turkey on the other. Without such an understanding, Washington’s new approach to Syria will end up harming both its allies whose cooperation it needs if it is to play a role in settling Syria’s war.