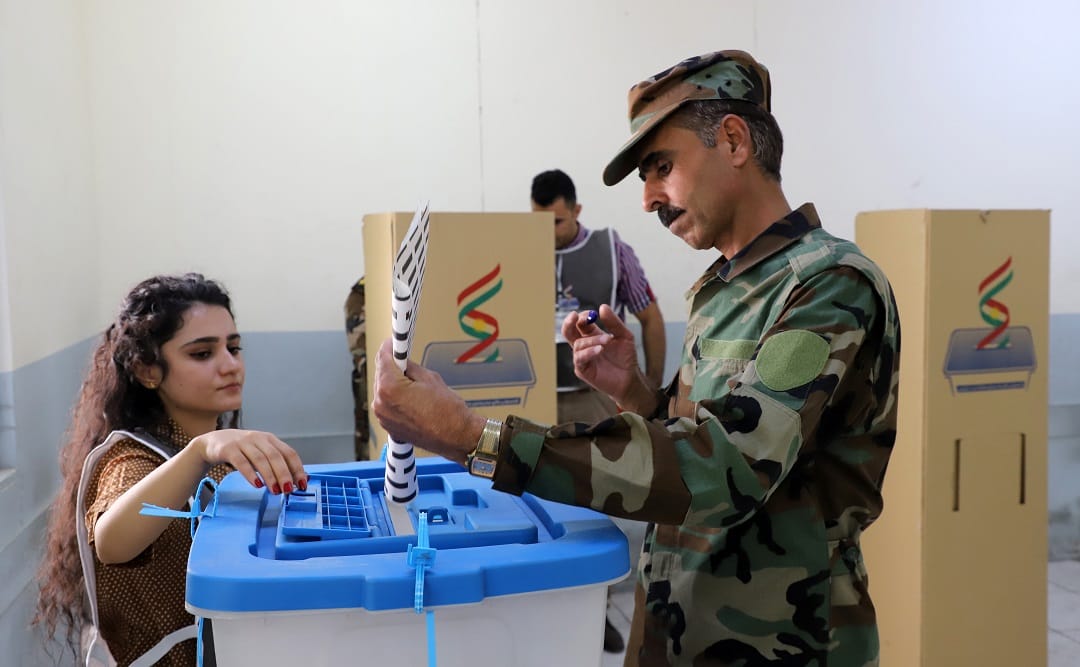 The fallout continues to settle after Iraqi Kurdistan’s fraught independence referendum one year ago. In this Q&A, our Iraq Senior Adviser Maria Fantappie surveys the political landscape ahead of the first regional legislative elections since the plebiscite.

What’s at stake in the 30 September elections?

Voters in the Kurdistan Region of Iraq will choose the 111 members of the Kurdistan National Assembly, in the fourth election since the body was founded in 1992 and the first since the Kurdish independence referendum on 25 September 2017. At stake, as usual, is the equilibrium between Iraqi Kurdistan’s dominant political parties – the Kurdistan Democratic Party (KDP) and Patriotic Union of Kurdistan (PUK). This time, however, the fate of the PUK also hangs in the balance, as it faces a challenge from opposition rivals, the Gorran and New Generation movements.

At issue is also the relationship of the Kurdish region’s institutions – the Assembly, the judiciary and the executive, including the presidency – to the KDP and PUK. These institutions have long been dependent on the twin parties, and as long as that remains the case, elections not only shift the balance of power between the two but also transform these institutions’ role in the region’s political system.

The main parties’ duopoly is buffeted by the shock waves of the backlash to the 2017 referendum.

The main parties’ duopoly is also now buffeted by the shock waves of the backlash to the 2017 referendum, in which more than 90 per cent of participants voted for independence from Iraq. In response, the Iraqi government sent its troops into oil-rich Kirkuk and other disputed territories – lands claimed by both Baghdad and the Kurdistan regional government – which the Kurdish parties’ security forces had previously controlled. The territorial losses pitted the KDP and PUK against each other and divided each party internally.

Yet, all things considered, the KDP and PUK remain indispensable to one another, and the KDP in particular is still a favourite in the 30 September contest.

Who are the main parties competing, and how cohesive are they?

Old and new players are competing. Though it was mainly responsible for the referendum and the backlash it provoked, the KDP has weathered its internal disputes well. Masoud Barzani, who served as the region’s president from 2005 to 2017 and remains KDP leader, has used the proven method of managing divisions between senior party members within its family-based structure by assigning them to security and administrative posts. The KDP has no major competitors in its territorial strongholds, the Erbil and Dohuk provinces, and holds its own against the PUK in Suleimaniya province. In the elections, the KDP aspires to strengthen its grip on the regional government, reverse the political and territorial losses of 2017, and lead the Kurdish region out of the post-referendum crisis.

The PUK, on the other hand, has faced serious difficulties in containing its divisions. After its co-founder Jalal Talabani died in 2017, about a week after the referendum, the party has lacked a unifying figure. Instead, its leadership has fractured along lines of personal and family rivalries, creating multiple decision-making poles. The PUK’s splintering may aid the KDP in its aspiration to consolidate its hold on the region’s institutions. It may also benefit the PUK’s other rivals in Suleimaniya, the only province where the PUK still enjoys significant support. But Gorran, which split off from the PUK in 2009 in opposition to the KDP-PUK duopoly, faces an internal crisis of its own following the 2017 death of its founding leader, Nowshirwan Mustafa. This leaves New Generation, a movement founded by Shaswar Abdulwahid, which has taken in Gorran defectors.

How has the political landscape changed since the referendum?

The KDP-PUK strategic partnership, a power-sharing deal between Barzani and Talabani, has framed the Kurdish region’s political system for more than a decade. Since the KDP and PUK each maintain their own security forces in their respective areas of control, this partnership is paramount to sustaining governance. But the two parties’ arrangement was already in crisis after the 2013 Assembly elections, due to the PUK’s poor showing, and it totally unravelled after the referendum and Talabani’s death, with each blaming the other for the severity of the backlash from Baghdad. The PUK’s decline and the KDP’s ambitions are challenging this arrangement, which kept the region in balance internally as well as with its neighbours, Turkey and Iran.

Gorran, which has been around for ten years, has yet to find its place in the new KDP-dominated landscape. It has been unable to replace the PUK as the KDP’s strategic partner in Suleimaniya. In 2014, it agreed to participate in government, but then quit in protest two years later, costing itself credibility as both an opposition force and a potential ruling party. This background explains the emergence of New Generation as an anti-establishment movement giving voice to popular disillusionment with the political leadership and the governing system as a whole; effectively, it has been able to pick up open support in Suleimaniya only.

Kurdistan’s institutions also have suffered amid the turmoil. The KDP’s dispute with Gorran over the extralegal extension of Barzani’s presidency paralysed the Assembly, which has been unable to convene since 2015. The regional government has been compelled to operate with six acting ministers since Gorran and the Kurdistan Islamic Group withdrew their ministers from the cabinet, including those holding the Peshmerga (defence) and finance portfolios. And the region has been without a president since Barzani stepped down following the referendum debacle, although he remains the ultimate arbiter behind the scenes as KDP leader.

Voters are equally dissatisfied with both parties.

How strong is the opposition to the KDP and PUK?

Voters are equally dissatisfied with both parties. Yet the KDP faces less opposition in Erbil and Dohuk than the PUK does in Suleimaniya. The KDP’s cohesion has helped it maintain support through a mix of co-optation and control, which has shrunk the space for genuine political competition. Its control over resource flows, public finances and employment has made many voters dependent on it for their livelihood. Opposition to its rule manifests itself through non-participation rather than voting for another party.

The PUK has been unable to use a similar strategy in Suleimaniya because of its fragmentation: rival politicians share and compete for key economic and security portfolios. This fragmentation leaves margins within which opposition groups can thrive.

Yet it is unclear if opposition parties in Suleimaniya can do more than just voice discontent. Groups such as New Generation, like Gorran and the Coalition for Justice and Democracy before it, may actually turn out to be useful for the ruling establishment. With its inflammatory rhetoric and undefined ideas for reform, New Generation is channelling anger on the streets and creating the appearance of open democratic debate without posing a real challenge to the twin parties and the political system they have built. Independent journalists and intellectuals have reproached opposition parties for playing what they call a farcical game, one these parties are fated to lose because – the critics claim – elections are not free and fair and the KDP-PUK duopoly has an iron grip on the region’s institutions. Kurdish youth widely share this sentiment. Alienation from politics and distrust of elections encourages people to acquiesce in the status quo and merely seek their share of the top-down wealth distribution through party patronage.

Do people still have confidence in elections in the wake of fraud allegations during Iraq’s parliamentary polls in May?

Trust in elections is at its lowest point in Iraqi Kurdistan’s modern history. The region’s parliamentary system helped ensure a degree of respect for democratic institutions, mechanisms and practices. Since the fall of the Baathist regime, the region has held three parliamentary elections (in 2005, 2009 and 2013), two rounds of provincial and local elections (in 2005 and 2013), and a presidential election (in 2009). (It also held elections during the period 1991-2003, when it was independent all but in name, but virtually cut off from the outside world, including Baghdad. Iraq in those years was under comprehensive UN sanctions, and the Baathist regime imposed a second, internal embargo upon the three majority-Kurdish provinces.) Despite its shortcomings in passing legislation, the Assembly was an effective platform for multi-party debate and oversight over the executive. The region had a vibrant civil society that mobilised in 2011 – in tune with protesters throughout the Middle East and North Africa – to protest KDP-PUK control over public institutions, denounce top-level corruption and demand better governance.

The war against the Islamic State in 2014-2017 weakened Iraqi Kurdistan’s young democratic institutions. The failure of popular uprisings in the Middle East, the subsequent geopolitical turmoil and the outcome of the referendum led political leaders to distrust parliamentary democracy as an effective governing system and put security and stability above democratic processes. Popular trust in democratic mechanisms eroded in tandem.

But another factor was that democracy proved incapable of removing a discredited leadership, a perception compounded by allegations of widespread fraud in the Kurdish region and disputed territories during the Iraqi parliamentary elections in May 2018. The KDP and PUK unexpectedly won almost the same number of seats in the Council of Representatives in Baghdad as they had in 2014, despite their decreasing popularity and post-referendum political and military setbacks. In many Iraqi Kurds’ view, elections have become a formality, a way for the established elites to legitimise their rule rather than an avenue for political change.

Under what conditions could violence occur?

The formula for an explosion would be the total absence of avenues for meaningful political participation plus blatant electoral fraud and continued poor governance. Yet geopolitical threats posed by the growing U.S.-Iran competition in the aftermath of the war against the Islamic State, the ongoing budget crisis and the persistent political-military standoff with Baghdad after the referendum are deterring the Kurdish public from again taking to the streets, unhappy as many people are. The new normal, in the short to medium term, is to settle, however reluctantly, for the status quo.

How to Cope with Iraq’s Summer Brushfire