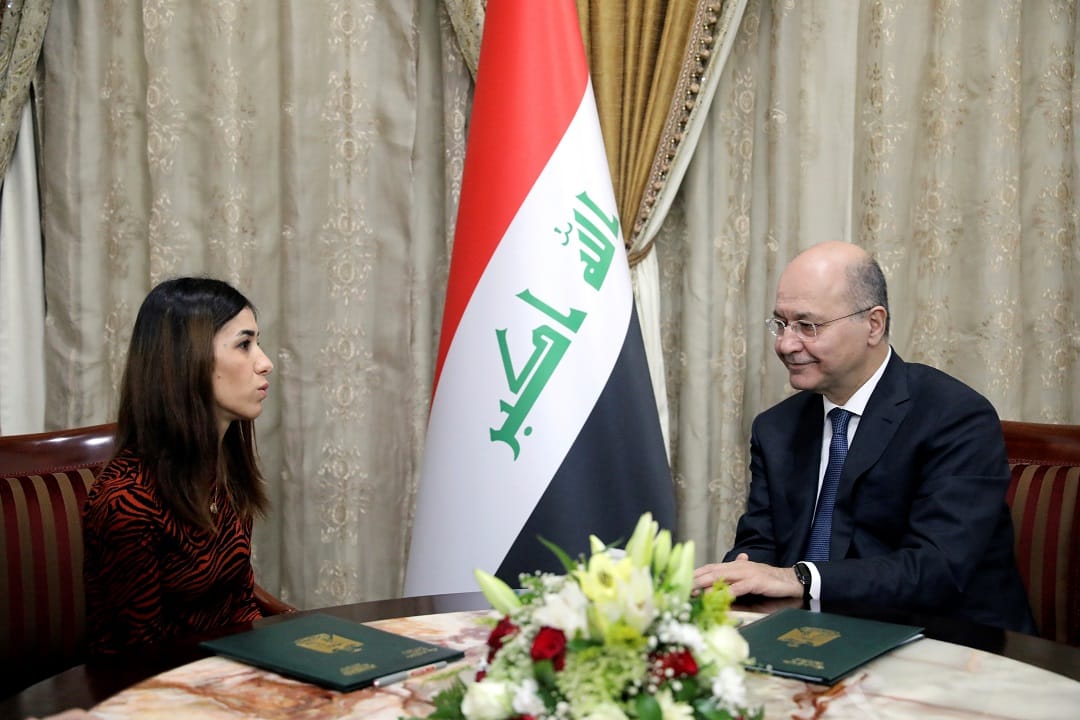 A Way Forward for Sinjar

Sinjar, the Iraqi district that was the site of the Yazidi genocide in 2014, still carries the wounds of that horrible time. But today a confluence of national and international interests holds the promise to revitalise the area and deliver it to local governance.

Sinjar, on Iraq’s north-western border with Syria, is still recovering from the trauma of occupation by the Islamic State (ISIS). In 2014, the jihadists seized the district, targeting its Yazidi majority in a genocidal campaign of killing, rape, abduction and enslavement. Now an opportunity has arisen to steer the area toward a safer future.

Both Iraq and its autonomous Kurdish region have formed new governments that seem ready to resume talks about the status of Iraq’s disputed territories. These are fourteen administrative districts – of which Sinjar is one – nominally controlled by Baghdad but claimed by the Kurdish regional government in Erbil. A new UN special representative for Iraq has brought fresh momentum to the task of resolving the disputed territories’ status. Meanwhile, Nadia Murad, a UN Good-will Ambassador who survived the Yazidi genocide, has won the Nobel Peace Prize, attracting renewed international attention to Sinjar in particular. The new government and the UN should jump at this chance to work with Yazidi leaders to rebuild Sinjar as an example for all Iraq.

Crisis Group concluded that only the Iraqi state could stabilise Sinjar.

A Region Yet to Recover

Sinjar became the scene of atrocities in August 2014, when ISIS militants murdered and enslaved thousands of Yazidis, driving tens of thousands more to flee their homes in terror. ISIS is gone; Iraqi and Kurdish forces finished retaking the district in mid-2017. But many of the Yazidi displaced remain huddled in makeshift shelters in the nearby Dohuk province, unable to return due to insecurity and the stagnant economy. Since 2003 a succession of outsiders – first Iraqi Kurdistan’s Kurdistan Democratic Party (KDP), then ISIS, then factions affiliated with the Kurdistan Workers Party (PKK), then the Iran-backed Popular Mobilisation Units (the militias that presently patrol Sinjar) – have controlled the district or parts thereof, pushing the population to take up arms and dividing local elites.

In a February 2018 report, Crisis Group concluded that only the Iraqi state could stabilise Sinjar. We called on Baghdad to mediate between factions and restore local governance, in order to allow the displaced to return, lay the groundwork for reconstruction and end foreign interference. We urged the federal government to merge competing militias into a unified police force and open administrative jobs to skilled locals regardless of which outsiders they had aligned themselves with before.

Ten months later, Sinjar is scarcely better off. Both the federal and Kurdish regional governments have been busy with elections in 2018, and neither has paid due attention to Sinjar’s challenges, which they may deem minor. In May, Baghdad tasked the National Reconciliation Committee, a government body with a mandate to facilitate inter-communal peace, with formulating a roadmap for reinstituting governance in Sinjar. The Committee’s thirteen-point plan includes, among other provisions, calls to restore security, as well as basic health care, education and agriculture, to enable the uprooted to return. In late October, Baghdad and Erbil tried to reach a deal on the return of Sinjar’s local councils to the district. As yet, however, there is no progress either in implementing the roadmap or in bringing back the local councils. Sinjar remains dominated by the Popular Mobilisation Units.

It is tempting to surmise that the area can regain its footing only if Yazidi politicians and military leaders free themselves from dependency on Iraqi, regional and international patrons. Local supervision of governance and security would encourage the displaced to come back to their homes and lands.

Yet Baghdad and Erbil still have a role to play – and so do Iraq’s international partners.

Baghdad’s stake in stabilising Sinjar stems from its newly appointed government’s interest in engagement with Erbil. Adel Abdul Mahdi, the new prime minister, has long enjoyed strong relations with the Kurdish regional government. Cooperation with the Kurds could allow him to counterbalance the growing influence of Shiite factions affiliated with the Popular Mobilisation Units. Barham Salih, the new president, likewise has expressed a desire to reaffirm Iraq’s commitment to accountability and reconciliation in the post-ISIS era, and in particular to address the disputed territories question as a way to strengthen his office. Sunni Arabs in Parliament belonging to the Islah bloc could profitably ally with the Kurds to press the Popular Mobilisation Units to withdraw from the disputed territories, home to their main constituencies. The yet-to-be-named defence minister, a post usually assigned to a Sunni Arab, might also back such an agreement, especially if he comes from Islah.

Key international players would like to support Erbil-Baghdad negotiations as a way of reinforcing Iraq’s unity.

For its part, Erbil wants to engage with Baghdad as a way to recoup its losses (in both autonomy and territory) after the September 2017 referendum on Kurdish independence. The KDP’s Masoud Barzani, the referendum’s architect, hopes to use senior party officials in ministerial positions in Baghdad to negotiate a settlement on outstanding issues, such as security and governance in the disputed territories, oil exports and revenue sharing. Competition between the KDP and the Patriotic Union of Kurdistan (PUK) could block a settlement, however, as government formation unfolds in Erbil. The KDP’s ambition for hegemony in Iraqi Kurdistan could push the PUK closer to Iran as a way to consolidate its position in Baghdad. A further breach in the KDP-PUK relationship, following a decade of close cooperation in both the Kurdish region and Baghdad, would complicate efforts to settle the disputed territories issue. Yet the two parties still have common interests there. This suggests that as long as the KDP’s engagement with Baghdad endures, it has an interest in working with the PUK to move toward a deal with the federal government on the disputed territories, including Sinjar.

Key international players – the UN Assistance Mission in Iraq, U.S. and EU – would like to support Erbil-Baghdad negotiations as a way of reinforcing Iraq’s unity, enhancing the prime minister’s power and ensuring the government’s stability. Sympathy with the Yazidis’ plight makes Sinjar a strong entry point for renewed international diplomatic engagement in Iraq.

To capitalise on this confluence of interests, Yazidi leaders in Baghdad, the Kurdish region and Sinjar district, including Nadia Murad with her moral authority, should advocate that Sinjar become a model for addressing the disputed territories’ status. The Sinjar councils should commit to honouring the thirteen-point roadmap presented by Iraq’s National Reconciliation Committee in May.

Prime Minister Abdul-Mahdi should continue the work of his predecessor in tackling the Sinjar question through an agreement with Erbil, and step up efforts to reach a security arrangement in Sinjar that includes the Popular Mobilisation Units.

The Abdul-Mahdi government should take the following steps:

The president of Iraq should continue public commitment to addressing the case of Sinjar, including by seeing through completion of the National Reconciliation Committee’s roadmap by an agreed-upon deadline.

The Kurdistan Regional Government should take the following steps:

Failure to stabilise Sinjar would come at considerable risk for the federal government and its international partners.

Iran and Popular Mobilisation Unit officials should agree on merging the Units’ Yazidi fighters under the authority and on the payroll of the interior and defence ministries, and otherwise withdrawing from Sinjar, in exchange for allowing non-Yazidi commanders continued access to Sinjar’s border with Syria (with the proviso that, eventually, the Iraqi army will reacquire full control over the border).

The U.S., EU and UN Assistance Mission for Iraq should take the following steps:

The Sinjar District Council (once it has come back to the district) should facilitate the return of all displaced Sinjar residents, including non-Yazidis, to their homes. With the help of the Baghdad and Erbil governments, as well as the UN, it should establish a mechanism for reconciliation between Sinjar Arabs and Yazidis (as well as other minorities that suffered at the hands of ISIS).

The UN, working with the National Reconciliation Committee, should lead Sinjar’s reconstruction in a way that takes into account inter-communal tensions and the risks involved in favouring one community over another, or giving that perception.

Failure to stabilise Sinjar would come at considerable risk for the federal government and its international partners. The pain of ISIS depredations is etched in Yazidis’ collective memory, leaving survivors with feelings of victimhood and helplessness. Unable to obtain justice by institutional means, many feel an impulse for vengeance. But things need not go that way. The moment presents an opportunity for a concerted push by local leaders in Sinjar to make overdue administrative and security changes in the district with the help of both the federal and Kurdish regional governments. If they succeed, they could turn Sinjar into a model for addressing the wider disputed territories question that has long divided Baghdad and Erbil.

This possibility, combined with knowledge that the calculations in Baghdad and Erbil may change, should prompt rapid action. The time is now to chart a new way forward for Sinjar.

Winning the Post-ISIS Battle for Iraq in Sinjar