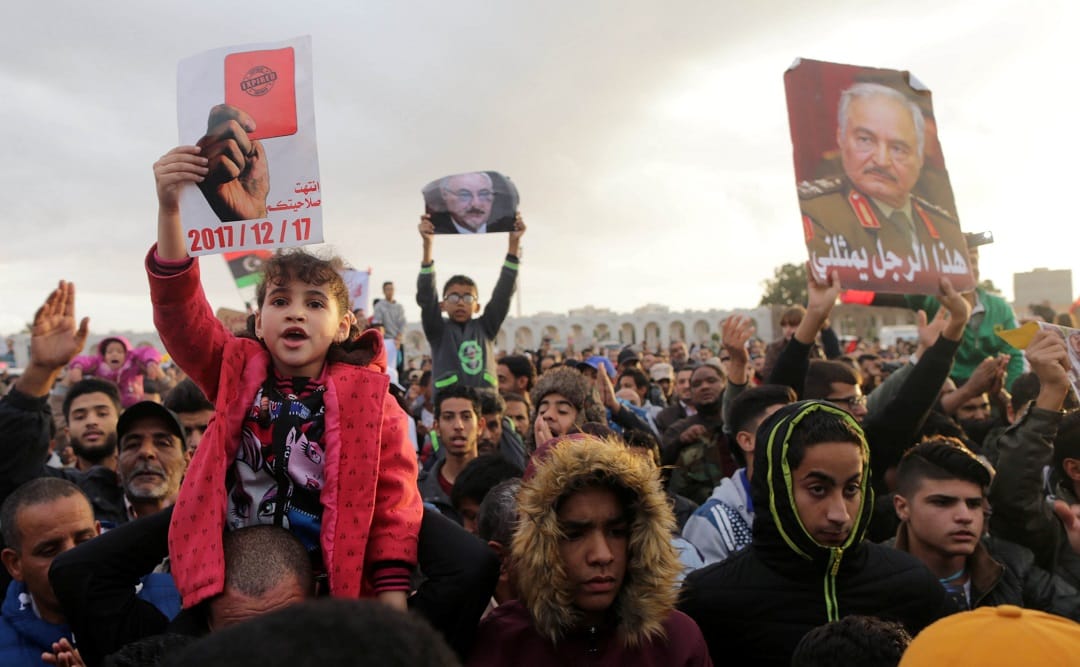 Supporters of Khalifa Haftar take part in a rally demanding Haftar to take over after a UN deal for a political solution missed what they said said was a self-imposed deadline on Sunday, in Benghazi, on 17 December 2017. REUTERS/Esam Omran Al-Fetori
Commentary / Middle East & North Africa 21 December 2017

New Risks in Libya as Khalifa Haftar Dismisses UN-backed Accord

Khalifa Haftar, who rules eastern Libya, has dismissed the two-year-old, UN-backed accord about how the country should be run. Haftar’s regional and international partners should act now to mitigate this new risk of escalation over his apparent ambition to rule Libya on his own.

Tensions are rising in Libya after the de facto ruler of the country’s east, Field Marshal Khalifa Haftar, publicly dismissed the two-year-old international deal on how Libya should be governed. To neutralise the risk of new conflict, Haftar’s international and regional allies should forcefully condemn his attempt at undermining the UN-led peace process and urge him back to the diplomatic track.

The latest row started on 17 December, the second anniversary of the 2015 Libyan Political Agreement (LPA), when Haftar, the commander-in-chief of the Libyan National Army (LNA) that dominates eastern Libya, announced that he considered the LPA to have expired.

As a result, he argued, institutions emanating from the agreement such as the Government of National Accord and Presidency Council headed by Fayez al-Serraj are no longer officially valid. Haftar said that his own LNA is now the “sole legitimate institution” in Libya, and rejected the authority of any government or parliament until new elections can be held. He made his statement after his allies moved to occupy eastern offices of the High National Elections Commission, which is preparing for elections in 2018 with international support. His allies also have made calls for the commission’s staff to be changed and its headquarters moved from Tripoli, the capital.

Haftar’s announcement was not unexpected. As the ongoing UN-led peace process has drifted since October, when the last round of negotiations to revise the LPA ended inconclusively, he and his allies had repeatedly warned that they consider the agreement close to expiration and that another framework would have to be found.

In parallel, Haftar supporters promoted a petition to appoint him as military ruler of Libya, which they claimed garnered over one million signatures. Calls for mass demonstrations in support of Haftar have also spread, although protests largely failed to materialise. Indeed, Haftar’s announcement has had scant impact so far and has not changed the situation on the ground.

Politically, Haftar’s moves raise several troubling questions. The first is whether Haftar and the LNA are effectively declaring civilian institutions moot. This has already happened in eastern Libya, where he has bypassed an increasingly defunct eastern government and the House of Representatives (HoR), the parliament based in the town of Tobruk, to which he is allied. The HoR, on 21 November, had endorsed the UN’s proposed action plan for a partial amendment of the LPA, and is supposed to play an important role during the transition to a more permanent arrangement. It is not clear what Haftar’s announcement means for the HoR’s own position, and whether it too has “expired”, since its lifespan was extended by the LPA.

Worries about a Haftar offensive could also prompt pre-emptive or opportunistic attacks by Haftar opponents.

The second question is what Haftar and his allies plan to do next, and how their opponents will react. Anticipation of the 17 December announcement, and of an offensive by Haftar’s LNA, has already caused some armed groups from Misrata to mobilise near Sirte. Indeed, worries about a Haftar offensive could also prompt pre-emptive or opportunistic attacks by Haftar opponents, who have previously confronted his forces in the “oil crescent”, an area containing key oil installations in the Gulf of Sirte. This is particularly true in parts of western Libya under the nominal control of militias that broadly accept the legitimacy of the Tripoli-based government but fear that Haftar allies are planning to assert themselves. These include the area around Sabratha that saw fighting in October as well as the capital.

Thirdly, many Libyans are wondering how long Haftar can continue to challenge, without any consequences, the international consensus that a political solution to the Libyan conflict must be found. As he acknowledged in his 17 December statement, Haftar has received repeated warnings from the international community against carrying through his threat of declaring the expiration of the LPA and, more generally, undermining UN-led peace efforts. The UN Security Council did so several times in past months, most recently on 14 December, as did the many international and regional states supporting the UN process. Haftar’s closest international supporters, Egypt and the United Arab Emirates, have reportedly intervened directly with him.

Amid this uncertainty, other developments on 17 December are adding to the confusion. One is the assassination by unknown assailants of Mohammed Eshtewi, the mayor of Misrata. This important city is a dominant military and political actor, and the killing risks widening multiple divisions: between factions that are open to a deal with Haftar and those that reject any compromise with him; between the city’s Municipal Council and its Military Council; and between locals and members of armed groups driven out of Benghazi by the LNA and now based in Misrata.

Some residents of Misrata – without any evidence – wonder whether the assassination may have been carried out by Haftar allies, who would stand to benefit from sowing further divisions. Likewise, rumours are circulating that the ex-Benghazi armed groups in the city are planning to take advantage of growing east-west tensions by launching a new offensive on the oil installations of the Gulf of Sirte, currently held by the LNA. Two such previous attempts were repelled.

At the same time, Misratan armed groups are reportedly consolidating around Sirte, the city they liberated from the Islamic State (ISIS) a year ago, hoping to pre-empt an attempt by pro-Haftar groups to take it over. And in Tripoli and its environs, the prospect looms of renewed tensions between armed groups that could align with Haftar’s camp and those opposed to him.

The Need for a Clear, Unified Response

The potential for a new escalation from various camps has increased, not least because Haftar’s declaration has added fuel to Libya’s slow-burning fires. The UN Security Council and states that have supported the peace process have been muted in their response until now. Most actors prefer to avoid comment or merely to reiterate, as did the UN Secretary-General’s Special Representative to Libya, Ghassan Salamé on 17 December, calls that parties to the conflict should “refrain from any actions that could undermine the political process”. Perhaps they calculate that no actual hostile action has been taken and that Haftar’s declaration has been a flop, as some of his opponents argue, and can be ignored.

Libyans, however, are watching closely and may interpret this silence as a lack of interest, if not assent. Given that successive efforts by international actors to engage with Haftar in pursuit of a negotiated political settlement have yet again met with his defiance, they should speak out more forcefully and condemn this latest attempt at undermining it. It is particularly important that private frustrations be vented publicly by Haftar’s regional allies, Egypt and the United Arab Emirates, who appear to have been snubbed by their client once again, as well as countries such as France and Russia, which have done much to engage with him and push him toward diplomacy over the past year.

Admonitions may not convince Haftar himself, who appears to be tenaciously clinging to his ambition of becoming either Libya’s military ruler or its next president. But they would signal to other actors that the international community is intent on defending the process that Salamé and others have put in place, whose broad outlines have been accepted by a wide range of Libyans.

The Libyan Political Agreement: Time for a Reset