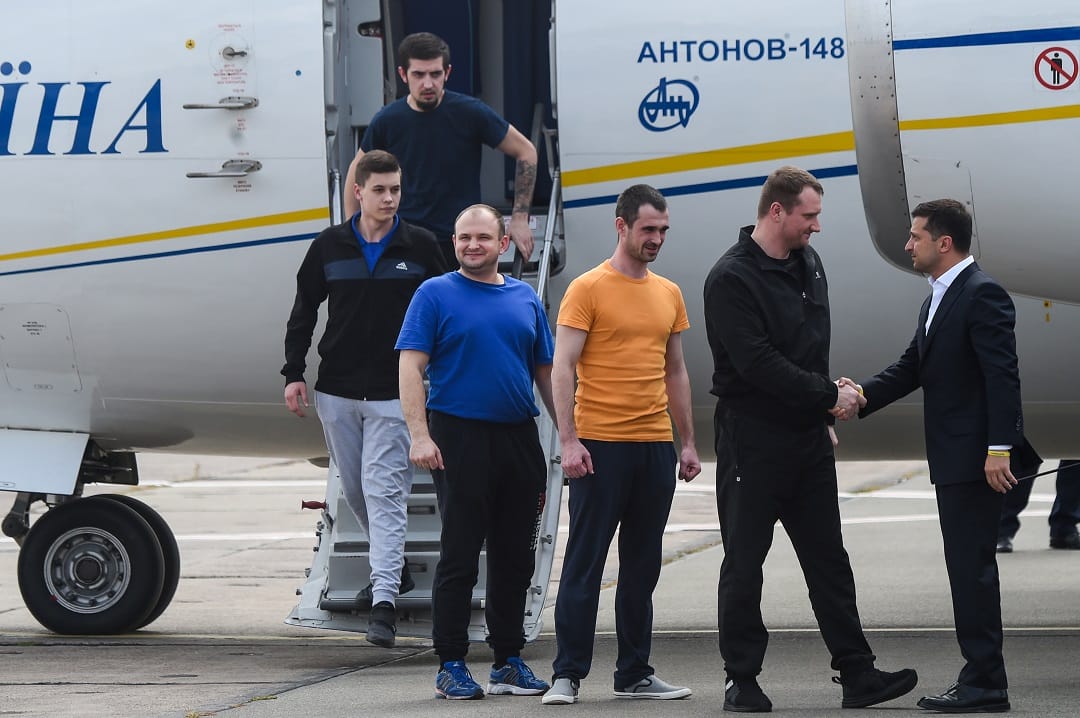 Ukraine's President Zelensky welcomes former prisoners as they disembark from a plane on September 7, 2019 at Boryspil international airport in Kiev after a long-awaited exchange of prisoners between Moscow and Kiev. AFP/Sergei Supinsky
Q&A / Europe & Central Asia 11 September 2019

A long-awaited prisoner exchange between Ukraine and Russia marks a positive development in their bilateral relationship. Both countries should now build on their recent progress to implement the 2014-2015 Minsk agreements, the surest path to ending the war in eastern Ukraine.

After months of rumours and negotiations, Ukraine and Russia finally exchanged dozens of prisoners, all held in connection with the conflict that began when Russia annexed Crimea in early 2014, and which continues violently in Ukraine’s east.

Moscow released 35 Ukrainian citizens. They included four Crimeans arrested shortly after Russia’s February 2014 takeover of the peninsula, along with 24 sailors whom Russian security forces apprehended in the Black Sea last year. Russian courts had charged them with crimes including terrorism, espionage, conspiracy to violate state borders, and, most bizarrely, killing Russian troops in Chechnya in the mid-1990s. Human rights groups and governments decried these detentions, and viewed the sailors as prisoners of war.

Kyiv also released 35 detainees: 22 Ukrainian citizens, twelve Russian citizens and one Moldovan. Best known is Kirill Vyshynsky, who had directed the Ukrainian branch of Russian state news outlet RIA. Arrested on treason charges last year, he renounced his Ukrainian citizenship. According to Moscow and international human rights groups, his arrest and imprisonment were politically motivated. Other prisoners had been charged with fighting alongside Russian-backed separatists in eastern Ukraine or aligning with Russian troops in Crimea. Most controversially, Kyiv freed Vladimir Tsemakh, a Ukrainian citizen and separatist air defence commander who may have helped conceal the missile that shot down flight MH-17 in July 2014, killing all aboard.

How are Ukrainian and Russian publics reacting?

As the 35 men stepped off the plane in Kyiv on Saturday, the runway erupted with cheers, family members sobbed with relief, and President Zelenskyy teared up. Ukrainian media reflected a celebratory public mood. In Moscow, reactions were more subdued. “Our people have been freed!” tweeted the Russian Embassy in Ukraine after the plane carrying the former prisoners left for Moscow. Yet just a handful of officials met them upon landing and only Vyshynsky has received substantial coverage in the Russian press.

Many in and outside of Ukraine were critical of Tsemakh’s release, arguing that he was needed to prove Russian responsibility for launching the missile that downed flight MH-17. But speaking on the runway Saturday, Zelenskyy told reporters that Dutch investigators had questioned Tsemakh prior to release, and the exchange had been delayed to ensure they and their Ukrainian counterparts had the information they needed from him. Dutch Foreign Minister Stef Blok told his own country’s parliament the same. But the exchange may well not have happened without Tsemakh.

Are any prisoners still being held?

Ukrainian officials say over 200 citizens, including journalists, are held by de facto authorities in the Russian-backed self-proclaimed republics in Ukraine’s east, known as the Luhansk and Donetsk People’s Republics. Some of Kyiv's critics say Ukraine holds thousands of political prisoners, a claim that prominent rights groups have not backed up. Ukrainian authorities have indeed arrested large numbers of people in relation to protests and violence linked to the conflict, but Russian officials generally do not champion these prisoners’ cases publicly. According to media reports, representatives of Kyiv and the breakaway regions may meet on 18 September to discuss a trade.

Separately, according to Ukraine’s human rights ombudsman Lyudmila Denysova, 113 Ukrainian citizens are imprisoned in Crimea and Russia for political reasons. They include 89 Crimean Tatars accused of terrorism (critics of Russia say these are false charges premised on silencing opponents of annexation). On 10 September, Denysova said Kyiv was negotiating with Moscow for their release too.

What does this mean for prospects for peace?

The prisoner exchange is the latest and most notable in a series of recent positive steps. Kyiv and Russian-backed entities in eastern Ukraine recommitted to a ceasefire that has, over the past six weeks, brought civilian deaths down to zero. They further agreed to repair a long-destroyed bridge connecting the de facto Luhansk People’s Republic to government-held Ukraine. Kyiv has also spoken of reinstating trade across the front lines, which, apart from rebuilding commercial and social ties, could improve dire living conditions in separatist-held areas. In this context, the exchange signals Kyiv’s and Moscow’s willingness to make concessions. Moreover, the apparent public support for Saturday’s exchange strengthens Zelenskyy’s mandate to pursue compromise and defy hardline critics.

Still, no one should overstate the significance of this event: real progress in ending the conflict requires each side to implement the stalled 2014-2015 Minsk agreements. That means Russia must withdraw its forces from eastern Ukraine and suspend support to groups it backs in that region. Kyiv, for its part, needs to hold elections, implement an amnesty, permit some form of self-governance in these territories and fulfil its other obligations to enable reintegration. The two sides have yet to agree on the sequence of these steps.

Kyiv seeks a meeting of the Normandy quartet, which brings together Ukraine, Russia, France, and Germany, to chart a way to peace. Should it take place soon and produce clear steps to advance the Minsk agreements or otherwise improve Russia-Ukraine relations, the meeting could be cause for optimism. Further prisoner exchanges, restoration of legal trade and eased travel restrictions between Ukraine and its breakaway regions (including by repairing the bridge mentioned above), or between Ukraine and Russia, would signal a continued thaw.

Much could derail progress; worst would be a recurrence of fighting in eastern Ukraine. How Zelenskyy responds to domestic pressure from those opposed to further concessions bears watching, as does rhetoric from both Moscow and Kyiv in the coming weeks and months. The EU and its member states, the U.S., and other interested parties can improve prospects for peace by welcoming the steps Ukraine and Russia have taken so far and facilitating further dialogue, including through the Normandy format.

Rebels without a Cause: Russia’s Proxies in Eastern Ukraine

Is Russia Changing Its Calculus in Eastern Ukraine?