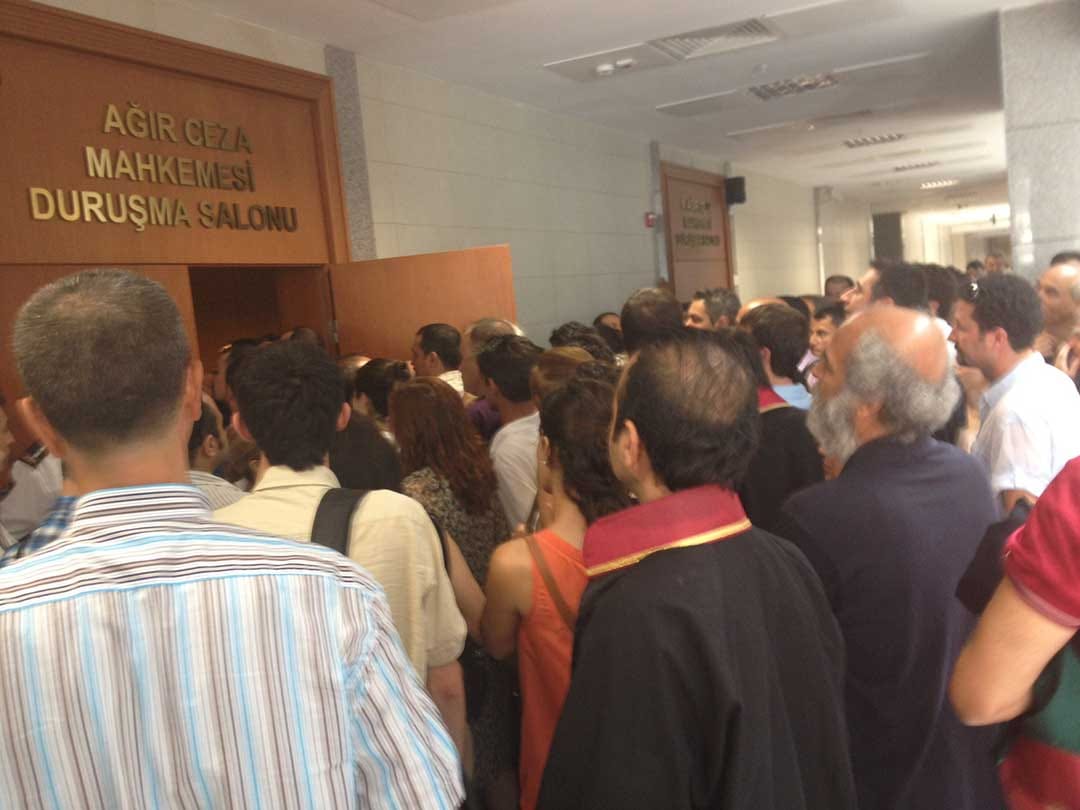 Lawyers feel the heat inside Istanbul’s Palace of Justice

Opened a year ago, İstanbul’s impressive nineteen-storey Palace of Justice is trumpeted to be the largest in Europe. Once inside the sparkling building, it looks airy, sterile and efficient. Not one, but two massive, blindfolded statues of Lady Justice flank the marble inner stairs to the law courts. When I visited this week, yellow plastic signs beneath both statues warned: Slippery Floor!

I was there on 16 and 17 July to catch a glimpse of the proceedings held by İstanbul’s 16th High Criminal Court in the second case against the Kurdistan Communities Union (KCK), a Kurdish umbrella organisation that includes the armed and outlawed Kurdistan Workers’ Party (PKK). The case is part of a large investigation against the KCK ongoing since April 2009 throughout Turkey. Specially authorised courts have been set up in Istanbul, Diyarbakır and Van provinces, and so far 6000 to 7000 Kurdish activists, elected officials, politicians, lawyers, journalists and students have been detained. Some were later released. 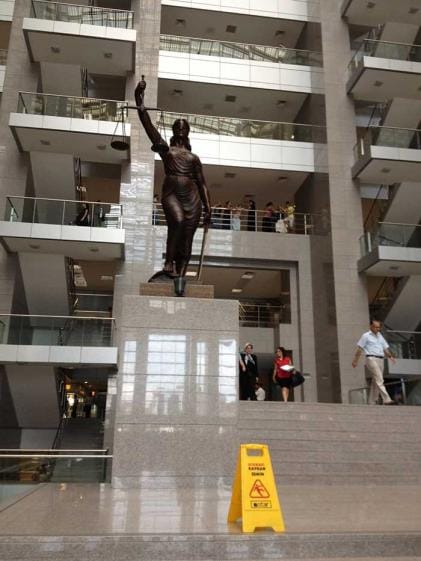 This particular case has been dubbed the “lawyers’ trial” because 44 of the 50 suspects detained in November 2011 were lawyers from sixteen different bar associations in Turkey, including jailed PKK leader Öcalan’s defence team. Among the accused were also a former Kurdish MP, two drivers and a secretary. Altogether, 37 people were jailed pending trial, and the first hearing on 16 July came after eight months of detention. At the end of the third hearing on 18 July, the court released nine. But the remaining 28 will stay in prison until the next hearing on 6 November 2012 (at which point they will have spent almost a year in jail without being found guilty of any charges). The accusations in the 890-page indictment, which is mostly based on confessions of an informant, include running a terrorist organisation and secretly passing Öcalan’s orders to the insurgency’s leadership in northern Iraq’s Qandil mountains.

Much has already been written about the high politics and weak evidence inside the court room in this and other KCK cases. Outside however, “solidarity” was the word that best described the scene at the court house at 9am on 16 July, and not just among Turkey’s Kurdish speakers. The head of Turkey’s Union of Bar Associations stood next to representatives from bar associations of Istanbul, Ankara and Izmir as well as from the south-eastern provinces of Mardin, Urfa, Șırnak and Diyarbakır. Foreign journalists and NGOs joined legal delegations from France, Canada, Sweden, Switzerland, Germany and the UK. Inside the halls, I ran into Kurdish deputies, including the legal pro-Kurdish Peace and Democracy Party’s co-chair, as well as the mayor of Diyarbakır. Their joint message was that the case was bigger than just the PKK question and was pitting “the judiciary against the defence”. In other words, they thought the state had turned up the heat on the whole legal profession.

A few staff from the Istanbul law firm at the centre of the November investigation were present, calm and organised, especially when it came to making sure foreigners got access to the proceedings. They seemed to have been through similar situations before, if not professionally then personally. Some relished the attention the case was getting as the outside world scrutinised Turkey’s apparently faltering judicial processes. Their serious but vigilant expressions read “see, we have been complaining about how unfairly we are treated. Now you can see for yourselves.”

The case started in the largest room available. It can hold 100 people – and many more if air is optional – but it still couldn’t accommodate the many who wanted to get in.  Weary security guards complained that lawyers who wanted to attend the trial had priority, and after more than 100 lawyers had gone in, there was little room for others, including relatives of the accused. To many angry journalists, they suggested taking turns to go in, even if they represented different media outlets. An exhausted guard asked a Dutch journalist in Turkish, “Do you really have to go in? Can’t you get the news from a wire?”

With persistence and a practiced expression that said “I understand your difficulty but please understand that I, too, have to go in”, I got through two roped-off security points the first day, only to get stuck outside the actual courtroom door. Dozens of people were already pouring out of the tiny entrance. The humid air smelled of sweat, frustration and tension. Journalists, activists and relatives screamed angrily at court attendants to open the doors wider, to let more people in, to simply solve the overcrowding problem. Impossible. A ruckus ensued, and I realised I might not get inside. The second day, there were three security points, making it harder to reach the courtroom. I did not insist on squeezing my way in through the wall of flesh. In my mind, I was giving my spot to the relatives of the accused in front of me, arguing in vain to be let in.

The security personnel were obviously trained to deal with high-voltage cases and tried hard to keep their cool, at least during the time I was there. One told me in a regretful tone that he had never seen a case with so many people demanding to get in. The crush was worse, he said, than when a high-profile head of a sports club was on trial in a much-publicised match-fixing case earlier this year.

On the day of my first visit, the editor in chief of a liberal-minded Turkish daily warned in his column that the governing Justice and Development Party’s (AKP) policies had ‘twisted the [Kurdish] arm to the point of breaking it’. At the court, I didn’t get the feeling that the bone was about to snap. Instead, what I sensed was that the bone had simply adjusted to the pressure, accepted the imposition and had even come to define itself by it. Turkish Kurds, like several other groups in Turkey, seem numbed by decades of twisting and waiting at courtroom doors. And a bone doesn’t necessarily have to break for us to know that any constant, throbbing pain in one part of the body will eventually be felt all over.