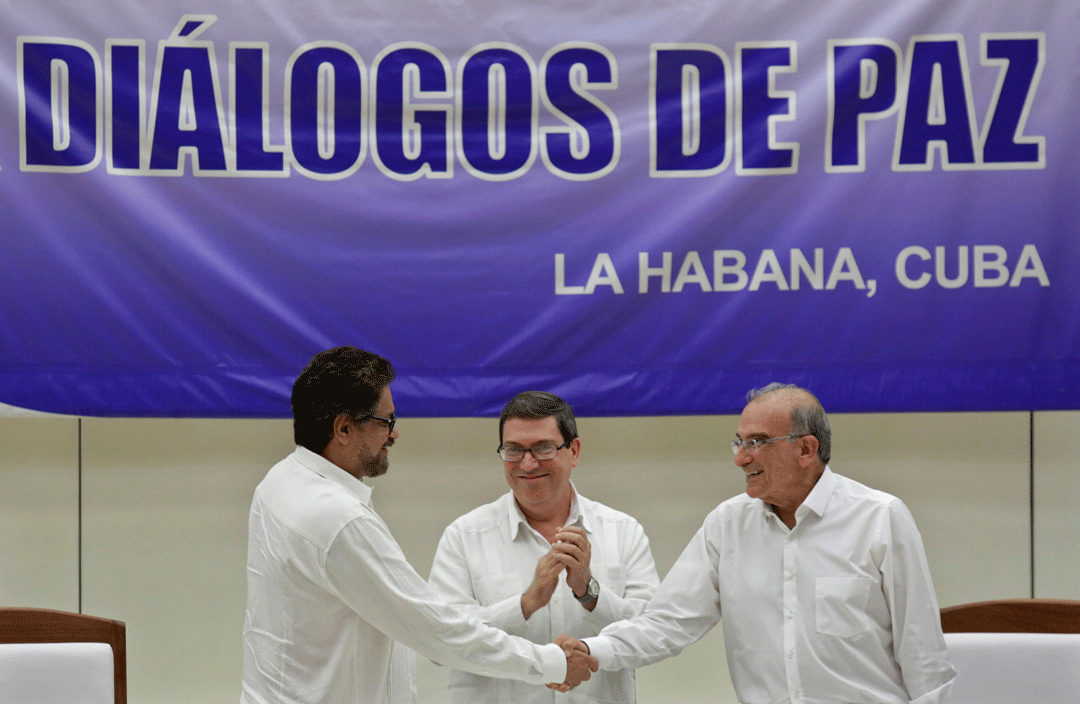 On the Verge of Peace: Colombia Reaches Final Agreement with the FARC

The comprehensive Colombia peace deal faces major challenges, including a 2 October plebiscite, disarmament and UN verification. But after four years of talks in Cuba, Colombians have passed a new landmark in the long search for an end to 52 years of armed conflict.

Crisis Group welcomes the 24 August announcement in Havana that Colombia and the Revolutionary Armed Forces of Colombia (FARC) have reached a final peace agreement. This is a landmark in the long search for an end to 52 years of armed conflict. After two failed attempts at negotiating peace with the largest guerrilla group over three decades, exhaustive and painstaking talks behind closed doors have led to a final agreement that aims to remedy the cause of the conflict, provide redress for its victims, and ensure that the FARC can eventually become part of the country’s democratic system.

The deal is the fruit of four years of talks in Cuba, including agreements on comprehensive rural reform; strengthening guarantees for political opposition; major reforms to drug policy and coca crop substitution; a truth commission; a special judicial apparatus to hear cases of the most serious human rights violations committed in the conflict; FARC’s reincorporation into civilian life; and seats for FARC in the Congress, among other issues. A special UN mission is already deploying to monitor and verify the weapons abandonment process, bilateral ceasefire and cessation of hostilities.

The final points negotiated included FARC’s participation in the political system and reintegration into civilian life. It will contest the 2018 congressional elections and be guaranteed a small number of seats in the Senate and House of Representatives. Until then, FARC can choose three civilians as non-voting representatives in the Senate and three in the House.

While the accord is cause for celebration, major challenges remain in the six to nine months ahead as Colombia transitions from war to peace. The most immediate is the 2 October plebiscite, when citizens will vote on the package, with the result binding on President Juan Manuel Santos. Low approval ratings and discontent with aspects of government performance dog him, while the opposition led by popular ex-President Álvaro Uribe, has targeted its campaign at the most controversial aspects of the peace deal: that convicted FARC members may avoid jail, although those most responsible for the most serious crimes still will face deprivation of liberty for several years, and guaranteed seats in Congress. The opposition also argues that it would renegotiate the deal to achieve better terms, which is generally considered to be unrealistic.

While the accord is cause for celebration, major challenges remain in the six to nine months ahead as Colombia transitions from war to peace.

Approval of the deal is far from a given. Proponents will have to argue simply and effectively and separate the merits of peace from the perceptions of government performance. The government has already begun to educate the public about the content of the accords. The FARC also has a role. It must start to gather its forces and destroy some weapons before the vote. Expressing remorse for its worst abuses against civilians, such as kidnapping and extortion, would go a long way toward convincing voters that it will fulfil the agreements in good faith.

FARC began to move off a war footing last year with an informal ceasefire, but its full transition will begin with the weapons abandonment process, set to last six months from the official signing of the agreements in late September. A detailed timeline, UN mission verification and clear protocols indicate the process has a robust framework. In light of the extermination campaign that met the FARC’s efforts to join the political system in the 1980s, however, concerns will focus on the security of fighters who leave the 23 cantonment and eight smaller sites where the guerrillas will concentrate. Efficient, flexible application of the security protocols will be essential. Security of the communities FARC formerly controlled will also be fundamental. These often have a hostile relationship with army, and the presence of illegal economic activities, above all coca cultivation and mining, will tempt other armed groups to seize vacated territory.

One such armed group could be the National Liberation Army (ELN), the second-largest guerrilla force, with an estimated 1,800 combatants and a strong presence in border areas with Venezuela. The government and ELN announced separate peace talks in March but have yet to convene the first round and are locked in a stalemate. Monitoring and verifying a cessation of hostilities in a context of ELN and other armed groups is sure to be a main challenge in the immediate post-conflict era.

FARC will also have to maintain internal cohesion during the transition to guarantee it can fulfil its side of the agreements, including stopping all forms of violence against the armed forces and civilians. Risk of dissident and divided units breaking away has been confirmed by events in the FARC’s First Front, which operates in the south-east province of Guaviare and has stated that one of its factions will not take part in the peace process. There is strong evidence that other FARC units are  divided. Attacks have already been attributed to them, and in some areas, fighters have joined the ELN.

The government also has the challenge of creating goodwill, both in areas long affected by violence and state abandonment, and also in zones expected to host cantonments. State legitimacy in many of these places is close to nil. The government must begin a sustained dialogue as it implements projects to stabilise territory and reintroduce its authority.

Finally, the UN mission tasked with monitoring and verifying arms abandonment, ceasefire and cessation of hostilities is essential for both the parties and society to trust that the deal will be fulfilled. Managing the expectations of local communities while remaining within its limited mandate will be challenging. Collecting and channelling reliable information from and through a plethora of national and international actors will be difficult. And as it resolves disputes over possible violations, it will be under pressure to take sides, especially against the FARC. To make informed decisions, it will need to consult with delegates from the guarantor nations, Norway and Cuba. The international community, especially but not only the U.S. and European Union, will on occasion need to publicly support its tough decisions during a turbulent period.

Crisis Group will analyse these and other challenges in the critical months ahead. But in light of the historic declaration in Havana, it is worth recalling that Colombia has faced and withstood bigger challenges in the past half century of armed conflict.

The Day after Tomorrow: Colombia’s FARC and the End of the Conflict

The Colombian Government’s First Official Peace Talks with the ELN 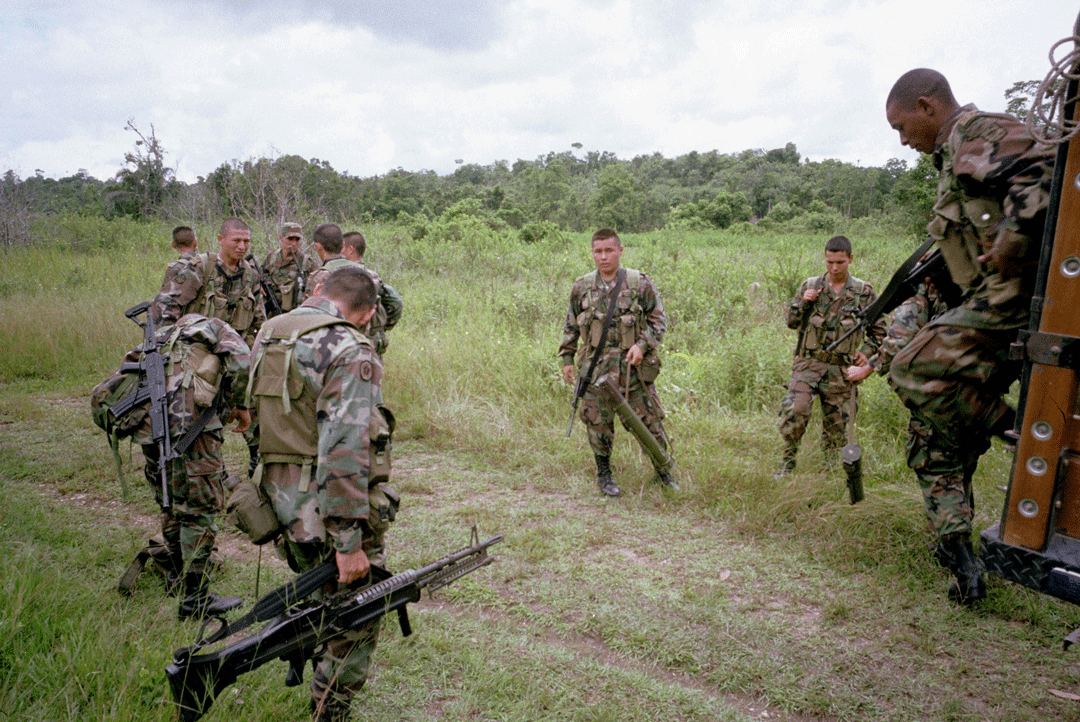 After four years of negotiations in Havana, Cuba, the Colombian government and the Revolutionary Armed Forces of Colombia (FARC) hope to sign a final peace agreement in 2016. In this video, Crisis Group's former Colombia Senior Analyst Christian Voelkel e