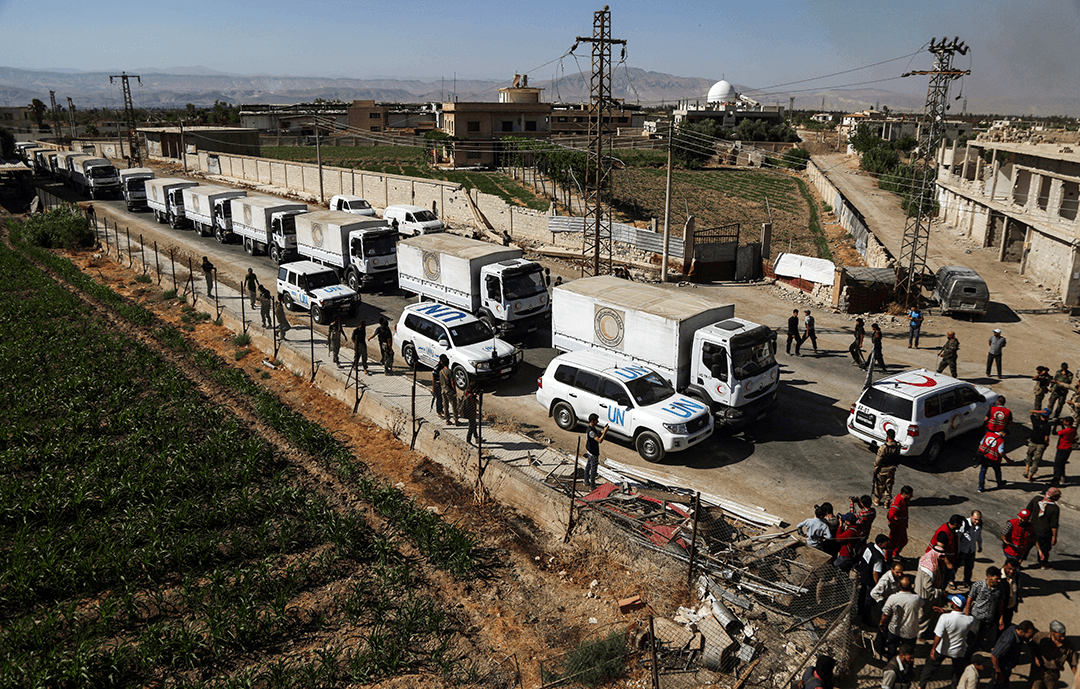 Russia Should Go Beyond Humanitarian Corridors in Syria

Russia’s proposal for humanitarian corridors for Eastern Ghouta and Rukban camp have little chance of mitigating suffering there. Instead, Moscow should push for a negotiated resolution of Eastern Ghouta through UN Security Council Resolution 2401 and secure normal aid agency access to Rukban, thereby enhancing its credibility as a mediator.

Syria’s civilians have suffered tremendously through the country’s seven years of conflict. Now, as the Syrian government and its allies prepare to retake Damascus’s Eastern Ghouta suburbs, hundreds of thousands will be caught in the crossfire once more. The humanitarian corridors announced by Russian Minister of Defense Sergei Shoigu for Eastern Ghouta, and proposed for the Rukban camp on the border with Jordan further east, are unlikely to substantially mitigate that suffering.

To be sure, any means for civilians to safely and voluntarily escape the violence in besieged Eastern Ghouta is positive and welcome. But the corridor announced unilaterally by Russia and the Syrian government through the Wafideen camp lacks the sort of guarantees that would allow Ghouta’s nearly 400,000 residents to use it or other concerned parties, including UN Security Council members, to endorse it.

First of all, residents would have to be able to reach the corridor without fear of being targeted en route. Daily ceasefires of five hours, still punctured by intermittent shelling, are too narrow a window. Prior experience with Syrian ceasefires has generated a deep sense of distrust. It would take quite some time without any violations for people to trust that this one is different. These five-hour windows also fall short of the cessation of hostilities and durable humanitarian pause demanded by UN Security Council Resolution 2401, which Russia supported.

Rather than saving lives, the corridor may even serve as a cover for further military escalation.

People in Eastern Ghouta also harbour a deep-seated fear of what would happen to them once they reach government-controlled territory. Compulsory military service for male family members is a concern regardless of political orientation. Retaliation by the security state is a threat for anyone who has – or whose loved ones have – a record of opposition to the regime. In Eastern Ghouta, that may include nearly everyone.

Thus, for most, an unconditional return to areas of government control is not a safe or realistic option, as evidenced by the miniscule numbers who left thus far. State media have claimed that the armed groups prevent people from leaving, holding them as human shields for all practical purposes. Such accounts are impossible to verify, but without credible guarantees, little if any coercion would be required to prevent departures.

Rather than saving lives, the corridor may even serve as a cover for further military escalation. As time elapses, the argument will gain ground that those still inside are either in cahoots with, or held back by, insurgents – with the implication that neither government forces nor their Russian allies are to blame for casualties from shelling and bombing the densely populated area indiscriminately.

Eastern Ghouta requires a negotiated resolution, not a military victory that would be disastrous – for Ghouta’s residents first and foremost, but also for Syria’s future. Hundreds of thousands of people cannot be crushed militarily and then successfully reintegrated into Syria’s state and society. A non-violent alternative is possible: Russia has negotiated with Eastern Ghouta’s non-jihadist rebel factions in the past. For Moscow, these are known interlocutors, with whom it is possible to reach an agreement.

Russia should work to secure Damascus’s approval for what would be a critical humanitarian lifeline to this community ... rather than declaring an evacuation corridor that is unnecessary.

Rukban’s situation is different. With no fighting ongoing in the area, residents there can leave the U.S.-policed zone around the Tanaf military base and return to their homes, no corridor needed. It is just that these homes are not safe. Last year, hundreds of Rukban residents returned to the town of Qaryatein near Homs, only to have the Islamic State (ISIS) overrun the town and massacre its civilians. Most of Rukban’s current residents are from Syria’s central Badiya desert and the country’s east, areas where ISIS has been defeated but which are not yet sufficiently secured. They would also need clarifications regarding their legal status when they return to areas of state control.

In the meantime, more should be done to deliver humanitarian assistance. Delivering aid across military lines from Damascus presents special challenges, including coordination with the U.S.-led coalition through de-confliction channels and with U.S.-backed militias inside the Tanaf zone. Still, Russia should work to secure Damascus’s approval for what would be a critical humanitarian lifeline to this community – a community the U.S. and Jordan have mostly failed to aid via the Jordanian border – rather than declaring an evacuation corridor that is unnecessary.

Humanitarian corridors as proposed by Russia do not offer solutions for either Eastern Ghouta or Rukban. Yet both areas present opportunities for Russia to work toward something genuinely stabilising and life-saving, if Russia is willing to sway its ally in Damascus. Pushing for a full implementation of UN Security Council Resolution 2401, which could provide an opening for a negotiated resolution in Eastern Ghouta, and securing humanitarian access to Rukban would greatly enhance Russia’s credibility as a mediator in Syria and, critically, spare more bloodshed.

This article was also published by the Valdai Discussion Club.

Russia a Reluctant Driver in the Syrian War