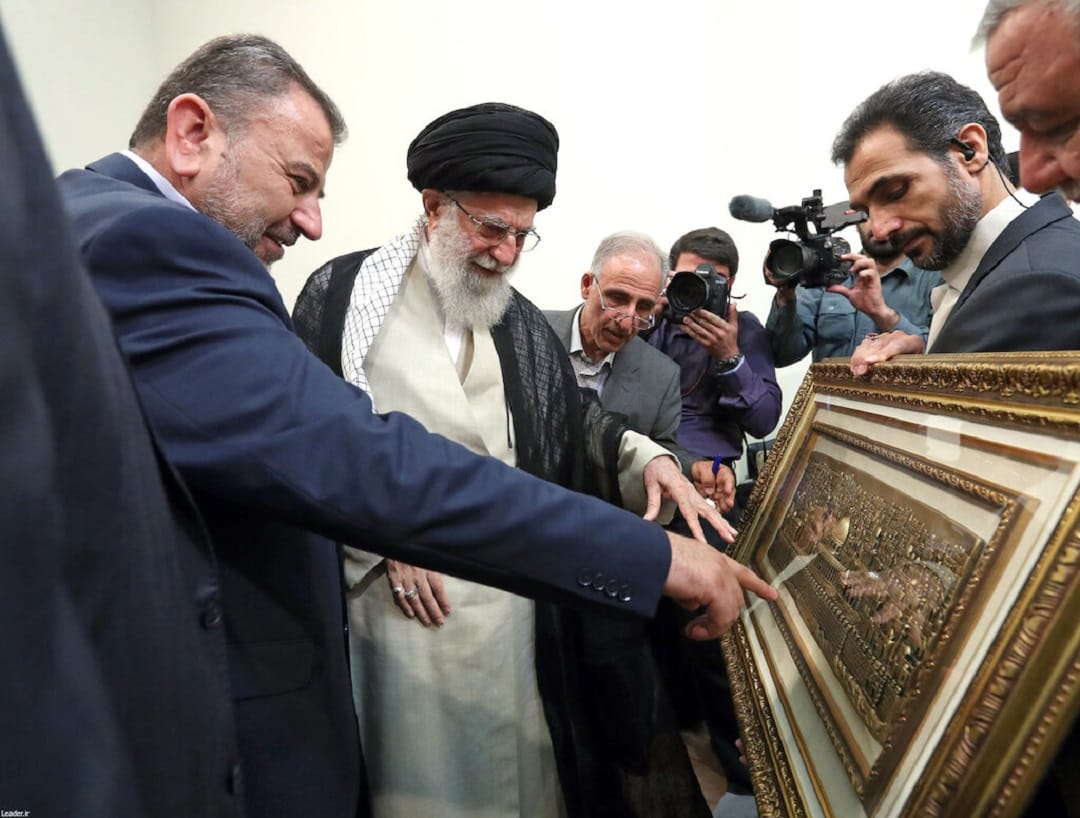 Saleh al-Arouri, the Deputy Chairman of the political office of the Palestinian Islamic Resistance Movement (Hamas) and his entourage met with Ayatollah Khamenei — the Leader of the Islamic Revolution — this morning, 22 July 2019. english.khamenei.ir
Briefing Note / Middle East & North Africa 09 August 2019

6 August: President Rouhani asserts that “if the U.S. really wants to negotiate, it must lift all sanctions before any action is taken”.

8 August: Incoming head of INSTEX withdraws from the post.

8 August: President Trump tweets that the Iranians “want desperately to talk to the U.S., but are given mixed signals from all those purporting to represent us… nobody speaks for the U.S. but the U.S. itself”.

Why it matters: A core supposition of the “maximum pressure” strategy is that the economic impact of sanctions will drive Iran into changing its behaviour. As Secretary of State Mike Pompeo reiterated in a 6 August USA Today op-ed, an aim of U.S. policy is “to deprive the Iranian regime of the money it needs to support its destabilising activities”. While Iran’s overall resources have declined, historical precedent demonstrates – and if true, the alleged increase to Hamas would underscore – that Tehran conducts its policies based on threats and opportunities more than on the health or depletion of its treasury. As the USA Today’s editors put it on the same day, “Trump’s erratic Iran policy has allowed the clerics to scapegoat Washington, provoked Tehran’s aggressive pushback, established that America won’t keep its word, and potentially reignited a nuclear crisis that had been quelled at least into the next decade. If that’s winning, we’d hate to see what losing looks like”.

A senior Iranian military official on 5 August indicated that “our missile power… deters any regional and extra-regional acts of aggression, and the range of the missiles is also increasing constantly”.

Why it matters: Iran has inferior conventional military capabilities compared with its neighbours, let alone the U.S.; ballistic missiles provide what Iran claims to be its sole reliable conventional military deterrent. Occasional tests, the most recent of which reportedly took place in late July, have been a point of contention not just between Iran and the U.S. but between Iran and some European governments as well. Iran has generally rebuffed recent attempts to put its missile program on the negotiating table, and its potential acquisition or export of conventional arms could become a growing point of contention as a UN Security Council-imposed embargo should, under the terms of the JCPOA, be lifted in October 2020. At that point, as President Rouhani noted on 1 August, “we can start buying or selling any kinds of weapons that we want”.

Iranian Foreign Minister Javad Zarif on 5 August claimed that the U.S. blacklisted him after he turned down a meeting with President Trump.

Why it matters: Earlier this year, Zarif temporarily resigned after not receiving an invitation from the IRGC to attend meetings between senior Iranian officials and Bashar al-Assad in Tehran; now his apparent refusal to accept one in Washington has seen the Islamic Republic’s political and military elite close ranks behind the country’s oft-embattled top diplomat. The Revolutionary Guards on 1 August issued a statement thanking Zarif for his services, and on 5 August Qods force commander Qassem Soleimani paid a visit to the foreign ministry with warm words for the “chief of the country’s foreign policy”. Iranian hardliners have long criticised the Rouhani administration, and Zarif in particular, over the JCPOA and engagement with Europe. The designation may briefly dampen this, but it is likely to pick up again in the run-up to Iran’s February 2020 parliamentary elections.

30 August: Next quarterly IAEA report on the JCPOA’s implementation.

6 September: Iran’s next announced deadline for reducing its JCPOA commitments if it is not satisfied with Europe’s steps. 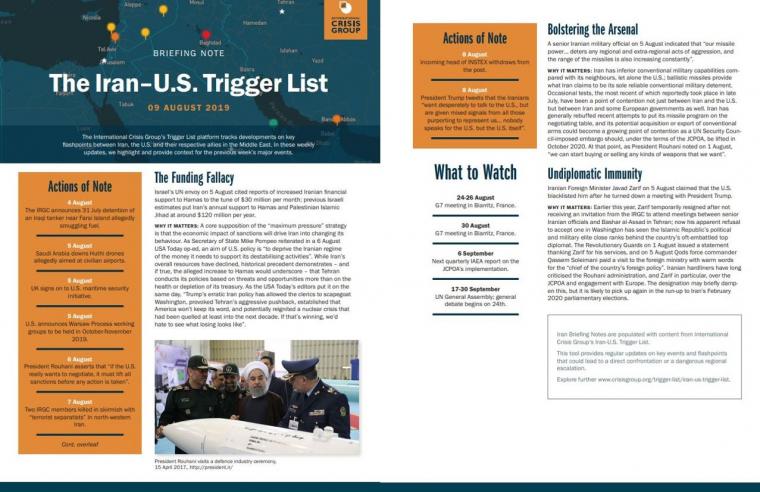