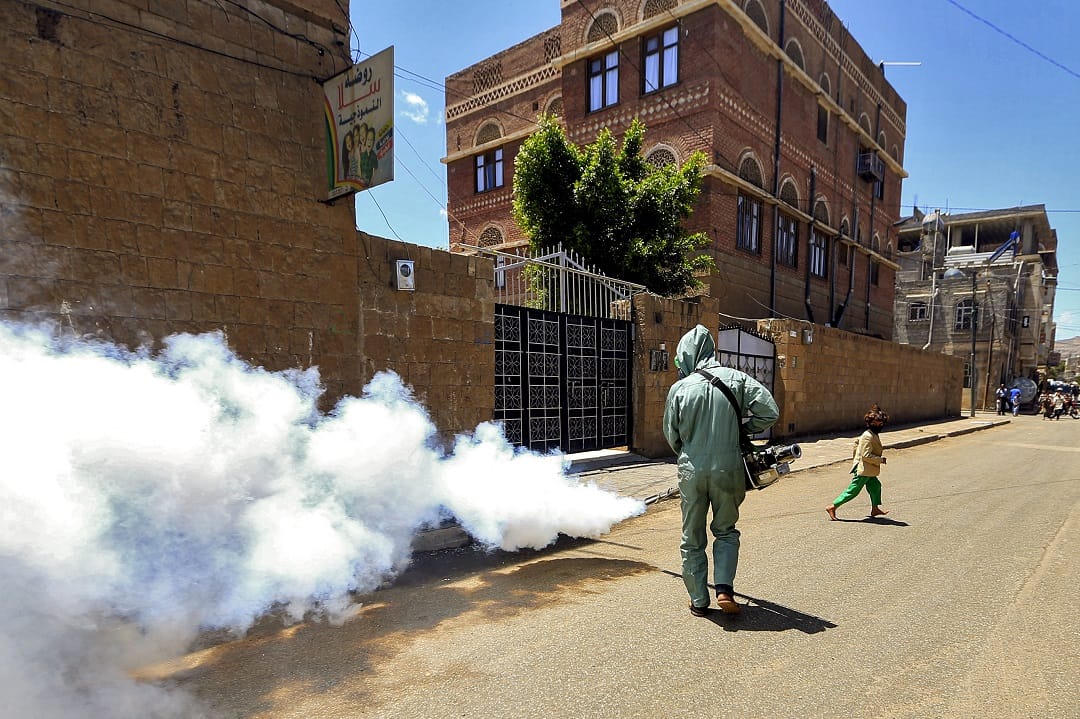 A Coronavirus Ceasefire Offers a Way Out for War-torn Yemen

The UN has called for a freeze in fighting in Yemen to prepare for a COVID-19 outbreak and preserve an opportunity to end the war. The Huthis, Yemeni government, other key armed actors and Saudi Arabia have all agreed. They should immediately carry out the proposal.

When Saudi Arabia intervened in Yemen’s civil war in March 2015, the country was already the poorest in the Arab world. Five years later, it has become one of the most poverty-stricken places on the planet. Some 24 of its 28 million people need some form of aid and, by some estimates, more than 112,000 people have died as a direct consequence of the war. Countless more have succumbed to preventable diseases or outright hunger, in part a consequence of the economic warfare waged by all parties to the conflict and their wilful destruction of vital infrastructure, including hospitals.

[... the outbreak] is likely to wreak havoc on a people already weakened by hunger and dependent on a healthcare system on the verge of collapse.

Now the COVID-19 pandemic threatens to further decimate a vulnerable population. No case has yet been confirmed, but when an outbreak comes, it is likely to wreak havoc on a people already weakened by hunger and dependent on a healthcare system on the verge of collapse. Less than 50 per cent of Yemen’s hospitals and clinics are operating at anything like full capacity, and most lack qualified staff, medicine and often electricity. To avert a disaster, on 25 March, UN Secretary-General António Guterres called for a ceasefire in Yemen to allow for UN-led mediation to end the war and help prevent an outbreak of COVID-19. The parties should seize this opportunity, without conditions.

To make its initiative stick, the UN will need help from external actors, principally Saudi Arabia and the U.S. In recent months, the Saudis have taken the lead in trying to end to a war of which they are a part, but it should be clear by now that they cannot go it alone. Throughout the conflict, its protagonists, the Saudis included, have treated compromise as synonymous with defeat. If the U.S. wants the war to end and to extricate its Saudi ally, a COVID-19 ceasefire could offer a perfect opportunity.

On the Yemen side of the equation, the Huthis, the government and Yemen’s numerous additional armed groups will have to put their differences aside, stop the fighting and coordinate efforts to mitigate COVID-19’s deadly spread if they want to prove that they are fighting on behalf of ordinary Yemenis. The question is whether they believe a humanitarian cessation of hostilities is a fate worse than the terrible toll the virus will almost certainly take.

The urgency of the COVID-19 crisis should convince the warring sides, their external sponsors and the international community to take a leap of faith.

The UN’s Yemen envoy, Martin Griffiths, hopes to secure a nationwide ceasefire at a meeting with the Huthis and the government in the coming days that is also to be attended by representatives of the Saudi-led coalition. He will also try to secure the parties’ cooperation in a national plan to prepare for a COVID-19 outbreak and kick-start a series of confidence-building measures. If the ceasefire can be managed and confidence built, UN officials would like to use the initiative as a launching pad for a political process to end the war.

The urgency of the COVID-19 crisis should convince the warring sides, their external sponsors and the international community to take a leap of faith. The principal players have welcomed Guterres’ call for a cessation of hostilities and renewed focus on a political settlement to end the war in order to mitigate the consequences of a potential outbreak. Now they need to accept what their acquiescence means: halting the fighting now rather than engaging in prolonged negotiations over the terms and conditions for a ceasefire. That means, in other words, breaking with precedent and avoiding the pattern of past rounds of UN negotiations when the Huthis, government and Saudis sought to front-load the cost of any agreement for their rivals and made maximalist demands.

Now is not the time to rehash the same old issues but to overcome them. All parties to the conflict should accept, unconditionally, a freeze in fighting nationwide in accordance with the Secretary-General’s call, and work in good faith to develop a COVID-19 response plan without delay. The UN envoy, with the help of the U.S. and other international stakeholders, should as a matter of priority take the lead in facilitating the implementation of the freeze and coordinating political support for a coronavirus emergency plan, which will necessarily include unfettered access to ports of entry for much-needed medical and humanitarian assistance, as well as commercial goods.

Such an agreement should include cooperation and buy-in from all main combatants, including the Huthis, the government, southern secessionists and anti-Huthi forces on the Red Sea coast, all of whom have welcomed the ceasefire call. Measures including the partial reopening of Sanaa airport, easing of restrictions on shipments entering Hodeida port, and unblocking of roads to the besieged city of Taiz are vital in order to both alleviate the impact of five years of economic warfare on ordinary Yemenis and build trust among the parties in preparation for a national political process.

How quickly the parties agree to the COVID-19 ceasefire plan and then carry it out will be the proof of the parties’ commitment to the Yemeni people they purport to represent and/or protect. They need to pass this test.