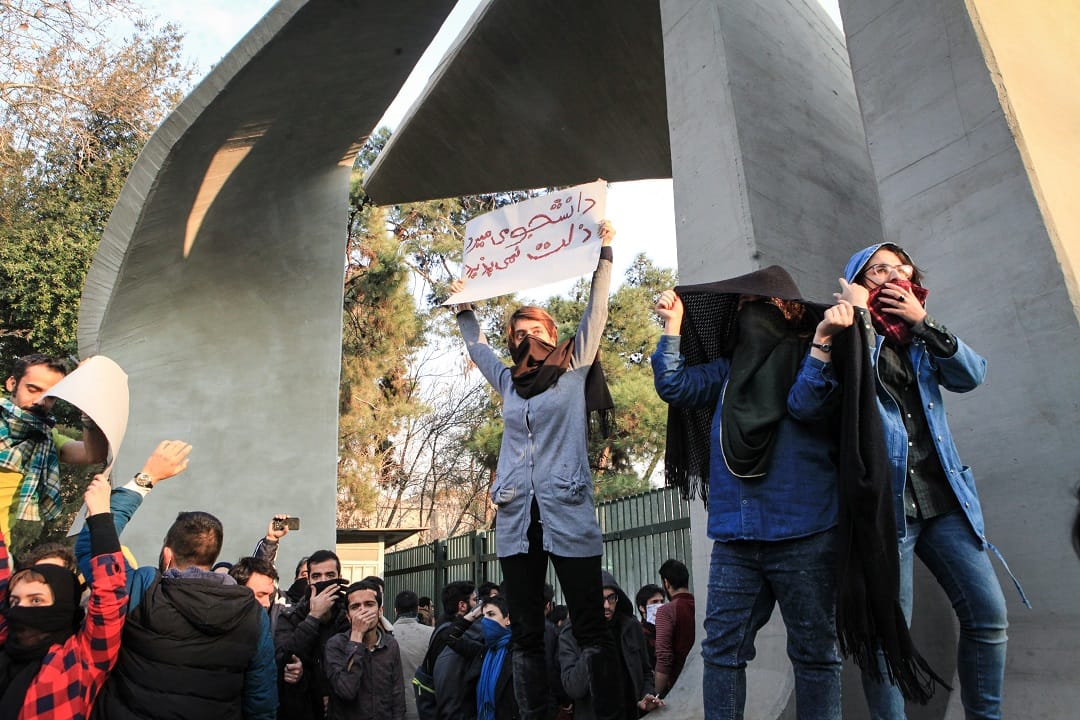 How Iran’s President Rouhani Can Turn Crisis into Opportunity

Daily street protests across Iran since 28 December 2017 have pitted many young Iranians against the government, but the state’s response is revealing deep fractures in the political establishment. To outflank both the unrest and his political opponents, President Rouhani’s best option is to address head-on the drivers of the protests and pursue popular reform.

Manifold reasons lie behind Iran’s ongoing protests, but the immediate trigger appears to be widespread disgruntlement over the country’s economic performance, especially cuts in President Hassan Rouhani’s new budget. Neither a revolution nor a political movement, the crisis is an explosion of the Iranian people’s pent-up frustrations over economic and political stagnation.

Beyond a struggle between state and society – or a standoff between security forces and political figures on the one hand, and young, working-class, unemployed citizens on the other – the demonstrations are putting on full display the fault lines that also divide Iran’s political establishment.

That the protests originated on 28 December in Mashhad, a bastion of Rouhani’s opponents and Supreme Leader Ali Khamenei’s hometown, is highly significant. Hardliners and conservatives initially welcomed the unrest in the holy city, showcasing the way that elite factionalism has worsened to the point that some of Rouhani’s opponents favour instability over siding with his political agenda.

[President Rouhani has] a unique opportunity to pivot himself away from being the demonstrators’ target to becoming their champion for reform.

The lack of uniformity in the government’s response to the protests has also highlighted these divisions. Rouhani initially struck a much softer tone than many other establishment figures, asserting people’s right to peaceful protest, and admitting that protesters are not lackeys of foreign powers but people who are suffering economically and seeking a more open society. In stark contrast, others – including Khamenei – have publicly blamed unrest on undefined external forces rather than legitimate grievances.

A Champion for Change

In part, the unrest stems from widespread discontent directed at Rouhani’s inability to activate the economic dividends of the Joint Comprehensive Plan of Action (JCPOA), Iran’s 2015 nuclear deal with the P5+1/E3+3. It may seem counterintuitive, but the clear new distance between Rouhani and his conservative critics offers the former a unique opportunity to pivot himself away from being the demonstrators’ target to becoming their champion for reform.

Rouhani can leverage public discontent to push the political establishment toward structural changes so fervently desired by the population. The chance that he can successfully take advantage of this dynamic is made greater by the way many Iranians are wary of taking part in the protests, even though sympathetic to the demands raised in them. Specifically, he could submit to parliament a package of major reforms, including constitutional amendments to empower elected institutions and a timetable for implementing them. If his reform package is blocked, it will be clear to the Iranian people where the problem lies, positioning Rouhani as a motor for change rather than a bulwark against it.

Rouhani has nothing to lose by taking a bold step.

Getting there will require resisting the temptation of pursuing superficial reforms. Shy steps, like the ones reformists are suggesting at present, are not going to cut it with the protesters. Rouhani has nothing to lose by taking a bold step. Without empowering the government and the parliament, and reining in tutelary bodies, like the unelected Guardian Council, vested interests in the status quo are bound to thwart structural economic reforms that are needed to fight corruption and open Iran up to the world market.

The reality is that Rouhani over-promised and under-delivered on the July 2015 nuclear agreement, which many Iranians hoped would bring speedy economic rewards. Five months after the JCPOA was signed, Crisis Group warned that rapid economic transformation was unlikely, as foreign firms and financial institutions were always likely to find it difficult to overcome deeply-entrenched hesitancy regarding doing business with Iran. Despite a number of marquee deals and recovering oil sales, the government has failed to significantly redress issues of unemployment, corruption and income inequality.

As the crisis continues, the more violent alternative left open to the Iranian government will not address the underlying causes of unrest. While the state security apparatus might crush the protesters, as it has done at least once every decade since 1979, it cannot eliminate the perennial popular demand for fundamental change, which last reared its head in 2009.

If [Rouhani's] reform package is blocked, it will be clear to the Iranian people where the problem lies, positioning Rouhani as a motor for change rather than a bulwark against it.

Today’s unrest is different from the 2009 protests, not least because protesters are not asking for U.S. help. Demonstrations are more geographically scattered than during the 2009 revolt, and they seem to involve young and unemployed Iranians more than the middle class. One interior ministry official estimated that 90 per cent of those arrested in the first few days of the most recent unrest were younger than 25.

Rouhani’s initial response to the unrest seemed to acknowledge the notion that the crisis offers an opportunity. Whether he will use it is another question. Without real reform, domestic turmoil is likely to continue and will also afford U.S. President Donald Trump a new chance to kill the JCPOA. Trump will have to decide on 12 January 2018 whether he wants to extend sanctions relief and remain party to the JCPOA. A violent crackdown by Iran’s security forces could give him justification for not waiving sanctions, or even imposing new ones.