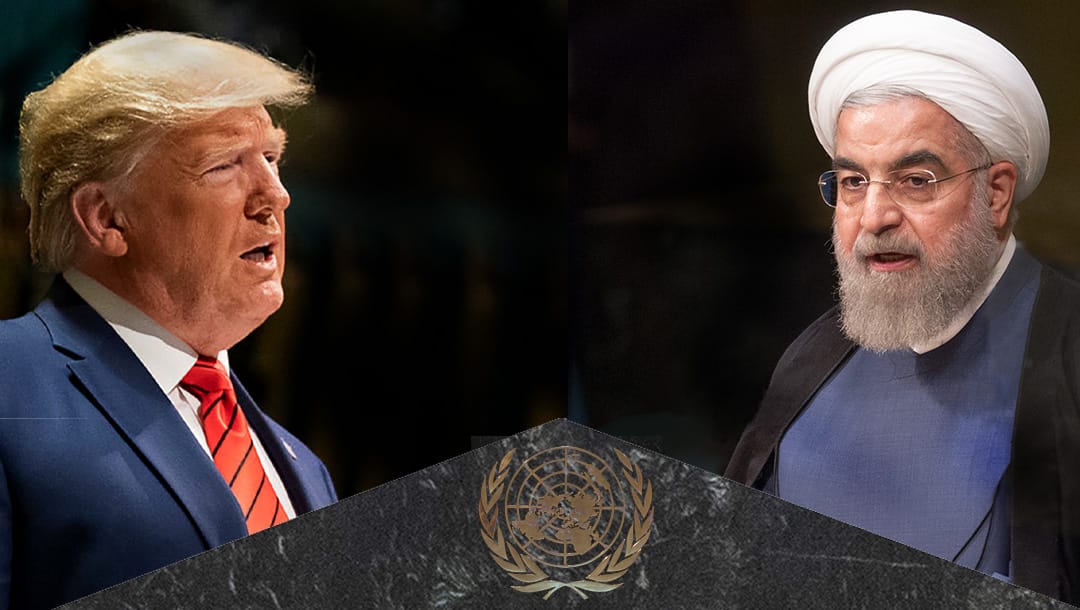 Iran Briefing Notes, of which this is the last of a series of 15 that began on 20 June 2019, highlight and provide context for major events featured on International Crisis Group’s Iran-U.S. Trigger List. This infographic resource tracks key flashpoints between Iran, the U.S. and their respective allies in the Middle East.

24 September: U.S. embassy in Baghdad issues security alert warning of “heightened tensions in the region” a day after rockets were launched toward Green Zone.

24 September: President Donald Trump tells UN General Assembly that “as long as Iran’s menacing behaviour continues, sanctions will not be lifted; they will be tightened”.

25 September: In UN General Assembly address, President Hassan Rouhani tells U.S. to “stop the sanctions so as to open the way for the start of negotiations”.

25 September: President Trump issues a proclamation “to restrict and suspend the entry into the U.S., as immigrants or non-immigrants, of senior government officials of Iran, and their immediate family members”.

26 September: Supreme Leader Ali Khamenei contends that the Europeans “cannot be trusted at all, as they have betrayed all their commitments”.

Ships in the Night

French President Emmanuel Macron on 24 September asserted that “the conditions … for a rapid return to negotiations have been created”. “It is now up to the Iranians and the U.S. to seize these conditions and work together to relaunch momentum”, he added.

Why it matters: Presidents Rouhani and Trump spent much of the week within a few New York city blocks from each other, but Iran and the U.S. remained poles apart on a diplomatic breakthrough. Despite efforts by President Macron and others to facilitate a direct and unprecedented meeting between the two leaders, the core conundrum, apparent for some time, remained unresolved: Tehran expects a financial reprieve before engaging in discussions that could lead to a meeting between the two presidents, while President Trump wants a meeting with his Iranian counterpart as the first step toward eventual sanctions relief. So long as neither side is willing to budge, their respective strategies – in Iran’s case, flexing its muscles on the nuclear and regional fronts; in Washington’s, the application of maximum economic coercion – remain a recipe for escalating tension. Yet the non-occurrence of a tête-a-tête ought not discourage fresh attempts to fashion a tactical de-escalation.

In remarks after chairing a 25 September JCPOA ministerial meeting, EU High Representative Federica Mogherini stated that “there is a will to try and preserve the deal”, but also acknowledged that “it is increasingly difficult to do it”.

Why it matters: Iran’s incremental breaches of the 2015 nuclear deal, and Europe’s limited capacity to provide the economic benefits the agreement was meant to deliver, are sorely testing its core bargain. The most recent EU-Iran trade data illustrates the challenge in offsetting the impact of unilateral U.S. sanctions: for the period from January to July 2019, Iran’s exports collapsed by almost 94 per cent compared to last year; total trade was a quarter of 2018 levels. Furthermore, while the E3 (France, Germany and the UK) have thus far generally managed to keep the nuclear portfolio distinct from their concerns on other aspects of Iranian regional behaviour, the two sides traded barbs over Iranian culpability in the 14 September Aramco attack, which could portend a further straining of the thread by which the JCPOA still hangs.

This briefing note series was conceived and launched in June as a supplement to Crisis Group’s coverage and analysis of U.S.-Iran tensions. What was originally envisioned as a temporary endeavour has, owing to the rapidity and significance of developments on the regional and nuclear fronts, continued over fifteen editions. This is the final instalment. Yet we will continue to track developments on a daily basis through the Trigger List platform, as well as longer-form Crisis Group publications, and will introduce new formats as events dictate.