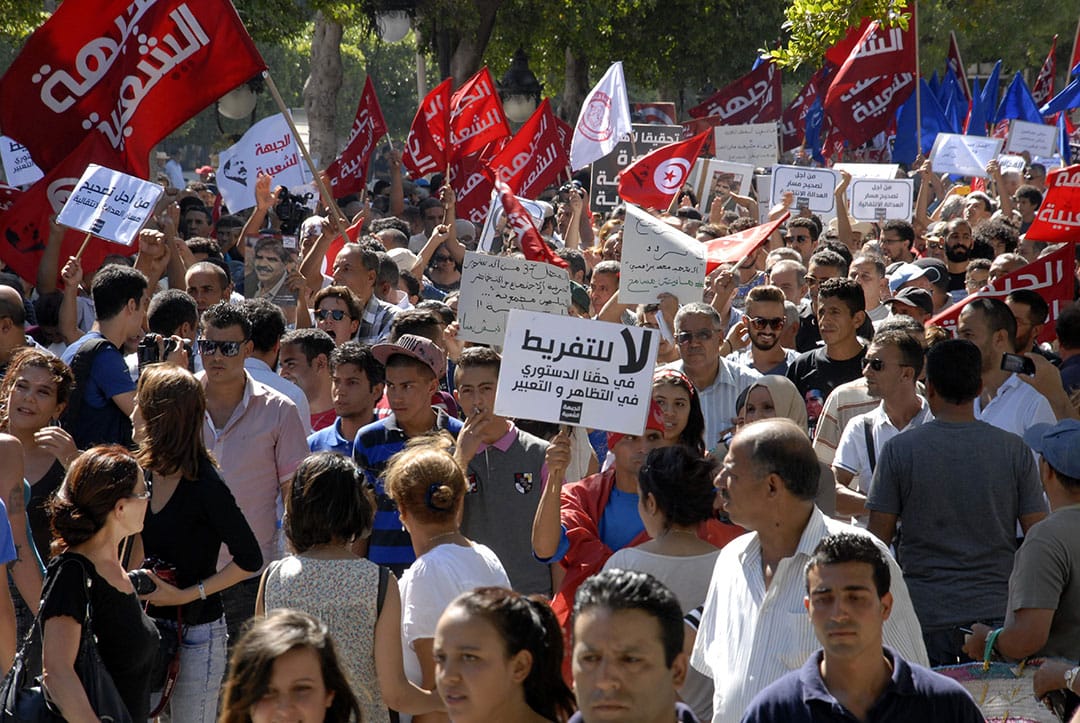 Tunisians hold placards during a protest against a controversial draft law on amnesty for corruption offences in the capital Tunis, 12 September 2015. AFP PHOTO/Sofienne Hamdaoi
Report 168 / Middle East & North Africa 03 May 2016

Tunisia: Transitional Justice and the Fight Against Corruption

Polarisation over transitional justice after the 2011 fall of Tunisia’s old regime is obstructing basic progress. Accounting for past actions cannot include the early idea of “revolutionary justice”, but can become a tool to reconcile citizens, tackle corruption and give the economy a much needed new impetus.

Political tensions between supporters and opponents of Tunisia’s transitional justice process and of its application in the economic realm are delaying the implementation of policies necessary to stimulate the economy and tackle corruption. The process’ supporters view it as essential to keeping the revolutionary flame alive, reestablishing citizens’ trust in state institutions and promoting the rule of law, equitable development and reconciliation. From their side, its opponents see it as a remnant of a past political context and an obstacle to economic recovery. Compromises will be needed to reconcile these two camps as well as strengthen government efforts to root out corruption and economically integrate regions most neglected under the former regime.

After the fall of President Zine al-Abidine Ben Ali on 14 January 2011, Tunisia’s new political actors implemented a politicised, often arbitrary and thus haphazard, form of justice; comprising a variety of ad hoc and extrajudicial measures, this process could be described as “revolutionary justice”. The former regime’s victims were able to receive material and symbolic reparations, while businessmen believed to have been implicated in corruption had assets seized, faced trials (many of which are still pending) or were blackmailed.

In December 2013, a Truth and Dignity Commission (Instance vérité et dignité, IVD) was established to implement a comprehensive transitional justice mechanism anchored in the law, informed by the evolution of transitional justice theory and its use in other countries, and enshrined in Tunisia’s new constitution (enacted in January 2014). The Troïka government in power at the time (composed of political forces in opposition or in exile during the Ben Ali era) supported the move.

After Tunisia’s political landscape changed in December 2014, official support for the IVD began to crumble. The newly consecrated parliamentary and governmental alliance between Nida Tounes, a secular movement that has given a second political life to former regime members, and the Islamist party An-Nahda (a former Troïka member) created a political balance that has favoured selective amnesia over remembrance.

During the second half of 2015, public debate about the transitional justice process became both more prominent as well as more polarised. In July, President Béji Caïd Essebsi proposed an economic reconciliation bill reducing the IVD’s prerogatives. The most determined opponents of the bill, which has been shelved for now but could yet re-emerge in a new form, argue it would absolve those implicated in corruption and thus underscore victory by the “counter-revolution”. Use of this latter term points to the revival of Tunisia’s traditional socio-economic elite, mainly hailing from the capital and the east coast, which was weakened by the 2010-2011 revolution.

The bill’s supporters – including An-Nahda, which is torn between its revolutionary ideals as a former opposition movement and its determination to preserve the fragile coalition with Nida Tounes – view the implementation of transitional justice measures as a threat to stability. They want the IVD to abandon its pursuit of corruption cases stemming from the 1955-2013 period and instead focus exclusively on human rights violations.

Both sides must make concessions if this struggle is to be overcome. First, it will be necessary to resolve the misunderstanding that derives from the association of transitional justice – and the legitimate role it can play in relation to justice and reconciliation – with the ad hoc measures adopted during the “revolutionary justice” period, which some groups deem a witch hunt against businessmen and senior civil servants.

Second, given the deteriorating economic situation, the country cannot afford to wait for the IVD’s final recommendations in 2018-2019. It would be better for the government to support a law regularising under certain conditions the status of Tunisians implicated in corruption and tax evasion. Instead of entering into conciliation procedures that could create new opportunities for cronyism and blackmail, these Tunisians would have to entrust the inventory of their assets to certified public accountants, who would be held responsible for any false declarations, as a basis for a tax assessment and back payment.

To restart the economy, businessmen must be able to free themselves from the “revolutionary justice” measures which they claim have victimised them for the past several years. State agents accused of embezzlement under the previous regime should also be able to regularise their status. In exchange, both the presidency and the government should actively support the collaboration of other public institutions with the IVD, and ensure its activities, in particular its public hearings, are disseminated.

In parallel, the government should quickly formulate and implement measures to fight cronyism, nepotism and corruption; prioritise dialogue between regions, specifically between entrepreneurs in border areas, the Sahel (northern part of the east coast) and the capital; and institute new transparency mechanisms for public tenders.

The aim should not be to modify the transitional justice mechanism rooted in the January 2014 constitution but to find a middle ground that increases political elites’ confidence in it, so that the IVD’s work can take place in a more auspicious environment. Contrary to a widespread preconception, encouraging the implementation of the transitional justice process is in the current political class’s interest. Renewing political support for it and accompanying it with immediate reforms to prevent the spread of corruption would reduce the risks of polarisation and help prevent Tunisians’ complete disillusionment with politics.