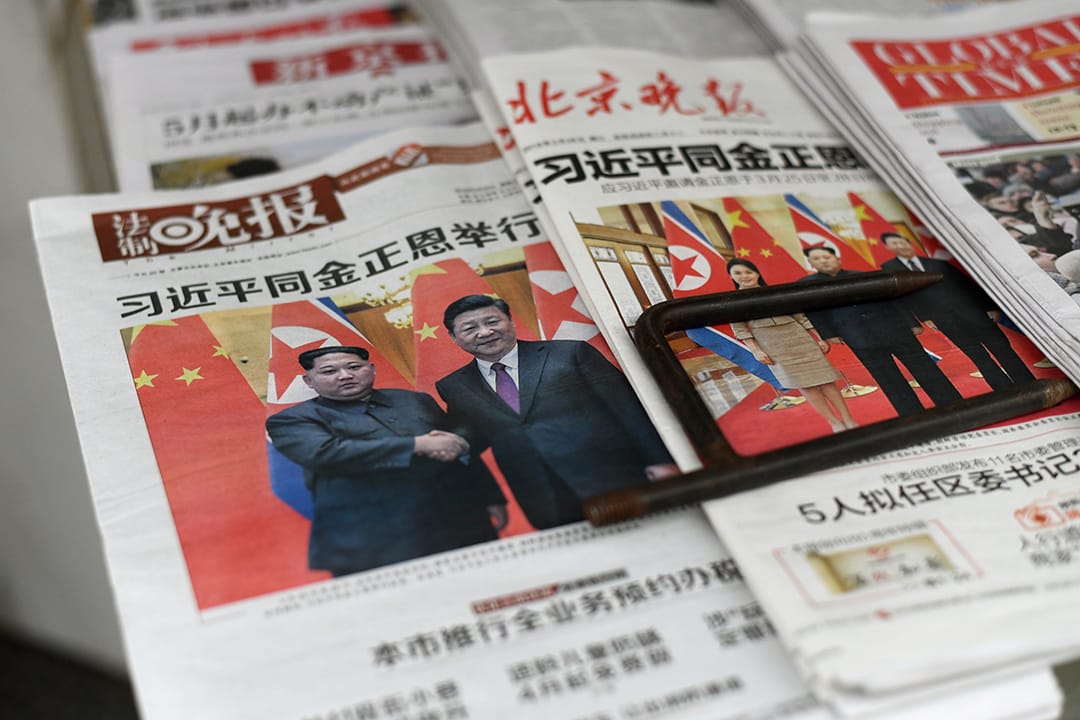 After weeks in which other actors have taken notable steps towards defusing fears of war over North Korea’s nuclear and ballistic missile program, a China-North Korea summit held 26-27 March in Beijing has reasserted China’s pivotal role in efforts to find a solution to the nuclear crisis.

For a few weeks in March, it appeared as though China, preoccupied with its own internal political wrangling and reforms, might have been sidelined by the whirlwind Korean Olympic diplomacy. Kim Jong-un’s sister descended upon the Pyeongchang winter games, envoys from Moon Jae-in dined with Kim himself in the Democratic People's Republic of Korea (DPRK) capital, and finally, those same South Korean envoys revealed that U.S. President Donald Trump had accepted an invitation to meet Kim Jong-un “by May”.

But any illusion of China being bypassed vanished with Kim Jong-un’s visit.

Before the meeting, Chinese officials and analysts had mostly been confident that China would have to be involved in any effort to resolve the Korean peninsula dispute. Some said Beijing could calmly observe and express support for negotiations and the implementation of the “freeze-for-freeze” approach it has advocated for some time (Crisis Group also supports a variant of freeze-for-freeze which de facto has been observed since the beginning of January). Any kind of negotiation seemed preferable to the chaos or war looming as alternatives.

Even so, many worried privately that if China were excluded from talks, its interests could be disregarded. As news broke of the cabinet shake-up in Washington, there was a different kind of anxiety that hawks such as John Bolton, who have long advocated for war against North Korea, might set up talks to fail and create a predicate for kinetic solutions. Evidently, Xi Jinping wanted to take no chances and swiftly hosted Kim. But though diplomatic protocol required that China issue the invitation, it is debatable which side wanted it more. Consulting Beijing was in Kim’s interest, too.

Meeting China’s leader before any other is a Kim family tradition that, as blanket coverage of the meeting on domestic North Korean television indicates, provides a wellspring of domestic legitimacy for a North Korean leader. In 2000, Kim Jong-un’s father Kim Jong-il took the same train journey to Beijing, marking the end of an often-violent process of power consolidation in Pyongyang, and the beginning of a period of energetic diplomacy that would include summits with the leaders of South Korea, then Russia, and finally Japan. Images of Kim meeting Jiang Zemin as an equal were publicised around the world. Appearing with Xi Jinping does the same for Kim Jong-un, burnishing his stature at home and providing momentum for meetings first with President Moon Jae-in at the Korean War truce village of Panmunjom on 27 April, and later, if it goes ahead, with President Trump. With one such meeting under Kim’s belt, that now looks more likely.

China is the link in the sanctions enforcement chain that can be most easily broken.

North Korea’s ties with Beijing have frayed in recent years. By starting to repair them, Kim polishes his new charm offensive, potentially disrupts Sino-American and Sino-South Korean coordination, and might win economic inducements and quiet, partial relief from sanctions. From Kim’s perspective, China is the link in the sanctions enforcement chain that can be most easily broken. While the current South Korean government may be keen to give economic incentives to persuade North Korea to compromise, it faces much higher political hurdles to do so and does not have nearly such deep pockets.

For China, the timing is opportune. There has been extensive, divisive debate in its policy circles about how to handle North Korea, leading to a degree of paralysis. Beijing went along with wave after wave of Security Council sanctions primarily because Pyongyang was flagrantly disregarding its security interests, but also because they were the logical continuation of a tolerable status quo and the path of least resistance under relentless American pressure. And President Xi has been preoccupied with a series of Communist Party and government meetings and manoeuvres that have formalised and perpetuated his grip on power and launched a massive government shake-up.

Now Xi, with his authority unquestioned, his foreign policy team in place, and a DPRK-Republic of Korea (ROK) summit imminent, has seized the moment to reassert China’s pivotal role in managing inter-Korean tensions. Souring relations and a brewing trade war with the U.S. probably also shaped his calculus. North Korea is far from being China’s puppet, but it is an important card Beijing has to play in its intensifying strategic competition with Washington.

In an unusually detailed report, China’s state news agency Xinhua said the meeting was “unofficial” and a “strategic choice”, and that Kim came to Beijing out of “moral responsibility” – signalling that relations are frosty but fixable. According to that report, Xi also told Kim what he now must do if he wants China’s help: meet regularly at the level of decision-makers, communicate early and often, prioritise economic development, promote people-to-people exchanges, and agree to denuclearisation of the Korean peninsula as a long-term goal. One Chinese proposal not in Xinhua’s report may have been to host some forthcoming meetings. Symbolically and practically, that would cement the Middle Kingdom’s position.

If Xi gets his way, by year’s end Korean peninsula talks could be back in a dialogue framework shaped by China. North Korea would become a problem to be managed but not an imminent threat, denuclearisation again would be a distant political goal, and sanctions would evolve into an adjustable valve to manage pressure on Pyongyang. Order under heaven, from China’s perspective. But while that may be Beijing’s preferred route, the journey ahead is far less certain than that travelled by the train that brought the DPRK’s ruler to his first summit, and many factors could knock diplomacy off the rails, not least Kim Jong-un and Donald Trump themselves.

A shorter version of this commentary appeared on ChinaFile as part of “Kim Jong-un Visits Beijing – A ChinaFile Conversation”.